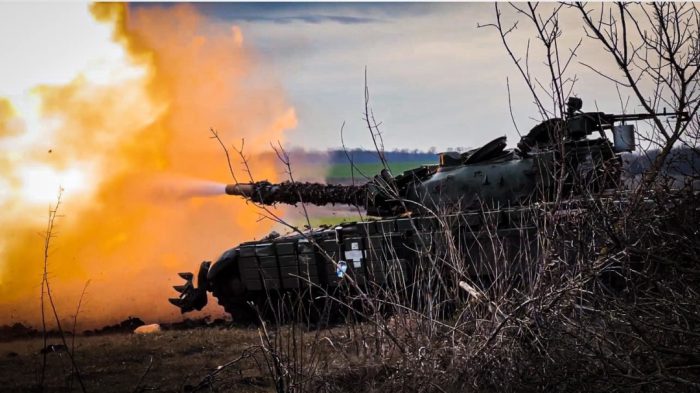 Positional fighting continues on the frontline. Russian troops are focusing their efforts on trying to capture the town of Bakhmut in Donetsk region (hostilities around the town have been ongoing since May 2022). At the same time, they are strengthening defenses in the south and preparing for new large-scale missile attacks on Ukraine’s critical infrastructure.

On November 29, the head of the Luhansk Regional Military Administration Serhii Haidai, referring to the General Staff of the Armed Forces of Ukraine, reported about the defeat of the Russian troops in Svatove.

Russian troops continue attempting to advance in the area of Bakhmut, Avdiivka and Vuhledar. Local successes of Russian troops were recorded near Bakhmut, however analysts of the Institute for War Studies deny the statements of Russian sources about the operational encirclement of the town.

The shelling of civilian infrastructure continues, as a result of which at least 5 people were killed and 19 people were wounded in the Donetsk region on November 28–30.

Ukrainian Armed Forces continue to keep under fire control the transport infrastructure used by Russian troops to deliver military equipment and weapons. In particular, on November 28 the Defense Forces managed to damage a railway bridge near Starobohdanivka in Zaporizhzhia region. The General Staff of the Armed Forces of Ukraine reports significant enemy losses in the Zaporizhzhia sector on November 28-29. On the night of November 30 explosions were recorded at the base of Russian troops near Melitopol.

On the night of November 30, Russian troops struck at a critical infrastructure facility in Zaporizhzhia district, damaging a gas distribution point.

Russian troops are turning the left bank of the Dnipro river in Kherson region into a fortified area. In general, satellite images show dozens of separate and systematized defense units that block the main transport routes and are focused on countering the offensive from the west. The deportation of civilians from the territories where the Russian military is building up defenses is underway.

On the night of November 29, Russian troops fired 4 missiles at Dnipro. As a result, a fire broke out at one of the city’s enterprises.

Constant artillery shelling of the territories of Nikopol and Marhanets communities in the Dnipropetrovsk region, as well as the border areas of Sumy region, continues. On 30 November a hospital building was damaged in Sumy region, and a child was killed as a result of the shelling.

The Office of the United Nations High Commissioner for Human Rights updated the figures on civilian casualties as a result of the full-scale Russian invasion of Ukraine. As of November 28, confirmed casualties amounted to 17,023 people (6,655 killed, 10,368 wounded). According to the Prosecutor General’s Office, as of the morning of November 30, the number of children in Ukraine affected by the full-scale Russian invasion increased to 1,292 (440 children killed, 852 injured). According to the governmental platform Children of War, as of November 30, 12340 children were deported, 330 went missing.

The forced deportation of people was reported by the head of the regional military administration of Mykolaiv region Vitalii Kim. According to him, the Russian military forcibly deported about 37 residents of the settlements of the region, which are located on the Kinburn Spit.

The consequences of Russian missile attacks on Ukraine’s critical infrastructure threaten the humanitarian situation. For example, a military emergency was declared in Ladyzhyn (Vinnytsia region) due to the shortage of heating caused by the attacks against the Ladyzhyn thermal power plant. The situation with electricity supply in Uman (Cherkasy region) remains critical due to the shutdown of some power units of the South Ukrainian NPP.

Evacuation of Ukrainian citizens from particularly dangerous areas near the front line continues. In particular, over 2.5 thousand people have already evacuated to safe places from Kherson region.

Crimes of the Russian army in the de-occupied territories of Ukraine continue to be recorded. The body of Ukrainian writer Volodymyr Vakulenko was identified among the dead civilians in Kharkiv region. DNA examination confirmed that he was abducted and killed by Russian military near Izium during the temporary occupation of Kharkiv region. Law enforcers exhumed fragments of bodies of 5 civilians of Izium district of Kharkiv region: all the dead were victims of aerial bombardment; among them was a 2-year-old child.

In the village of Pravdyne (Kherson region) law enforcement officers exhumed the bodies of 7 civilians who were shot during the occupation. Another war crime committed by the Russian military in Kherson region in March was also documented. They shot a car with 2 civilians and drove over it with a tank.

New crimes of Russian troops are reported on the territories that remain occupied. Near Nova Kakhovka on the left bank of Kherson region a deacon of the local Evangelical church and his son, who were kidnapped by Russian troops on November 22, were found dead. In total, 38 criminal proceedings were opened on November 29 over war crimes committed by the Russian military in Kherson region, including shelling of hospitals, residential areas, abduction and shooting of civilians, removal of property.

The threat of mines in the territory liberated from the Russian military remains relevant. In Snihurivka (Mykolaiv region) a civilian exploded on a mine that was planted in the basement of a multi-storey building.

Russian troops continue illegal seizure of Ukrainians’ homes in the temporarily occupied territories. According to the Skadovsk town council, as of November 28, more than 180 applications on the seizure of housing in the town were received. In most cases, the vacant housing is occupied by the Russian military, while there are cases of occupation by IDPs from the territory of Russia or local representatives of the occupation administration.

Ukraine continues to prepare additional tools to stabilize the energy system of Ukraine. In particular, on November 27, the State energy trader Energy Company of Ukraine carried out a test import of electricity from Romania. Before that, the ECU twice carried out test imports from Slovakia. It is worth noting that test supplies are necessary to check the technical feasibility of importing electricity from Europe if necessary.

The international community is intensifying its efforts to bring the Russian Federation to justice for war crimes on the territory of Ukraine. On November 29, Berlin hosted the first meeting of the G7 Justice Ministers with the participation of the Ukrainian side. The meeting ended with the adoption of the Berlin Declaration, the ministers agreed to closely coordinate their cooperation to investigate war crimes in Ukraine and bring the perpetrators to justice. German Federal Minister of Justice Marco Buschmann stated that “war crimes cannot go unpunished, regardless of who committed them and wherever they were committed.” In turn, Prosecutor General of Ukraine Andrii Kostin said that more than 18 states have already opened national investigations into Russia’s war crimes.

On November 30, European Commission President Ursula von der Leyen proposed to create a special tribunal under the auspices of the UN to investigate Russia’s actions in Ukraine. According to von der Leyen, the EU is ready to work with the international community to enlist the support of various states.

On November 29-30, Bucharest hosted a two-day meeting of NATO Foreign Ministers, where the allies discussed the most important issues of Euro-Atlantic security. As a result of the meeting, the North Atlantic Council adopted a statement condemning Russia’s actions on the territory of Ukraine, in particular the violation of territorial integrity and sovereignty, crimes against civilians, shelling of critical infrastructure, etc. The Ministers stated that it is the Russian Federation that bears full responsibility for this war and for the gross violation of international law, and NATO countries will continue to strengthen political and practical support for Ukraine. The Secretary General of the Alliance stated that “the best way to achieve peace in Ukraine is to provide military assistance from NATO to stop the Russian invasion and to have a strong position in future negotiations”.

The meeting was attended by Minister for Foreign Affairs of Ukraine Dmytro Kuleba, who informed Allies and partners about the priority needs of Ukraine in countering Russia’s war. On the sidelines of the meeting, Dmytro Kuleba held talks with the Foreign Ministers of Poland, Italy, Spain, the NATO Secretary General, and the U.S. Secretary of State.

In recent days, President of Ukraine Volodymyr Zelenskyi had phone conversations with Federal Chancellor of Germany Olaf Scholz and Prime Minister of the Netherlands Mark Rutte. The leaders discussed the implementation of the Ukrainian peace formula and the enhancement of defense assistance to protect Ukraine from Russian missile attacks.

On November 28, foreign ministers of seven European countries – Estonia, Finland, Iceland, Latvia, Lithuania, Norway and Sweden – visited Kyiv. This is the largest simultaneous visit of foreign partners to Ukraine since the beginning of the full-scale Russian invasion. In their joint statement, the Ministers condemned the attacks of the Russian Federation on the civilian population and critical infrastructure of Ukraine, and stated that Russia must immediately stop these actions. They also declared their readiness to stand by Ukraine until the full de-occupation of all territories, including Crimea.

The Council of the European Union adopted a decision according to which the violation of the sanctions regime is included in the list of “EU crimes” included in the Treaty on the Functioning of the EU. This step is aimed, in particular, at complicating the circumvention of sanctions restrictions imposed on Russia due to its aggression against Ukraine.

The German Parliament adopted a resolution recognizing the Holodomor of 1932-1933 as a genocide of the Ukrainian people. This decision is important in the context of fixing the responsibility of the political leadership of the Soviet Union for crimes against the Ukrainian people by the international community. This step, among other things, may contribute to the international recognition of the responsibility of the Russian Federation for crimes against humanity in Ukraine and their qualification as genocide.

International partners continue to provide Ukraine with military, humanitarian and economic assistance to strengthen its capacity to counter Russian attacks. Swedish Foreign Minister Tobias Billström announced the allocation of the largest package of defense and financial assistance in the history of bilateral relations. It includes ground-based air defense systems, ammunition, vehicles, various winter equipment and uniforms, as well as €270 million. Slovakia handed over 30 BMP-1 infantry fighting vehicles to Ukraine; France sent another LRU MLRS. The U.S. signed a $1.2 billion contract to produce six NASAMS anti-aircraft missile systems for Ukraine by the end of 2025.

The United States announced more than $53 million in equipment to repair and restore power grids and critical infrastructure in Ukraine due to Russian missile strikes. The Government of Lithuania approved the allocation of additional €13 million to Ukraine, in particular to restore energy infrastructure and support Ukrainian refugees. The Federal Government of Germany will provide short-term financial assistance to Ukraine for the repair of energy infrastructure in the amount of about €56 million, and will also deliver more than 350 generators.

An explosion occurred near the Ukrainian Embassy in Madrid, injuring an employee of the diplomatic mission. The explosives were contained in a letter addressed to the Ambassador of Ukraine to Spain.

Ukrainian law enforcement officers found Russian propaganda materials during searches of the facilities of the Ukrainian Orthodox Church (Moscow Patriarchate) in Ternopil and Ivano-Frankivsk regions. This provides additional evidence of the subversive activities of the Moscow-controlled church in Ukraine.