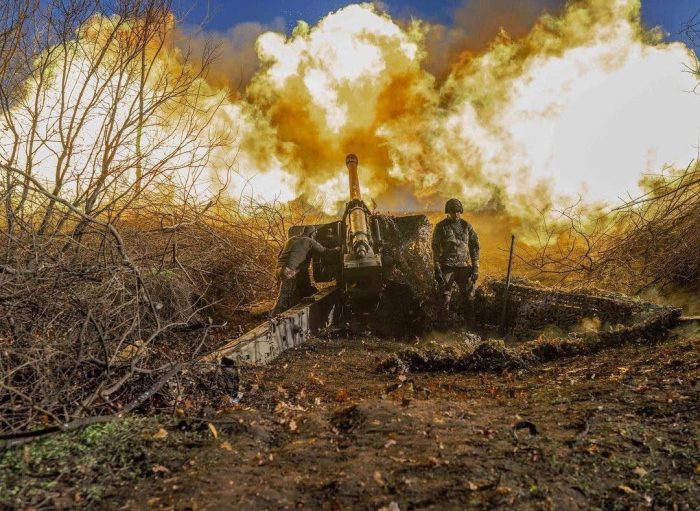 The situation on the frontline has not undergone any major changes. Positional fighting continues in the area of Svatove-Kreminna in the Luhansk region (where the Ukrainian Armed Forces are steadily advancing) and around Bakhmut in the Donetsk region (where Russian troops continue their attempts to surround and capture the town). Russian forces have refrained from massive missile attacks on the territory of Ukraine in recent days, but keep striking at the frontline and border regions.

Russian social media channels are carrying reports of explosions in areas of Engels and Dyagilevo – strategic bomber airfields inside Russia. On December 4, Ukroboronprom reported about final tests of attack UAV able to fly about 1,000 kilometers with 75 kg warhead. Engels and Dyagilevo are located within the reach of such drones.

French President Emmanuel Macron declared that the West should consider how to meet the needs of the Russian Federation for security guarantees. Earlier, German Chancellor Olaf Scholz suggested that Europe should return to its pre-war “peaceful order” with Russia and solve “all questions of common security” after the war in Ukraine, if Russia refuses from aggression against its neighbors.

Fierce clashes continue in the area of Svatove and Kreminna. According to the preliminary information, as a result of the ongoing counter-offensive of the Ukrainian Armed Forces, the fighting is currently underway in the area of the highway between these settlements. Consequently, Russian troops are losing the opportunity to exploit this logistics route.

Russian troops keep trying to pursue the offensive in several frontline areas at once. The heaviest fighting is taking place in the area of Bakhmut, which Russian troops are trying to bypass from the south and encircle.

The shelling of civilian infrastructure does not stop, as a result of which at least 2 people were killed and 17 people were wounded in the Donetsk region on December 1–4.

The Armed Forces of Ukraine use high-precision weapons and purposefully deplete the Russian troops. Open sources provide information about the withdrawal of Russian troops in Zaporizhzhia region and preparations for the evacuation of occupation administrations from certain populated areas.

Russian troops keep shelling Kherson region, in particular Kherson city, using multiple rocket launchers, long-range artillery and mortars. The building of Kherson pre-trial detention center was hit, and its staff was injured. In total, at least 4 people were killed and more than 8 people were wounded in the region in recent days.

On the night of December 2, Russian troops shelled a residential infrastructure facility in Chuhuiv district of Kharkiv region. According to preliminary information, at least 2 people were injured. The next day another civilian was injured in the region.

On the night of December 5 several explosions were registered in Kryvyi Rih (Dnipropetrovsk region).  As a result of these attacks 1 person was killed and 3 were injured.

Russian troops continue systematic artillery shelling of the territories of Nikopol and Marhanets communities in Dnipropetrovsk region, as well as Sumy and Chernihiv regions.

According to the National Police, Russian shelling has killed more than 9400 civilians since the beginning of the full-scale invasion, and injured about 6800 more. Police are recording new crimes on the territories liberated by Ukrainian troops. Currently, 345 citizens, who suffered from Russian attacks in the region, are in hospitals of Mykolaiv city alone.

Since the beginning of the full-scale invasion of Russia, investigators of the National Police have opened 46649 criminal proceedings on the facts of crimes committed on the territory of Ukraine by servicemen of the Russian armed forces and their accomplices. According to the Prosecutor General, 20 states have already initiated the investigation and collection of evidence of Russia’s war crimes against Ukraine.

The mine threat remains acute, and it is particularly severe in the liberated territories of Kherson region. On December 1, a car exploded on an anti-tank mine in the region, killing one person. The situation also remains dangerous in Kharkiv region, where the police record new cases of people being blown up by mines. On December 1, 2 people died in Kharkiv region as a result of a car explosion on a mine.

The humanitarian situation is challenging in Sievierodonetsk (Luhansk region), temporarily uncontrolled by Ukraine. There is no heating and almost no electricity supply in the city. Russian troops continue to mine the perimeter of the city, as well as infrastructure facilities. Food supplies to the city are limited, with prices three times higher than in the government-controlled areas.

On December 1, another exchange of prisoners was carried out. Ukraine managed to return 50 servicemen, including Mariupol defenders – prisoners held in Olenivka. In total, 1331 prisoners have been released since the beginning of the full-scale war.

Evacuation of civilians from the territories where active hostilities are taking place is ongoing. Deputy Head of the Office of the President of Ukraine Kyrylo Tymoshenko reported that from August 2 to December 2, 317853 people were evacuated, including 76023 children, 8010 people with disabilities.

Russian military continue to obstruct evacuation from the temporarily occupied territories to the government-controlled territories. In early December they blocked a convoy of civilian cars at the checkpoint in Vasylivka (Zaporizhzhia region) and kept people there for almost 2 days. According to the mayor of Melitopol Ivan Fedorov, only 311 people were able to leave to Zaporizhzhia through the existing corridor during the week. At the same time, the Russian military stopped letting men of military age, who do not have a military card with a note about their ineligibility for military service, leave Zaporizhzhia region.

The National Resistance Center reported that Russia brought teachers from Dagestan to Melitopol to teach Russian curriculum to Ukrainian children. At the same time, raids are conducted to identify children whose parents did not let them go to school. Parents of such children are threatened with deprivation of parental rights to force them to give up their children.

Maxar Technologies has published a new satellite image, which clearly shows an increase in the number of burials at the city cemetery in Mariupol from March 29 to November 30.

The Ministry of Economy updated the forecast of GDP decline in Ukraine for the current year. It worsened due to the missile attacks of Russian troops on the energy system. Therefore, the decline may reach 33.5%.

On December 3, NASA Harvest published a study stating that Russia stole Ukrainian grain worth at least $1 billion. The KSE clarified the data, saying that as a result of the full-scale invasion of Ukraine, agricultural products worth $1.87 billion were destroyed or stolen (2.8 million tons of grains and 1.2 million tons of oilseeds).

The Cabinet of Ministers of Ukraine has merged the Ministry of Infrastructure and the Ministry of Community and Territorial Development, headed by Oleksandr Kubrakov as Deputy Prime Minister. This ministry will be responsible for raising and allocating funds for Ukraine’s recovery. For 2023, Ukraine’s emergency recovery program envisages attracting $17 billion.

On December 1-2, a two-day meeting of the Ministerial Council of the Organization for Security and Cooperation in Europe was held in the Polish city of Łódź. The key topic of discussion was the consequences and challenges to regional security created by the continuation of Russia’s war against Ukraine. The event was attended by the Minister for Foreign Affairs of Ukraine Dmytro Kuleba, who called on partners to support the establishment of a special tribunal for the crimes of the Russian Federation against Ukraine. The Minister noted that the tribunal will allow to bring Russia and its leadership to justice for gross violations of international law.  According to the OSCE Chairperson-in-Office, Polish Foreign Minister Zbigniew Rau, “the vast majority of OSCE participating States support the establishment of the tribunal, and many of them are already involved in collecting evidence and providing legal assistance to Ukraine”.

As part of the restrictive measures against Russia, the EU Council has decided to set a cap on the price of crude oil and petroleum products that are Russian in origin or exported from Russia at $60 per barrel. Similar restrictions are implemented by the Group of Seven countries and Australia. It should reduce Russia’s revenues from oil trade and stabilize global energy prices. As a result of the price cap and the EU’s ban on exports of Russian crude by sea, oil production in Russia could fall by 0.5-1 million barrels per day in early 2023. President Zelenskyi criticized the price cap, calling it “comfortable” for the Russian budget.

International partners continue to support Ukraine in the fight against Russian aggression and provide defense assistance. Lithuania returned to Ukraine two more repaired self-propelled artillery systems PzH 2000 and handed over ammunition to them. Germany provides a new batch of military aid to Ukraine, which includes BEAVER tanks, 8 surface drones, 12 border guard vehicles, spare parts for Mi-24 helicopters, 30 ambulances and other equipment. The Council of Ministers of Italy unanimously approved a resolution to continue the supply of weapons to Ukraine until December 31, 2023.

President Volodymyr Zelenskyi had a phone conversation with Head of the African Union and President of Senegal Macky Sall. The leaders discussed the outcomes of the first International Food Security Summit supported by the African Union, as well as aspects of further implementation of the Grain from Ukraine initiative and possible participation of African countries in the implementation of the “Peace Formula” – the Ukrainian plan announced by Zelenskyi aimed at ending the war.

The implementation of the Grain from Ukraine initiative to supply Ukrainian grain as humanitarian cargo to a country where there is a food shortage has begun. The first ship with 25 thousand tons of wheat was sent to Ethiopia.

On December 1, the Verkhovna Rada of Ukraine adopted a statement to the parliaments and governments of foreign countries on the recognition of the Russian regime as terrorist. The document also contains substantiation of the illegitimacy of the Russian Federation’s membership in the United Nations and the need to reform the UN.

Security Service of Ukraine continues searches at the facilities of the Ukrainian Orthodox Church. The National Security and Defense Council of Ukraine instructed the Cabinet of Ministers to submit to the Verkhovna Rada a bill to prevent religious organizations affiliated with centers of influence in Russia from operating in Ukraine. NSDC imposed sanctions against the clergy of the UOC and persons close to them for conducting subversive activities in the religious environment of Ukraine.