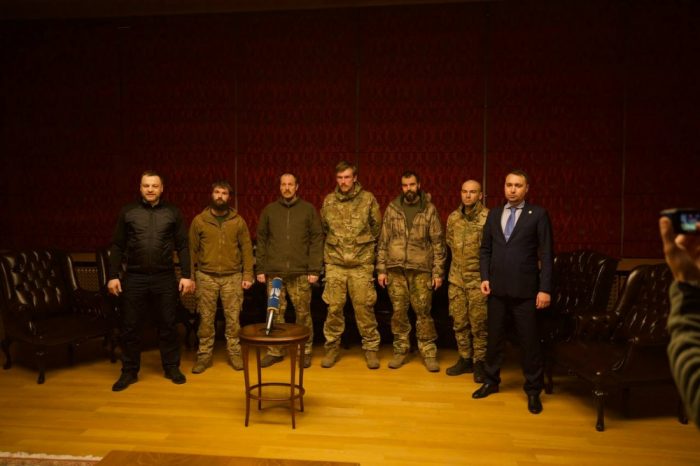 After the successful liberation of large territories in the Kharkiv region, the Armed Forces of Ukraine continue their counteroffensive in the east and south. The Russian leadership is trying to retain the captured territories and has announced the mobilization of reservists in the Russian Federation, and is again using nuclear blackmail to intimidate Western countries into withdrawing support from Ukraine. The intention to hold “pseudo-referendums” in the occupied territories of Ukraine to join Russia has also been proclaimed, a move that has already been condemned by the international community as leading to escalation. Rocket attacks on Ukraine’s energy infrastructure, including nuclear facilities, are ongoing.

As part of an exchange, Ukraine managed to return 215 prisoners of war, including 108 fighters of the Azov regiment, who defended Mariupol.

Positional battles continue in Donbas. Russian troops keep trying to attack Bakhmut and also try to break through the Ukrainian defenses near Donetsk. Instead, the AFU continues to push them out of the northern part of the region. In addition, the head of the Luhansk Regional Military Administration, Serhii Haidai, reported the liberation of the village of Bilohorivka, north of Lysychansk.

Russian forces continue shelling Kharkiv and other populated areas in the region. In recent days, at least 3 people have been killed and 26 wounded as a result of the shelling of Kharkiv region.

Russian troops continue to target critical infrastructure in the region. In particular, in recent days they have carried out several strikes on the Pechenihy reservoir, a hydraulic structure on the Siverskyi Donets, through which logistical support for the AFU in the regained territories of northern Kharkiv region is carried out.

Russian troops have intensified strikes on the territory of Zaporizhzhya region. According to updated information, a massive missile strike on Zaporizhzhia, which they carried out in the night of September 19, caused significant damage to the city’s residential infrastructure (about 42 private houses and 34 apartments in 10 multi-story buildings were damaged to varying degrees).

In the afternoon of September 21, Zaporizhzhia was attacked again. As a result, infrastructure facilities were hit. Besides the regional center, Russian troops launched missile strikes on settlements in the Zaporizhzhia region. Oleksandr Starukh, head of the Zaporizhzhia Regional Military Administration, reported increased frequency of strikes on the power supply system.

In response, the AFU keeps striking at Russian military facilities. On September 19, there were explosions at an airfield in the temporarily occupied town of Melitopol. On September 20, explosions were also recorded in the town itself.

The Ukrainian Armed Forces are striking at the Russian grouping on the right bank of the Dnipro River and its logistical support routes. There are reports of the destruction of a Russian military convoy near Nova Kakhovka and explosions in Kherson.

In the southern direction, Ukrainian air defenses shot down an Iranian kamikaze drone Shahed-136. The use of this weapon had previously been recorded in the Kharkiv region.

Russian troops continue shelling civilian infrastructure. They use MLRS for strikes in the Kryvyi Rih direction.

There are also strikes in the Dnipropetrovsk region. On September 19, one civilian was wounded there. The Russian military is shelling the Nikopol district particularly intensively.

Digital Transformation Minister Mykhailo Fedorov reported that Ukrainian hackers obtained personal data of mercenaries of the so-called private military company Wagner, used by Russia to carry out aggression against Ukraine, by breaking into its Internet site.

The Office of the UN High Commissioner for Human Rights has updated data on civilian casualties resulting from Russia’s full-scale invasion of Ukraine. As of September 19, the confirmed casualties are 14532 (5916 dead, 8616 wounded). According to the Office of the Prosecutor General, as of the morning of September 21, as a result of the armed aggression of the Russian Federation in Ukraine, the number of affected children increased to 1155 (391 children killed, 764 wounded). According to the government platform “Children of War,” as of September 21, 7,754 children had been deported and 233 were missing.

On September 21, Ukraine and Russia conducted a large-scale exchange of prisoners. Ukraine handed over to Russian agent Viktor Medvedchuk and 55 captured Russian servicemen. Ukraine managed to free 215 Ukrainian soldiers from Russian captivity, including 108 Azov fighters (including Mariupol defense commanders). The exchange was mediated by Turkish President Recep Tayyip Erdogan. Also with the mediation of Saudi Crown Prince Mohammed bin Salman, 10 citizens of other states (the United Kingdom, the United States, Morocco, Sweden, and Croatia) were released from Russian captivity.

Russia continues to threaten Ukrainian and global nuclear security. On the night of September 19, Russian troops struck the South Ukrainian nuclear power plant. A missile fell 300 meters from the facility’s nuclear reactors. On September 21, Russian troops once again shelled the Zaporizhzhia NPP, damaging communications equipment of one of the power units.

The exhumation of bodies from the mass grave in Izium (Kharkiv region) is underway. As of the evening of September 21, the bodies of 320 civilians (including 2 children) and 18 AFU military personnel have been exhumed.

In the liberated settlement of Kozacha Lopan (Kharkiv region) another places of torture of Ukrainian citizens were discovered. The Russian military had set up detention facilities in the basements of the train station and a local store, where they forcibly detained and tortured people.

The police of the Kyiv region continue to check the forests and detect crimes where Russian army positions were located. On September 20, the bodies of two more tortured men were found in the forest belt where law enforcers had already found 18 civilians killed by the Russian military.

Abductions and other crimes committed by the occupation administration continue in the occupied territories. On September 20, Russian soldiers kidnapped two women from their homes in Kherson region. Their location is currently unknown. In Luhansk region, the so-called “Supreme Court” of the “LPR” imprisoned an OSCE employee for 13 years on charges of treason.

In Crimea, the verdict was announced on the defendants in the case of the so-called “sabotage of the gas pipeline” in the village of Perevalne, which allegedly took place in August 2021. One of the leaders of the Crimean Tatar national movement Nariman Dzhelial was sentenced to 17 years in prison; the other defendants in the case, Asan and Aziz Akhtemov, received 15 and 13 years in prison, respectively.

The Verkhovna Rada of Ukraine adopted in whole the draft law No.7668-d, which provides for the return of excise tax on fuel. Benefits were also made for fuel for the needs of the Ministry of Defense. All these benefits are valid until the end of martial law, but no later than July 1, 2023.

Russian President Vladimir Putin, in response to the Russian army’s military failures in the war with Ukraine, gave a speech in which he announced the mobilization of reservists in Russia and again resorted to nuclear threats and accusations toward NATO countries. He also announced so-called referendums in the occupied areas of Donetsk, Luhansk, Zaporizhzhia and Kherson regions to join Russia. The Kremlin is betting that an attempted annexation of these territories could stop a Ukrainian counteroffensive.

The Ukrainian leadership stressed that the “pseudo-referendums” will have no real consequences, in particular Foreign Minister Dmytro Kuleba pointed out that Kyiv has the right to liberate its territories and will continue to do so. Relevant statements about the non-recognition of their results have already been made in the White House, NATO, as well as the EU. U.S. Presidential National Security Adviser Jacob Sullivan said that Washington was aware of Russia’s intention to use these shameful “referendums” as a pretext to annex Ukrainian territories, but would never recognize any part of Ukraine’s annexation to Russia. NATO Secretary General Jens Stoltenberg stated that Putin’s speech was an escalation. According to Stoltenberg, the speech clearly demonstrated that the war was not going according to the Russian leadership’s plan. EU Foreign Minister Josep Borrell declared that these “referendums” are violations of international law. In addition, it is an attack on the principles of sovereignty and territorial integrity that underlie the international system. Marija Pejčinović Burić, Secretary General of the Council of Europe, said that the so-called “referendums” in the occupied Ukrainian territories were a further escalation of the conflict and an ongoing violation of Ukraine’s territorial integrity.

Given the actions of the Russian Federation, the European Commission has stepped up efforts to prepare an eighth package of sanctions. Potential measures under the new EU sanctions package could include restrictions on prices of Russian oil, expansion of sanctions lists, as well as a ban on imports of Russian diamonds and other luxury goods.

On 19 September, the Ukrainian delegation started a working visit to the USA to participate in the 77th session of the UN General Assembly. Prime Minister Denys Shmyhal and First Lady of Ukraine Olena Zelenska held a meeting with UN Secretary-General António Guterres as part of their visit to New York. During the talks, they discussed the implementation of humanitarian programs, assistance in the reconstruction of Ukraine, as well as the expansion of the “grain initiative” and the demilitarization of the Zaporizhzhia NPP. Shmyhal also met with Canadian Prime Minister Justin Trudeau, British Prime Minister Liz Truss and European Council President Charles Michel. Ukrainian Foreign Minister Dmytro Kuleba, together with NATO Secretary General Jens Stoltenberg, discussed the current situation on the front and the risk of a possible escalation. President Zelenskyi made a video-conference address to the UN General Assembly, in which he called on world leaders to deprive Russia of its voting rights in international institutions and veto rights in the UN Security Council.

U.S. President Joe Biden, in his address to the UN General Assembly, declared that Russia has seriously violated key principles of the UN Charter through its aggression against Ukraine and threats to use nuclear weapons. Biden also stressed the need to refrain from the use of the veto by members of the UN Security Council and supported the idea of reforming the relevant body by including new permanent and non-permanent members (in particular, among African, Latin American and Caribbean states).

As part of an ongoing dialogue with Ukraine’s partners and allies, the Head of the Office of the President of Ukraine Andrii Yermak held a telephone conversation with Jacob Sullivan, the U.S. Presidential National Security Adviser, and held a meeting with members of the U.S. House Intelligence Committee via video-conference on September 20. Yermak briefed the U.S. side on the situation on the frontline and the measures taken to ensure security in the de-occupied territories. They also discussed the continuation of security assistance to the Ukrainian army.

In the conditions of further counterattack by the AFU, the military support of Ukraine by international partners remains crucial. Thus, the German Ministry of Defense announced that it would supply Ukraine with four more Panzerhaubitze 2000 self-propelled artillery units with an additional ammunition package. Germany also reached an agreement with Slovenia on a so-called chain swap, as a result of which Slovenia will transfer 28 upgraded M-55S tanks to Ukraine.