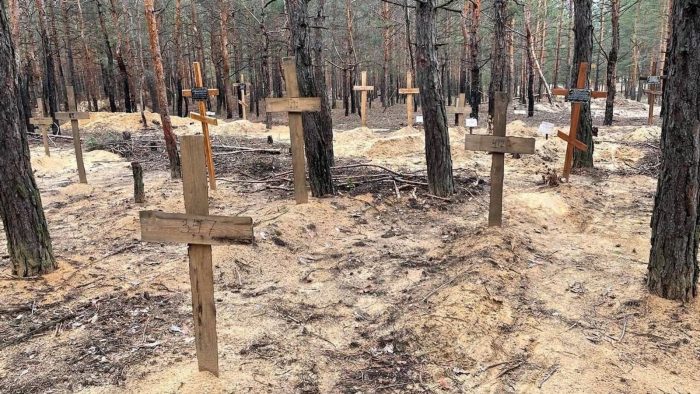 The Armed Forces of Ukraine continue their offensive in the south and east of the country. Russian forces have largely gone on the defensive, but continue to launch missile strikes on Ukrainian territory. They concentrate on attacks against critical infrastructure.

Mass graves of civilians, estimated at 445, were discovered on the liberated territory of Izium in the Kharkiv region. Exhumation work is currently underway at the site.

Russian troops are preparing for a possible AFU offensive on Sievierodonetsk. The former have disabled mobile and cable internet for the population in order to prevent the possible leakage of information from the locals about the movement of their troops. According to Serhii Haidai, head of the Luhansk Regional Military Administration, they are moving troops and equipment to the area of Svatove, an important logistical hub on the route between Kupiansk and Sievierodonetsk.

Despite the retreat of Russian troops from most of the occupied territories of Kharkiv region, they continue shelling of Kharkiv and other population centers of the region. In recent days, at least 3 people have been killed and 27 wounded as a result of the shelling in the Kharkiv region.

The press with reference to the artillery commander of the 92nd separate mechanized brigade of the AFU, Colonel Rodion Kulahin, writes about the use of Iranian UAVs by Russian troops in the Kharkiv direction.

The AFU continues to actively pursue the destruction of the Russian army’s military potential in the Zaporizhzhia direction. Intense strikes are carried out against the military and logistics infrastructure of Melitopol. According to Ivan Fedorov, the mayor of the town, the AFU struck the airfield on September 16. On September 17, several explosions were recorded on the territory of Russian military bases near Melitopol. Also, guerrillas blew up a section of the railroad used by Russian troops to deliver weapons and fuel for military equipment from Crimea.

Russian shelling of the region is ongoing. On September 17, a missile hit a village near Zaporizhzhia. On the night of September 19, a massive strike was launched against the infrastructure of Zaporizhzhia with a preliminary report of eight missiles hitting it.

The Ukrainian Armed Forces continue to keep transport routes and military infrastructure facilities in the Kherson region under fire control. In particular, on the night of September 15, they destroyed a Russian troop base in Nova Kakhovka. On September 16, there was an explosion at the Kherson Regional Administrative Court building in Kherson, which is used as the headquarters of the occupation administration.

Russian troops launched strikes on the territory of the Mykolaiv region. On the night of September 17, they shelled Ochakiv and surrounding villages. One civilian was killed as a result. On the night of September 18, another strike was launched against Mykolaiv, as a result of which one of the city’s hospitals was damaged. On September 19 Russian army launched a missile attack on the industrial zone of the South Ukrainian nuclear power plant – the shock wave damaged the buildings of the NPP.

According to the Office of the Prosecutor General, as of the morning of September 18, as a result of the armed aggression of the Russian Federation in Ukraine, the number of affected children increased to 1147 (390 children were killed, 757 were wounded). According to the government platform Children of War, as of September 18, 7,716 children had been deported and 231 were missing.

In the de-occupied territory of Kharkiv region, the Ukrainian military, investigators, and experts proceed to uncover new evidence of war crimes committed by the Russian army. A mass grave of Ukrainian citizens – about 450 graves – was discovered near Izium. The head of the Kharkiv Regional Military Administration and the head of the Investigative Department of the Kharkiv Region Police indicated that 99% of the exhumed bodies had signs of violent death. According to Oleksii Kopytko, adviser to the Minister of Defense, the number of victims of the Russian occupation among the civilian population of Izium is twice as high as the number of victims in Bucha in the Kyiv region. The burials of 17 Ukrainian military personnel were also found. Work on the search and identification of the bodies is still ongoing and is complicated by the fact that some areas are mined.

U.S. Secretary of State Anthony Blinken said that such actions by the Russian military in many cases amounted to war crimes. The Czech Republic, which now holds the EU presidency, called for the creation of an international tribunal on the fact of the found grave. Ukrainian Parliament Commissioner for Human Rights Dmytro Lubinets said that probably more than 1,000 Ukrainian citizens were tortured and killed in the liberated territories of the Kharkiv region. The executions of hundreds of people in the Kyiv region and the mass grave in Izium show that these are not isolated cases, but a pattern of behavior by Russians in every occupied territory.

Andrii Niebytov, head of the National Police Headquarters in the Kyiv region, reported that investigators found at least 10 torture chambers in recently liberated towns in the Kharkiv region (including Vovchansk, Kupiansk, and Balakliia) where Russian soldiers tortured civilians. On September 17, the Kharkiv Prosecutor’s Office discovered another prison in the urban-type settlement of Kozacha Lopan, where the Russian military had tortured civilians. In the arranged prison in Kupiansk, the illegally imprisoned citizens were kept in inhumane conditions. They were forced to sleep standing up because the cells were full – the Russian military kept more than 400 people in rooms designed for 140 people. According to local residents, border guards also found five teenagers between the ages of 15 and 17 who had been kept in a basement closed by the Russians for seven days.

Ukrainian President Volodymyr Zelenskyi claimed that the Russian military had been holding people, including foreigners, captive for months. Seven Sri Lankan citizens who were studying at the Kupiansk Medical College during the invasion and had been held captive by Russian troops since March were rescued after the liberation of Kharkiv region. The foreigners were held in harsh conditions and subjected to torture.

Mandatory evacuations from the frontline territories of Luhansk, Donetsk, Kherson, Zaporizhzhia, and Kharkiv regions continue. The Ukrainian authorities, with the support of volunteer organizations, have managed to evacuate about 82,000 Ukrainians to safe regions: primarily women, children and the elderly.

The head of the Kharkiv Regional Military Administration Oleh Syniehubov reported an attempt to evacuate patients of a psychiatric hospital in the Kharkiv region from the high danger zone. The evacuation was actually disrupted due to the shelling of Russian troops. Only 30 patients were brought to a safe location. At the same time, 6 people died during the operation.

On September 15, the European Parliament adopted a resolution condemning the policy of forced deportation of Ukrainian citizens. The document notes that the forced relocation and deportation of children from Ukraine and their forced adoption by Russian families is a violation of Ukrainian and international law, in particular Article II of the UN Convention on the Prevention and Punishment of the Crime of Genocide. The document calls for unimpeded access of the International Committee of the Red Cross, the Office of the UN High Commissioner for Human Rights, the Office of the UN High Commissioner for Refugees, and the International Organization for Migration to filtration camps and other places where Ukrainian civilians are held.

People in occupied Mariupol continue to live in challenging conditions. For three months, residents have been without water and electricity. The occupation administration refuses to repair the broken substation, which forced residents to go on a spontaneous riot.

Minister of Culture and Information Policy Oleksandr Tkachenko revealed that according to the National Union of Journalists, 39 journalists have been killed in Ukraine since the start of the full-scale Russian aggression.

The nongovernmental organization Conflict Observatory estimates that Russia’s invasion of Ukraine has affected 15.7% of Ukraine’s crop storage facilities. As of July 2022, Russian occupation forces controlled about 6.24 million tons of crops. In addition, 2.25 million tons of storage capacity was damaged in Ukrainian-controlled territory and 0.82 million tons in Russian-controlled territory. In total, this amounts to more than 5% of the pre-war storage capacity of crops throughout Ukraine. The intentional destruction of granaries may qualify as a war crime and a violation of Additional Protocol I of 1977 to the Geneva Conventions of 1949.

Ukrainian subversive groups may be involved in attacks against representatives of the occupation administration in the town of Berdiansk (Zaporizhzhia region). On September 16, the so-called “deputy mayor for housing and utilities” and his wife, who headed a commission for preparing a pseudo-referendum on the annexation of the occupied territories to Russia, were killed there.

International partners continue to provide macrofinancial support to Ukraine. In particular, on September 15, Ukraine received the first payments from the European Investment Bank in the amount of €500 million. These funds are part of the second €1.59 billion package of emergency solidarity measures from the EIB.

Ukrainian President Volodymyr Zelenskyi has held a meeting with the President of the European Commission, Ursula von der Leyen, who has been on a visit to Kyiv. The head of state thanked the President of the European Commission for the visit and noted its important role in the defense and financial support of Ukraine during the war. Zelenskyi noted that during the talks they discussed the energy challenges facing Ukraine and the EU. They also determined the expansion of opportunities for joint cooperation in this area.

Ukrainian President Volodymyr Zelenskyi issued a decree on 16 September approving the agreement between Ukraine and the European Union on cargo transportation by road – the so-called “transport visa-free regime”. Together with cancellation of customs duties and tariffs for Ukrainian goods, this agreement saves Ukrainian business dozens of millions of dollars and opens up new opportunities for Ukrainian products at European markets. On the same day the president of Ukraine canceled a number of decrees on economic cooperation of some regions of Ukraine with Russia and Belarus.

Partner states continue to provide Ukraine with military assistance in the fight against Russian aggression. The United States of America announced a new aid package worth $600 million. It will include additional ammunition for MLRS and artillery, anti-artillery radars, and UAV countermeasures. The United States will also deliver to Ukraine two NASAMS anti-aircraft systems capable of providing protection against missile attacks in the next few months.

The Kingdom of Spain has sent to Ukraine the fifth transport aircraft of the national air force with ammunition for large-caliber artillery systems. The Greek Defense Ministry announced that it would transfer 40 Soviet BMP-1 infantry fighting vehicles to Ukraine, instead receiving modern Marder infantry fighting vehicles from Germany. In addition, German Defense Minister Christine Lambrecht stated that Germany would supply Ukraine with two more Mars 2 multiple rocket launcher systems, 200 missiles for them, as well as 50 Dingo armored vehicles. The German Federal Government also approved the sale to Ukraine of 18 state-of-the-art RCH-155 self-propelled artillery systems, which Kyiv requested two months ago. A new aid package to Ukraine was approved by the Belgian Federal Government.

The Board of Governors of the International Atomic Energy Agency (IAEA) adopted a resolution demanding Russia to abandon the Zaporizhzhia NPP. The document says that Russia has to immediately stop all actions directed against Zaporizhzhia nuclear power plant and any other nuclear facility in Ukraine. The resolution was supported by 26 out of 35 members of the Board; only Russia and China voted against the document.