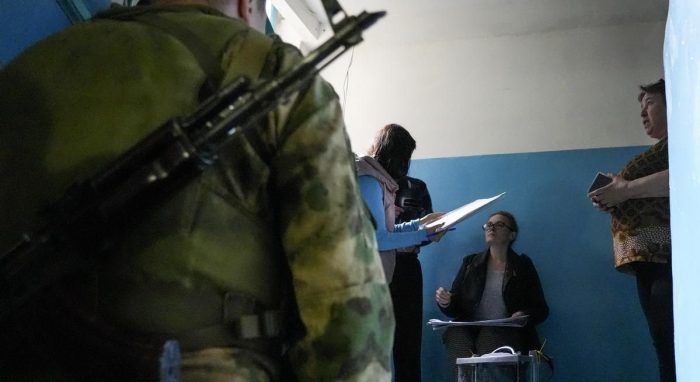 Armed Forces of Ukraine continue a counteroffensive in the east and south. They have made local successes along the border of Kharkiv and Luhansk regions, as well as in the north of Donetsk region. The Russian military is concentrating its efforts on attacks near Bakhmut.

The Russian Federation has stepped up its use of kamikaze drones against infrastructure in Ukraine. Attacks are concentrated in the south – against Odesa, Mykolaiv, Kryvyi Rih and Dnipro. The Russian military primarily uses Iranian-made UAVs.

In the temporarily occupied territories of Ukraine, the so-called “referenda” continue, through which Russia is trying to “legalize” their annexation. The international community has already stated that it does not recognize the results and has condemned the actions of the Russian Federation. The Russian leadership states that the annexed territories will be covered by the country’s nuclear doctrine and threatens to use nuclear weapons.

Russian troops continue to attempt an offensive on Bakhmut in the Donetsk region. On September 22, they destroyed the bridge over the Bakhmutka River that connected the two parts of the town. However, the AFU hold the line, and managed to retake some of the positions they had lost. There are also reports of gradual advance of the Ukrainian military in the north of the Donetsk region.

The head of the Luhansk Regional Military Administration, Serhii Haidai, reported the destruction of several facilities of Russian troops in the temporarily occupied territories.

Intensive shelling of the Donetsk region by Russian forces is ongoing, and results in the destruction of civilian infrastructure and casualties among civilians. During September 22-25, at least 14 civilians were killed and 39 injured in the Donetsk region.

Russian troops keep shelling Kharkiv and other populated areas of the Kharkiv region. In recent days, at least 1 person was killed and 24 were wounded in Kharkiv region.

Russian troops continue to launch indiscriminate massive missile strikes against civilian infrastructure in Zaporizhzhia every night with S-300 missiles. On September 22, in particular, Russian troops struck the center of the city with nine such missiles. On September 23, they shelled the city with 10 missiles. As a result, 2 civilian infrastructure facilities were damaged and 3 people were injured. In the night of September 24, the rocket fire resumed, one of the rockets hit a residential area, killing 1 person and injuring 9. On the night of September 25, another massive missile strike was launched against Zaporizhzhia.

The Ukrainian Armed Forces hold fire control over the crossing of the Dnipro River, which is used to support the Russian grouping on the right bank of the river. By carrying out precise strikes, they prevent the movement of additional forces to this direction. They are also striking at the locations of Russian troops and the occupation administration. Russian media report the death of Oleksii Zhuravko, a representative of the occupation administration in Kherson, a former member of the Ukrainian parliament.

In recent weeks, Russian troops began to actively use their own UAVs to conduct reconnaissance of Ukrainian positions. In addition, the use of Iranian kamikaze drones became more frequent. On September 23 and 25, they were used to attack Odesa. As a result, the headquarters building of Operational Command South was damaged. On the night of September 26, two drones attacked an ammunition depot in the Odesa region.

Meanwhile, the AFU is actively adapting and looking for vulnerabilities of such weapons. In particular, the Air Force Command reported that during September 22, the AFU destroyed 7 Russian UAVs, 4 of which were Iranian-made kamikaze drones. On September 23, two Russian UAVs were shot down over the territory of Dnipropetrovsk region. One of them fell on a private yard, and 6 people were injured as a result.

Russian troops continue shelling the border areas of Sumy and Chernihiv regions. There are also ongoing strikes against areas in Dnipropetrovsk region near the front line. The Nikopol region is still experiencing the most intense attacks from the Russian troops. In the morning of September 24, the town of Marhanets suffered heavy shelling from MLRS. As a result, 3 people were wounded.

According to the Office of the Prosecutor General, as of the morning of September 25, the number of children affected by the armed aggression of the Russian Federation in Ukraine increased to 1,164 (391 children killed, 773 wounded). According to the government platform Children of War, as of September 21, 7,820 children had been deported and 235 were missing.

The head of the Kharkiv Regional Military Administration, Oleh Syniehubov, reported the completion of exhumation of bodies from the mass grave site in Izium. 447 bodies of the dead were retrieved from the graves, of which only 22 belonged to servicemen. The rest were civilians, including 215 women, 194 men and 5 children; the sex of 11 people could not be determined. Most of the dead have signs of violent death, and 30 have signs of torture. In addition, law enforcers found 18 places where the Russian military illegally detained and tortured Ukrainian citizens.

The Independent International Commission of Inquiry on Ukraine set up by the UN Human Rights Council said that its investigators concluded that Russia had committed war crimes in Ukraine. These include the bombing of civilian areas, numerous executions, torture and acts of sexual violence. The investigation was conducted in areas liberated from occupation in the Kyiv, Chernihiv, Kharkiv, and Sumy regions. The Commission stressed that a number of the attacks investigated by the team were committed without distinction between civilians and combatants, including attacks using cluster munitions, which are banned by most countries under the 2008 Treaty. The U.S. representative stated that numerous sources indicated that Russian authorities had interrogated, detained and forcibly deported between 900,000 and 1.6 million Ukrainian citizens.

The military released from Russian captivity report on the inhumane conditions in which they were held. British volunteer Aiden Aslin recounted that he had been held in solitary confinement for five months without food or toilet facilities, and had been psychologically abused and forced to sing the Russian national anthem every day. Dmytro Lubinets, the Verkhovna Rada Commissioner for Human Rights, reported that no ICRC representative was allowed to see any of the released prisoners during their captivity, which is a violation of the Geneva Conventions by the Russian Federation. The head of the Azov Patronage Service, Olena Tolkachova, informed that the released servicemen were exhausted, shell-shocked, with a large number of hidden fractures and exacerbations of chronic diseases. Deputy Prime Minister of Ukraine for the Reintegration of the Temporarily Occupied Territories Iryna Vereshchuk said that about 2.5 thousand people are still in Russian captivity. Moreover, Russian troops illegally hold civilians, a large part of whom are women.

So-called “referenda” continue in the Russian-occupied territories of Ukraine, where residents are asked to vote for the “independence” of the four Ukrainian regions and their accession to Russia. In this connection, Ukraine has requested an urgent meeting of the UN Security Council. Ukrainian officials indicated that people were forbidden to leave some occupied areas until the voting was completed; armed groups went door-to-door to force people to vote. People were also threatened with dismissal for refusing to vote. The Center for Countering Disinformation under the National Security and Defense Council reported that the Russian military forced even Ukrainian prisoners of war held in the Olenivka prison to vote in favor of annexing the Donetsk region to the Russian Federation. The head of the Luhansk Regional Military Administration, Serhii Haidai, stated that having no lists of the population left in the virtually destroyed cities, the Russians claim a turnout of 46% for the so-called referenda.

On September 22, there was an explosion at the Central Market in temporarily occupied Melitopol (Zaporizhzhia region). The mayor of the town, Ivan Fedorov, denied the involvement of the AFU or the resistance movement – there was a provocation by the Russian military, which tried to create information occasion for propaganda in the run-up to the pseudo-referendum. The mayor said that the resistance forces could be involved in the powerful explosion that occurred in the northern part of Melitopol in the evening of September 24. Another explosion occurred in the town on September 25. On the same day, an explosion was recorded in temporarily occupied Berdiansk.

According to analytical forecasts, Ukraine’s 2022 grain harvest could be between 54.1 and 55.7 million tons, which is significantly less than previous projections. A lower harvest and logistical difficulties could reduce Ukraine’s agricultural exports.

The National Bank of Ukraine reports that solvent Ukrainian banks received UAH 8.4 billion in net profit in January-August 2022. During the same period in the previous year, the net profit of the Ukrainian banking sector amounted to UAH 45.6 billion.

The United States has expressed its strong willingness to respond to Russian nuclear blackmail and threats to use nuclear weapons against Ukraine following so-called referenda in Ukraine’s occupied territories. Jake Sullivan, the U.S. President’s National Security Advisor, declared “catastrophic consequences” for Russia in case of its use of nuclear weapons against Ukraine. U.S. Secretary of State Anthony Blinken confirmed that the U.S. side had non-publicly warned Russia about the consequences of using nuclear weapons and called for an end to its threats.

Ukraine’s partners condemned the Russian Federation for holding so-called “referenda” on Ukraine’s temporarily occupied territories in order to “legalize” their annexation. U.S. President Joe Biden said that the United States would never recognize the results of pseudo-referenda in the occupied territories of Ukraine and threatened Russia with serious economic losses. He assured that the United States, together with its partners around the world, would reject any fabricated results announced by Russia. For their part, the G7 leaders also issued a Statement condemning the pseudo-referenda and pledging continued support for Ukraine. They said that they would respond to Russia’s actions with further targeted sanctions. Also, the Congress of Local and Regional Authorities of the Council of Europe published a statement, which noted that the pseudo-referendums organized by Russia in the occupied territories of Ukraine would not be recognized. The statement notes that these measures contradict international law and the Constitution of Ukraine and are illegal, and their results will be invalid.

The head of the European Council, Charles Michel, spoke in favor of removing Russia from the UN Security Council.

Ukrainian Foreign Minister Dmytro Kuleba met in New York with Chinese Foreign Minister Wang Yi. The diplomats discussed the state of Ukrainian-Chinese relations. Kuleba noted that his Chinese counterpart confirmed his respect for Ukraine’s territorial integrity and sovereignty. However, analysts point out that China’s de facto neutrality regarding the Russian invasion of Ukraine is pro-Russian in many aspects.

The foreign ministers of Ukraine, Poland and the United Kingdom met in New York in a trilateral format and coordinated steps to counter Russian aggression, taking into account Putin’s decision to carry out partial mobilization. In a general final statement, the parties recorded an agreement to continue firm and long-term support for Ukraine in countering Russian aggression, as well as to strengthen the defense capabilities of the three countries and NATO’s eastern flank.

Ukraine continues to receive military assistance to fight Russian aggression and defend its sovereignty. The United States transferred two NASAMS anti-aircraft systems capable of providing protection against missile attacks to Ukraine. Germany handed over six additional Gepard self-propelled anti-aircraft artillery systems and 6,000 munitions. On September 23, however, the German parliament failed to support a resolution of the opposition CDU/CSU bloc to immediately supply Ukraine with tanks and other Western-style armored vehicles.

In connection with the shooting down of an Iranian-made drone by the Ukrainian military, Ukraine obtained evidence confirming the supply of Iranian weapons to Russia for their further use by Russian troops on Ukrainian territory. The Ukrainian Foreign Ministry accused Iran of an unfriendly act and decided to strip the Iranian ambassador to Ukraine of his accreditation as well as significantly reduce the number of diplomatic staff of the Iranian embassy in Kyiv.