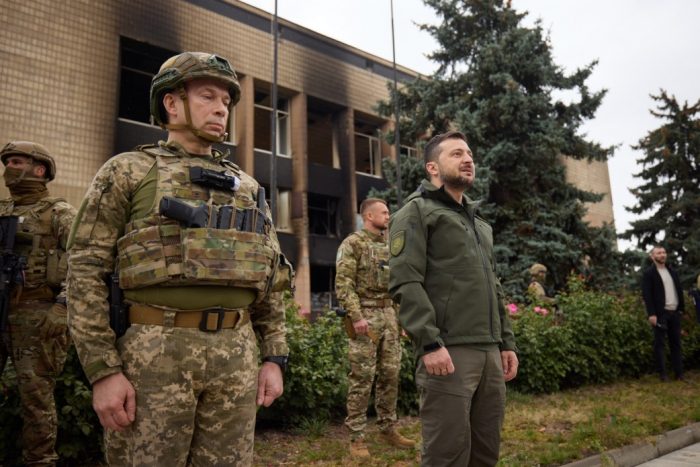 The Armed Forces of Ukraine continue their offensive in the south and east. In recent days they liberated occupied settlements in the north of Kharkiv region. In addition, individual units of the Ukrainian military advanced in Donetsk and Luhansk regions (near Sloviansk and the Sievierodonetsk-Lysychansk agglomeration). In the south they managed to approach Kherson. In these areas, Russian forces are trying to form a new line of defense and hold their positions. At the same time, the Russian Federation continues rocket attacks on critical civilian infrastructure in different regions of Ukraine.

The Ukrainian Armed Forces are carrying out a counterattack in northern Donbas. Ukrainian troops have liberated Sviatohirsk and nearby settlements. Fighting is currently underway in the Lyman area.

Russian forces are trying to form a new defense line. Regular troops and mercenaries from the so-called Wagner Group continue their offensive operations in the Bakhmut area. Intensive shelling of the Donetsk region continues, leading to the destruction of civilian infrastructure and civilian casualties. During September 12-14, at least 12 people were killed and 39 injured in the Donetsk region.

The Ukrainian Armed Forces have liberated most of the Kharkiv region. According to Oleh Syniehubov, Head of the Kharkiv Regional Military Administration, 6% of the region remains under occupation as of September 14. After the defeat near Izium, Russian troops also retreated from the northern districts of the region. In total, over the past few days, the Ukrainian military managed to liberate about 388 population centers in the Kharkiv region (including the border town of Vovchansk).

Even after the Russian troops retreated, they continue shelling the Kharkiv region. They hit critical infrastructure, causing power outages. In addition to Kharkiv, the town of Lozova was also struck. In recent days, at least 3 people have been killed and 12 injured as a result of shelling in the Kharkiv region.

In recent days, the AFU have carried out several strikes against Russian military facilities in the temporarily occupied city of Melitopol. According to the city’s mayor, Ivan Fedorov, Ukrainian troops hit a Russian military base near the local airfield on September 13.

On the evening of September 14, rockets were fired at a suburb of Zaporizhzhia, targeting an infrastructure facility.

Persistent shelling of Mykolaiv continues, in particular, on September 14, local authorities reported a massive rocket attack. According to preliminary information, 2 people were killed and 3 were injured.

On the evening of September 14, Russian troops launched a massive missile strike on hydraulic structures in Kryvyi Rih. After the attack, the water supply was suspended in some districts of the city. An increase in the water level in the Inhulets River was recorded. It is likely that in this way, the Russian troops are trying to create obstacles to the offensive of the Ukrainian military downstream in the Kherson region.

The Office of the UN High Commissioner for Human Rights has updated civilian casualty figures from the full-scale Russian invasion of Ukraine. As of September 12, the confirmed casualties are 14,248 (5,827 dead, 8,421 wounded). According to the Office of the Prosecutor General, as of the morning of September 14, the number of injured children in Ukraine resulted from the armed aggression of the Russian Federation rose to 1,113 (384 children killed, 749 injured). According to the government platform Children of War, as of September 14, 7,671 children had been deported and 231 were missing.

The General Staff of the Armed Forces of Ukraine reports the devastating consequences of Russian aggression, hostilities, and occupation of Ukrainian territories. More than 70,000 square kilometers in ten regions of Ukraine remain mined. Up to two hundred war crimes committed by the Russian military are recorded in the liberated territories every day.

In the retaken territories of the Kharkiv region, cases of Russian military crimes against civilians are recorded. The situation in these areas is not different from the one that took place near Kyiv in February and March. There are cases of looting, illegal detentions, torture, and killing of civilians. According to Ukrainian President Volodymyr Zelenskyi, this is new evidence of the genocide that the Russian Federation is carrying out against Ukrainians.

Kharkiv Region Prosecutor General Oleksandr Filchakov stated that several burial sites of local residents killed by the Russian military were found in these territories of Kharkiv region. In particular, after the de-occupation of the Zaliznychne village in Kharkiv region, law enforcers found four corpses with traces of torture. According to the investigation, they had been killed by the Russian military during the occupation.

A correspondent of The Guardian, after speaking with residents of de-occupied Izium, discovered that the Russian military arrived in the town with ready-made lists of local residents who were subject to reprisals (military personnel or members of their families, veterans of combat operations in the Donbas). According to local residents, these people were kidnapped and taken out of the city. Their fate is currently unknown.

The Head of the Investigation Department of the Kharkiv Region Police Serhii Bolvinov reported that in the premises of the Balakliia police department, where the Russian military and special services detained local residents, a confirmed fact of a person’s death as a result of torture was documented. There is also evidence of cruel treatment of illegally detained people. The hostages, including women, slept on the floor and were tortured by electric current during interrogations.

According to Izium Mayor Valerii Marchenko, at least a thousand town residents were killed as a result of Russian aggression, and more than 80% of all infrastructure in Izium was destroyed.

The Russian occupation administrations continue to put pressure on representatives of the Ukrainian education system in the temporarily occupied territories. They try to force them to start the educational process based on Russian curricula, viewing it as an important element of propaganda influence on the young generation of Ukrainian citizens. The Educational Ombudsman Serhii Horbachev disclosed that he had received more than 600 appeals from teachers who were forced to work in educational institutions by the occupation authorities. Teachers who refuse such activities are threatened with eviction, arrest and murder.

In Kherson, an explosive device detonated in the apartment of Tatiana Tomilina, the so-called “rector” of the Kherson State University seized by the Russian military. The owner of the apartment was injured; her bodyguard is reported dead.

After a conversation with IMF Managing Director Kristalina Georgieva, Ukrainian President Volodymyr Zelenskyi announced that Ukraine will receive an additional $1.4 billion from the International Monetary Fund as part of a Rapid Financing Instrument (RFI). The IMF will also develop a new long-term lending program for Ukraine.

On September 14, Ukraine signed a memorandum on suspension of external debt payments with the international partners in G7 and Paris club for the total amount of $3.1 billion.

The Cabinet of Ministers approved the draft budget of Ukraine for 2023 and sent it to the Verkhovna Rada. According to the document, personal budget revenues make up UAH 1.28 trillion, its expenditures – UAH 2.57 trillion (more than 50% of the budget expenditures are allocated for defense). The deficit is projected at more than $3 billion a month, or 20% of GDP. To cover the state budget deficit of UAH 1.5 trillion, it is planned to attract international financial aid and issue military bonds. The draft state budget is based on a GDP growth forecast of 4.6%.

The Ministry of Infrastructure of Ukraine noted that on September 14, within the framework of the “grain initiative”, five ships with 153 thousand tons of foodstuffs left the ports of Odesa, Chornomorsk and Pivdennyi. They were sent to Asia and Europe. In total for 1.5 months of grain corridors 134 ships left Ukrainian ports for countries in Asia, Europe and Africa, exporting 3.1 million tons of agricultural products.

On September 14, Ukrainian President Volodymyr Zelenskyi visited the town of Izium in Kharkiv region, which was recently liberated from the Russian occupation. He presented state awards to servicemen and took part in the solemn raising of the national flag.

Volodymyr Zelenskyi met with visiting Danish Minister of Defense Morten Bødskov and Estonian Minister of Defense Hanno Pevkur. The sides discussed the strengthening of cooperation between the states in the security and military dimension. Zelenskyi thanked Denmark and Estonia for their strong support of Ukraine at all stages of the fight against Russian aggression, in particular, for enhancing Ukraine’s defense capabilities by providing necessary military assistance.

In addition, the President of Ukraine had a telephone conversation with Italian Prime Minister Mario Draghi. The head of the state informed the Italian side about the developments on the frontline and the ZNPP. The leaders discussed the importance of defense cooperation and its strengthening.

On September 13, a draft Kyiv Security Compact, a joint document on strategic partnership that provides security guarantees for Ukraine, was presented. The draft was developed by the International Working Group on Security Guarantees for Ukraine, which included high-ranking officials, political experts, and academics from many countries. The document was presented by co-chairmen of the International Working Group – Head of the Presidential Office Andrii Yermak and former NATO Secretary General Anders Fogh Rasmussen. The project envisages creation of a joint document on strategic partnership between Ukraine and security guarantor states, which should include the U.S., UK, Canada, Poland, Italy, FRG, France, Australia, Turkey and a number of other states of Northern, Central and Eastern Europe. Security guarantees from the respective states should encompass the provision of stable military, political and diplomatic, financial support for Ukraine and its defense capabilities and ability to deter an attack on its territory.

Ukrainian Foreign Minister Dmytro Kuleba met in Odesa with his Lithuanian and Irish counterparts, Gabrielius Landsbergis and Simon Coveney. They were the first foreign officials to whom the draft Kyiv Security Compact was presented.

The European Union extended for six months the sanctions against 1,206 individuals and 108 legal entities from Russia, which fell under restrictions because of Russia’s aggression against Ukraine. Thus, the sanctions remain in force until March 15, 2023. The restrictions include, in particular, a ban on entry, asset freezing, and a prohibition to provide financing or other economic resources to the sanctioned individuals.

Over the past week, Germany transferred four more Gepard self-propelled anti-aircraft artillery systems to Ukraine, bringing their total number to 24.