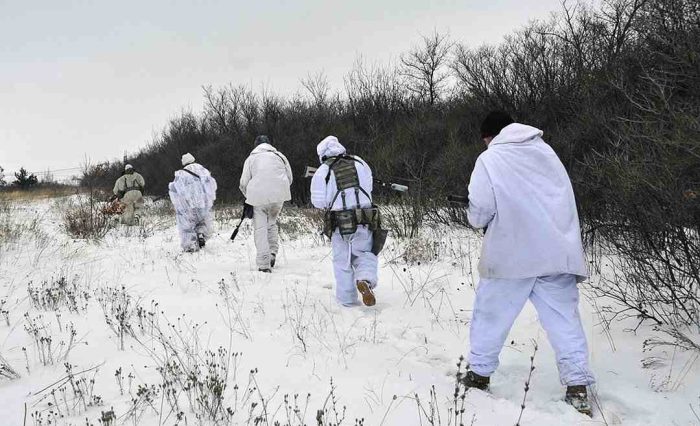 Positional fighting continues on the frontline. Russian troops are concentrating their efforts on attempts to capture Bakhmut and launch attacks near Avdiivka in Donetsk region. Ukrainian Armed Forces are trying to continue counteroffensive in the area of Svatove-Kreminna in Luhansk region.

On December 5, Russian troops launched another massive missile attack on the territory of Ukraine. However, its results were less destructive than the previous time. Most of the missiles were destroyed by Ukrainian air defense.

Over the past few days, a series of explosions have been recorded on the territory of Russian military facilities from which strikes are carried out on the territory of Ukraine. On December 5, incidents occurred at the airfield Dyagilyaevo near Ryazan and the airfield Engels-1 in Saratov region. Both facilities are used by Russian long-range aviation. On December 6, there was a fire at the airfield in Kursk. On the same day, explosions were recorded at the Slava plant in Bryansk region, which is a strategic oil depot of the Russian federal reserve.

Heavy fighting is taking place near Svatove and Kreminna. According to the head of the Luhansk Regional Military Administration Serhii Haidai, Russian troops have moved large reserves to the area in an attempt to hold back the Ukrainian offensive.

Active hostilities continue in the area of Bakhmut and Avdiivka. Russian troops do not stop shelling civilian infrastructure, as a result of which at least 3 people were killed and 27 wounded in the Donetsk region on December 5–7. At least 6 civilians were killed as a result of a strike on the bus station and central market of Kurakhove on December 7. In addition, on December 6, Russian media reported shelling in the center of Donetsk. According to them, at least 7 people were killed. In the temporarily occupied city of Shakhtarsk in Donetsk region, a Russian military truck rammed a passenger minibus, killing 16 people.

Russian troops are shelling the right bank of Kherson region. On December 6, another attack was made on the city of Kherson. During the day 2 civilians were killed and 1 more person was wounded in the region.

On December 5, Russian troops conducted another missile attack on critical infrastructure facilities in Ukraine. According to the press service of the Air Force of the Armed Forces of Ukraine, Ukrainian air defense demonstrated high efficiency once again. More than 60 out of 70 missiles launched by the Russian military were destroyed. One of the Russian missiles fell on the territory of Moldova.

The strike did not reach its goals – according to Prime Minister Denys Shmyhal, Ukraine’s energy system continued to function and retained integrity. However, some regions were seriously affected by the attack. The most devastating consequences it had for Odesa. The city was left without power and water supply. Power supply in Sumy region disappeared completely. The energy infrastructure of Kryvyi Rih in Dnipropetrovsk region was damaged. Energy facilities in Kyiv and Vinnytsia regions were also hit. As a result of the missile attack, emergency power cuts were introduced in Kyiv, Dnipropetrovsk and Donetsk regions. The attack on December 5 killed 4 people.

In the evening of December 6, Russian troops launched a missile attack on Kryvyi Rih in Dnipropetrovsk region, which damaged an industrial facility.

On the night of December 7, several regions of Ukraine were attacked using kamikaze drones. UAVs were used to strike the Zhytomyr region, where civilian objects in the city of Korosten were damaged. Several drones were shot down in the Dnipropetrovsk region.

Russian troops strike at the territory of Kharkiv region. In the morning of December 5, at least 1 person died as a result of shelling in Kharkiv region. The next day another 1 person was killed and 2 civilians were wounded in the region.

Also, shelling of Nikopol and Marhanets communities in Dnipropetrovska oblast is ongoing. As a result of shelling on the night of December 6, the water supply system in the area was damaged.

The Office of the United Nations High Commissioner for Human Rights updated the data on civilian casualties as a result of the full-scale Russian invasion of Ukraine. As of December 5, the confirmed losses amount to 17,181 people (6,702 killed, 10,479 wounded).

Based on the results of the work of the Office of the United Nations High Commissioner for Human Rights, a report was published on the killings of civilians in Kyiv, Chernihiv and Sumy regions during the occupation of these territories by the Russian armed forces from February 24 to April 6, 2022. The report notes that to date, the UN has documented the violent death of 441 civilians (341 men, 72 women, 20 boys and 8 girls) in these regions. At the same time, the report notes that the total number of arbitrary executions and lethal attacks against civilians committed by the Russian army during the reporting period in these three regions is likely to be much higher.

According to the Prosecutor General’s Office, as of the morning of 7 December, the number of child casualties in Ukraine as a result of the full-scale Russian invasion had risen to 1,296 (443 children killed, 853 injured). According to the governmental platform Children of War, as of December 7, 13112 children were deported, 333 went missing.

According to the Kherson City Council, during the eight months of Russian occupation of the region, at least a thousand orphans were taken out of schools and orphanages. They were illegally deported outside the region to other territories not controlled by the Ukrainian government or to the Russian Federation. Ukrainian human rights activists have found several institutions in four regions of Russia (Bashkortostan, Kursk, Orel and Lipetsk regions), where orphans forcibly removed from Ukraine are kept.

According to the Verkhovna Rada Commissioner for Human Rights Dmytro Lubynets, at least 2 million 800 thousand Ukrainians have been forced to leave or deported to Russia since February.

On December 6, another exchange of prisoners of war took place. Ukraine managed to return 60 servicemen, including 34 defenders of Mariupol. Also, the Office of the Commissioner for Missing Persons together with the law enforcement agencies continues to return the bodies of fallen Ukrainian servicemen. Within the framework of the next transfer of bodies 49 dead were returned to Ukraine.

The mine threat in the territories liberated from Russian troops remains extremely urgent. On December 7, during stabilization measures in Kherson region, police officers from Cherkasy region exploded on a cascade of enemy mines, 4 law enforcement officers were killed.

Representatives of Kherson regional prosecutor’s office found another place in the liberated territories where Russian military illegally detained civilians with pro-Ukrainian position. According to the investigation, they seized the district court building and used it as a headquarters and prison.

Russian military continue to loot property in the temporarily occupied territories. In Nova Kakhovka, Kherson region, they took all the equipment from the hospitals and the fire station, including fire-fighting vehicles, field kitchens and furniture. Medical equipment and ambulances were stolen from hospitals.

Minister of Culture and Information Policy Oleksandr Tkachenko said that during the full-scale war in Ukraine more than a thousand cultural objects were destroyed.

The State Ecological Inspectorate of Ukraine reported that due to the Russian full-scale invasion hundreds of hectares of the land fund of Ukraine are contaminated with waste, polluted with harmful substances released as a result of detonation. The structure of soil cover is also damaged due to the hostilities.

The National Bank of Ukraine stated that the country’s international reserves as of December 1 amounted to $27.95 billion. They exceeded the figure of the morning of February 24. This was achieved in particular due to the fact that in November the reserves increased by 10.7% due to the receipt of international assistance against the background of lower net sales of foreign currency by the National Bank and moderate debt payments in foreign currency.

Vice President of the World Bank Anna Bjerde reports on the devastating consequences of Russian aggression against Ukraine. She states that the amount of economic losses caused by the actions of the Russian Federation has increased due to the missile strikes on the Ukrainian critical infrastructure in autumn. Currently, the World Bank estimates that post-war reconstruction of Ukraine will require from €500 to €600 billion.

On December 6 – the Day of the Armed Forces of Ukraine – President of Ukraine Volodymyr Zelenskyi visited the city of Sloviansk in Donetsk region, located near the front line. He met with the military and presented them with state awards. Zelenskyi also made a working trip to Kharkiv region, where he visited a medical institution that treats wounded servicemen of the Armed Forces of Ukraine.

In addition, the President of Ukraine held video talks with Prime Minister of Montenegro Dritan Abazović. The leaders discussed military-technical assistance and European integration of Ukraine and Montenegro as candidate countries for accession to the EU. As a result of the negotiations, the parties signed the Joint Declaration on the priority areas of cooperation between the states in the process of Ukraine’s membership in NATO.

In order to deepen bilateral partnership, Prime Minister of the Republic of Moldova Natalia Gavrilița paid a working visit to Ukraine. During the meeting with the Prime Minister of Ukraine Denys Shmyhal, the Heads of Government discussed the issues of air defense, joint fight against Russian propaganda, improvement of border control of both countries and cooperation on peace and security in the Transnistrian region of Moldova.

In the framework of strengthening cooperation of the Lublin Triangle countries, the XII session of the Interparliamentary Assembly of Ukraine, Lithuania and Poland was held on December 7. As a result of the meeting, the heads of parliaments adopted a final resolution in which they approved the continuation of cooperation in this trilateral format, support for efforts to help Ukraine in the fight against Russian aggression, and called on the international community to tighten sanctions against Russia. The international community continues to make efforts to further impose sanctions against Russia and hold it accountable for the aggression against Ukraine. President of the European Commission Ursula von der Leyen announced the preparation of the ninth package of EU sanctions. It is proposed to add about 200 individuals and companies involved in criminal acts in Ukraine to the sanctions list. There are also proposed sanctions against three more Russian banks; export restrictions for dual-use goods that can be used for military purposes; restrictions against the Russian drone sector; blocking of four more Russian TV channels. On their part, Canada and the Netherlands joined the case “Ukraine v. Russia” of the International Court of Justice in the Hague, filing a joint statement on the violation of the Convention on the Prevention and Punishment of the Crime of Genocide.

International military and financial support for Ukraine is strengthening as Ukraine fights against Russian aggression. Canada will provide Ukraine with equipment to assist in demining worth about 15 million Canadian dollars. Modern remote-controlled demining systems will allow overcoming explosive consequences of the war. Lithuania sent a new batch of 155 mm artillery shells to Ukraine. Over the past week, Ukraine received 20 more Dingo armored vehicles from Germany, as well as two M1070 Oshkosh tank tractors. In addition, Norway will allocate €14.5 million to the European Peace Fund to support the EU Military Assistance Mission Ukraine (EUMAM Ukraine), which is an unprecedented decision by a non-EU country.

Germany is ready to provide Ukraine with a grant worth €200 million. The funds will be directed to support IDPs. The relevant agreement was reached during the working meeting of the Minister of Finance of Ukraine Serhii Marchenko with the Ambassador of Germany to Ukraine Anka Feldhusen, where an agreement with the Kreditanstalt für Wiederaufbau (KfW) and a separate agreement to the Grant Agreement under the Program for the Support of the Sustainability of Internally Displaced Persons in Ukraine were signed.

Time magazine named President of Ukraine Volodymyr Zelenskyi and the “spirit of Ukraine” the Person of the Year 2022. The award is given to the event or person who has had the greatest impact on global events over the past 12 months.