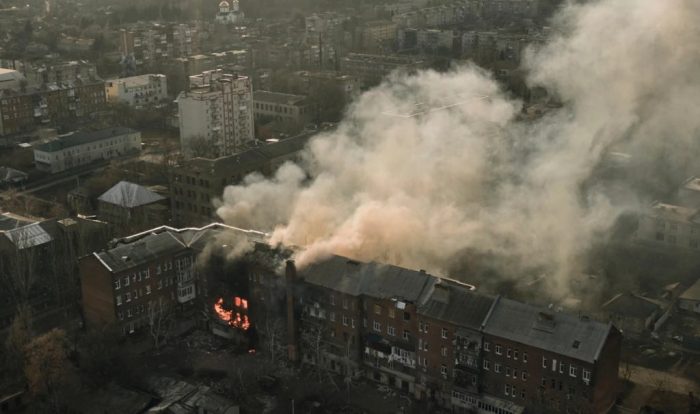 Positional fighting is ongoing in the eastern sector of the frontline. Russian troops are trying to hold occupied positions in Luhansk region and continue assault actions in Donetsk region. The fiercest battles are raging around the almost completely destroyed town of Bakhmut.

In the evening of December 10 explosions were recorded in the temporarily occupied Crimea – in Dzhankoi, Simferopol and Sevastopol. In addition, on the night of December 10-11, a fire broke out in the barracks where the Russian military lived in Crimea.

The Russian army strikes at the energy infrastructure in the south and east of Ukraine. After a break, which could have been caused by unfavorable weather conditions or temporary depletion of reserves, Iranian UAVs are again in active use.

There are still serious shortages of energy supply in Ukraine. All thermal and hydroelectric power plants are damaged – a total of 40% of high-voltage network facilities. The most affected are Kyiv, Kharkiv, Odesa and Donetsk regions.

Fighting continues in the area of Kreminna and Svatove. The Ukrainian Armed Forces counteroffensive faced the prepared defense of the Russian troops. However, according to the head of the Luhansk Regional Military Administration Serhii Haidai, Ukrainian troops are making progress. They advanced towards Kreminna and came within a few kilometers of the city. An explosion was also reported on the territory of the Wagner PMC base in the temporarily occupied Kadiivka.

Russian troops do not suspend attacks in the area of Avdiivka and Bakhmut. The fighting for the latter city is particularly heavy – the Russian command has concentrated a significant amount of artillery in the area, which is used to support the assault actions of infantry units.

Russian troops do not cease shelling of civilian infrastructure, as a result of which at least 6 people were killed and 11 people were wounded in the Donetsk region over the period of December 8–11.

Russian sources report that the shelling of Donetsk continues from 9 to 11 December.

The sides are actively using artillery in the Zaporizhzhia sector. Civilian infrastructure of the region suffers as a result of Russian shelling. In return, the Ukrainian Armed Forces have been using HIMARS to strike at the places of concentration of Russian troops in the temporarily occupied territories. According to the mayor of Melitopol Ivan Fedorov, on December 10, several explosions were recorded in the city in places of deployment of the Russian military. About 200 Russian servicemen were reported killed and wounded.

Russian troops continue shelling the right bank of Kherson region. Over the last days at least 4 people were killed and 21 civilians were wounded in the region. On December 11, Russian military shelled a critical infrastructure facility in Kherson, destroying several vehicles of power engineers. In addition, the children’s department of the hospital and residential infrastructure were damaged in Kherson.

As a result of the Russian shelling on the night of December 8, a fire broke out at the transport base in Mykolaiv, where public transport buses were stationed. In the evening of December 10, Russian troops shelled the territory of Mykolaiv region with MLRS.

On December 8, Russian troops launched a missile attack on Kharkiv region. Some of the missiles were neutralized by air defense forces, but 1 missile hit a private house. As a result, at least 4 people were injured. In the following days, the shelling of the territory of Kharkiv region continued, as a result of which 1 more civilian was wounded.

Russian troops resumed active use of Iranian drones in southern Ukraine. In particular, on the night of December 10, they attacked the territory of Kherson, Mykolaiv and Odesa regions using Shahed-136 and Shahed-131 UAVs. The Air Force of the Armed Forces of Ukraine reported that the air defense managed to shoot down 10 out of 15 kamikaze drones. However, the drone attack in Odesa region caused significant damage to several energy infrastructure facilities. As a result, power supply to all consumers, except for critical infrastructure, was cut off in Odesa, leaving about 1.5 million people without electricity.

Russian troops continue systematic artillery shelling of the border areas of Chernihiv and Sumy regions. In the evening of December 9, a rocket attack was recorded in Sumy region.

The shelling of Nikopol and Marhanets communities in Dnipropetrovsk region also continues. On the night of December 10, 4 people were injured in the area.

According to the Office of the Prosecutor General, as of the morning of December 10, as a result of the full-scale Russian invasion, the number of children affected in Ukraine increased to 1298 (443 children were killed, 855 were injured). According to the governmental platform Children of War, as of December 11, 13124 children were deported, 327 went missing. Minister for Foreign Affairs of Ukraine Dmytro Kuleba called on the International Committee of the Red Cross (ICRC) to help stop the forced displacement of Ukrainian children and prevent their illegal adoption.

The Verkhovna Rada Commissioner for Human Rights Dmytro Lubinets informed that 150 citizens of Ukraine, including civilians, are currently being held captive by Russian troops in Olenivka on the temporarily occupied territories of Donetsk region.

Another crime of the Russian military was the shelling of the State Emergency Service vehicle delivering humanitarian aid in the frontline town of Bakhmut, Donetsk region.

The press service of the Ministry of Internal Affairs of Ukraine stated that law enforcement officers have already provided stabilization measures, including recording of war crimes and work with the local population, in 568 liberated populated areas of the country. During the full-scale Russian invasion of Ukraine, law enforcement officers have recorded 47 thousand war crimes committed by the Russian military, including torture, rape and murder of civilians.

In particular, in Kharkiv region law enforcement officers exhumed the corpses of a father and daughter who were killed during the Russian shelling in their own yard. The bodies of 3 civilians were found in the de-occupied territory of Mykolaiv region. According to the conclusions of forensic experts, the victims had signs of torture and torture.

Ukrainian state nuclear energy company Enerhoatom confirmed the statements that Russia de facto uses the territory of Zaporizhzhia NPP as a weapons depot. The company said that the Russian military brought MLRS to the facility and placed them near the power unit. They probably planned to use them to shell Ukrainian positions and bridges on the right bank of the Dnipro River.

After the liberation of Kherson on November 11, Russian artillery regularly shells the city from the left bank of the Dnipro. According to the Regional Administration, 41 people have been killed in Kherson as a result of these attacks, and 96 people have been hospitalized. Also, the work on demining of territories continues in Kherson region, which is currently complicated by weather conditions. During the month of work of demining teams, several tons of mines were detected and removed. At the same time, some places (for example, the main police department of Kherson, where detainees were held and tortured) remain so mined that sappers cannot start their work.

The issue of mine threat does not lose its relevance in other regions of Ukraine. The State Emergency Service units inspected and cleared 76 hectares of territory and seized more than 300 thousand explosive devices. However, about 30% of the country’s territory still needs demining. On December 8, it was reported that a couple died in Zhytomyr region when their car exploded on a Russian mine.

The Minister of Education of Ukraine Serhii Shkarlet reported that since the beginning of the full-scale invasion of Russian troops on the territory of Ukraine more than 2.8 thousand educational institutions have been destroyed or damaged.

Head of the National Bank of Ukraine Andrii Pyshnyi informed that the National Bank expects that by the end of the year the volume of international assistance provided to Ukraine will exceed $31 billion. In addition, due to massive Russian attacks on energy infrastructure, the National Bank downgraded its GDP forecast for 2022 and 2023.

According to the Ministry of Economy, Russian attacks on energy infrastructure increased the rate of decline in Ukraine’s GDP in November 2022 to November 2021, to approximately 41%.

In recent days, Volodymyr Zelenskyi has had phone conversations with U.S. President Joseph Biden, President of the Republic of Türkiye Recep Tayyip Erdoğan, President of France Emmanuel Macron and Prime Minister of the United Kingdom Rishi Sunak. The main topics of the negotiations were the support of the Ukrainian initiative Grain from Ukraine, possible expansion of the “grain corridor”, implementation of the “peace formula” initiated by the President of Ukraine, synchronization of positions of the countries before the G7 summit. The parties also discussed cooperation in defense and energy security.

The United States imposed sanctions against the Russian Aerospace Forces and other Russian institutions for involvement in the illegal purchase of drones from Iran and their use in the war against Ukraine. The sanctions were also imposed against Russian officials involved in the filtering of the population in the temporarily occupied territories of Ukraine, torture, deportation of children, organization of the so-called pseudo-referendums and other crimes.

The United States announced a new package of assistance to Ukraine worth $275 million. It will include air defense equipment, ammunition for cannon artillery and MLRS, military and ambulance vehicles, medical equipment and generators. In addition, the United States has allocated $91.5 million to help Ukraine with demining. The Government of Slovakia has approved a new package of military assistance to Ukraine, which includes ammunition and winter equipment for the Armed Forces of Ukraine. Slovakia is also considering the possibility of resuming production of 120 and 155 mm shells to meet Ukraine’s needs, and plans to transfer 300 power generators to Ukraine this month.  Germany will build for Ukraine 18 RCH-155 self-propelled artillery systems, as well as transfer 80 pickup trucks, two hangar tents, 7 trucks and 90 units of anti-drone equipment. The Bulgarian Parliament approved the decision to provide military and military-technical assistance to Ukraine by a majority vote. Minister of Economy and Industry of Bulgaria Nikola Stoyanov said that it  involved light weapons and ammunition. Morocco, at the request of the United States, decided to transfer spare parts for T-72 tanks to Ukraine, becoming the first African state to provide military assistance to Kyiv.

On December 10, the EU Council adopted a proposal for a legislative package that will allow the European Union to provide Ukraine with financial assistance in the amount of €18 billion through 2023. These funds will be used to pay for Ukraine’s urgent needs, restore critical infrastructure and initial support for sustainable post-war recovery in order to support Ukraine on its path to European integration. In the future, the program should be approved by the European Parliament.

A number of countries have decided to provide financial and humanitarian assistance to Ukraine. Norway provided Ukraine with 1 billion kroner ($100 million) to rebuild civilian infrastructure damaged by Russian missile strikes. To restore Ukraine’s energy stability, the Netherlands donated transformers and equipment used to fix important energy infrastructure. In their turn, France, Georgia, Latvia, Slovakia, Germany, Azerbaijan announced the transfer of generators of various capacities to strengthen the stability of the Ukrainian energy sector.