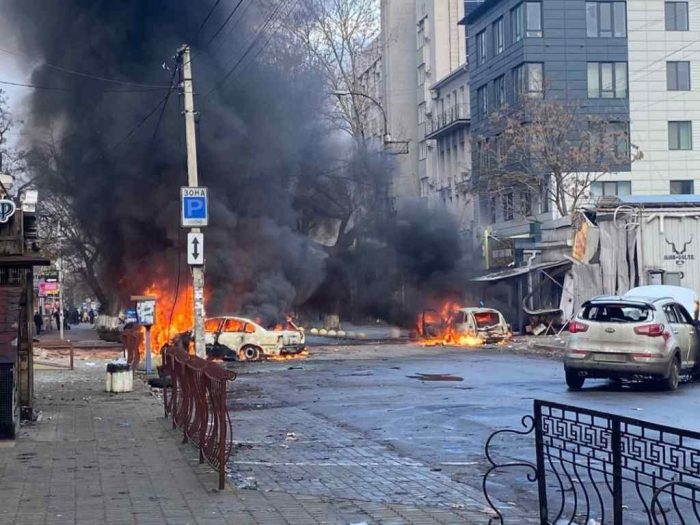 In recent days, the Armed Forces of Ukraine managed to advance towards Kreminna (Luhansk region). The liberation of this city will threaten the logistics of the Russian group in Sievierodonetsk and Lysychansk.

Heavy positional fighting continues around Marinka and Bakhmut in Donetsk region. Ukrainian troops are repelling all enemy attempts to capture these cities.

Russian troops carry out missile and artillery strikes on the border and frontline territories of Ukraine. Among them, a large-scale shelling of the central part of Kherson on December 24 caused the most civilian casualties (11 dead and 64 wounded).

On the night of December 26, an air alert was declared in the city of Engels (Saratov region), close to the Russian strategic aviation base. According to Russian media, after the UAV attack there was a fire at the military facility and at least 3 Russian servicemen were killed. This is the second attack on the airfield used by Russia to conduct missile attacks on Ukrainian infrastructure in December.

Active fighting is ongoing on the Svatove-Kreminna line. On December 25 Ukrainian troops managed to advance towards Kreminna. Ukrainian Armed Forces strike at the areas of concentration and command posts of Russian troops in Luhansk region and repel Russian counterattacks. The head of the Luhansk Regional Military Administration Serhii Haidai reported on the withdrawal of the occupation administration from Svatove, which may indicate the readiness of Russian troops to give up control over this town.

Severe positional battles are taking place in the Bakhmut sector. Russian troops keep assaulting, but are unable to break through the Ukrainian Armed Forces’ defenses. According to the experts of the Institute for the Study of War, serious losses incurred in unsuccessful attacks in recent days and the waste of artillery ammunition stocks may deplete the offensive potential of the Wagner PMC operating in this area.

Apart from Bakhmut area, active fighting in Donetsk region continues near Marinka, Avdiivka and Vuhledar. Russian troops continue shelling civilian infrastructure. On December 22 and December 25 rocket attacks were made on Kramatorsk; several attacks on Avdiivka (where a hospital was damaged) were also recorded. In total, at least 6 civilians were killed and 21 people were injured in the Donetsk region on December 22–25.

Russian troops are shelling the frontline areas of Zaporizhzhia region. They are building defensive structures and fortifications near Tokmak and Melitopol in anticipation of a counteroffensive by the Ukrainian Armed Forces. On the night of December 24, a suburb of Zaporizhzhia was struck. As a result, the building of an educational institution was damaged.

In the afternoon of December 24, Russian troops struck the center of Kherson. They targeted civilian areas – administrative buildings, a shopping center and a market. According to preliminary data, at least 11 civilians were killed and 64 people were injured. In addition, 3 more people were killed and 9 injured in the region during the day as a result of shelling.

On December 25, Russian strikes on the civilian infrastructure of Kherson region resumed. The head of Kherson Regional Military Administration Yaroslav Yanushevych reported that two medical institutions in Kherson were damaged as a result of shelling. In addition, the Russian army destroyed the only church in the village of Kyselivka, Kherson region.

In the evening of December 22, Russian troops struck at the outskirts of Kharkiv. They also continue shelling the Kharkiv region. In recent days, at least 1 person was killed and 6 people were injured in Kharkiv region as a result of shelling.

Russian troops are shelling the territory of Dnipropetrovsk region, namely the areas of Nikopol and Marhanets. The shelling of the border areas of Sumy region also persists. Civilian infrastructure and power lines suffer damage. In addition, on December 22 Ukrainian troops prevented an attempt by a Russian subversive reconnaissance group to cross the state border in Sumy region.

Russian shelling once again targets energy network facilities. DTEK company reported without specifying details that on December 23 one of its energy enterprises was hit, killing 1 employee and injuring 1 other person.

The Office of the Prosecutor General of Ukraine reported the opening of 5079 criminal proceedings on the facts of torture and other inhuman treatment committed by the Russian military and their accomplices during the full-scale invasion of Ukraine. After the retreat of Russian troops, 54 torture chambers were found in the de-occupied territories of Ukraine. Currently, pre-trial investigations are underway as part of 855 criminal proceedings on war crimes against children related to the armed aggression of the Russian Federation against Ukraine, including 10 cases of sexual violence.

In general, during the full-scale invasion of Russia, the National Police initiated more than 51 thousand criminal proceedings on the facts of crimes committed by the Russian military and their accomplices.

Ukrainian law enforcement officers are discovering new evidence of crimes committed by the Russian military in Ukraine. The press service of the Ministry of Internal Affairs of Ukraine reported the discovery of 36 new graves of civilians and servicemen in a mass grave in Kherson. Another grave with 6 bodies with signs of torture was found near Kherson.

On December 24, 3 employees of the State Emergency Service of Ukraine died in Kherson region because of mined areas; another person was injured in Kharkiv region.

Russian troops are organizing the demolition of damaged buildings in the temporarily occupied Mariupol, thus destroying evidence of crimes against civilians. Advisor to the mayor Petro Andriushchenko announced the demolition of the drama theater, which was used by civilians as a bomb shelter during the fighting for the city and became the target of a Russian air strike.

Associated Press journalists analyzed satellite images of the temporarily occupied Mariupol and its surroundings, including the cemetery in the village of Staryi Krym. During the period of large-scale hostilities from March to December, at least 10300 new graves were recorded at the burial sites. At the same time, some graves are marked with several numbers, which may indicate the presence of more than one burial.

In the temporarily occupied territories of Zaporizhzhia region, Russian troops are strengthening regime and administrative measures. A curfew was introduced in the town of Vasylivka for the period from December 28 this year to January 4, 2023. Local residents are prohibited from leaving their homes and moving around the settlement. Also, the Russian military continue to exert pressure on the civilian population of the region. Melitopol Mayor Ivan Fedorov reported that about 200 more children were taken to Russia for so-called “holidays” for an indefinite period.

On December 22, a representative of the local occupation administration was killed in Kherson region. He died as a result of a car explosion.

On December 23, a car was blown up in Melitopol (Zaporizhzhia region). As a result, one of the representatives of the pseudo-law enforcement bodies created by the occupation administration was injured.

The U.S. Senate approved the budget for 2023, which provides for the allocation of $44.9 billion to support Ukraine. Key expenditure items in this sphere include up to $14.5 billion for the transfer of property from military stocks to Ukraine by the President’s decision; $9 billion for the purchase of military assistance for Ukraine; $13.37 billion in financial support.

According to the Minister of Economy Yuliia Svyrydenko, constant power cuts and the transition of businesses to alternative energy sources may lead to an increase in inflation by 1-2% in 2023. Yuliia Svyrydenko also suggests that given the current situation, there is a high probability of making changes to the state budget for the next year. The previous estimate of GDP decline at 32% in the next forecast may be revised to the range of 33.2-33.5%.

Turkish Defense Minister Hulusi Akar informed that since the launch of the Black Sea Grain Initiative, more than 15 million tons of food have been exported from Ukraine.

After the visit to the United States, on his way back to Ukraine, President Volodymyr Zelenskyi met with President of Poland Andrzej Duda. The leaders discussed the development of bilateral relations between the countries, strengthening defense capabilities and resolving humanitarian issues. Also, the President of Ukraine had a phone conversation with Prime Minister of the Netherlands Mark Rutte and discussed the implementation of the Ukrainian peace formula, investigation of Russian war crimes and bringing the perpetrators to justice, as well as the increase of defense support. After the conversation, Mark Rutte declared his readiness to allocate €2.5 billion to help Ukraine in 2023.

On December 23, at the annual Conference of Ambassadors, Volodymyr Zelenskyi announced the establishment of the Ukrainian Agency for International Assistance. The President also stressed the need to develop relations with African countries, in particular, it is planned to open new embassies and the Ukraine-Africa Trade House with representative offices in several countries on the African continent.

On December 22, an online meeting of G7 ministers was held to discuss strengthening Ukraine’s air defense and restoring its energy stability. Based on the results of the meeting, the joint statement confirms the allocation of financial support to Ukraine for the next year in the amount of $32 billion.

The European Commission provided Ukraine with €66 million for the reconstruction of Ukrainian schools destroyed during the Russian shelling. The UK allocated a loan to Ukraine through a World Bank project worth $500 million. The funds will be used to reimburse state budget expenditures for social assistance payments.

The Estonian government has approved a new package of military aid to Ukraine, which includes UAVs, winter uniforms and personal protective equipment. Germany continues to transfer military equipment to Ukraine, in particular, armored repair and evacuation vehicles and cars. The Ministry of Defense of Denmark reported that Copenhagen would allocate an additional 300 million Danish kroner (about $43 million) to the fund for the purchase of weapons and equipment for Ukraine.

Partner states continue to support Ukraine amid the energy crisis due to constant shelling of critical infrastructure by Russian troops. The UK donated more than 900 generators and sent approximately 15,000 sets of extreme cold weather kits (clothing, tents and sleeping bags) to the Armed Forces of Ukraine. The United Arab Emirates will send 2500 generators to Ukraine for the needs of civilians. The President of the European Commission Ursula von der Leyen announced that the European Union intends to transfer another 900 generators to Ukraine.

On December 22, the United States imposed sanctions against 10 Russian naval structures in response to Russian military operations that threaten the functioning of Ukrainian ports.