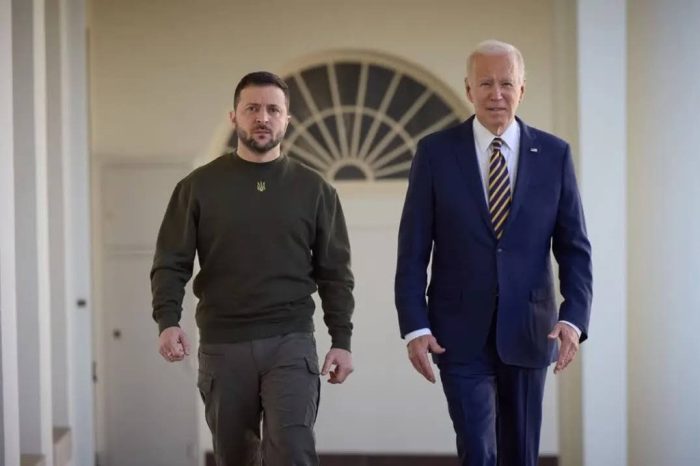 President of Ukraine Volodymyr Zelenskyi made his first foreign visit since the beginning of the full-scale Russian invasion – to the United States of America. During the visit, Zelenskyi met with the U.S. President Joseph Biden and delivered a speech in Congress, where he thanked for the bicameral support for Ukraine. For 2023, the United States plans to allocate almost $45 billion in support to Ukraine.

The day before, on December 20, Zelenskyi arrived in the town of Bakhmut, where the fiercest fighting is currently taking place. In recent days, the Armed Forces of Ukraine managed to repel the attacks of the Wagner PMC on the eastern outskirts of the city and stabilize the situation at the front.

Apart from Bakhmut, positional fighting continues near Avdiivka (Donetsk region) and on the Svatove-Kreminna line (Luhansk region). Intense shelling is ongoing in other parts of the frontline. Russian troops strike at the civilian infrastructure of the frontline and border regions of Ukraine.

Ukrainian power engineers are trying to restore critical infrastructure after a massive kamikaze drone attack on the morning of December 19 (35 drones in total). The situation in the energy sector remains highly challenging. There are serious problems with energy supply in central Ukraine, primarily in Kyiv and Kyiv region.

At the meeting of the board of the Ministry of Defense of the Russian Federation, Sergei Shoigu proposed to increase the conscription age and to call up citizens aged 21 to 30 for conscript service in the Russian army. He also proposed to increase the number of Russian armed forces to 1.5 million people (increase by 350 thousand people). The next wave of mobilization in Russia may begin in January 2023.

Fighting is raging on the Svatove-Kreminna line, as a result of which the AFU managed to advance towards Kreminna. The head of the Luhansk Regional Military Administration Serhii Haidai reports that the Russian military is failing to regain the lost positions, despite their counterattacks.

Russian troops continue assault actions in the Bakhmut and Avdiivka directions. Shelling of the civilian infrastructure of Donetsk region does not cease, as a result of which at least 5 people were killed and 16 people were wounded on the territory of the region over the period of December 19–21.

In Zaporizhzhia sector, the Ukrainian Armed Forces keep actively using high-precision weapons against the military infrastructure and bases of the Russian military. According to the mayor of the temporarily occupied Melitopol Ivan Fedorov, two explosions were recorded in this city on December 19. Russian media reported that they occurred in the places where Russian troops are based.

Russian troops are systematically striking the right bank of Kherson region, using rocket weapons, rocket and cannon artillery. On December 19, Russian troops shelled the building of the Kherson Regional Military Administration again, damaging critical infrastructure and a number of residential buildings. According to preliminary information at least 2 people were killed, 3 more local residents were injured. On December 20, 1 person died and 6 people were injured as a result of shelling in Kherson region. On December 21, the Russian military struck at energy facilities in Kherson.

In addition, on December 21, Russian troops shelled the town of Ochakiv in Mykolaiv region. The attack left at least 3 people injured.

Russian troops continue systematic artillery shelling of the border areas of Chernihiv and Sumy regions, as well as the territory of Kharkiv region, where at least 1 person was wounded in the city of Vovchansk.

The shelling of Nikopol and Marhanets communities in Dnipropetrovsk region also persists.

As a result of the Russian massive attack on the energy infrastructure of Ukraine with the use of kamikaze drones on the morning of December 19, the country is experiencing substantial problems with energy supply. A tough situation is observed in Kyiv and Kyiv region, where emergency power cuts have been introduced and blackouts have taken place in some districts. As a result of shelling 60% of power transformers in the capital of Ukraine were damaged or destroyed.

The Office of the UN High Commissioner for Human Rights updated the data on civilian casualties as a result of the full-scale Russian invasion of Ukraine. As of December 19, the confirmed losses amount to 17595 people (6826 killed, 10769 wounded). According to the governmental platform Children of War, as of December 21, 13613 children were deported, 332 went missing.

Another mass grave of people killed by the Russian military was found on the liberated territory of Kherson region. 7 bodies of the dead were identified, including one child. Meanwhile, the process of identifying bodies from graves in the de-occupied territories is ongoing. Currently, more than 200 recovered bodies in Kharkiv region still remain unidentified.

Ukrainian citizens are being evacuated from the territories where active hostilities are taking place. According to the Ministry for Reintegration of the Temporarily Occupied Territories of Ukraine, about 87 thousand citizens have been evacuated from the dangerous regions of the country in recent months. In particular, more than 43 thousand people left Zaporizhzhia region, about 34 thousand moved out of Kherson region, about 5 thousand – out of Donetsk and Luhansk regions, more than 5 thousand – out of Kharkiv region.

The mine threat in the territories liberated from Russian occupation remains particularly urgent. Several new cases of mine explosions were recorded in Kherson and Kharkiv regions.

The World Health Organization reported that the intensification of Russian attacks on the Ukrainian power grid and other critical infrastructure endangers the lives of medical workers and thousands of patients. WHO Representative in Ukraine Jarno Habicht said that Russia has attacked more than 700 healthcare facilities since the invasion of Ukraine on February 24.

On December 21, U.S. President Joseph Biden announced that the United States will provide more than $374 million in additional humanitarian assistance to Ukraine  through the U.S. Agency for International Development (USAID). The assistance will be aimed at overcoming the consequences of Russia’s persistent attacks on civilian and critical infrastructure in Ukraine and providing millions of people in the most affected areas with water and food, sanitation, housing repairs, etc.

The Ministry of Culture and Information Policy of Ukraine informs that as of the beginning of December, as a result of the Russian aggression in Ukraine, 1132 objects of cultural infrastructure were damaged, 403 of them were completely destroyed. The greatest losses and damage to cultural heritage was inflicted across Donetsk, Kyiv, Kharkiv, Luhansk, Mykolaiv, Zaporizhzhia, Sumy and Kherson regions.

The National Bank of Ukraine reported that the IMF management approved the Program Monitoring involving the Board of the Fund for Ukraine, which will last four months and will be a prerequisite for the provision of a new IMF financing program. The program provides for a number of measures to strengthen the mobilization of state budget revenues.

The World Bank approved the allocation of $610 million to meet the urgent needs of Ukraine. The new assistance package includes additional funding to support essential public services. The allocated funds will help the Government of Ukraine to finance expenditures related to the payment of assistance to families with children and salaries to civil servants. A separate package provides funds to support the health care system. Since the beginning of the war, the World Bank has mobilized $18 billion in emergency funding to support Ukraine, of which $15 billion has already been disbursed.

According to Bloomberg calculations, in the first week after the start of the mechanism of limitation of prices for Russian oil, introduced by the G7 countries, oil exports from Russia fell by 54%. After that, the Russian ruble exchange rate against foreign currencies began to fall sharply for the first time since the spring of 2022.

On December 20, President of Ukraine Volodymyr Zelenskyi visited Bakhmut, a frontline city of Donetsk region, where heavy fighting has been going on in recent months. He met with the military who are holding the defense and presented them with state awards.

After visiting Bakhmut, Volodymyr Zelenskyi left for the United States on December 21. This is his first official visit to a foreign country since the full-scale invasion. Volodymyr Zelenskyi held talks with the U.S. President Joseph Biden. The leaders discussed comprehensive cooperation between the two states, in particular on strengthening the stability and defense capabilities of Ukraine, supporting its sovereignty and restoring its territorial integrity. Also, the President of Ukraine delivered a speech at the joint session of the two chambers of the U.S. Congress calling for further support for Ukraine and stated that there could be no compromises on the territorial integrity and sovereignty of Ukraine in order to achieve a just peace. During his speech in Congress, Zelenskyi handed the congressmen a battle flag brought from Bakhmut.

Ukraine’s allies continue to help in the fight against the aggression of the Russian Federation by providing military and defense assistance. The Government of Denmark has decided to allocate 300 million Danish kroner (almost $43 million) for the purchase of weapons and equipment for Ukraine. The Ministry of Defense of Finland announced the provision of a new batch of military aid to Ukraine worth €28.8 million.

Through the mechanism of the administrative account of the International Monetary Fund, the Netherlands provided Ukraine with €200 million of credit funds. Moreover, in the framework of the loan agreement, Ukraine received additional CAD 500 million from Canada to be used to finance priority expenditures of the state budget.

Energy Ministers of the European Union agreed to set a cap on gas prices, which will stabilize the sharp rise in energy prices in Europe and in the world. Currently, the maximum cost of natural gas will be €180 per MWh. The limit may be introduced from February 15 and initially will not apply to OTC transactions.

The Canadian government announced the start of the process to seize and confiscate $26 million from Granite Capital Holdings Ltd, a company owned by sanctioned Russian oligarch Roman Abramovich. The confiscated assets may be used to rebuild Ukraine and compensate the victims of the Russian invasion. In this case, it will be the first case of using the funds confiscated from the Russian Federation and Russian oligarchs to compensate for the damage caused by Russian aggression.