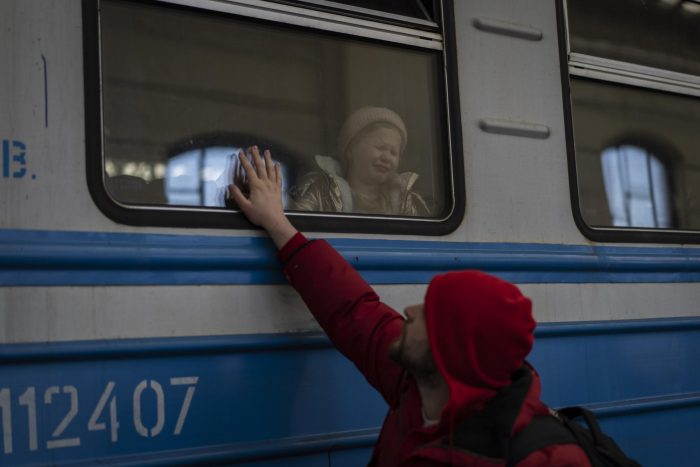 As of 8:00 am on March 23, 2022, 37 civilians were killed in the Russian invasion (excluding all victims in Mariupol, Volnovakha, Kyiv, Luhansk, Kharkiv, Kherson, Chernihiv and Sumy regions), including 2 children.  44 were injured, including 6 children.  Six civilians were captured, and according to official information, more than 20 civilians were abducted or taken prisoner, mostly local government officials in Russian-occupied cities and Ukrainian activists.

On March 22, Russian troops seized a convoy of evacuation convoys – 11 buses and 2 vehicles of the Emergency Service.  The fate of 11 drivers and 4 rescuers is unknown.  The humanitarian corridor was agreed with the Russian side.

On March 22, Russian aircraft dropped two powerful bombs on Mariupol.  From the Sea of ​​Azov the city is shelled by 5 Russian warships.

SAVEChernihiv since the beginning of Russia’s full-scale invasion of Ukraine, the city is surrounded by Russian troops.  Currently, the humanitarian situation in Chernihiv is catastrophic and is approaching the situation in Mariupol.  Chernihiv is under blockade, Russian troops practically do not open humanitarian corridors.  The city has no water supply, electricity and heat.  It is not possible to provide the necessary medical care to the injured locals.  Lack of drinking water, food, basic necessities.  The main exit from Chernihiv to Kyiv has been mined by Russian troops.

SAVETrostianets is a city occupied by Russian troops and surrounded.  Civilians can hardly leave the city.  This is dangerous because the occupiers are opening fire on civilians.  Many areas have no electricity or heat.  The exact number of victims cannot be determined, the dead lie in the open air and it is not possible to bury them.

As of March 22, 117 children were killed and 155 wounded, according to incomplete information on Russia’s full-scale war against Ukraine’s population, according to the Office of the Prosecutor General of Ukraine.

6 civilians were detained and taken prisoner, mostly heads of local authorities of the settlements occupied by Russian troops:

1. Oleksandr Ponomaryov, a People’s Deputy of Ukraine from the Opposition Platform for Life party, was taken prisoner in Berdyansk (Zaporizhzhya Oblast), which is temporarily occupied by Russian troops.  The party has always supported the pro-Russian vector of politics (former leader V. Medvedchuk), two days ago the party’s activities were suspended by a decision of the National Security and Defense Council of Ukraine.

2. In the Kherson area the head of the village of Stara Zbur’evka – Victor Mironyuk is kidnapped by the Russian military

3. In the city of Tokmak (Zaporizhzhya region) a deputy of the local council Olena Plaksina was taken prisoner.

4. In the Zaporizhia region, the Russian military captured the chairman of the Azov local council, Andriy Solopov, and Dmytro Bodyu and Serhiy Priyma had been abducted earlier.

The day before he was taken prisoner (information to be specified):

• In the Kherson region, the mayor of Berislav – Alexander Shapovalov.  He was abducted by the Russian military along with a local activist (name unknown).

• In the Chernihiv region by the Russian military, the village head Mykola Budalovsky, deputy and school principal Tetyana Bezlyudna.

• Mykola Sykalenko, the head of the Tsyrkunivka village council, was abducted in Kharkiv region.

Kyiv – 1 civilian was killed and 3 were injured in rocket attacks on residential areas of the capital.

Bucha (Kyiv region) – On March 17, the Russian military killed a father in front of his son (14 years old), the child was wounded.

Kostiantynivka (Donetsk region) – 2 civilians were wounded in the airstrike.

Mariupol – confirmed the death of 1 local resident and the injury of 2 people.

Dnipropetrovsk region: 1 person was killed and 2 were injured.

Pavlograd (Dnipropetrovsk region) – 1 person was killed and 1 was injured in an airstrike on the city’s railway station.  The railway station was destroyed.  The movement of trains is disrupted.

Zaporizhzhia region: 1 person died, the number of wounded is being clarified.

Kamyanske (Zaporizhzhya region) – as a result of long and massive shelling of residential buildings, 1 person died, the number of wounded is unknown.

Nikolaev – the number of victims as a result of attack on March 21 increased.  It became known that 3 civilians were killed, 1 person was wounded.

Luhansk region: 11 people died, 12 were injured (information is being specified)

Severodonetsk (Luhansk region) – 2 people were killed and 10 were injured in a Russian airstrike on civilians queuing on the street.

According to official figures, at least nine civilians were killed and two were injured in massive shelling from March 17 to 21 in Rubizhne and Popasna (Luhansk Oblast).  The information is constantly updated.

Lozova (Kharkiv region) – 1 civilian was killed and 9 were injured in shelling of residential buildings by Russian troops.

Kharkiv region – according to official information, 6 civilians were killed in different cities of Kharkiv region.  In addition, the Russian military shot dead a civilian car in which the family was driving.  Three people died – parents and 1 child (9-year-old girl), the boy was injured (17 years old)

Ivanivka (Chernihiv region) – two civilian cars exploded on mines.  The Russian military “allowed” two families of local residents to “evacuate” from the occupied village on a mined road.  The first and second cars exploded on Russian-planted mines.  4 people were killed (all adults), 4 children were injured.