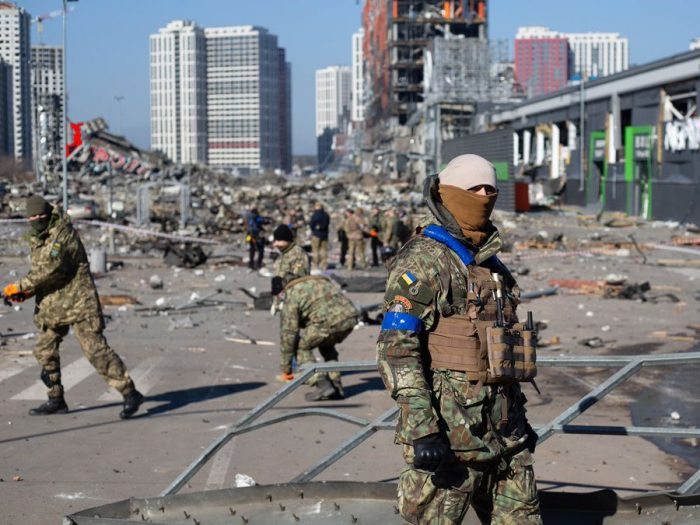 On the night of March 22, the Ministry of Defense of Ukraine announced that the city of Makariv (Kyiv region) had been liberated from the Russian military.

The Prosecutor General’s Office said that Russian troops fired artillery at the city of Brovary in the Kyiv region.  The shell fell on the territory of one of the factories, damaging 7 buses and outbuildings.  During the shelling of the Brovary district of Kyiv region, a vegetable storehouse and a sausage shop were destroyed.

The Russian military looted and destroyed the newest Central Analytical Laboratory in Chernobyl.  This was reported by the State Agency of Ukraine for Exclusion Zone Management.

The State Emergency Service of Ukraine reports that a truck and two buildings caught fire in the Obolonskyi district of Kyiv as a result of the shelling.  1 person was killed and 3 others were injured.

A large-scale fire broke out in the town of Trostyanets, Sumy region, and street fights continue.  This was announced in a video message by the head of the Sumy Regional Military Administration, Dmytro Zhyvytskyi.

On the morning of March 22, the head of the Kharkiv Regional Military Administration Oleg Sinegubov announced the failure of attempts by Russian troops to advance towards Kharkiv.  According to him, 84 strikes of various kinds were inflicted on Kharkiv region last night.

According to the mayor of Lozova in the Kharkiv region Serhiy Zelensky, 4 blows were inflicted on the city’s industrial enterprises.  As a result of the shelling, about 20 private houses were destroyed.  1 person was killed and 9 others were injured.

According to the head of the Luhansk Regional Military Administration, Serhiy Haidai, Russian troops fired on a supermarket in Severodonetsk, where people were staying.  The number of dead and wounded is being clarified.  Also, according to Gaidai in the Luhansk region for days the military of the Russian Federation destroyed 15 houses.  The Russians concentrated almost all the shelling on Rubizhne, Lysychansk, and Severodonetsk.  Sergei Gaidai also said that Russian troops fired from a plane at the Lysychansk refinery.

According to the head of the military administration of Kryvyi Rih Oleksandr Vilkul, on the night of March 21-22, in the Kryvyi Rih district, the Russian military fired on the town of Zelenodolsk and the village of Mala Kostromka in the suburbs from Grad.  According to preliminary data, no one was killed.

The head of the Dnipropetrovsk Regional State Administration Valentyn Reznichenko at 18:20 reported a missile strike on the city of Pavlograd.  The Pavlograd-2 railway station was destroyed, 15 freight cars derailed. 1 person died.

The Armed Forces of Ukraine once again struck at Russian troops stationed at the airfield in Chornobayivka near Kherson.

SES of Ukraine in the morning reported that as a result of attack by Russians of gas station in Nikolaev which was made last days, 3 men were lost, and 1 woman suffered.

In Administration of seaports told that in the night from March 21 to March 22 the Russian military struck blow on seaport of Nikolaev.  According to preliminary information, the port infrastructure has suffered significant damage, no one was injured.

Soldiers of the 80th separate airborne assault brigade of the Armed Forces of Ukraine reported destruction of the Russian cruise missile in the sky over the Nikolaev area.  The rocket was aimed in the direction of Kropyvnytskyi.

The head of the Vinnytsia Regional State Administration Serhiy Borzov published a photo of a Russian missile shot down in the Vinnytsia region.

According to the head of the Rivne Regional Military Administration Vitaly Koval, in the evening in the Rivne region, Russian troops struck three times on the object of military infrastructure.

The hacker association Anonymous hacked the database of one of the world’s largest food companies, Nestle, because of its position on continuing to work in Russia despite the war against Ukraine.

The websites of the Kremlin and the Russian government have once again been hacked and suspended.

Deputy Prime Minister for the Reintegration of the Occupied Territories Iryna Vereshchuk said that representatives of the so-called “DPR” seized a convoy of evacuation buses moving through an agreed humanitarian corridor from Mariupol.  According to Vereshchuk: “At least 100 and more thousand (people) want and cannot leave.  In fact, there is no corridor as such.  And those that are, they are only for cars, and for those who can walk.  Mariupol remains under constant fire from Russian troops, and people have not come out of hiding for weeks.  The city ran out of food, basic necessities, water, medicine.  No gas, electricity, heating.

The Commissioner for Human Rights of the Verkhovna Rada of Ukraine Lyudmila Denisova stated that there is no electricity, water, or gas in Chernihiv.  It is impossible to fix all this due to constant shelling.  About 130,000 people remain in the city, including the sick and infirm.  It is also reported that departures from Chernihiv to Kyiv are mined.

The Office of the Prosecutor General informs that as of March 22, 117 children were killed and more than 155 were injured in Ukraine.

The head of the Holoprystan City Council, Oleksandr Babych, reported the abduction of the head of Stara Zburivka in the Kherson region and one resident.

The Russian military released hromadske journalist Victoria Roshchina.  The condition of her release was a recording in which she denied her claims to the Russian services that held her captive and said that they had saved her life.  After a week of captivity, the head of the Okhtyrka district council, Serhiy Kirichko, was also released.

7 centers of natural fires have been registered on the territory of the Chornobyl zone.  The fire was probably caused by a shell or arson.

Roman Prymush, Deputy Head of the State Emergency Service, informs that since February 24, about 3,780 residential buildings in Ukraine have been partially damaged and 651 completely destroyed.

According to the UN, the number of Ukrainians who have left Ukraine since the beginning of the Russian invasion is 3,556,924.

Residents of Kherson continue to protest against the capture of the city by Russian troops.  In particular, on March 22, the Russian military used tear gas to disperse a peaceful rally in Kherson.

The NBU reported that over the past two months, Ukrainian banks have increased profits by 41%.

The Ministry of Economy reported that the Government has transferred more than 7,6 billion hryvnas of support to help Ukrainians who lost their jobs due to the war and are in the areas where the most active hostilities are taking place.

On March 22, President of Ukraine Volodymyr Zelensky addressed the Italian Parliament, the Senate and Prime Minister Mario Draghi.  The President addressed the Italian people, spoke about the situation in Ukraine after the Russian invasion, and called for the blockade of all real estate, assets and accounts of Russian influential people in Italy.  Volodymyr Zelenskyi stressed once again the need to end the war as soon as possible and start rebuilding Ukraine.

On the same day, President Volodymyr Zelensky spoke with the Pope, in particular about the difficult humanitarian situation in Ukraine and the blocking of humanitarian corridors by Russian troops.  The President thanked the Pontiff for his support and prayers for Ukraine.

In addition, Volodymyr Zelensky had a telephone conversation with the Prime Minister of Canada Justin Trudeau, discussing the shelling of civilian infrastructure by Russian troops, the humanitarian catastrophe, especially in Mariupol, and the issue of effective security guarantees for Ukraine.

US President Joe Biden held talks with the leaders of France, Germany, Italy and the United Kingdom, discussing Russia’s military action against the civilian population in Ukraine, as well as continuing defense and humanitarian support for the Ukrainian people.

A virtual meeting of the initiative group of the new interparliamentary network U4U – United for Ukraine took place in Brussels, uniting more than 110 parliamentarians from 28 countries who actively support Ukraine both in their own countries and  at the international level.  The U4U network will serve as an international platform for democratic lawmakers who intend to regularly exchange ideas and coordinate international initiatives for a joint response to the Russian invasion of Ukraine.

The Congress of Local and Regional Authorities of the Council of Europe unanimously adopted a declaration with the strong support of Ukraine, condemning Russia’s military aggression.  The declaration was adopted as a final document based on the results of the debate on the situation in Ukraine at the 42nd session of the Congress in Strasbourg.

Poland has already frozen 140 million zlotys as part of anti-Russian sanctions, according to Government Secretary Piotr Mueller.  In addition, according to Italian Prime Minister Mario Draghi, the Italian government has frozen the assets of Russian oligarchs close to Russian President Vladimir Putin by more than 800 million euros.

The information in the digest is collected from official sources – reports of state authorities of Ukraine, Ukrainian and international news agencies.  The accuracy of the data is carefully checked by the project team and corrected in case of fake news.