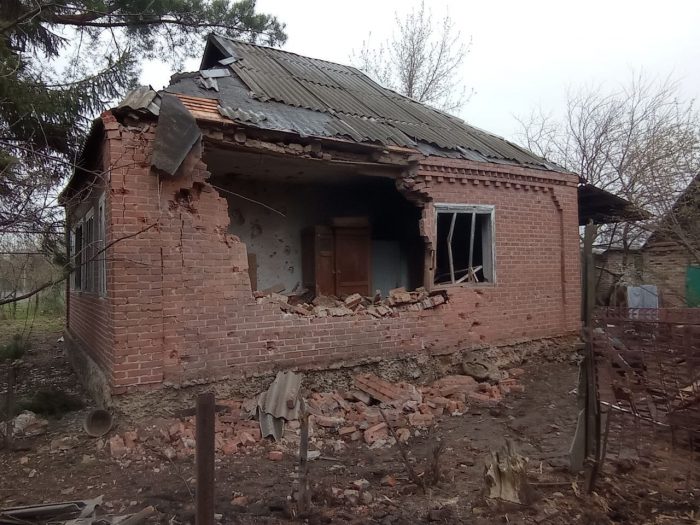 As of 8:00 a.m. on April 20, 2022, during the last 24 hours, 39 civilians had been killed due to the Russian invasion, among them 1 child (excluding all victims in Mariupol, Volnovakha, Kyiv, Luhansk, Kherson, Kharkiv regions). 80 people were injured, including 3 children. 1 civilian was captured, and totally more than 300 civilians were kidnapped by the Russian troops, they are mostly journalists, local government officials of the occupied settlements, the Ukrainian activists, teachers as well.

As of April 19, due to the Russian full-scale invasion against the population of Ukraine, 205 children were killed and 367 were wounded, according to the data of the Office of the General Prosecutor of Ukraine.

One civilian was captured by the Russian troops in the occupied settlements:

In Tockmak (Zaporizhzhia region) – it has been known on April 13 the Russian military kidnapped Vadym Pyshnenko – a local resident. Currently his fate is unknown. Someone has said that the Russian occupiers brought him to Melitopol.

Terror in the occupied Kherson region:

According to Kherson’s residents, the Russian military are trying to conduct a so-called “referendum” on creation one more fake republic – the “Kherson people’s republic” (“KhPR”) like “DPR” and “LPR” in Donetsk and Luhansk regions of Ukraine in 2014. According to the data of the Main Intelligence Department of the Ministry of Defense of Ukraine, the occupying forces are already printing lists, bulletins, brochures, and posters for the so-called “referendum.” Fully apparent it will be not a real referendum. Everything will take place according to the scenarios of the occupied Crimea and “LDNR” – the opening of several “polling places”, the creation of a picture for Russian and international media, and lists of people will be used who were registered during receiving humanitarian aid. It can be said at once that the so-called “referendum” and “decisions” will be absolutely fake, because the residents of Kherson have been openly resisting it throughout the Russian occupation. Dozens of peaceful rallies of civilians against the Russian occupation, the refusal of teachers to accept the Russian educational programs, some schools’ directors even dismissed from their positions just to have no cooperation with the occupying forces.

In addition, the abduction and apprehension of local activists, as well as the mining of roads, forest territories and fields, are continuing. It is now known that near Kherson, the Russian military confiscated all agricultural machinery and fuel in the farm and mined fields to make it impossible to plant.

Kyiv region: 8 civilians killed, 1 child was among them (incomplete information).

Yasnohorodka (Kyiv region) – it has become known that in early March, the Russian military killed a local priest.

Irpin (Kyiv region) – a truck exploded on a mine, the driver died.

Peremoha (Kyiv region) – it has become known that the Russian military shot a group of women and children who wanted to leave the village, where hostilities were continuing. The Russians let cars with women and children to pass through the checkpoint, even waved their hands, and then started firing. 7 civilians were killed, including a 13-year-old boy. His hat and jacket have numerous bullet holes.

Kramatorsk (Donetsk region) – 1 civilian was killed and 2 were injured.

Polohy (Zaporizhzhya region) – A 12-year-old girl received significant injuries as a result of an explosive wave of shelling. For two days it was not possible to provide her with qualified medical care. However, in two days rescuers managed to transport her to a hospital in Zaporizhzhia.

Luhansk region: 10 people were killed and 1 civilian was injured. It is impossible to provide accurate information, because active hostilities are lasting, the dead are staying under the Sky outside, if they can be buried, just in the yards of residential houses.

Lysychansk (Luhansk region) – it has become known that 10 civilians died at once in the shelling.

Rubizhne (Luhansk region) – 1 civilian was wounded in the shelling.

Mykolaiv region: due to the shelling 10 civilians were wounded (data are being clarified).

Bashtanka (Mykolaiv region) – the Russian military shelled by the multiple launch systems a hospital in Bashtanka, there are no victims, however there are wounded, their number is being estimated.

Kharkiv –the Russian shelling of residential buildings in the Moscow district of the city by multiple launch rocket systems “Hurricane” killed 4 people, wounded 14 civilians. Also, 3 people died and 21 were injured in the other four districts of Kharkiv. In early March, the Russian military killed 2 employees of the well-known Kharkiv Zoo “Ecopark”.

Kharkiv region – 4 civilians were killed and 26 were injured in the shelling.

Kherson region: 4 civilians were killed, 2 people were injured, including a teenager.

Rybalche (Kherson region) – a woman died in the Russian shelling, two children were left without a mother.

Parysheve (Kherson region) – the Russian military shot at civilians with shotguns. A 74-year-old man and a 16-year-old boy were injured.

Cair (Kherson region) – the Russian military shot dead a local resident at a checkpoint (a man simply came to the checkpoint).