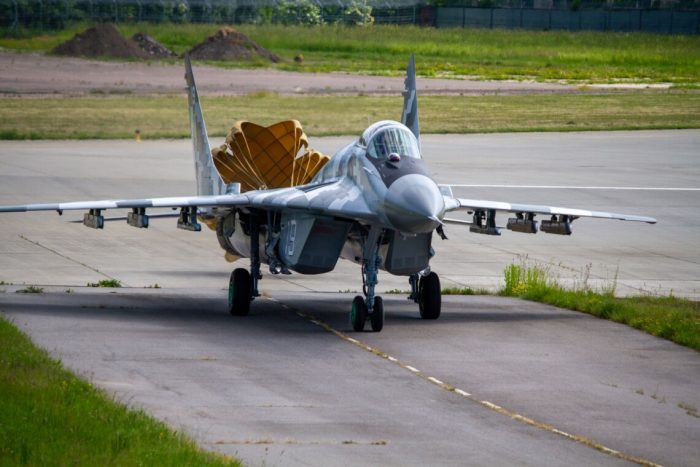 The Russian Army is trying to break the defense of the Armed Forces of Ukraine in the East. At the same time, strikes on civilian and military infrastructure continue, mainly in the eastern and southern regions of Ukraine.

Russian troops continue strikes in Kharkiv, trying to hit units of the Ukrainian Armed Forces and critical infrastructure facilities. Oleh Syniehubov, head of the Kharkiv Regional Military Administration, reports that the Kyivskyi and Industrialnyi districts of the city were shelled from MLRS, killing 3 people and wounding 21. The Derhachi and Chuhuiv districts of Kharkiv region were also shelled.

In the Izium area, Russian troops attempted an offensive in the southern direction (on Sulyhivka and Dibrivne). The General Staff of the Armed Forces of Ukraine reports that the attack was repulsed.

Active hostilities continue on the front line of Luhansk region. It is most intense near the town of Kreminna. The General Staff of the Armed Forces of Ukraine also reports an offensive by Russian troops to advance deeper into the town of Popasna and attempts to storm Sievierodonetsk and Rubizhne.

The Luhansk Regional Military Administration records fires in Novodruzhesk, Lysychansk and Kreminna due to shelling by Russian troops. A high-voltage line was also damaged. 215 population centers were left without electricity.

Russian troops concentrated their efforts on storming the Azovstal plant in Mariupol. According to Sviatoslav Palamar, deputy commander of the Azov Regiment, heavy-duty Russian bombs are being dropped on the plant, and many people are under the rubble.

In the north of the Donetsk region, Russian troops are preparing for an offensive in the direction of the town of Lyman. Fighting continues near the settlements of Torske and Zelena Dolyna. Russian military equipment is spotted near the villages of Zarichne and Yampil. In the south of the region, fighting is taking place near the settlements of Velyka Novosilka and Rivnopil.

According to the Donetsk Regional Military Administration, Russian troops continue shelling in Marinka, Ocheretyne and Avdiivka directions. There was also a missile strike on Kramatorsk. As a result of Russian shelling in Donetsk region 3 people were killed (in Kramatorsk, Avdiivka and Blahodatne), 5 more civilians (including 1 child) were wounded.

Ukrainian units launched a counterattack near Marinka. According to the General Staff of the Armed Forces of Ukraine, they fully regained control of this town.

The head of the Zaporizhzhia Regional Military Administration Oleksandr Starukh reports an intensification of hostilities in the region, particularly in the direction of Polohy.

The Armed Forces of the Russian Federation fired on the city of Zelenodolsk in Kryvyi Rih district (Dnipropetrovsk region) from MLRS. A multi-storey residential building, a school building, agricultural machinery and other facilities were damaged.

In the Kherson region, fighting continues in the area of Oleksandrivka.

The mayor of Mykolaiv Oleksandr Sienkevych clarified the data on the shelling of the city on the night of April 18-19. According to him, 2 people were wounded during the night shelling.

Chairman of the Mykolaiv Regional Council Hanna Zamazieieva reported that a hospital in the town of Bashtanka in Mykolaiv region was shelled. According to preliminary information, there were wounded.

The Main Directorate of Intelligence of the Ministry of Defence of Ukraine reports preparations for “pseudo-referendums” in the seized regions of Kherson and Mykolaiv to proclaim the so-called “people’s republics” and annex these territories to Russia. The occupation administration prints ballots, posters and brochures, and uses the passport data of local residents, obtained during the issuance of so-called “humanitarian aid,” to fictitiously fill out voting forms.

At a UN Security Council meeting, Ukraine’s permanent representative, Serhii Kyslytsia, revealed that more than 500,000 Ukrainians, including 121,000 children, had been forcibly relocated to the Russian Federation. The Ukrainians are issued documents prohibiting them from leaving Russian regions for two years.

Minister for Reintegration of the Temporarily Occupied Territories Iryna Vereshchuk reports that no humanitarian corridor was opened on April 19 due to heavy shelling in the Donetsk region. The Russian military in Mariupol refuses to provide a corridor for civilians to leave in the direction of Berdiansk. Difficult negotiations continue regarding the opening of humanitarian corridors in the Kherson and Kharkiv regions.

The Office of the UN High Commissioner for Human Rights recorded 4,966 civilian casualties in Ukraine by the end of the day on April 18. 2,104 people were killed and 2,862 injured as a result of the Russian invasion. Juvenile prosecutors report that as of April 19, 572 children were injured in Ukraine. The number of fatalities (205) was unchanged from the previous day; the number of injured children increased to 367.

The number of people displaced since February 24 due to the ongoing hostilities in Ukraine has exceeded the 12 million mark: more than 4.9 million people have crossed Ukraine’s international borders; at least 7.1 million people have changed their place of residence within the state.

Minister for Reintegration of the Temporarily Occupied Territories Iryna Vereshchuk reported on the fifth exchange of prisoners of war. As a result, 60 Ukrainian military (including 10 officers) and 16 civilians were released from captivity.

The Verkhovna Rada Commissioner for Human Rights, Liudmyla Denisova, stated that in the temporarily seized Izium in Kharkiv region, Russian troops are forcibly “mobilizing” local residents to participate in the war against Ukraine. This is a violation of Article 51 of the Geneva Convention relative to the Protection of Civilian Persons in Time of War, which strictly prohibits an occupying state from “forcing persons who are under the authority of a party to the conflict or an occupying state of which they are not citizens to serve in its armed or auxiliary forces”.

The head of the Kyiv region police Andrii Niebytov reported that more than 1,000 civilians were killed in the Kyiv region as a result of Russian aggression. More than 420 bodies of the dead have already been found in the city of Bucha alone.

Investigators of the State Bureau of Investigation have documented the crimes of the Russian occupiers in the town of Irpin in the Kyiv region (use of munitions banned by the Geneva Convention, unjustified cruelty, mass extermination of the population). The State Bureau of Investigation workers discovered 13 graves of civilians in the town of Irpin. The investigation also uncovered a large number of Russian weapons and ammunition, military equipment, documents, and other signs of belonging. In addition, the mine threat remains relevant. On April 19, a KAMAZ truck exploded in Irpin on a mine, the driver was killed.

The head of the Investment Council of Irpin and ex-mayor of the town Volodymyr Karpliuk said that about 1 billion dollars will be needed to restore the destroyed or damaged housing stock and infrastructure of the city.

Head of the World Health Organization (WHO) Tedros Adhanom Ghebreyesus reported that since February 24, the WHO has recorded 147 attacks on medical facilities in Ukraine, during which 73 people died and 53 were wounded.

According to the United Nations Children’s Fund (UNICEF) in Ukraine, 4.6 million people have limited access to water as a result of intense fighting in Ukrainian territory, which has led to the destruction of water and electricity networks. A total of 6 million people struggle daily for access to drinking water.

UN Secretary-General António Guterres called for a four-day “humanitarian pause” in the fighting in Ukraine over Easter to ensure the safe evacuation of civilians and the delivery of humanitarian aid to affected areas.

The International Monetary Fund forecasts the fall of the Ukrainian economy by 35% in 2022 as a result of the Russian-Ukrainian conflict.

According to the Deposit Guarantee Fund, starting April 19 PrivatBank began paying the first compensations to depositors without their personal presence at the bank’s institution (online).

The EU intends to compensate a significant part of the costs of Ukraine’s post-war reconstruction. To this end, a Solidarity Trust Fund will be created to finance investments and reforms in consultation with the Ukrainian government. As a first step in this project, the European Commission, together with the World Bank, will conduct a thorough assessment of Ukraine’s financial needs.

Ukrainian President Volodymyr Zelenskyi has submitted to the Verkhovna Rada a bill “On the extension of martial law in Ukraine” for another month — until May 25.

President of Ukraine Volodymyr Zelenskyi had a telephone conversation with Prime Minister of the Netherlands Mark Rutte. As a result of the conversation, the Dutch prime minister said that he had decided to send Ukraine heavy weapons, including armoured vehicles.

US Defence Department spokesman John Kirby reported that over the past two weeks Ukraine had received fighter jets and aircraft parts from other countries.

The Japanese Defense Ministry plans to transfer nuclear, biological and chemical defense suits (NBC) as well as drones to Ukraine as part of its assistance in countering Russian armed aggression. In addition, the state is increasing economic aid to Ukraine. Japanese Prime Minister Kishida Fumio said that their country plans to lend Ukraine 300 million dollars, which is three times more than the previous proposal.

According to German Chancellor Olaf Scholz, Germany is ready to finance arms supplies to Ukraine, which include anti-tank weapons, air defense equipment, ammunition and more. The Ukrainian side has already submitted its requests for relevant proposals.

Prime Minister of Poland Mateusz Morawiecki arrived in Lviv in connection with the opening of the first modular houses for internally displaced persons, which are being built with Polish support.

French Finance Minister Bruno Le Maire said France is in favor of the EU oil embargo against Russia and will persuade other countries to support the move.

Canada announced new sanctions against 14 individuals from Russia, including businessmen and members of their families. In particular, Putin’s daughters Maria Vorontsova and Yekaterina Tikhonova, and the head of the Russian Central Bank Elvira Nabiullina were put on the sanctions list. Canada would freeze the property of sanctioned Russians, as well as impose a ban on any agreements with them. In addition, the sanctioned persons will be banned from entering the country.

The Greek Coast Guard blocked the Russian Pegas oil tanker while en route to its destination after it was detained near coast of the island of Euboea. The order to arrest the ship was issued in accordance with instructions on sanctions imposed by the European Union against Russia.