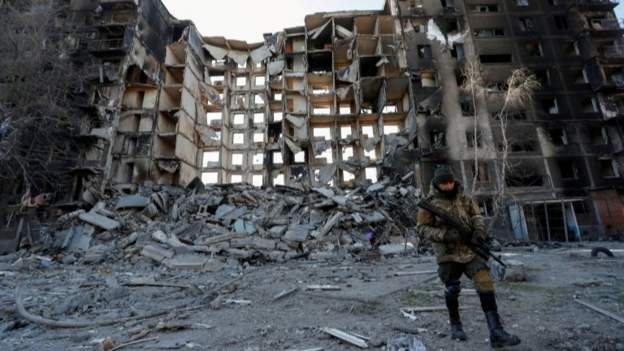 Russian forces are attempting an offensive in the east to establish full control over the territories of Donetsk and Luhansk regions. Air strikes against military and civilian targets continue, including the use of long-range aircraft.

Russian troops continue their partial blockade of Kharkiv. At least two multi-story buildings in the Saltivka district of the city burst into flames as a result of the shelling.

In Luhansk region, the Russian Army continues offensives to advance deeper into Popasna; tries to gain a foothold in the western and northwestern parts of Rubizhne; and carries out assault actions in the direction of Novotoshkivske village.

The head of the Luhansk Regional Military Administration, Serhii Haidai, reported that on the night of April 19-20, the Russian military shelled residential quarters in the towns of Hirske and Novodruzhesk (the town is located close to Lysychansk). According to him, 80 percent of Luhansk region territory is now under Russian military control.

Air strikes on the city of Mariupol are ongoing. The General Staff of the Armed Forces of Ukraine reports that Russian troops continue to storm Ukrainian positions near the seaport and Azovstal plant. Troops of the 36th Separate Marine Brigade, together with fighters of the Azov Regiment, managed to take a contingent of Border Guards fighters and the National Police, who were holding the defense at the seaport, to the territory of Azovstal.

In northern Donbass, the Russian military is conducting reconnaissance and preparing to continue an offensive in the direction of the town of Lyman. According to Pavlo Kyrylenko, head of the Donetsk Regional Military Administration, at least 5 civilians (3 in Marinka and 2 in Vuhledar) were wounded as a result of shelling in the region during the day. It was also possible to clarify information about 2 dead in Pavlivka and another 3 wounded (in Kramatorsk, Mariupol and Lyman), who were victims of the conflict earlier.

Russian troops are attempting to advance and push deep into Zaporizhzhia region. In particular, Ivan Arefiev, the speaker of the Zaporizhzhia Regional Military Administration, reported that the Russian military continue shelling the positions of the Armed Forces of Ukraine and conduct offensive actions in the Pokrovske — Huliaipole direction.

The head of the military administration of Kryvyi Rih, Oleksandr Vilkul, stated that on the evening of April 20, Russian troops shelled the town of Zelenodolsk and the village of Velyka Kostromka in the Dnipropetrovsk region.

Russian forces are launching air and artillery strikes against Ukrainian Armed Forces positions on the border of Mykolaiv and Kherson regions. Fighting continues near the village of Oleksandrivka.

Mykolaiv Mayor Oleksandr Sienkevych reported explosions in the city on the night of April 20-21.

The head of the Kherson Regional Military Administration, Hennadii Lahuta, specified that by early May, the Russians are preparing a pseudo-referendum in the occupied territories of the region (following the scenario implemented in Donetsk and Luhansk in 2014). According to him, the occupation administration does not yet have a candidate to head Kherson region. Later, Operational Command “South” reported that the Russians decided to reschedule the date of the so-called referendum from early May to April 27 in an attempt to speed up the legitimization of the occupation authorities.

The General Staff of the Armed Forces of Ukraine informed that in Kherson region, the Russian Federation plans to organize forced mobilization of the local population for the war with Ukraine.

Minister for Reintegration of the Temporarily Occupied Territories Iryna Vereshchuk said that during April 20, the main efforts to evacuate the population from the war zone were concentrated on the opening of a humanitarian corridor from Mariupol. However, despite all the efforts on the part of Ukraine, it did not operate properly. Only part of the previously announced evacuation buses with Mariupol residents managed to leave in the direction of Zaporizhzhia.

As of April 19, the Office of the UN High Commissioner for Human Rights recorded 5,121 civilian casualties in Ukraine as a result of the Russian Federation’s aggression (2,224 people killed, 2,897 wounded).

Juvenile prosecutors report that more than 578 children have been injured in Ukraine. As of the morning of April 20, at least 205 children had been killed and 373 wounded.

International Monetary Fund forecasts Ukraine’s public debt to grow to 86.2% of GDP in 2022 because of a full-scale invasion by Russia.

The Ministry for Communities and Territories Development of Ukraine informs that the Cabinet of Ministers adopted resolutions necessary for the organization of work to restore or dismantle buildings and structures damaged as a result of the armed aggression of the Russian Federation.

The Ministry of Energy reports that in the framework of the meeting of the Energy Community’s High-Level Permanent Group in Vienna, Ukraine proposed a comprehensive plan to deprive the EU of dependence on Russian energy resources.

The press service of the Ministry of Economy said that Ukraine and Canada were holding talks on extending the free trade agreement to the services and investment sectors after the end of the Russian-Ukrainian conflict.

President of the European Council Charles Michel has visited Kyiv. He attended Borodianka (Kyiv region), which has been liberated from Russian troops. In addition, he had a meeting with Ukrainian President Volodymyr Zelenskyi, during which the politicians discussed the prospects for Ukraine’s integration into the European Union, as well as sanctions against Russia and EU defense and financial support for Ukraine.

Minister of Foreign Affairs of Ukraine Dmytro Kuleba arrived on an official visit to Bulgaria, where he met with President of the state Rumen Radev and Chairman of the Bulgarian National Assembly Nikola Minchev. The meetings discussed ways to restore peace and development in the Black Sea region, as well as the need to increase the supply of agricultural products to maintain global food security.

An international expert group led by the Head of the Office of the President of Ukraine Andrii Yermak and former National Security Advisor to the U.S. President, Ambassador Michael McFaul presented an action plan to strengthen sanctions against Russia.

The G7 finance ministers announced additional support of over $24 billion for Ukraine. In addition, they declared their readiness to increase it if necessary.

The US Treasury Department announced new sanctions against Russia. The restrictions were imposed on the commercial bank Transcapitalbank (TCB); an international network of over 40 individuals and legal entities controlled by Russian oligarch Konstantin Malofeyev, which was used to circumvent sanctions and exert harmful influence; and companies operating in the field of virtual currency “mining” in Russia.

Japan passed bills to tighten sanctions against Russia. In particular, amendments were made to the customs legislation, which allows Japan to deprive Russia of the status of a “most favored nation in trade” and increase tariffs on Russian imports. Changes to the law on currency regulation are intended to prevent the use of crypto-assets by sanctioned persons as a loophole to transfer their funds to third parties.

Montenegro banned Russian propaganda media outlets Russia Today and Sputnik as part of sanctions imposed against Russia in response to the invasion of Ukraine.

German Foreign Minister Annalena Baerbock announced that Germany would completely abandon Russian energy imports. By the end of the summer, imports of Russian coal will be stopped; by the end of the year, Germany will abandon oil imports. Baerbock stressed that security in Europe means, among other things, breaking dependence on Russia, especially in energy policy. In addition, the minister believes that the war unleashed by Russia against Ukraine requires the creation of a new security architecture.

The head of the Senate of the Czech Parliament Miloš Vystrčil and Marshal of the Senate of Poland Tomasz Grodzki appealed to the parliaments of all civilized countries of the world to urgently provide Ukraine with weapons.