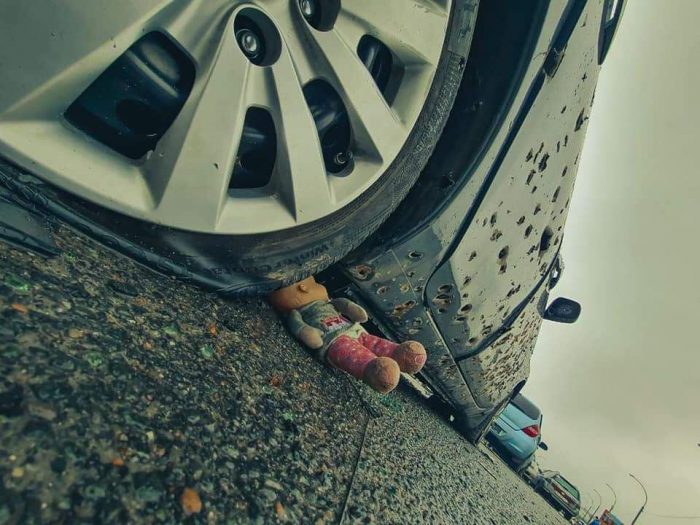 According to preliminary official information to the head of the Donetsk regional military administration Pavel Kyrylenko about 20,000-22,000 civilians have been killed since the Russian invasion of Mariupol. The exact number of victims currently impossible to count and it will be very difficult to determine ones after the liberation of the city, because the information is confirmed that the bodies of killed civilians were burned in mobile crematoria by the Russian military in order to hide the Russian war crimes from the world.

According to preliminary official data from the National Police of the Kyiv Region, after the liberation of the region from the Russian occupiers it has become known about 720 killed civilians and approximately 200 missing.

Bucha (Kyiv region) – 403 bodies of Bucha residents were found dead, many of them brutally tortured. The bodies were buried in mass graves during the occupation of the city by Russian troops. The exhumation of the bodies is currently lasting.

As of 8:00 a.m. on April 13, 2022, during the last 24 hours, 546 civilians had been killed due to the Russian invasion, among them 4 children, including the number of 403 killed people whom were found in mass graves in Bucha(excluding all victims in Mariupol, Volnovakha, Luhansk, Kherson, Kyiv Sumy, Kharkiv and Chernihiv regions). 26 people were injured, including 2 children.

As of April 12, due to the Russian full-scale invasion against the population of Ukraine, 186 children were killed and 344 were wounded, according to the data of the Office of the General Prosecutor of Ukraine.

Kyiv region: 505 civilians were killed, including at least two children.

Bucha (Kyiv region) – 403 bodies of dead civilians were found in mass graves, many of them have the signs of tortures. All of them were killed by the Russian military during the occupation.

Peremoha (Kyiv region) – after the liberation of the village it has become known that in early March, the Russian military occupyed the village and shot dead with machine guns and artillery column of 5 civilian cars. Due to the accident, 4 people died.

Makariv (Kyiv region) – after the liberation of the occupied village, a civilian car was found nearby on the road, which was shot down by heavy artillery. 5 people died – a child (2 years old), a teenager (14 years old), an elderly woman and 2 women. Most likely, they were trying to escape from the Russian-occupied village.

Motyzhyn (Kyiv region) – it has become known about a war crime of the Russian military against two Ukrainian volunteers who were trying to deliver humanitarian aid to the inhabitants of the Russian-occupied village. The Russian military captured the volunteers and were keeping them in a sewer hatch. From time to time they were taken out and tortured, forced to dig graves for killed civilians, and then were shot. However, one of the volunteers survived. He told this story.

Termakhivka (Kyiv region) – after the liberation of the village it has become known about the murder of at least 2 residents by the Russian military.

Luhansk region: 2 people died. This is incomplete information, according to the head of the Donetsk regional military administration Serhiy Haidai, all the morgues in the region are full of victims.

Novodruzhesk (Luhansk region) – 1 civilian was killed, the Russian army carried out air and missile bombardments on the residential neighborhood of the Luhansk region.

Kharkiv region: 12 people died due to the shelling, including 2 children. Wounded – 2.

Kharkiv – a child (2 years old) died due to a missile attack on residential neighborhoods by the Russian military.

Babai (Kharkiv region) – in the shelling of private houses by the Russian military, 1 person was killed and 2 were injured.

Kharkiv region – according to the regional National Police in the region during the past 24 hours 10 civilians were killed, including 1 child.

Kherson region: 7 civilians were killed. 2 people were injured, including 1 child.

Nadezhdivka (Kherson region) – 2 people were injured in the shelling, including a 14-year-old girl.

Chernihiv region: 8 civilians were killed and at least 10 were injured.

Novy Belous (Chernihiv region) – the bodies of 3 people were found during demining. People were fired in their own cars. Most likely, people died due to the shelling by cluster missiles, the wreckage of which was found near the burned cars.

Krupichpole (Chernihiv region) is a village through which columns of Russian military vehicles were coming from Belarus to Ukraine. Locals also noticed Chechens and Belarusians among them (eyewitnesses in Borodyanka also told about the presence of Belarusians). The Russian military openly fired on houses, schools and civilians. Five people were killed and at least 10 were injured.