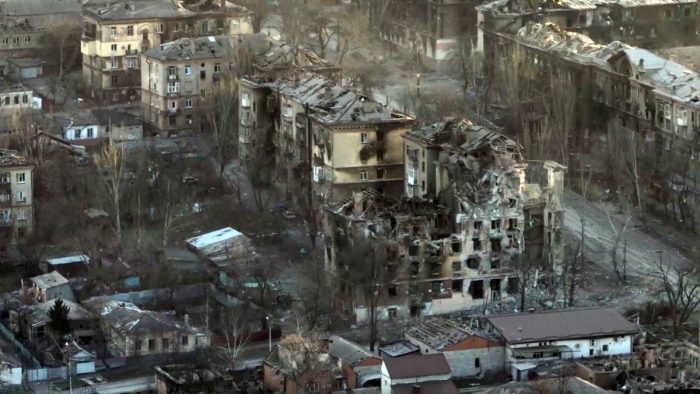 According to preliminary official information of the mayor of Mariupol, more than 10,000 residents of Mariupol have been killed since the beginning of the Russian invasion. The actual number can be much larger. Currently, about 120,000 people are remaining in the city. Also, according to the mayor, the Russian military are bringing the bodies of the dead civilians in a large shopping center and burning them in mobile crematoria, which are in large trucks. The Russian military is burning the corpses of civilians in crematoria to hide their own war crimes, so such information about its will not become known all around the world as it had happened with the crimes in Bucha.

Russia has used chemical weapons against the Ukrainian military defending Mariupol. Three soldiers have had signs of chemical poisoning. This is the first obvious case of the Russians using chemical weapons in Ukraine. However, there is a great danger that chemical weapons will become one of the main ones in Russia’s fighting for Donbas, which can start from day to day.

According to the President of Ukraine Volodymyr Zelensky, the Ukrainian army could unblock Mariupol if it had enough aircrafts and heavy armored vehicles, but the process of supplying weapons from the Western partners is very slow and accompanied by long-term negotiations.

As of 8:00 a.m. on April 12, 2022, during the last 24 hours, 46 civilians had been killed due to the Russian invasion, among them 3 children, (excluding all victims in Mariupol, Volnovakha, Luhansk, Zaporizhzhia, Kherson, Sumy, Kharkiv and Chernihiv regions). 49 people were injured, including 5 children.

As of April 11, due to the Russian full-scale invasion against the population of Ukraine, 183 children were killed and 342 were wounded, according to the data of the Office of the Prosecutor General of Ukraine.

Kyiv region – The New York Times has published a map of the killings of civilians by the Russian troops in Bucha.

Buzova (Kyiv region) – Russian military killed a child and threw the body into a well.

Borodyanka (Kyiv region) – 19 dead civilians were found under the rubble of the residential houses.

Andriyivka (Kyiv region) – it has become known about killing of 1 civilian.

Bucha (Kyiv region) – it has become known that the Russian military shot dead a civilian car in which the family was driving, trying to leave the occupied city. A mother and 2 children (5 and 10 years old) died.

Luhansk region: 2 people were killed and 7 were injured.

Lysychansk (Luhansk region) – 2 civilians were killed and 3 were injured.

Luhansk region – 2 people were injured, they were registered in Bakhmut hospital (Donetsk region)

Mykolaiv region: 25 civilians were wounded in the shelling.