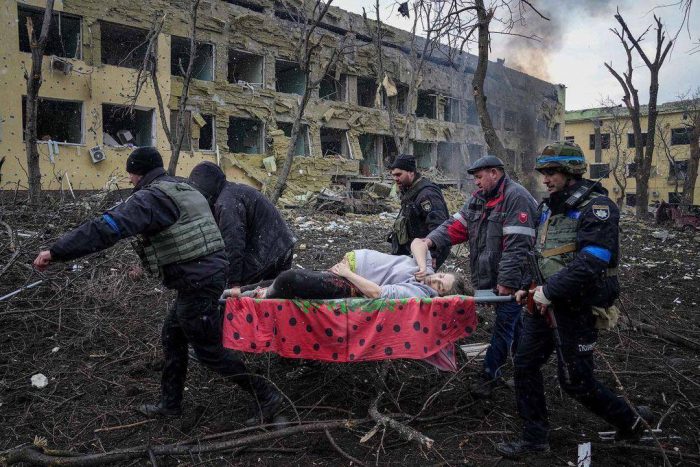 According to incomplete information as of 8:00 am on March 10, 2022, 106 civilians were killed in the last 24 hours as a result of air and artillery shelling by the Russian army in various cities of Ukraine, including 8 children and 44 wounded, including 4 children.

In total, according to preliminary official estimates of the Ukrainian authorities, as of March 10, more than 60 children have been killed and about 100 injured since the start of the Russian invasion.

Chernihiv – 47 residents of Chernihiv were killed in an air strike by Russian military aircraft.  According to Amnesty International, airstrikes have all the hallmarks of a war crime because of the use of unguided bombs prohibited by international law. The tragedy happened on March 8, but the bodies of the victims could be retrieved only on March 9.  According to Amnesty International, there is no military facility near the airfield. Instead, carpet bombardment was inflicted on people standing in line for food.

Chernihiv region – 4 civilians were shot and 4 wounded by Russian troops from tanks, while locals were trying to leave Chernihiv and walk between villages. Among the dead were 1 child and a 19-year-old boy.

In total, about 1,200 civilians have died in Mariupol since the Russian invasion began. The humanitarian situation is critical.  Since March 1, Mariupol residents have been in bomb shelters and basements without food, water, heat, electricity, medicine and communications.  On March 9, local authorities buried 47 victims in a mass grave.

Myronivka (Donetsk region) – 1 person was killed and 1 was injured.

Three civilians who were trying to leave Kyiv by car were shot dead from a Russian tank near Kyiv. Among the dead is Valeria Maksetska, an employee of the USAID partner organization.

Demidov (Kyiv region) – during the evacuation of local residents, 1 police officer who helped to evacuate people was killed and 2 people were injured (1 law enforcement officer and 1 local resident).

Sumy – an air strike on the evening of March 9 killed 22 civilians, including 3 children. 8 people were injured, including 1 child (a 5-year-old girl).

Trostyanets (Sumy region) – 3 locals were killed in artillery shelling, including a minor.

Okhtyrka (Sumy region) – the number of victims of shelling is being established.

Donets (Kharkiv region) – 2 people died, including 1 child (7 years old) as a result of aerial bombardment by unguided bombs (not high-precision, with a wide area of ​​damage).

Kharkiv – 1 person died (a 16-year-old boy) during the shelling of the city market, 2 children were injured.

Slobozhanske village (Kharkiv region) – 4 people died as a result of the shelling of a private house, including 2 children.  1 child injured.

Zhytomyr – 1 person was injured in the shelling of the boiler house and Berdychiv bridge in the city.

Severodonetsk (Luhansk region) – according to preliminary information, 10 civilians were killed in the shelling.