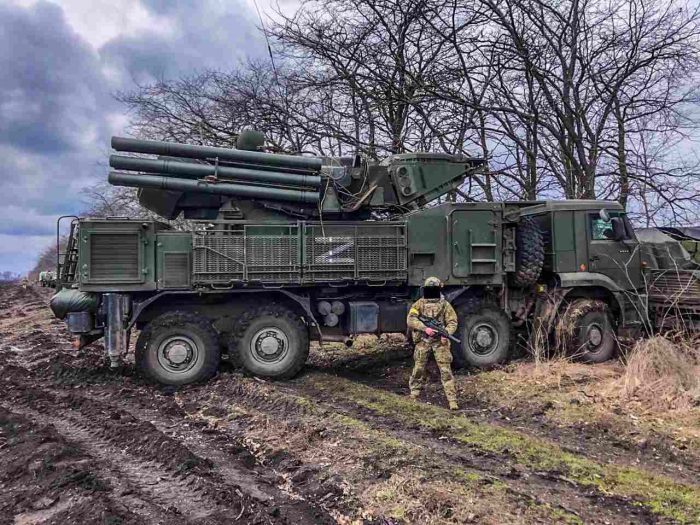 Total combat losses of Russian troops from 24.02 to 10.03 were estimated at over 12,000 men, over 335 tanks, 1,631 pieces of armored and automotive equipment and 130 aircraft (planes and helicopters). The Armed Forces of Ukraine halted the Russian offensive in all directions. The Russian Armed Forces, in order to mislead the Armed Forces of Ukraine units, began marking themselves with yellow tape on their sleeves, which is used by the Ukrainian army to identify “friend-or-foe”.

During combat operations in the Brovarsky district of the Kyiv region to the east of the capital, the Russian Armed Forces suffered significant losses in personnel and equipment. In particular, the Ukrainian Armed Forces eliminated tank regiment commander A. Zakharov. As a result of the battle, the Russian troops were forced to retreat and take the defensive position.

Near the village of Mokrets (Kyiv region) the Ukrainian Armed Forces engaged in combat with completely defeated Russian Armed Forces units. Russian troop losses include: 3 tanks, a Tor SAM system, and 2 MTLBs. Ukrainian troops took trophies to be used for the defense of the country: 7 T-72 tanks, 1 BRM.

Russian troops shelled a Coca-Cola plant located in Velyka Dymerka near Kyiv. No one was injured as a result of the shelling as the company suspended operations and evacuated workers on the first day of the war.

Russian forces shelled Nizhyn from Uragan multiple rocket launchers. Eight wounded and two dead were reported. As a result of the explosion 40 meters of heating mains were damaged. Repair work was under way.

In the Chernihiv region, one of the units of the Operational Command North had a battle with the overwhelming Russian forces. As a result of this battle, the Ukrainian Armed Forces seized 10 work tanks, an anti-aircraft missile system and an armored recovery vehicle.

The Russian Armed Forces have carried out another airstrikes at the Kharkiv Research Institute, which is a nuclear facility. About 20-30 bombs were dropped on the Kharkiv Institute of Physics and Technology located in Pyatikhatki. This Ukrainian scientific center is under IAEA safeguards, because radiation sources used for scientific purposes are located there.

On the night of March 10, the Russian military shelled residential neighborhoods in Kharkiv. In the city center, the Nikolsky shopping mall was destroyed, while in the village of Slobozhanske, a shell hit a private house.

As a result of the air raid in Chuhuiv, the building of the Security Service of Ukraine was destroyed, and neighboring buildings – residential houses, a school and a store – were damaged as well.

Soldiers of the Armed Forces of the Russian Federation carried out an air strike on the village of Selektsiyne, located in the Kharkiv region. As a result, a 73-year-old woman was killed. According to preliminary data, the shelling was carried out with cluster bombs.

Russian military and “LNR” armed groups were trying to get into the territory of compressor stations Novopskov, Luhansk region, and Kupyansk (Kharkiv region), as well as to interfere with the operation of GTS facilities. The seizure and further interference in the technological processes of the GTS operation creates significant risks for the safety of continuous gas transportation to consumers in Ukraine and Europe and can lead to a technological disaster in the region.

On March 10, around 12:50 p.m., Russian aggressors shelled the central part of the town of Balakliya in Kharkiv region.

Rubizhne in Luhansk region was again under fire. As a result, windows were broken in the building of the executive committee, hospital, city palace of culture, and many residential buildings were damaged.

Around 11:30, Russian troops fired artillery at residential areas of Mariupol, where rescuers were working. Simultaneously with the shelling, the Russian Air Force launched an air raid. The bombs hit residential buildings as well as the building of the Pryazovskyi State Technical University. There was also a bombardment in the area of the Drama Theater, and a crater more than 10 meters deep was formed near it. The Main Directorate of the State Emergency Service of Ukraine in Donetsk region was completely destroyed.

Russian troops who seized the Zaporizhzhia NPP in Enerhodar mined the coast of the Kakhovka Reservoir, which borders the nuclear power plant.

In Kherson Oblast, Russian aggressors attempt to impose an administrative and police regime and establish a system of commandant’s offices in temporarily occupied populated areas.

In Poltava region, a local territorial defense unit used a quadcopter to detect a tank and a Uragan multiple rocket launcher of Russian forces, after which the Russian Armed Forces military equipment was destroyed by precise fire.

In Dnipro, three airstrikes occurred around 6:10 on the morning of March 11, in the Novokodatskyi District of the city. The shell hit near a kindergarten, an apartment building and a two-story shoe factory.

Residents of Melitopol and Berdyansk come out daily to protest the Russian Federation’s attack on Ukraine and the temporary occupation of their towns, chanting “Glory to Ukraine!”, “Go away,” etc.

Arrests and searches have begun in the homes of Crimean Tatar activists in the southern territories of Ukraine bordering Crimea that have been seized by the Russian army.

Russia launched an information campaign on foreign resources and media about the alleged persecution of Jews in the Zhytomyr region. The purpose of this information campaign was to incite interethnic discord. The Russian fakes were refuted by Zhytomyr’s chief rabbi, Shlomo Wilhelm.

For more than a week, Russia has been conducting an information campaign to justify the war with Ukraine in the eyes of Russian citizens. Russia was gradually abandoning the “denazification and demilitarization” narrative and replacing it with a fictional new one: the development of U.S. biological and chemical weapons in Ukraine. The latter narrative could then be used by the Russian side to cover up the actual use of biological or chemical weapons against the Russian population, which would be blamed on Ukraine.

The Russian Defense Ministry has started to disseminate new fakes about the alleged development of biological weapons in Ukraine with the aim of spreading them to Russia through bats and migratory birds. According to Russian media, they allegedly caught infected birds released from the Kherson Reserve (such a reserve has never existed in Ukraine) in Ivanovo and Voronezh regions. The Russian media actively began to spread information that Belarusian specialists had taken the situation with the ChNPP currently without electricity under their control and began supplying electricity from Mozyr. The state enterprise “Energoatom” almost immediately refuted this information and called it a fake. The Chernobyl nuclear power plant continued to be without electricity, and the operation of critical facilities was ensured by backup diesel generators.

Mariupol is still blocked. Humanitarian aid cannot be sent to the city. More than 300,000 people since March 1, 2022 suffer from a lack of water and heat supply, as well as food.

According to the military leadership of Ukraine, as of March 10, the Russian armed forces killed more Ukrainian civilians than were killed in the battle of our military from all structures of the defense sector. Instead, the UN said that as of March 8, there were 1,424 civilians in Ukraine among civilians, including 516 killed.

Ukrainian-Russian talks took place in Turkey as part of an organized diplomatic forum.  The parties were represented by the Foreign Ministers of Ukraine and the aggressor state through the Minister of Foreign Affairs of Turkey.  During the talks, Ukraine aimed to agree on humanitarian corridors, in particular, from Mariupol, and on at least a 24-hour truce to address all the humanitarian needs of the population.  Negotiations proved fruitless.

The emergency summit of the European Union on March 10-11 in Versailles adopted a statement recognizing the prospect of Ukraine’s membership in the EU, which will be further considered by the European Commission.

The IMF has transferred $1.4 billion in emergency support to Ukraine.  The United States is allocating an additional $53 million to support civilians affected by Russia’s aggression in Ukraine.

With each passing day of Russian aggression, more and more companies are refusing to continue economic cooperation with Russia.

– China has refused to supply aircraft parts to Russian airlines.

– Honda and Mazda have announced their withdrawal from the Russian market.

– One of the largest investment companies in the world Goldman Sachs Group Inc.  stated that it plans to close its operations in Russia.

– Turkish airline Pegasus Airlines has decided to cancel flights to Russia for a while.

– Burger King’s global fast food chain has shut down its restaurants in Russia.