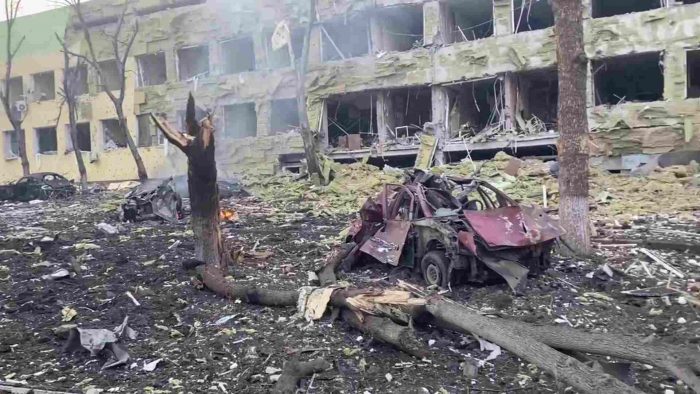 Total combat losses of Russian troops from 24.02 to 09.03 were estimated at over 12,000 men, more than 317 tanks, 1,552 pieces of armored and automotive equipment and 130 aircraft (planes and helicopters). The aggressor continued to focus its main efforts on encircling the city of Kyiv and capturing the cities of Sumy, Kharkiv, Mariupol and Mykolaiv. The Republic of Belarus supported the Russian Federation in supplying fuel and lubricants, using railway infrastructure and the airfield network.

As of 09.03, the Chornobyl nuclear power plant and the town of Slavutych were completely de-energized in the Chornobyl Exclusion Zone as a result of Russian forces’ actions. Due to the high intensity of the ongoing battle, all nuclear facilities were without power and it was impossible to begin repair work. This threatened the release of radioactive gases and steam, which could spread not only across Ukraine, but also Belarus and the Russian Federation. The actions of Russian troops fall as crimes under Article 2 of the International Convention for the Suppression of Acts of Nuclear Terrorism and Article 7 of the Convention on the Physical Protection of Nuclear Material, to which the Russian Federation is a party. Such actions should entail severe sanctions from the international community.

Fighting continued in the Chernihiv region. Russian forces slowed their advance, but were still trying to resume the offensive operation. At the same time, the Armed Forces of Ukraine inflicted significant losses on the Russian military in personnel and equipment; there were cases of desertion among the opponent.

Russian troops shelled the outskirts of Sumy and Okhtyrka on the night of March 10; damaging residential areas and transport infrastructure in the towns. In Trostyanets, the former Elektrobutprylad plant was shelled. In Mala Pavlivka village, Russian troops’ aviation struck Ukrnafta PLC, resulting in the ignition of an oil tank.

The Armed Forces of Ukraine destroyed the Russian forces’ base near the village of Dergachi, from which they shelled a residential area of Kharkiv. Russian troops were forced to retreat from their positions behind the border with the Russian Federation to replenish reserves and recuperate.

A sabotage and reconnaissance group of Russian troops attacked a State Border Guard Service of Ukraine checkpoint near the village of Andriyivka in Kharkiv Region. After suffering a defeat, the Russian saboteurs retreated.

On March 8 and 9, there was massive shelling in Severodonetsk, Lysychansk, Rubizhne, Popasna, Kreminna, and Metyolkin. During the day, 63 houses were damaged or completely destroyed in the Luhansk region. At least 10 civilians were killed.

Mariupol was under heavy shelling by the Russian military, which aimed to completely destroy civilian infrastructure and inflict maximum losses on the civilian population. As a result of the shelling, Maternity Hospital No. 2 was destroyed. Seventeen people were injured, there was no information about the people killed. The shelling was followed by an airstrike by the Russian Air Force, which deliberately targeted the children’s hospital. As a result of the air strike, the building of the medical facility was completely destroyed.

Russian troops seized the detention center in temporarily occupied Kherson. The Russian Armed Forces were trying to impose a police regime in the city and nearby populated areas.

The Ukrainian Armed Forces reconnaissance in the Kherson region detected Russian servicemen who had changed into civilian clothes and were advancing in the direction of Mykolaiv.

Once again, protests against the temporary Russian occupation continued in the Kherson region. Residents of Skadovsk unfurled a giant Ukrainian flag at a pro-Ukrainian rally. In addition, residents of Kherson continued to resist, with the Russian military attempting to impose an administrative and police regime. In particular, Rosgvardiya units were deployed to the Kherson region, which performed unlawful detention of more than 400 Ukrainian citizens.

In Zaporizhzhia region, residents of Melitopol, Enerhodar and Berdyansk continued pro-Ukrainian peaceful actions in the thousands. It is worth noting that the residents of Melitopol ignored the threats of opening fire from the Russian military due to violations of the restriction of their movement only within the perimeter of the permitted area.

In Chernihiv region, residents of the town of Horodnia also organized a multi-people peaceful action against Russian troops.

In order to try to rehabilitate the Russian invasion and raise the “patriotic” spirit of soldiers and ordinary Russians, the Russian party “United Russia” launched a propaganda campaign called “To the Defenders of the Fatherland” in Russia on March 9. The essence of the campaign was that in all regions of Russia schoolchildren/students/budgetary workers/pensioners would be obliged to write letters/draw pictures to the soldiers fighting in Ukraine.

In the morning of 09.03., local authorities in Kharkiv, together with the military, resumed stable signal broadcasting on the local TV tower.

In Berdyansk, Russian troops continued to conduct an information campaign via radio: local residents were informed about the possibility of obtaining Russian passports, as well as writing off all debts for utilities.

By decision of the National Center for Operational and Technical Management of Telecommunications Networks, operators arranged for subscribers to access the Internet in bomb shelters.

In temporarily occupied Donetsk, letters were sent to various organizations and educational institutions demanding that they shoot a short video clip thanking the president of the Russian Federation using prepared templates and instructions. The purpose of these actions was another distortion of reality and the formation of a favorable image for the Russian media.

Russia continued to hold more than 400 thousand people hostage in Mariupol, blocking the provision of humanitarian aid and the evacuation of civilians. An airstrike on Mariupol Maternity Hospital No. 2 injured at least 17 people, including staff and a woman in labor. As of March 9, 1,300 civilian casualties have been reported in that city.

The humanitarian disaster was taking place in the Buchansky district of the Kyiv region. Twenty-five populated areas in that direction were being held hostage by the Russian Federation. Russian checkpoints had been deployed throughout the area, and homes and infrastructure were shelled. According to operational information, some 4,500 people needed to be evacuated and were in shelters and under rubble.

Two thirds of Chernihiv was left without heat and hot water, human losses in the city reached 60 dead and 400 wounded.

For refusing to surrender, the Russian armed forces laid siege to and continue to destroy the city of Izyum in the Kharkiv region.  There are reports of hundreds of civilian casualties.

The death toll from enemy airstrikes in Sumy increased to 22 on the evening of March 7 and at night on the 8th. In addition to the dead, 8 people were injured, including a five-year-old girl.

The European Bank for Reconstruction and Development has announced the allocation of a so-called “sustainability package” worth 2 billion euros in connection with the war in Ukraine.  Funds for Ukraine’s neighbors are provided to help with the arrival of refugees, to mitigate the effects of war and sanctions on their energy sector, and to maintain liquidity for small and medium-sized businesses. The US Congress has reached a bipartisan agreement on an emergency aid package of 13.6 billion euros to Ukraine. At the same time, the Board of Directors of the International Monetary Fund supported the decision to provide Ukraine with $ 1.4 billion in emergency financing. It is noted that the disbursement “will provide critical support in the short term and act as a catalyst for funding from other partners.”

British Defense Secretary Ben Wallace said Britain was exploring the possibility of handing over Thales anti-aircraft missiles to Ukraine to help protect its skies from Russian invaders. In response to Ukraine’s inquiries, the British government has decided to consider the free transfer of high-speed portable anti-aircraft missile systems STARStreak. The Prime Minister of Canada Justin Trudeau has announced the supply of a new batch of highly specialized weapons to Ukraine for $ 50 million.

The NATO Secretary General warned that Russia’s attack on the supply line of Allied countries supporting Ukraine with weapons and ammunition would be a dangerous escalation of the war. Stoltenberg stressed that if Russia attacks any NATO country or NATO territory, it will activate Article 5 of the North Atlantic Treaty.

The EU Council approved new sectoral sanctions against Russia and Belarus for armed aggression against Ukraine. Restrictions are being imposed on exports of goods related to maritime navigation and radio communications to Russia. It is forbidden to import euros in cash in Belarus. The United Kingdom has promulgated new aviation sanctions, which give it the right to detain any Russian aircraft and ban the export of aviation or space goods to Russia.

The Estonian Foreign Ministry has announced that it is considering suspending the issuance of visas to Russians.

Russia is isolated from the international market:

– The World Economic Forum (WEF) in Davos has frozen relations with Russia, including a strategic partnership with the oligarchs.

– Discovery suspends broadcasting of its channels and services in Russia.

– American lingerie brand Victoria’s Secret is shutting down in Russia and closing its physical and online stores.

– The British company Mothercare, which specializes in the sale of products for expectant mothers and children, is closing in Russia.

– Jewelry brand Pandora has stopped operating in Russia and Belarus.

– Nestle and Philip Morris (Parliament, Marlboro, Chesterfield, L&M, Next, as well as IQOS sticks) have announced the cessation of investment in Russia

– Finnish timber company UPM-Kymmene will suspend the purchase of timber in Russia.

– The American company Brown-Forman Corporation, one of the largest producers of alcoholic beverages, has announced the suspension of commercial operations in Russia.

– WarnerMedia has announced the cessation of television broadcasting in Russia, the suspension of licensing agreements for new content and planned premieres of movies and video games.

– Swiss chocolate company Lindt is shutting down business in Russia.

– Apple Pay and Google Pay are no longer available in Russia.

– Sony Interactive Entertainment has announced the closure of the PlayStation Store and deliveries to Russia.

– The IELTS English language test has been canceled in Russia.

– The Italian group Eni has suspended new contracts for the purchase of oil and oil products from Russia.

– The Danish company Vestas, which produces equipment for renewable energy, has decided to stop 4 projects in Russia.