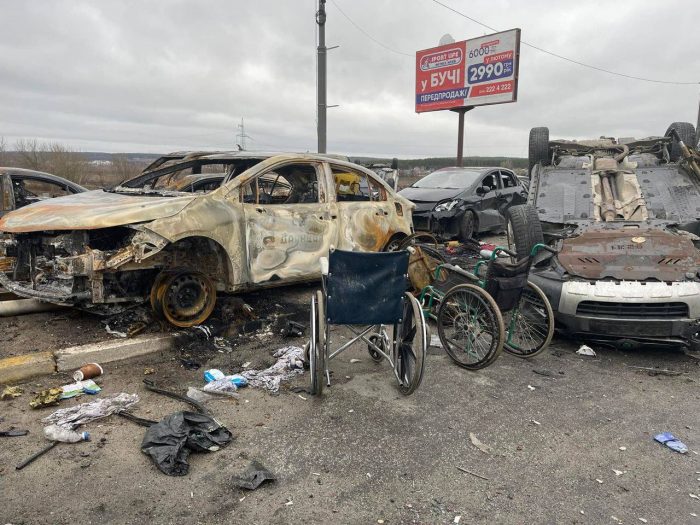 According to the official information of the Office of the General Prosecutor of Ukraine, 410 corpses of civilians were taken out of Kyiv region for identification.

As of 8:00 a.m. on April 4, 2022, during the last 24 hours, 28 civilians had been killed due to the Russian invasion (excluding all casualties in Mariupol, Volnovakha, Kyiv, Luhansk, Zaporizhzhia, Kherson, Poltava, Sumy, Kharkiv and Chernihiv regions). 57 people were injured, including 4 children. 6 civilians were captured, and totally more than 100 civilians were kidnapped by the Russian troops, they are mostly journalists, local government officials of the occupied settlements, the Ukrainian activists and teachers as well.

Four previously captured civilians were tortured and killed. One foreign journalist was killed.

Terror, torture, bullying and cruelty are the basic activities of the Russian military in the new temporarily occupied settlements of Ukraine to the local residents. Dozens of towns in Kharkiv, Luhansk, Kherson, Zaporizhzhia, Chernihiv and Donetsk regions have been captured by the Russian army.

The Russian invaders implement the same policy of terror everywhere:

– The residents are not allowed to leave the occupied settlements (evacuation buses have not been able to leave Melitopol – Zaporizhzhia region for several days);

– The Russian forces fire on civilian and evacuation cars, buses, even under the “CHILDREN” sign – they intimidate the local population;

– Instead, they conduct illegal deportation of Ukrainian citizens – they try to take people out without their consent or without proper information to certain areas of Donetsk and Luhansk regions (occupied in 2014) or Russia (often such cases are in Kharkiv, Luhansk and Donetsk regions);

– Turn off the Ukrainian mobile networks and connect to the Russian mobile operators;

– Humanitarian aid (medicines, food, the goods of first necessities) is not allowed to be delivered by the Ukrainian authorities, volunteers and international humanitarian organizations. They are deliberately creating a critical humanitarian situation in the settlement in order to promote the narrative “Ukraine has left you”;

– Intimidating of local authorities, trying to force them to cooperate with the Russian occupiers;

– They are trying to organize fake “referendums”, as well as to replace Ukrainian educational programs in schools with Russian ones;

– Violently disperse peaceful rallies, which are held by local residents protesting against the Russian occupation;

– During hostilities, civilians are used as human shields, there are facts of 24 hour keeping of local residents near the Russian military vehicles and weapons;

– Civilians, including children, are raped and tortured.

As of April 3, the Russian full-scale war against the Ukrainian population 158 children were killed and 258 were wounded, according to the Office of the Prosecutor General of Ukraine.

Six civilians were captured by the Russian troops in the occupied settlements:

2. Oleksandr Hunko, the chief editor of the local mass media “Nova Kakhovka City”, was taken prisoner in Nova Kakhovka. He covered a public opposition to the Russian occupation, peaceful rallies.

3. In the Zaporozhzhia region, the Russian military abducted Serhei Belichev – the former head of the Primorsky district. According to the preliminary information, he was brought to the prison in Berdiansk.

4 people were tortured and brutally killed:

Russian military brutally tortures and kills captured Ukrainian citizens. It is already known about the torture and murder of the Ukrainian athlete-runner, record holder of the “Book of Records of Ukraine” – Serhey Pronevich, who was tortured in the village of Boromlya, Sumy region during the Russian occupation of the village.

On April 3, it was officially established that three more people on the list abducted by the Russian military on March 23, were tortured and killed: family – Olha Sukhenko (head of the village of Motyzhyn), her husband, Ihor Sukhenko, and her son, Olexander Sukhenko. They were killed in Bucha (Kyiv region) during the “Bucha Massacre”.

The list of captured and missing people is growing every day. Most of the people kidnapped by the Russian occupiers are still unknown.

A Lithuanian Journalist Mantas Kvedaravičius was killed in airstrikes in Mariupol. He was a well-known documentary filmmaker and died with a camera in his hands.

Losses of civilians in different regions and cities of Ukraine:

Kyiv Region: According to the official information of the Office of the General Prosecutor of Ukraine, 410 corpses of civilians have been taken from Kyiv Region for identification.

Irpin (Kyiv region) – according to the preliminary information, the number of civilians killed due to the Russian occupation of the town is more than 200.

Bucha (Kyiv region) – one of the private houses was equipped with a place for torturing people.

Mariupol – 1 person died and 1 was wounded.

Rubizhne (Luhansk region) – 1 person died in the shelling of the hospital.

Mykolaiv region: 1 person was killed; 14 were injured, including 1 child.

Mykolaiv – the Russian army carried out a new missile strike on the city. As a result, 1 person was killed and 14 were injured, including 1 child.

Sumy region: 5 civilians were killed and 3 were injured.

Boromlya (Sumy region) – the Russian military brutally tortured and killed a well-known Ukrainian athlete, marathon runner, record holder of the “Book of the Records of Ukraine” – Serhey Pronevich. The Russian military kidnapped him on March 12. His death became known after the liberation of Boromlya from the Russian occupiers

Velykyi Sambir (Sumy region) – a civilian car exploded on a mine – 1 person was killed and 3 were injured.

Nizhyn district (Sumy region) – during the retreat from the region, the Russian military shot dead 3 civilians, every of whom died.

Kharkiv – 7 people were killed and 34 were injured in a rocket attack on a residential area of the city, including 3 children.

Derhachi (Kharkiv region) – at least 3 people were killed and 7 were injured in the shelling.

Balakliya (Kharkiv region) – the Russian occupiers fired evacuation buses transporting patients of the local hospital. According to the preliminary information, the bus driver died. One of the buses burned down completely. Totally 70 people had to be evacuated from the hospital – patients and medical staff. The day before, the hospital was shelled by the Russian occupiers.

Lozova (Kharkiv region) – 6 civilians were wounded in the shelling by the Russian troops. Residential houses destroyed, cut off electricity.

Bilozirka, Snihurivka, Shiroka Balka (Kherson region) – 4 civilians were wounded in the shelling. All of them are in hospital, 3 persons have already been operated on.