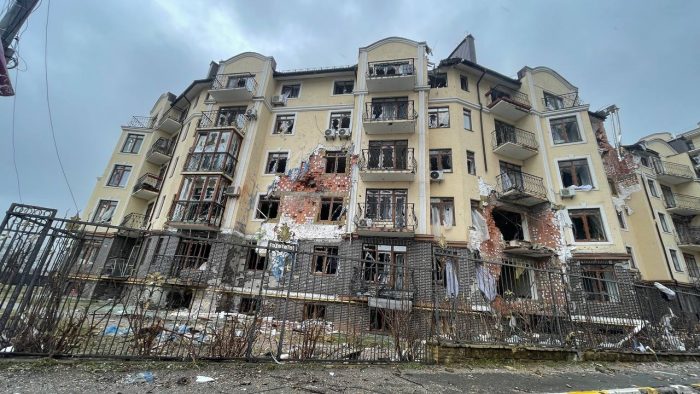 Russian forces continue to strike civilian infrastructure and fuel and lubricant storage bases. The main efforts are focused on preparing for the resumption of offensive operations and establishing control over the territories of Donetsk and Luhansk regions.

The General Staff of the Armed Forces of Ukraine reports the completion of the retreat of Russian troops from the territory of the Kyiv region. Ukrainian airborne units took control of a section of the Ukrainian-Belarusian border near Prypiat.

Air Command “Center” reported that a missile strike was launched against the city of Vasylkiv (Kyiv region). Some of the missiles were shot down by air defense systems. According to preliminary reports, several people were injured.

The withdrawal of Russian troops from Chernihiv and Sumy regions continues. The Ukrainian military liberated the population centers of Kolychivka, Yahidne, Ivanivka in the Chernihiv region, where the interchanges on the Kyiv-Chernihiv highway are located.

On the Kharkiv direction, the situation is extremely acute around Izium, where Russian troops continue to attack Ukrainian positions. A Russian aircraft was shot down near the town.

Shelling of Kharkiv also continues. On April 3, the head of the Kharkiv Regional Military Administration, Oleh Syniehubov, reported that over the past 24 hours, Russian troops launched 21 artillery, mortar, and tank attacks on the city and the surrounding area. On the evening of April 3, the Russian military shelled residential buildings in the Slobidskyi district of Kharkiv. According to preliminary information, seven people were killed and 34 injured (including three children) as a result of the shelling.

In addition, the head of the Kharkiv Regional Military Administration reported the shelling of a convoy that was on its way to evacuate people from the destroyed hospital in temporarily occupied Balakliia. According to preliminary reports, the driver of one of the buses was killed.

The head of the Luhansk Regional Military Administration, Serhii Haidai, informs that the Ukrainian armed forces hold positions in certain areas of the towns of Rubizhne and Popasna. The shelling of Sievierodonetsk, Rubizhne and Lysychansk continues. One person in Rubizhne was killed as a result of the hostilities; three people (residents of Lysychansk and Novodruzhesk) were wounded. Two Ukrainian volunteers engaged in distribution of humanitarian aid were killed during mortar shelling in Novodruzhesk.

Russian forces continue to try to establish full control of Mariupol. Fighting continues in other parts of the front. As a result of shelling in Avdiivka, Heorhiivka and Marinka, 5 people were wounded.

According to Ivan Arefiev, speaker of the Zaporizhzhia Regional Military Administration, the shelling of peaceful villages and towns in the Polohy district of Zaporizhzhia region is ongoing, the Russian army places weapons and military equipment in close proximity to the residential infrastructure of populated areas, and conducts filtering measures in the temporarily occupied territories.

According to reports from the General Staff of the Armed Forces of Ukraine, there is fighting for Oleksandrivka in the Mykolaiv region in the Southern Buh direction. Russian troops are seeking to gain full control of the territory of the Kherson region.

Rocket attacks have been carried out on Mykolaiv. Vitalii Kim, head of the Mykolaiv Regional Military Administration, informed that as a result of the shelling of the city about 11 people were injured, 1 person was killed. Also the town of Ochakiv was shelled, and there were dead and wounded.

According to Serhii Bratchuk, the speaker of the Odesa Regional Military Administration, on the night of April 3 to 4, Russian troops launched another missile attack on one of the facilities in Odesa.

On the evening of April 3, Ternopil Mayor Serhii Nadal reported a rocket attack on the city.

The State Service for Special Communications and Information Protection indicated that in a month of war there have already been three times more hacker attacks of various types than in the same period last year. The most popular types of attacks remain phishing mailings, distribution of malicious software, and DDoS attacks.

According to Iryna Vereshchuk, the Minister for Reintegration of the Temporarily Occupied Territories, almost 2.7 thousand people were evacuated through humanitarian corridors on April 3.

The Office of the UN High Commissioner for Human Rights reported that as of 00:00 April 3, there were 3,455 civilian casualties (1,417 dead and 2,038 wounded) since the start of the large-scale invasion of Ukraine by the Russian Federation. The Office of the Prosecutor General stated that as of the morning of April 3, 158 children were killed in Ukraine because of the actions of the Russian military; more than 258 were wounded.

Prosecutor General Iryna Venediktova reported that 410 bodies of dead civilians have been taken out for examination from areas of the Kyiv region liberated from Russian forces in recent days. Reuters published satellite images likely depicting a mass grave in Bucha (Kyiv region) located on the grounds of St. Andrew’s Church.

The international non-governmental human rights organization Human Rights Watch published a report on a number of war crimes (rape, murder, and other violent acts) committed by Russian troops against civilians in the temporarily controlled territories of Chernihiv, Kharkiv, and Kyiv regions.

Melinda Simmons, the head of the British Embassy in Ukraine, accused the Russian army of deliberate use of rape as a military weapon, as “a deliberate act of enslavement (of the population of the occupied territory)”.

The Ukrainian Parliament Commissioner for Human Rights, Liudmyla Denisova, referring to the local authorities of Mariupol, reported that almost 40 thousand residents of the city had been taken by Russian troops to the temporarily occupied territories of Donetsk region or the Russian Federation.

Minister for Reintegration of the Temporarily Occupied Territories Iryna Vereshchuk reported that as of April 3, several hundred civilians, including 11 heads of local communities from Kyiv, Kherson, Kharkiv, Zaporizhzhia, Mykolaiv and Donetsk regions were being held captive by Russian troops.

Izium Deputy Mayor Volodymyr Matsokin reported that Izium’s residential buildings in Kharkiv region were destroyed by almost 80%; there is no electricity, heat or water in the city. The number of casualties among Izium residents cannot yet be counted.

Vladyslav Atroshenko, Chernihiv Mayor, informed that Chernihiv was destroyed by 70%. There are problems with food supply in the city. Due to the lack of electricity, it is difficult for residents to store food and cook food.

Residents of Kherson continue public protests against the temporary occupation of the region by Russian troops. Residents of Kherson and Kakhovka came out to pro-Ukrainian rallies. In Kakhovka, Russian troops used weapons and flash-bang grenades against the protesters. According to preliminary reports, two people were injured; four more were detained by the Russian military.

The Ministry of Economy informs that in March 2022 the export of Ukrainian goods halved and imports decreased more than three times. The export of metals and agricultural products was hit especially hard.

First Deputy Head of Ukravtodor Andrii Ivko indicated that 23 thousand kilometers of roads and 273 artificial structures (bridges, overpasses, etc.) were destroyed as a result of the war in Ukraine. The total amount of damage is 874 billion hryvnia.

Minister of Foreign Affairs of Ukraine Dmytro Kuleba appealed to the International Criminal Court and other international organizations to come to Bucha and other populated areas of the Kyiv region to collect evidence of war crimes and crimes against humanity committed by the Russian armed forces. The Ukrainian Foreign Ministry has already sent a corresponding request to the International Criminal Court. Kuleba also stated that the Russian military deliberately killed civilians in Bucha and also noted the need for the immediate imposition of new sanctions (embargo on Russian oil, gas and coal; closure of all ports for Russian ships and goods; disconnection of all Russian banks from SWIFT) on the part of the G7.

Foreign politicians express their outrage at the crimes of the Russian military in Bucha. The head of the European Council, Charles Michel, stated he was shocked by the pictures from the scene. He said that the EU would help Ukraine gather evidence to bring Russia to justice in international courts. British Prime Minister Boris Johnson announced that his country would tighten sanctions against Moscow and increase military and humanitarian aid to Ukraine after the “despicable attacks on civilians” near Kyiv. British Foreign Secretary Liz Truss called the actions of the Russian military abhorrent and recalled that her country is working with other nations to gather evidence for the International Criminal Court.

French and German leaders’ statements about the events in Bucha stressed the need for further international investigation of the Russian military’s crimes against civilians and to bring them to justice. German Foreign Ministry Annalena Baerbock said that Germany will tighten sanctions against Russia. President of Moldova Maia Sandu declared April 4 a day of mourning for those killed in Ukraine.

Polish Prime Minister Mateusz Morawiecki reacted to the news about the crimes committed by the Russian armed forces in the Kyiv region by calling for an EU summit followed by a discussion of imposing new sanctions against Russia. At the same time, Morawiecki said that the crimes of the Russian army should be called acts of genocide. Later, Polish President Andrzej Duda, commenting on the events in Bucha, stated that there was a critical need to provide the Ukrainian Armed Forces with additional weapons.

Greek Foreign Minister Nikos Dendias arrived in Odesa with a cargo of humanitarian aid and also met with the city mayor Hennadiy Trukhanov.