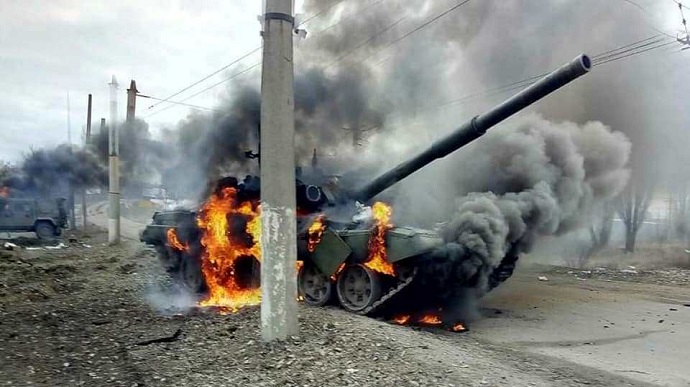 Russian forces are focused on regrouping, preparing for resumption of offensive actions in certain directions and establishing full control over the territory of Donetsk and Luhansk regions.

The Russian army is withdrawing some units from near Kyiv. The State Agency of Ukraine on Exclusion Zone Management states that the territory of the Chornobyl nuclear power plant has been liberated. The General Staff of the Armed Forces of Ukraine considers it likely that some Russian forces will move to other directions.

The Russian army continues to blockade and shell Chernihiv. Viacheslav Chaus, head of the Chernihiv Regional Military Administration, reports active movement of Russian units in the region — regrouping of troops or their retreat.

Fighting near Izium continues with the Russian troops attempting to advance in a southeastern direction to block Sloviansk and Kramatorsk.

Strikes on Kharkiv’s residential areas and infrastructure has been recorded. As a result of the shelling, an underground gas pipeline in the city (Saltivka district) was destroyed, leaving some 34,000 consumers without gas. A rocket hit was also recorded near the center of Kharkiv, and constant artillery shelling of the city’s districts is underway. Data on casualties is being clarified. The head of the Kharkiv Regional Military Administration, Oleh Syniehubov, indicated that one of the city council buildings in the town of Dergachi was destroyed; one person was killed and three were wounded.

Russian troops are redeploying additional forces and equipment to Luhansk region. They are focused on taking control of Popasna and Rubizhne in the Luhansk region. They are  also shelling Lysychansk and Sievierodonetsk. Serhii Haidai, the head of the Luhansk Regional Military Administration, reports that at least 3 people, including a child under the age of 2, were killed in the region during the day.

A fire was reported at an oil depot in the Russian city of Belgorod near the Ukrainian border.

Fighting for Mariupol continues. Russian troops are also shelling the central part of the Donetsk region.

Pavlo Kyrylenko, head of the Donetsk Regional Military Administration, stated that Marinka, Krasnohorivka ta Novomykhailivka were shelled on the night of March 30-31. During the day, Ocheretyne community, Marinka, Kostiantynivka and Vuhledar were shelled. In these areas of the region 5 people were killed; 22 people (including 4 children) were wounded.

The command of the Armed Forces of Ukraine informs about the counterattack of the Ukrainian troops in the Zaporizhzhia direction. As a result, 5 populated areas near Huliaipole were liberated.

Russian troops launched missile strikes on a military facility in the Dnipropetrovsk region. An administrative building and a fuel depot were destroyed. The head of the Dnipropetrovsk Regional Military Administration, Valentyn Reznichenko, reported the deaths of 2 and injuries to 5 people.

As a result of the Ukrainian Armed Forces counterattack, control of 11 populated areas of Kherson on the border with Dnipropetrovsk region on the right bank of the Dnipro River was restored.

Minister for the Reintegration of the Temporarily Occupied Territories Iryna Vereshchuk reported that 1,458 people (631 Mariupol residents and 827 residents of towns in the Zaporizhzhia region) evacuated through three agreed humanitarian corridors in their own vehicles in Zaporizhzhia on March 31.

The Verkhovna Rada Commissioner for Human Rights Liudmyla Denisova stated that more than 400,000 Ukrainians have already been forcibly displaced from Ukraine to Russia since the start of the conflict. Among other things, the illegal deportation of Mariupol residents continues. According to the Ukrainian authorities, 45 thousand Mariupol residents have been taken to the territory of the Russian Federation and the territory of the temporarily occupied territories of Donetsk and Luhansk regions.

Russian troops continue to obstruct humanitarian operations. Near Chernihiv, they shelled at least two convoys of volunteers attempting to deliver humanitarian aid and evacuate people. The number of casualties is being estimated.

According to the Office of the President, there are 24 local government officials and civil servants in Russian captivity; information about two more people is being clarified.

According to updated data from the State Emergency Service, the number of casualties from the March 29 rocket attack on the Mykolaiv regional administration rose to 20 people.

According to the Ministry of Energy, as of March 31, more than 1,339 populated areas and more than 925,000 consumers remain de-energized in Ukraine. There are 338,000 consumers without gas supply.

Residents of the temporarily occupied Kherson region carry on peaceful pro-Ukrainian rallies. Residents of Hola Prystan protested calling for the release of the local mayor and other citizens kidnapped by Russian troops.

Davyd Arakhamiia, head of the Ukrainian negotiating delegation, announced that Ukrainian diplomats are actively working to find a scheme by which Ukraine will receive seized Russian assets as compensation for the damage caused by Russian troops.

According to the director of the National Bank of Ukraine’s Open Market Department, foreign exchange market turnover has fallen from $500-700 million to $100-200 million a day since Russia began its full-scale invasion.

German truck and bus manufacturer MAN said that its plants in Munich and Polish Krakow have been shut down since March 14 due to the termination of deliveries of electrical wires produced at Ukrainian plants.

During the day, Volodymyr Zelenskyi addressed the parliaments of Belgium, the Netherlands and Australia. He thanked partners for their support, called for increased military aid to Ukraine and strengthened economic sanctions against Russia.

In a telephone conversation, Volodymyr Zelenskyi discussed with Turkish President Recep Tayyip Erdogan further common steps towards peace in Ukraine and Turkey’s readiness to be a guarantor of Ukraine’s security. In addition, Minister of Defense Oleksii Reznikov informed Erdogan about the war crimes committed by Russia against Ukrainian civilians.

Minister of Foreign Affairs of Ukraine Dmytro Kuleba met with President of Poland Andrzej Duda in Warsaw and discussed defense and support for Ukraine.

Due to the position of the Russian Federation, the mandate of the OSCE Special Monitoring Mission to Ukraine, which had been operating in the country since 2014, was terminated. According to OSCE head and Polish Foreign Minister Zbigniew Rau, OSCE member states are now pursuing consultations on the organization’s further role and presence in Ukraine.

The United States has imposed a new sanctions package against Russia to prevent Russia from evading restrictions and buying critical Western technologies. The sanctions list includes 13 individuals and 21 companies from Russia’s aerospace, maritime and electronics industries. At the same time, the British government introduced new restrictive measures against Russian propagandists and state media. The Russian general Mikhail Mizintsev, who commands the siege of Mariupol, was also put on the sanctions list.

British Defense Secretary Ben Wallace stated that London and allies are discussing expanding support for Ukraine. It is a question of providing lethal weapons (including air and coastal defense systems, long-range artillery and counter-battery means), as well as training and logistical support.

Australia decided to provide aid worth $91 million, including $18.7 million of additional defense military aid to the Armed Forces of Ukraine, humanitarian aid worth $65 million and 70,000 tons of coal, as well as increased duties on imports of all products from the Russian Federation and Belarus by 35%.