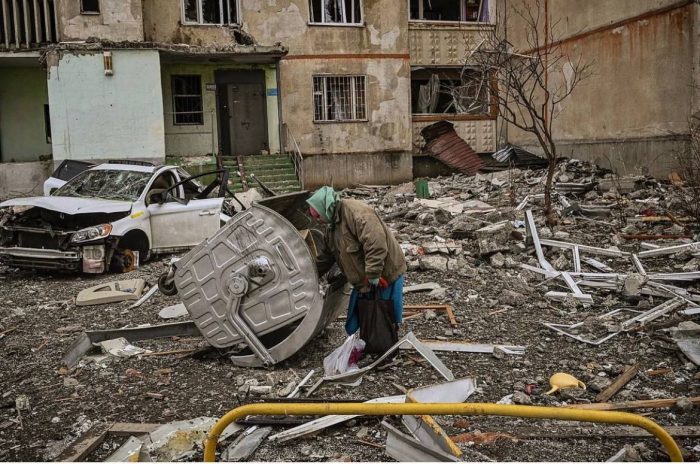 As of 8:00 a.m. on March 31, 2022, during the last 24 hours, approximately 320 civilians had been killed due to the Russian invasion, among them 2 children, including the preliminary data about 300 victims in Irpin (Kyiv region), (excluding all victims in Mariupol, Volnovakha, Luhansk, Zaporizhzhia, Kherson, Sumy, Kharkiv and Chernihiv regions). 70 people were injured, including 4 children. 2 civilians were captured, and a total more than 80 civilians were kidnapped by the Russian troops, they are mostly journalists, local government officials of the occupied settlements and the Ukrainian activists as well.

As of March 30, due to the Russian full-scale invasion against the population of Ukraine, 145 children were killed and 222 were wounded, according to the data of the Office of the Prosecutor General of Ukraine.

1. In Kherson (Kherson region) the Russian military kidnapped a local activist – Mykola Myronyuk (57 years old). He took an active participation in peaceful rallies against the Russian occupation. Myronyuk is being held prisoner for 7 days.

Currently, Mariupol remains under the complete blockade of the Russian troops, there are about 160,000 residents in the city. The Office of the United Nations High Commissioner for Refugees has not had any contact with the representatives of its Agency in Mariupol for last days. High Commissioner for Refugees Filippo Grandi has called on Russian troops to provide safety of the humanitarian corridors for the evacuation of civilians. He asked the Russian troops for the right to manage of the humanitarian corridors and not to fire on humanitarian ways. At the same time, the adviser to the mayor of Mariupol Petro Andryushchenko said that evacuation of people and bringing them across the territory of Zaporizhiazhia occupied by the Russian troops is becoming more and more dangerous. Occupational checkpoints are particularly dangerous, the civilians are captured, humanitarian aid is taken away, evacuation bus drivers are also kidnapped, and it’s not connection with some of the captured drivers for two days. There is evidence of the shelling of the International Committee of the Red Cross in Mariupol. The sign of the organization was on the roof of the warehouses, but the sign did not stop the Russian military.

The Russian occupiers illegally took the Ukrainian children away Mariupol, including Kira Obedinskaya, the daughter of captain of the national water polo team Yevheny Obedinsky, who was killed by the Russian military on March 17. The girl is wounded and currently in the hospital in occupied Donetsk The girl’s grandfather, Oleksandr Obedinsky, asks for help to return his granddaughter.

Kyiv region: approximately 303 people were killed, including victims in Irpin.

Kyiv – the actress of Kyiv’s theatre – Maria Demochko was killed (circumstances are unknown).

Irpin (Kyiv region) – the Ukrainian rescuers were able to bring 14 bodies. According to the preliminary information from the mayor of the city Alexander Markushin, the Russian military killed about 300 civilians while was keeping Irpin under their control.

Kyiv region: the Russian military fired 4 civilian cars, there were families in its. According to the preliminary data 2 people injured, the children’s fate is unknown still.

Vuhledar – 5 civilians were injured and in the shelling.

Marinka – 1 person was injured in the shelling.

Orikhiv (Zaporizhzhia region) – 1 civilian was injured in the shelling, the private houses were destroyed and the children’s hospital was damaged.

Luhansk region: 2 people died, 7 were injured, including 2 children (information is being clarified).

Lysychansk, Popasna (Luhansk region) – the Russian military carried out airstrikes on Popasna and fired residential neighborhood and kindergarten in Lysychansk. 2 persons were killed and 5 civilians were injured. Among wounded people 2 of them are parents and 2 children (1 and 7 years old). The children are heavy wounded – amputation of their legs is required.

Luhansk region – 2 persons were injured. The victims were registered in Bakhmut, Donetsk region.

Mykolaiv region: 3 civilians were killed and 2 were injured.

Mykolaiv – On March 29 the Russian army carried out an air strike on the building of the public administration of Mykolaiv region. The building was destroyed from the 1st to the 9th floor. The number of the victims has increased from 12 to 15 killed and from 34 to 36, who were injured.

Trostyanets (Sumy region) – 1 civilian was blown up by a mine. The Russian military mined many town’s streets, even the city’s graveyard.

Kharkiv – the father of the famous Ukrainian athlete Artem Pochtarev died in the Russian shelling.

Izium district (Kharkiv region) – 2 victims were found under the rubble of the destroyed house, including one child. 5 civilians were injured.

Slobozhanske (Izium district, Kharkiv region) – a mother and a child (an 11-year-old boy) died from the artillery shelling by the Russian troops.

Dergachi (Kharkiv region) – the Russian military fired on the city council building, 1 person was killed and 3 were injured.

Chuhuiv district (Kharkiv region) – 2 civilians were blown up by a mine, 5 were injured, including a baby (6 months old).

Kherson region: 1 civilian died, the number other killed is unknown.

Muzykivka (Kherson region) – it became known that on March 20 a local resident blew up a mine.

Stanislavsky territorial community – the settlement is under constant fire, there are dead and wounded (information is being clarified).

Chernihiv region: 1 person was killed, 41 people were injured, including 1 child.

Chernihiv – according to the mayor of Chernihiv Atroshenko as a result of new shelling of Chernihiv, including air strikes, 35 wounded people were brought to the city hospitals. (information is being claryfied). Many houses, a library and shops were destroyed and damaged.

Nizhyn (Chernihiv region) – 1 person was killed and 6 were injured in the shelling by the Russian troops, including one child.