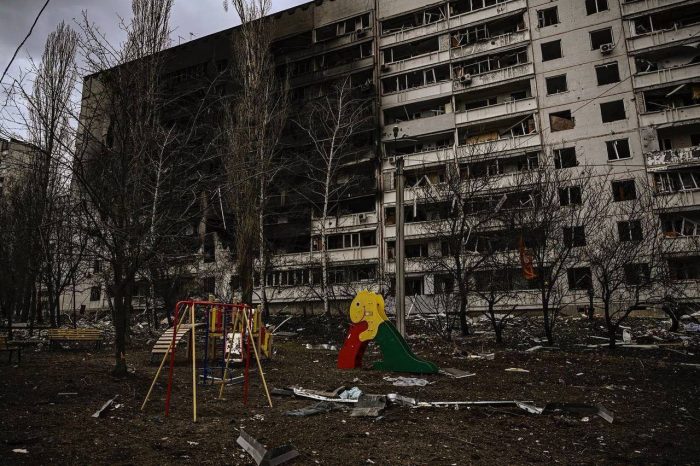 As of 8:00 a.m. on April 1, 2022, during the last 24 hours, approximately 303 civilians had been killed due to the Russian invasion, among them 5 children, including the preliminary official data about 250 victims in Bucha (Kyiv region), (excluding all victims in Mariupol, Volnovakha, Luhansk, Zaporizhzhia, Kherson, Sumy, Kharkiv and Chernihiv regions). 84 people were injured, including 5 children. 3 civilians were captured, and a total more than 80 civilians were kidnapped by the Russian troops, they are mostly journalists, local government officials of the occupied settlements and the Ukrainian activists as well.

As of March 31, due to the Russian full-scale invasion against the population of Ukraine, 148 children were killed and 232 were wounded, according to the data of the Office of the Prosecutor General of Ukraine.

Three civilians were captured by the Russian troops in the occupied settlements:

1. In Molochansk (Zaporizhzhia region) the Russian military kidnapped a mayor of the town – Iryna Lypka and her deputy – Vitaliy Repin.

Kyiv region: approximately 252 people were killed, including victims in Bucha.

Bucha (Kyiv region) – according to the preliminary information since Bucha’s occupation by the Russian army approximately 250 civilians were killed. Even now these are evidences and testimonies of the harsh behavior of the Russian troops to the local residents – rape of women, including girls aged 12-15, tortures, killing of the ordinary people of all ages.

Hostomel (Kyiv region) – it became known that the Russian troops fired the car, in which a woman was trying to take out her child. They had just gone away from their house 700 meters how the Russian military opened fire. The mother was killed on the spot.

Vuhledar – 2 civilians were killed and 15 were injured in the shelling.

Kostiantynivka –  1 civilian was killed and 1 was injured in the shelling.

Marinka – 1 civilian was killed and 2 were injured in the shelling.

Melekino – civilians were trying to go away from Mariupol and the Russian military killed them near Melekino, 2 persons died, including 1 child.

Luhansk region: 4 people died, 2 were injured (information is being clarified).

Mykolaiv region: 6 civilians were killed and 36 were injured, including 1 child.

Mykolaiv – On March 29 the Russian army carried out an air strike on the building of the public administration of Mykolaiv region. The building was destroyed. The number of victims has increased from 15 to 21 killed.

Sumy region – on March 8 the Russian military carried out air bomb on residential neighborhood. The number of casualties The number of victims has been established just now. The airstrike killed 22 people, including 3 children.

Kharkiv – the Russian troops carried out a cruise missile strike on the city center for the last day, shelling Kharkiv with artillery and multiple launch systems. The number of victims is being clarified.

Kharkiv region – 10 people were killed, including 1 child, according to the official general information of the National Police for the last day in Kharkiv region.

Mala Rohan (Kharkiv region) – after liberation of the settlement it became known that the Russian invaders during the occupation time shot the car convoy with civilians who were trying to flee the conflict zone. Civilians, families, children were in the cars. Unfortunately, a huge number of them died. The accurate information is being clarified.

Chernihiv – the Russian military shelled a humanitarian convoy consisted of 5 buses. The Ukrainian volunteers tried to deliver a humanitarian aid to the residents of the blocked city. They carried medicine, food, water, and basic necessities. As a result of the shelling, 1 volunteer died – a second-year student of the Pedagogical University – Anastasia Tagirova, 4 volunteers were seriously injured, including the bus driver.

According to the mayor of the city Atroshenko, despite Russia’s statement on the withdrawal of troops from the Chernihiv direction, the shelling has become even more intensive than during the past day. The Russian troops launched air strikes on Chernihiv. As a result, 20 injured residents were taken to hospital.