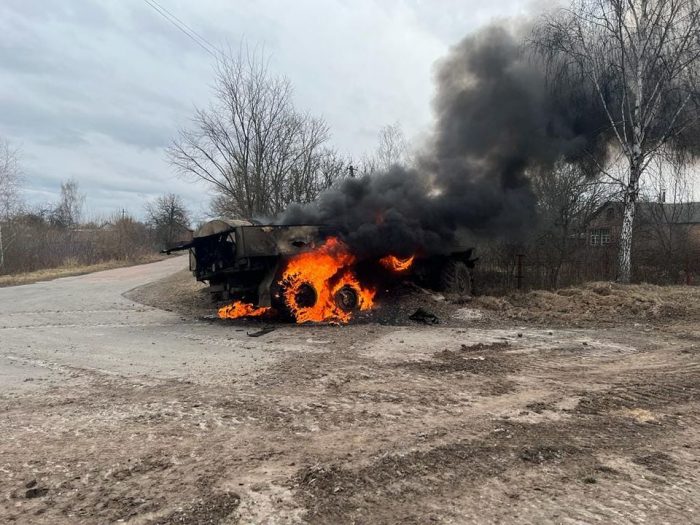 Russian troops are regrouping their forces, concentrating their military efforts on attacks on the Armed Forces of Ukraine units in the area of the Joint Forces Operation in the east of Ukraine. The Ukrainian General Staff reports a build-up of material and technical and logistics support for Russian troops in the eastern and southern directions.

Russian troops continue to hold positions near the northwestern outskirts of Kyiv. According to the Ukrainian General Staff, the Russians are redeploying troops to the area of the Chornobyl nuclear power plant. Thus, the movement of mixed columns of equipment from the urban-type settlement of Ivankiv in the direction of the nuclear power plant has been recorded. At the same time, a partial retreat of Russian troops from Kyiv in the eastern (Brovary) direction is registered.

Russian forces are focusing on sabotage and reconnaissance activities, engineering positions and artillery strikes against the Ukrainian Armed Forces positions and infrastructure near the city of Chernihiv.

Viacheslav Chaus, head of the Chernihiv Regional Military Administration, reported that on the night of March 29-30, Chernihiv and other cities in the region were shelled. As a result of the shelling of the city of Nizhyn, which occurred the day before, one person was killed; 6 were wounded (among them one child).

Russian troops are seeking to encircle Ukrainian units in the area of the Joint Forces Operation. They are launching attacks from the northwestern (Izium, Kharkiv region) and eastern (Popasna and Rubizhne, Luhansk region) directions. Position battles continue in Popasna and Rubizhne.

Attacks on residential facilities in Luhansk region are ongoing. The head of the Luhansk Regional Military Administration Serhii Haidai stated that residential areas of Lysychansk, Kreminna, Rubizhne and Sievierodonetsk were shelled in the morning. According to the State Emergency Service, 1 person was killed and 4 wounded as a result of the shelling of Lysychansk.

Russian troops continue shelling the Kharkiv region. Izium remains the most critical point in the region. The head of the Kharkiv Regional Military Administration Oleh Syniehubov reported that over the past 24 hours, the city districts of Saltivka, Oleksiivka, Kholodna Hora, and KhTZ, as well as the suburbs of Chuhuiv and Derhachi were hit by the shelling.

The Russians focused their efforts on taking control of the city of Mariupol. Attacks by Russian troops in the Marinka, Novobakhmutivka and Zolota Nyva areas have also been reported.

The head of the Donetsk Regional Military Administration Pavlo Kyrylenko also reported on the continuation of shelling of populated areas located near the border. Marinka and Ocheretyne came under fire.

According to Ivan Arefʼiev, a spokesman for the Zaporizhzhia Regional Military Administration, Russian troops fired on the village of Novoivanivka (Zaporizhzhia region). 3 people were injured. In addition, artillery shelling and air strikes affected Huliaipole and Orikhiv.

Strikes continue on strategic industrial facilities of the region. In particular, a missile strike was launched on the oil depot in the Dnipro. The object was destroyed; there are no casualties. According to the head of the Dnipropetrovsk Regional Military Administration Valentyn Reznichenko, another missile hit the plant in Novomoskovsk.

In the south, Russian forces are turning to defensive action. According to the General Staff, they are settling into their positions. Artillery and aviation are being used to restrain the Ukrainian Armed Forces units.

The head of the Khmelnitskyi Regional Military Administration, Sergii Hamalii, reported that three missile strikes were launched against industrial facilities in the Khmelnitskyi region on the night of March 30.

A massive cyberattack is being launched against the official website of the Kyiv Regional Military Administration, according to its head Oleksandr Pavliuk.

Ukraine has launched a portal of reports on the assets of persons involved in the Russian aggression against Ukraine. It interacts with other countries to exchange data.

Minister for Reintegration of the temporarily occupied territories Iryna Vereshchuk reported that on March 30 more than 1.5 thousand people were evacuated from the zone of active hostilities by three agreed humanitarian corridors in their own vehicles. In Zaporizhzhia, 812 people from Mariupol and 718 residents of populated areas in Zaporizhzhia region reached Zaporizhzhia.

According to the Prosecutor General, as of March 30, 145 children were killed and 222 wounded in Ukraine as a result of the conflict.

The Office of the UN High Commissioner for Human Rights has updated data on civilian casualties in Ukraine. As of March 30, the total number of casualties stands at 3,090 (1,189 dead and 1,901 wounded).

According to Michelle Bachelet, the UN High Commissioner for Human Rights, at least 55 medical facilities were damaged, 10 were destroyed, and two were looted during the fighting in Ukraine. More than 4 million people have gone abroad; some 6.5 million are internally displaced.

The Security Service of Ukraine reports that the agency has obtained new intercepts of Russian military telephone conversations from which cases of rape of minors in Russia’s temporarily occupied territories have come to light.

The head of the Mykolaiv Regional Military Administration, Vitalii Kim, specified the casualty figures from the March 29 strike on the regional administration building. He said that the death toll from the Russian attack had risen to 15.

The abduction of civilians by Russian troops in the Kherson region continues. As of March 30, 8 people are known to have been kidnapped in the Hola Prystan community. A priest of the Orthodox Church of Ukraine, Serhii Chudynovich, was kidnapped in Kherson, which is temporarily occupied by Russian troops.

According to Maksym Strelnyk, a representative of the Izium City Council, only 3,000 citizens were evacuated from the town of Izium in the Kharkiv region. Twenty thousand residents continue to remain in the town under constant shelling without access to water, light, gas and mobile communications, and without the possibility of receiving appropriate assistance through blocked humanitarian corridors.

The mayor of the recently liberated Irpin, Oleksandr Markushyn, spoke about the losses suffered by the town as a result of the hostilities. According to him, there is no data yet on the exact number of civilians killed. He believes that up to 300 civilians were killed in Irpin.

Human Rights Watch reports that Russian troops have been mining Ukrainian territory using a remote mining engineering system called Zemledelie. This allows significant areas to be mined in a very short period of time. According to the Ukrainian General Staff, cases of use of the newest Russian anti-personnel mines with the seismic sensor POM-3 Medallion have been registered in the Kharkiv and Sumy regions.

After negotiations in the European Parliament and other European institutions in Brussels, the Ukrainian Parliament Commissioner for Human Rights, Liudmyla Denisova, stated that not a single accusation against Ukraine of allegedly inhumane treatment of Russians captured during the invasion of Russian troops was confirmed.

According to Yurii Ryzhenkov, director general of Ukraine’s largest mining and metallurgical holding Metinvest, Ukraine’s metallurgy losses from the war initiated by Russia amount to 30-40% of its prewar capacity.

According to the White House, the U.S. intends to provide the Ukrainian government with $500 million in direct budget aid.

Finance Minister Serhii Marchenko said that the government is preparing for another wave of spending cuts to consolidate funds for the army.

On March 30, President of Ukraine Volodymyr Zelenskyi addressed the Norwegian Parliament. He declared that Ukraine needed weapons to repel Russian aggression (including anti-ship and anti-aircraft systems, armored vehicles and artillery systems) and called on Norway to deliver them.

Volodymyr Zelenskyi had an hour-long phone conversation with U.S. President Joe Biden to discuss additional sanctions against Russia and humanitarian aid to Ukraine announced last week. Zelenskyy told the US president about the state of Ukrainian-Russian negotiations.

The Ukrainian president also discussed with Abu Dhabi Crown Prince Mohammed bin Zayed the issues of food security and thanked the UAE for the humanitarian assistance and support of Ukraine within the UN.

IAEA Director General Rafael Mariano Grossi visited the South Ukraine Nuclear Power Plant where he held a meeting with Ukrainian officials. The meeting discussed concrete steps on the part of the IAEA to provide urgent technical assistance to Ukraine to ensure the safety of its nuclear facilities.