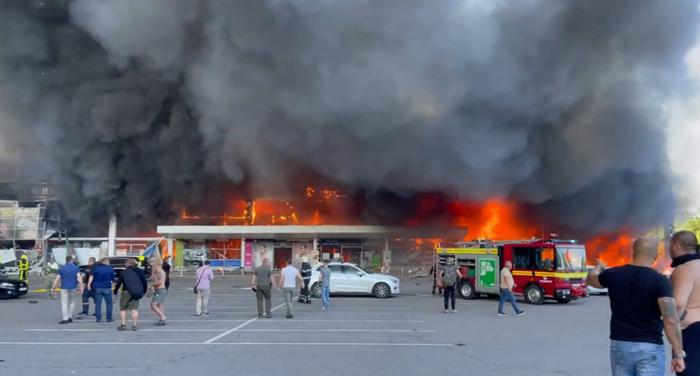 Thanks for reading Russia-Ukraine War Newsletter!

Subscribe for free to receive new posts and support our work

Russian forces attempt to encircle Lysychansk, advancing on the city from the south and outflanking it from the southwest. In addition, Russian forces have advanced in the Bakhmut direction; they are launching attacks in the Sloviansk and Kharkiv directions. They continued to launch missile strikes against industrial facilities in Ukraine. The indiscriminate strikes and the use of obsolete weapons result in the destruction of civilian infrastructure and large-scale casualties among the population.

The Battle for Donbas

The key objective of Russian forces remains the encirclement of the Ukrainian Armed Forces’ grouping defending Lysychansk. They are advancing on Lysychansk from the southern and southwestern directions. At the same time, the Russian forces are launching attacks in the Bakhmut direction, aimed at blocking the Bakhmut-Lysychansk highway. Russian troops succeeded in advancing towards Bakhmut from the east.

Concurrently with the attacks, the Russian military purposefully strikes critical infrastructure objects and fires at the civilian population. On June 27, in particular, a crowd of local residents in Lysychansk who were replenishing their water supplies was shelled with MLRS fire. As a result, 8 people were killed and 21 others were wounded.

In the north of Donetsk region, Russian troops concentrated their efforts on an offensive against Sloviansk. The city was hit and civilian infrastructure was damaged as a result.

In other parts of the front, Russian forces did not conduct an offensive, yet they continue intensive shelling. In total, at least 5 civilians were killed and 23 injured in the Donetsk region between June 27–29.

The situation in the Kharkiv region remains unchanged: Russian forces are concentrating their efforts on preventing the advance of the Armed Forces of Ukraine on the national Ukrainian borders and, if possible, conducting assault actions to improve their own tactical position near Kharkiv.

Rocket attacks on Kharkiv continue unabated. The Russian army keeps destroying civilian infrastructure and residential buildings. In particular, during June 27–29, a school and an administrative building were damaged; Kharkiv’s residential districts of North Saltivka and Industrialnyi suffered destruction. Other populated areas of the region were also targeted by shelling. As a result, at least 7 people were killed in the territory of the region and 31 others were wounded.

The situation on the front line in Zaporizhzhia region has remained without change. Russian troops focus their main efforts on holding the lines and continue shelling along the entire line of contact using MLRS and small arms artillery.

Russian forces keep reinforcing their lines to counter the Ukrainian offensive near the administrative border of Kherson with Dnipropetrovsk and Mykolaiv regions.

On the morning of June 28, a massive missile strike was launched against Mykolaiv region, including Ochakiv and Mykolaiv. According to preliminary information, 3 people were killed and 6 injured in Ochakiv. On June 29, the shelling of Mykolaiv resumed. As a result, a residential building was damaged, killing at least 3 people and wounding 5 local residents. In the Kryvyi Rih direction, the Russian military shelled the Kryvyi Rih thermal power plant.

The Ukrainian Armed Forces retaliate against Russian equipment and troops, using not only artillery but also aviation. The shelling of Russian positions on the temporarily occupied island of Zmiinyi is ongoing.

The Russian Federation continues to launch missile strikes against civilian infrastructure and residential facilities. In particular, on June 27, two Russian missiles hit a shopping mall and the Kredmash plant in the city of Kremenchuk (Poltava region). Presumably, it was the industrial facility that the attack was aimed at. But the type of weapon used, the Kh-22 missile, was developed back in the late 1950s and was intended for strikes against enemy ship groupings. It was not designed for precision strikes against ground targets. Its use against a city leads to indiscriminate strikes against civilian targets. According to preliminary reports, 20 people were killed, 59 were wounded and more than 40 were missing in the attack on the destroyed shopping mall.

On June 28, a missile strike on Dnipro damaged a service station building; 2 people were killed.

Shelling of the border areas of Chernihiv and Sumy regions persisted. It became particularly intense on June 28.

Ukraine’s Ministry of Digital Transformation reports on the progress of the confrontation with Russia in cyberspace. In four months — from February 26 to June 26 — hackers attacked more than 4.2 thousand Russian online resources. Among the latest examples of successful operation was hacking of the website of the Russian state institution “Rosregister” on June 28. Congratulations on the Constitution Day of Ukraine were posted on the main page of the site.

The Russian Federation also conducts operations in cyberspace. According to the Security Service of Ukraine, Russian hackers tried to interfere with the work of Ukrainian TV channels participating in a nationwide telemarathon on Constitution Day. At the same time, they carried out cyber attacks against Lithuania and Norway because of the tough stance of these states to comply with the sanctions imposed against Russia.

According to the Office of the UN High Commissioner for Human Rights, as of June 27, the number of civilian casualties in Ukraine since the start of the large-scale Russian invasion is 10,631 (4,731 killed and 5,900 wounded). As of the morning of June 29, more than 968 children (341 children killed, 627 wounded) suffered as a result of the armed aggression of the Russian Federation in Ukraine.

The release of Ukrainian military from Russian captivity is in progress. On June 28, prisoners of war were exchanged according to the “17 for 15” formula. 16 Ukrainian servicemen and 1 civilian returned home. On June 29, the largest POW exchange since the start of the full-scale war took place. As a result, 144 servicemen, including 95 defenders of Azovstal, were released. The exchange of bodies of fallen military personnel was also underway. On June 28, 46 bodies of fallen Ukrainian servicemen were returned (among them the bodies of 21 Azovstal defenders).

The Russian military continues to hold captive a large number of Ukrainian civilians, including representatives of local authorities in the temporarily occupied territories, who have not cooperated with the occupiers. On June 28, Russian troops released two chairmen of local communities in Kherson region, but 4 city heads from that region are still in captivity. On June 28, Russian troops detained Kherson mayor Ihor Kolykhaiev.

Russian forces continue to carry out intensive airstrikes and rocket attacks on civilian and infrastructure facilities. In the Luhansk region, the Sievierodonetsk thermal power plant was completely destroyed. Sievierodonetsk and the surrounding settlements remain without electricity. In Zaporizhzhia region, as a result of shelling by the Russian military and damage to power and gas supply lines, 84 population centres were left without electricity and 108 were left without gas.

On June 28, Russian media reported two explosions near the port of the temporarily occupied city of Berdiansk (Zaporizhzhia region), which may be the result of resistance activities.

Ukraine and the European Union signed an agreement on the transport of goods by road, which abolishes the need for permits for Ukrainian carriers to perform bilateral and transit traffic. The agreement also provides for measures to simplify the recognition of driving documents.

On June 29, Prime Minister Denys Shmyhal informed that Ukraine received $1.3 billion in grant aid from the U.S. as part of the budget financing package. The total benefit under this program is $7.5 billion.

Problems with fuel shortages in Ukraine are gradually being solved. Due to an increase in fuel supplies to Ukrainian gas stations, it is expected that automobile drivers will no longer be limited in their purchases as early as July.

The Security Service of Ukraine proceeds with its search of Russian-affiliated business facilities. In particular, on June 27, the SSU reported that it had seized UAH 4.5 billion worth of assets of Ukrainian companies of Russian financial and industrial groups, including Rostec Corporation, aluminum company RusAl and oil holding company Tatneft.

NATO summit is held in Madrid on June 28-30. Heads of states and governments of 30 member and partner countries of the Alliance — Finland, Sweden, Ukraine and Georgia — participate in the summit. NATO approved a new Strategic Concept, which defines priorities of the Alliance’s development until 2030 and identifies Russia as the main threat to Euro-Atlantic security. The Alliance agreed to provide Ukraine with a comprehensive assistance package against the background of Russian aggression. Also, the heads of state and government of NATO member states took the historic decision to invite Finland and Sweden to become members of the Alliance.

World leaders continue to visit Ukraine, showing their solidarity and support for its territorial integrity. Ukrainian President Volodymyr Zelenskyi held talks with Moldovan President Maia Sandu and Indonesian President Joko Widodo. The meetings discussed strengthening of the global anti-war coalition, unblocking of Ukrainian sea ports and resumption of agricultural exports, energy cooperation, expansion of export transit potential, provision of humanitarian aid and post-war reconstruction of Ukraine. It is worth mentioning that this was the first visit of Indonesian president to Ukraine in the history of diplomatic relations and the first visit of a leader of Asian state to Kyiv since February 24. Against this backdrop, Ukraine and Indonesia signed an agreement on mutual visa-free travel regulations for citizens of both countries.

Also, President Volodymyr Zelenskyi discussed with James Risch, co-chairman of the US Senate Committee on Foreign Relations, the strengthening of cooperation in the defence sector between the US and Ukraine, the increase of sanctions against Russia and the need to recognize Russia as a state-sponsor of terrorism.

In addition, on June 28, Volodymyr Zelenskyi spoke online during a meeting of the UN Security Council, which was convened because of the rocket attacks on the shopping mall in Kremenchuk. He called for Russia to be excluded from the Security Council because its veto power undermines the institution’s capacity to respond to current challenges and threats. Zelenskyi recalled that Russia should be held accountable at the international level in accordance with the UN charter, which allows for the creation of a special tribunal to investigate the actions of the Russian military.

The world continues to provide Ukraine with logistical and defense assistance. The United Kingdom announced additional military aid worth £1 billion. The European Union announced the transfer of more than 90 off-road trucks to Ukraine to support the medical, engineering and logistical capacities of the Ukrainian Armed Forces. On 28 June, France declared plans to transfer “a significant number” of French-made VAB armored personnel carriers to Ukraine. It also became known that Germany and the Netherlands intend to transfer additional Panzerhaubitze 2000 self-propelled artillery units to Ukraine. Italy is also ready to provide Ukraine with additional weapons. The Norwegian government has decided to transfer three M270 multiple-launch rocket systems and five thousand 155 mm shells to Ukraine with the help of the United Kingdom.

The international community is steadily increasing financial assistance to Ukraine to overcome the challenges posed by the Russian invasion. Finland has decided to provide an additional €70 million to Ukraine for humanitarian aid and cooperation in education, the rule of law, energy and climate issues. Canada will provide Ukraine with a concessional loan of 200 million Canadian dollars to support immediate public spending needs. Ukraine has received an additional 65 billion Japanese yen in preferential credit from Japan as part of a loan agreement. These funds will be allocated to the state budget to finance priority social, humanitarian and healthcare expenditures.