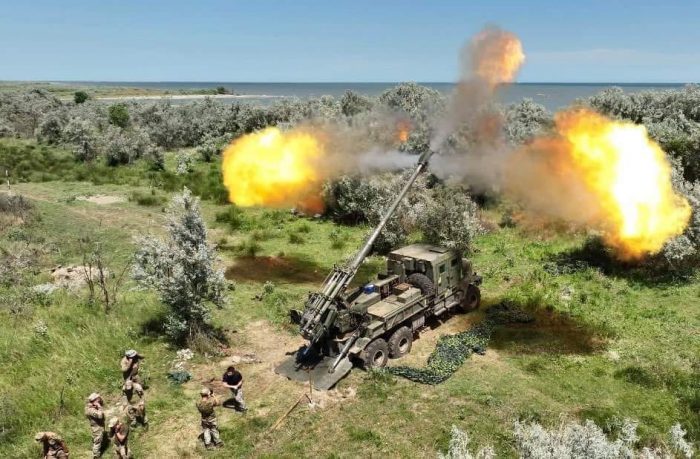 The threat of encirclement resulted in an organized retreat of Ukrainian troops from Lysychansk and entrenchment at the Siversk-Bakhmut line. Thus, Russian troops have almost completely occupied the territory of the Luhansk region. They continue preparations for an offensive on Sloviansk and actively use artillery and aviation to attack Ukrainian Armed Forces positions in other parts of the front. In the strategically important northwestern part of the Black Sea, Russian commanders were forced to evacuate their garrison from Zmiinyi Island due to shelling by the Ukrainian forces. The Armed Forces of Ukraine are also stepping up attacks on Russian troops in the temporarily occupied territories, using high-precision weapons received from Western partners.

After capturing Sievierodonetsk, Russian troops have been storming Lysychansk for 10 days. Particularly persistent fighting took place near the Lysychansk oil refinery. Under the threat of encirclement, in order to save their personnel, the Ukrainian troops carried out an organized retreat from the city and consolidated in new defense lines.

In the Sloviansk direction, the Russian troops are regrouping and preparing to resume their offensive. On July 1, combat operations intensified in the Kramatorsk direction.

The Ukrainian Armed Forces are targeting Russian ammunition and fuel depots in the temporarily occupied territories such as Popasna, Kadiivka and Rovenky (Luhansk region); and Snizhne (Donetsk region).

Meanwhile, Russian troops continue to fire indiscriminately on Ukrainian populated areas. On July 2-3, there was massive rocket artillery fire on Sloviansk, and strikes on Kramatorsk and Dobropillia. In total, between June 30 and July 3, at least 19 people were killed and 55 people were injured in the territory of the Donetsk region.

Russian troops are defending in the Kharkiv direction. Local attacks are attempted in some parts of the front in order to regain lost positions. Shelling of Kharkiv and surrounding settlements is ongoing. Russian troops resort to systematic air and missile strikes. During the recent days, at least 4 people were killed and 14 were injured in the Kharkiv region.

On the night of July 3, explosions were recorded in the Russian city of Belgorod, which, according to preliminary data, killed 4 people and damaged more than 40 houses. The destruction was probably caused by a Russian air defense system that tried to shoot down missiles or UAVs aimed at a military unit located within the city limits. Russian air defense systems also operated in the Kursk area.

On the territory of Zaporizhzhia region the situation remains unchanged. Shelling continues near the front line. The Armed Forces of Ukraine are striking at the Russian rear infrastructure in the temporarily occupied territories. On the night of July 3, one of the Russian bases in Melitopol, located on the territory of the local airport, was hit.

Constant shelling of the temporarily occupied Zmiinyi Island by the Armed Forces of Ukraine inflicted significant losses on the Russian troops, making it impossible to use the facility as an advanced radio reconnaissance and air defense base capable of ensuring control over the approaches to Odesa. As a result, the Russian command withdrew its military from the island due to the virtual isolation of the garrison and vulnerability to Ukrainian strikes.

Shelling continues along the front line in the Mykolaiv and Kryvyi Rih directions. Almost every day, Russian troops launch missile strikes against Mykolaiv.

On the night of July 1, Russian troops launched a missile attack on the resort village of Serhiivka in Odesa region, using X-22 anti-ship missiles, which are not suitable for pinpoint strikes. The attack damaged a high-rise building and recreation facilities (including a children’s rehabilitation center owned by Moldova). Overall, 21 people (including a child) were killed in the attack; 39 people were wounded.

On July 2, Russian forces struck the city of Pavlohrad in Dnipropetrovsk region, which is an important transportation hub.

The press service of DTEK, Ukraine’s largest private energy conglomerate, reported a cyber attack on its IT infrastructure. Its goal is to undermine Ukraine’s energy security and disrupt the supply of electricity to the population.

According to the UN Office of the High Commissioner for Human Rights, as of June 27, the number of civilian casualties in Ukraine since the start of the large-scale Russian invasion is 10,631 (4,731 killed and 5,900 wounded). As of the morning of July 3, the armed aggression of the Russian Federation in Ukraine resulted in more than 986 child casualties (344 children killed, 642 wounded).

During the full-scale war, Ukraine was able to return more than 400 bodies of dead (both military and civilian). According to Deputy Prime Minister and Minister for the Reintegration of the Temporarily Occupied Territories Iryna Vereshchuk, the Russian side is reluctant to exchange the dead, trying to hide its own losses from society. In addition, Iryna Vereshchuk stated that, according to calculations, about 350-400 thousand Ukrainians were forcibly transferred to the territory of the Russian Federation. The deportees are deliberately moved to remote regions of Russia and deprived of means of communication to prevent their return to the territory of Ukraine.

The Mariupol City Council reported more than 10,000 imprisoned Ukrainians in the temporarily occupied territories of the Donetsk region. Captured civilians are held in terrible conditions with no medical care and insufficient water and food. They are subjected to torture for their active pro-Ukrainian civic stance.

The Russian military continues to kidnap Ukrainian politicians and statesmen. As of July 2, 8 heads of cities, villages, and towns from Kherson, Zaporizhzhia, and Kharkiv regions are in Russian captivity. Russia is kidnapping local government officials in an attempt to coerce their cooperation, or for further use in a prisoner exchange.

A railroad bridge near Melitopol in the temporarily occupied territory of Zaporizhzhia region was blown up, which was used by the Russian military to transport supplies to the front line.

European partners continue to help Ukraine with financing priority budget expenditures during martial law. In particular, on July 1, the Ministry of Finance announced another €1 billion grant from Germany.

In June 2022, Ukraine managed to export 2.7 million tons of agro-industrial products which is 30% more than in May. Russia’s full-scale military aggression and its blockade of seaports are affecting Ukraine’s reconfiguration of food chains through neighboring countries. Before February 24, the main buyers of Ukrainian products were China, India, the Netherlands and Egypt; currently they are Ukraine’s closest neighbors (Romania, Poland, Bulgaria and Turkey).

Ukrainian President Volodymyr Zelenskyi, Speaker of the Verkhovna Rada Ruslan Stefanchuk and Prime Minister Denys Shmyhal signed a joint statement on July 1 on the European Council decision to grant Ukraine candidate status for EU membership. The document is a sign of “unity of all branches of power and evidence of determination to achieve the strategic goal of Ukraine — full membership in the European Union”. Also, during the plenary session of the Verkhovna Rada of Ukraine, the EU flag was officially set up in the Parliament.

Ukrainian authorities continue active dialogue with world leaders whose visits are an important demonstration of solidarity with the Ukrainian people. In Kyiv, President Volodymyr Zelenskyi met with the Prime Minister of Australia, Anthony Albanese. This is the first visit of an Australian government leader to Ukraine in the history of relations between the two countries. Also, Volodymyr Zelenskyi met with Prime Minister of Norway Jonas Gahr Støre. During the talks the parties discussed topics of cooperation between the countries, the post-war reconstruction of Ukraine, defence and humanitarian aid. Gahr Støre also announced that Norway would provide a package of assistance to Ukraine worth 1 billion euros to support the social sphere and macro-stability of the state.

At the same time, Ukrainian Prime Minister Denys Shmyhal met with Valerie Pecresse, President of the Regional Council of Île-de-France. During the meeting, they discussed assistance in the reconstruction of Kyiv and Chernihiv regions. As Denys Shmyhal noted, the regional principle should be a key element of the future reconstruction plan.

An outstanding factor in support of Ukraine is the strengthening of international military support. The U.S. Department of Defense announced a new $820 million military aid package for Ukraine. Ukraine’s armed forces will receive additional ammunition for HIMARS missile systems, 155mm artillery shells, two NASAMS air defense systems, and four counter-battery radars. The United Kingdom will allocate £1 billion in military aid to Ukraine. The funds will be used for air defense systems, drones, electronic warfare equipment and other technical means for the Ukrainian military.

Also Australia is ready to provide Ukraine with additional financial aid and equipment (14 armored personnel carriers and 20 Bushmaster armored vehicles). Canadian Prime Minister Justin Trudeau announced that his country is working to finalize an agreement to provide Ukraine with armored combat support vehicles. In addition, the Armed Forces of Ukraine will receive additional high-resolution cameras from Canada for use on Bayraktar drones. French President Emmanuel Macron stated that Ukraine would soon receive additional advanced Caesar howitzers, as well as other military, economic and humanitarian aid needed to counter Russian aggression.

Sanctions against Russia are tightening in response to Russian aggression in Ukraine. The Australian government imposed restrictive measures against 16 Russian ministers and oligarchs, including representatives of Putin’s inner circle and ministers of agriculture, transport and construction.

In Turkey, a Russian cargo ship was detained with stolen grain taken from the temporarily occupied city of Berdiansk (Zaporizhzhia region). The prosecution of those involved should be a signal that trade in stolen agricultural products in Ukraine is unacceptable.

In response to the Syrian Arab Republic’s recognition of the independence of the so-called Donetsk and Luhansk People’s Republics, Ukraine severed diplomatic relations with Syria. Such a step by Damascus once again confirms the total dependence of the Assad regime on the Kremlin.