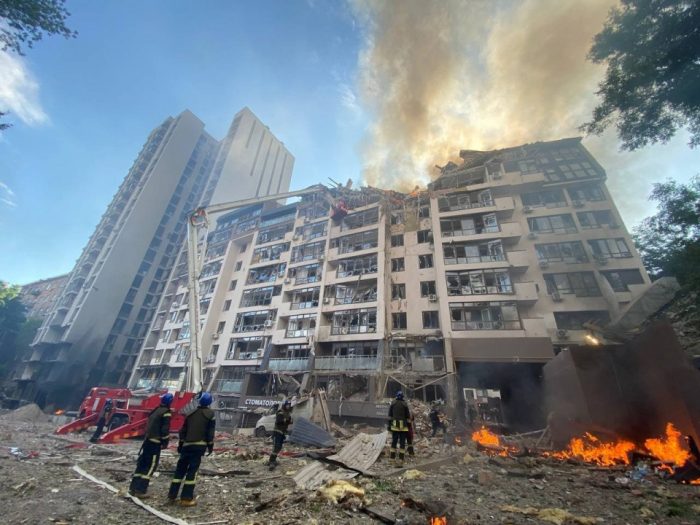 The main fighting is ongoing in eastern Ukraine. Due to the threat of encirclement, the Armed Forces of Ukraine have carried out an organized retreat from Sievierodonetsk, and are now holding their defenses in Lysychansk, on the right bank of the Siverskyi Donets River. Russian forces are attempting to advance in the direction of that city, as well as continuing attacks near Bakhmut and Sloviansk. In other parts of the front, local clashes and heavy shelling continue. During the weekend of June 25-26, Russian forces stepped up their rocket attacks on Ukrainian territory.

The Battle for Donbas

The Sievierodonetsk-Lysychansk agglomeration area remains the center of active combat operations. Russian troops are attempting to encircle the Ukrainian Armed Forces’ grouping by advancing on Lysychansk from the south and shelling the road from that city to Bakhmut. The Ukrainian military carried out an organized retreat from Sievierodonetsk and its surroundings to prepared defensive positions. Thus, the eastern bank of the Siverskyi Donets River is under the control of Russian troops. The next target of the Russian military offensive is Lysychansk, but the Armed Forces of Ukraine have so far repulsed an assault near the southern outskirts of the city.

On the Sloviansk direction, Russian forces are seeking to create conditions for a renewed offensive and continue their assault in the Sviatohirsk area. There are also ongoing attacks in the Marinka area near Donetsk.

In other parts of the front, Russian forces are shelling the positions of the Armed Forces of Ukraine and civilian infrastructure. They use aviation to launch missile strikes. In total for the period of June 23-26, at least 15 civilians were killed and 19 injured in the Donetsk region.

The Ukrainian Armed Forces continue to carry out targeted strikes against the infrastructure of Russian forces located in the temporarily occupied territories. On June 25, military facilities in Svatove (Luhansk region) and Snizhne (Donetsk region) were hit.

In the Kharkiv direction, Russian troops remain on the defensive, carrying out local assault actions to improve the tactical situation in certain sections of the front. They launch artillery strikes against Kharkiv and populated areas near the regional center. Between June 23-26, at least 5 people were killed and 29 wounded in the Kharkiv region.

Shelling continues on the front line in Zaporizhzhia region. Russian troops use MLRS to strike positions of the Armed Forces of Ukraine and civilian infrastructure.

In the Kryvyi Rih and Mykolaiv directions, Russian forces are shelling and conducting counter-battery warfare. They use Uragan multiple rocket launchers and aviation. The shelling of Mykolaiv continues. At least 1 person was killed and 6 civilians were wounded as a result of the fighting on the territory of Mykolaiv region between 23-25 June.

Ukrainian troops also shelled Russian positions. In addition, on the night of June 26, a second missile strike was launched against the offshore gas production platform of Chornomornaftogaz, which was seized by Russian troops in 2014.

In the morning of June 25, Russian troops launched a large-scale missile attack on Ukraine from the territory of Belarus. The attack targeted the Yavoriv training ground in Lviv region (resulting in 4 people injured), the Desna training ground in Chernihiv region, and military facilities in Zhytomyr region. Later, a missile strike was launched against the town of Sarny in Rivne region (as a result, 4 people were killed and 7 wounded).

On the morning of June 26, a missile strike was launched against Kyiv. It damaged a residential building and a kindergarten in the center of the city, killing at least 1 person and injuring 6 civilians.

Also on June 26, Russian troops launched a missile attack on Cherkasy. As a result, a bridge over the Dnipro River was damaged; 1 person was killed and 5 people were injured. In the evening, there was a missile strike in the Odesa region; according to preliminary reports, 6 people (including 1 child) were injured.

In addition, the shelling of Sumy and Chernihiv regions from the border territory of the Russian Federation continued.

The State Service for Special Communications and Information Protection of Ukraine reported new cyberattacks from a discredited email address in the gov.ua domain. Emails allegedly containing instructions to missing servicemen’s relatives were sent from it, which in fact contained malware.

According to the UN Office of the High Commissioner for Human Rights, as of June 24, the number of civilian casualties in Ukraine since the start of the large-scale Russian invasion is 10,506 (4,677 killed and 5,829 wounded). As of the morning of June 26, over 952 children (339 children killed, 613 wounded) had been affected by the armed aggression of the Russian Federation in Ukraine.

Since the Russian invasion began, nearly one-third of Ukrainians have been forced to flee their homes. A large proportion of them have gone abroad. The UN High Commissioner for Refugees estimates that as of June 24, there were 5,256,378 refugees from Ukraine across Europe.

The National Police reported that since the start of the war, law enforcement agencies have received reports of more than 20,000 people (including 533 children) missing. So far, only about 10 thousand people (including 360 children) have been found. This information is preliminary; the number of missing people could be higher.

The humanitarian situation in the war zone remains very alarming and continues to deteriorate quickly. Civilians in Donetsk and Luhansk regions are experiencing problems with access to water, electricity, and medical services. Local residents are under constant shelling and there is no guarantee of safe evacuation from the area of active fighting. It is reported that 19 medical facilities in Sievierodonetsk and Lysychansk were damaged as a result of the fighting. This has led to a complete cessation of medical services in the former city. In the latter, there is only one functional medical facility left, which is trying to meet the growing needs of the population as the fighting approaches the city.

The International Atomic Energy Agency (IAEA) is concerned about the difficult conditions under which the personnel of the Zaporizhzhia Nuclear Power Plant (ZNPP) are working, given the temporary control of the site by Russian military forces. Russian troops are digging trenches and building fortifications on ZNPP territory, which indicates that the occupation troops are ready for combat operations on the territory of the nuclear facility, despite the risks of radioactive contamination. There is a danger that the Russian side will use control over ZNPP as a means of blackmailing Ukraine in case of a counterattack by the Ukrainian Armed Forces.

At the June 24 Cabinet of Ministers meeting, Prime Minister Denys Shmyhal stated that under the eRabota project announced last week, the state would provide grant aid of up to UAH 3.5 million for startups in the IT sector, and would also cover scholarships of up to UAH 30,000 for IT education.

European partners help Ukraine finance social and humanitarian expenses. On June 25, the Ukrainian Ministry of Finance announced that it had signed an agreement with the German Ministry of Finance to provide Ukraine with €1 billion in grant funding. The EU is also trying to support macrofinancial sustainability in Ukraine. In particular, following the June 24 summit, the European Council decided to provide Ukraine with up to €9 billion in macrofinancial assistance.

First Deputy Minister of Agrarian Policy and Food of Ukraine Taras Vysotskyi pointed out that Russia exported about 400 thousand tons of grain from Ukraine. Since the beginning of the full-scale invasion, direct losses for Ukrainian agriculture alone have already amounted to $4.3 billion. By exporting grain from Ukraine, the Kremlin is preparing for the coming global rise in food prices, creating reserves and opportunities for market speculation.

On June 23 during a meeting of the European Council it was decided to grant Ukraine the status of a candidate state for EU membership. The decision was based on a European Parliament resolution recommending granting such status to Ukraine, as well as a similar positive conclusion of the European Commission. Obtaining candidate status is the first official step on Ukraine’s path to EU membership. Before the beginning of the second stage – formal accession negotiations – Ukraine needs to introduce the necessary package of reforms in judiciary, anti-corruption, de-oligarchization, etc.

On June 26, the Group of Seven (G7) summit began in Germany. The first measure of the summit was a meeting between German Chancellor Olaf Scholz and US President Joe Biden. The politicians stressed the need to keep the West united against Russian aggressive policies. On the same day, British Prime Minister Boris Johnson and French President Emmanuel Macron had the opportunity to hold a discussion in which Johnson noted that any attempt to “appease” Russia would now lead to long-term instability and give Putin permission to permanently manipulate both sovereign nations and international markets. Johnson and Macron stressed the need to support Ukraine in its resistance to Russian aggression. According to the press, the G7 leaders plan to announce their commitment to indefinitely support Ukraine to defend it in the summit’s final statement.

Western partners are stepping up sanctions pressure on Russia. U.S. President Joe Biden announced a ban on imports of Russian gold. The British government informed that this decision would no longer allow new exports of Russian gold to Britain, Canada, the United States and Japan. Gold is an important component of Russian exports, bringing the Russian economy $15.4 billion in 2021.

The United Kingdom government has expanded trade sanctions against Russia. The new restrictive measures include a ban on exports to Russia concerning a number of goods and technologies, aviation fuel, sterling banknotes or EU currencies. The Senate of Canada has approved a law allowing frozen Russian assets to be confiscated and transferred to Ukraine. This is the first example of such a mechanism enshrined in legislation since the beginning of the Russian-Ukrainian conflict.

The International Working Group on Sanctions against Russia presented the Roadmap for Financial Sanctions. The document contains an analysis of the impact of previously imposed restrictions on the financial system of Russia, a list of recommendations to increase pressure on the aggressor state and a map of risks for the implementation of the sanctions policy.

The sanctions are gradually yielding results. On the night of June 27, Russia experienced a technical default as it is unable to service its foreign debt and make payments to foreign creditors due to the restrictions imposed.

On June 23, the U.S. Senate Foreign Relations Committee supported a resolution urging U.S. Secretary of State Anthony Blinken to recognize Russia as a sponsor of terrorism. Senators also voted in favor of a resolution condemning the use of starvation as a weapon of war and recognizing the impact of the Russia-Ukraine conflict on global food security. The European Council recognized Russia as the state that is solely responsible for the global food crisis. It called on Russia to immediately stop attacking agricultural facilities in Ukraine and to unblock Ukrainian Black Sea ports.

The transfer of military equipment to Ukraine by partner states is underway. The United States of America officially announced an additional $450 million in defense support for Ukraine. Thus, the transfer of additional weapons (including HIMARS systems), ammunition and other equipment will be ensured.

For its part, the Russian Federation is escalating its relations with the West. It is strengthening its military potential on the territory of the Republic of Belarus, which poses a direct threat to the countries on NATO’s eastern flank. Russia plans to deploy weapons in Belarus that can be used for a nuclear strike.