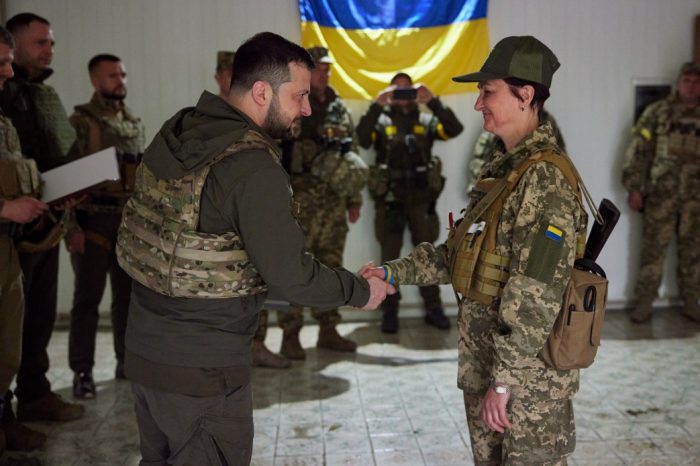 Russian troops continue their active offensive to seize the entire Luhansk region. They are attacking the city of Sievierodonetsk, while also trying to cut off the Ukrainian grouping that defends it. Attacks continue in the north of the Donetsk region and near the city of Donetsk. Meanwhile, the Armed Forces of Ukraine try to carry out a counteroffensive in the Kherson direction.

The Russian army keeps systematically shelling populated areas bordering the Russian Federation with mortars and artillery. The most intense attacks are directed at the territory of the Sumy region.

After the Ukrainian Armed Forces’ counterattack north of Kharkiv, the intensity of shelling in the city has decreased. However, the Russian military are trying to hold their positions in this direction and continue strikes against the regional center. On May 26, Kharkiv was shelled with large-caliber guns and MLRS. 9 people were killed in the city and 19 were injured.

Fighting for Sievierodonetsk is underway in the Luhansk region. The head of the city’s Civil-Military Administration, Oleksandr Striuk, reported that the Russian military occupied 2/3 of the city’s perimeter. According to the head of the Luhansk Regional Military Administration, Sievierodonetsk is still not blocked off. It is worth noting that in recent days, active hostilities have been taking place around the Bakhmut-Lysychansk highway. On May 27-28, Russian troops moved closer to the route and had the opportunity to shell this key line, making it difficult to provide supplies to Ukrainian Armed Forces units and humanitarian aid convoys. On May 29, Serhii Haidai, the head of the Luhansk Regional Military Administration, informed that by reinforcing Ukrainian Armed Forces in the area, it was possible to push the Russian troops back from the highway.

In the north of the Donetsk region, Russian troops captured the town of Lyman. Ukrainian units withdrew to new positions in an organized manner. There is an offensive by Russian military in the direction of Bakhmut in order to disrupt logistical support routes of the Armed Forces of Ukraine in Sievierodonetsk. Fighting continues in the Avdiivka area, where Russian troops are actively using artillery and aviation to strike populated areas. In total, at least 14 civilians were killed and more than 12 people were wounded in the region between 26 and 29 May.

On the front line in Zaporizhzhia region, shelling of civilian infrastructure continues.

Russian forces continue to strike military targets in central Ukraine. On May 27, an Iskander-type missile hit the National Guard barracks in Dnipropetrovsk region. According to Hennadii Korban, head of the Territorial Defense Forces in Dnipropetrovsk, 10 people were killed and about 35 were wounded as a result of the strike. On May 28, a missile strike was launched against Kryvyi Rih. Two rockets destroyed an industrial enterprise in the city. Despite the missile strikes, the Ukrainian Armed Forces are conducting successful counterattacks south of Kryvyi Rih.

Units of the Ukrainian Armed Forces launched an offensive in the Kherson direction. According to the General Staff of the Armed Forces of Ukraine, they forced the Russian troops to retreat in some parts of the front.

Shelling of settlements near the front line continues, including residential areas in Mykolaiv and other towns in the region. Also on the night of May 30, Russian troops carried out two missile strikes on a bridge over the Dniester estuary in Odesa region, which had previously been damaged by attacks.

According to the Office of the UN High Commissioner for Human Rights, as of May 27, the number of civilian casualties in Ukraine since the beginning of the large-scale Russian invasion is 8,766 (4,031 killed and 4,735 wounded). As of the morning of May 29, more than 682 children (242 children killed, 440 wounded) suffered as a result of the armed aggression of the Russian Federation in Ukraine.

Due to active hostilities in some regions of Ukraine, humanitarian conditions are deteriorating. In the east and south of Ukraine, there are large-scale interruptions of electricity, water, and gas supplies. The southern and eastern regions have the highest percentage of food insecure households.

The humanitarian situation in temporarily occupied Mariupol remains critical, particularly due to the lack of a stable energy, water and gas supply. The city is on the verge of an environmental disaster and an outbreak of infectious diseases.

The situation in Sievierodonetsk, around which active hostilities are taking place, is critical. As of May 20, there were about 15,000 civilians in the city. A report of the UN Office for the Coordination of Humanitarian Affairs reports that the city hospital has been subjected to repeated attacks and, as a result, can provide only limited medical services — at a time when demand is growing due to constant shelling. Humanitarian aid to the city and the evacuation of civilians has been hampered by the destruction of an important bridge that was used for transportation.

The human rights situation in the temporarily occupied territories of Ukraine remains precarious. Information about the conditions of stay and observance of the rights of Ukrainian civilians deported to Russia remains scarce. Over the past week, the Russian military forcibly transported almost 3,000 residents of Mariupol, including more than 300 children, to a filtration camp. After the filtration measures, they plan to deport them to the Russian Federation.

Between February 24 and May 29, the WHO documented 263 attacks on Ukrainian healthcare system facilities (including attacks against medical facilities, transportation, personnel, patients, and storage facilities). As a result, 59 people were injured and 75 were killed. The problem is particularly acute in Luhansk, Chernihiv, Kherson, and Donetsk regions.

Ukrainian educational institutions also continue to suffer devastation as a result of hostilities. In the regions affected by the conflict, access to online education is complicated.

Ukrainian servicemen released from Russian captivity report torture and cruel treatment by the Russian Armed Forces (in particular, beating, the use of electric current and unknown substances against them, lack of first aid, etc.).

On May 29, several dozen residents of temporarily occupied Melitopol, Zaporizhzhia region, came out for a pro-Ukrainian rally.

According to Presidential Advisor Oleh Ustenko, Ukraine has sufficient grain reserves to meet domestic and global demand by the end of 2022, provided all military activities in the Black Sea cease.

The U.S. is helping to restore the economic potential of Ukraine’s steel industry. On May 27, the press service of the White House informed that Joe Biden signed an executive order cancelling for a year the additional duties of 25% imposed by the previous administration on imports of Ukrainian steel.

According to the Ukrainian Ministry of Economy, among the enterprises that took part in the relocation program, 601 institutions have already completed the move, 390 of them have already resumed work on the new sites in the western regions of the state.

The Ministry of Economy is trying to improve macrofinancial stability in Ukraine by attracting additional amounts of foreign exchange earnings. In particular, following a meeting with UK Secretary of State for International Trade Anne-Marie Trevelyan, Minister of Economy Yuliia Svyrydenko expects that the zero customs duty on exports of Ukrainian goods to the UK will start at the beginning of June.

Ukrainian officials continue to maintain an active political and diplomatic dialogue with partners to strengthen international support for Ukraine. President Volodymyr Zelenskyi had telephone conversations with British Prime Minister Boris Johnson, Italian Prime Minister Mario Draghi and Dutch Prime Minister Mark Rutte. The president briefed his interlocutors on the situation on the front. They discussed the strengthening of defense support, fuel supplies, prevention of the international food crisis and Ukraine’s membership in the EU.

On 26 May, Prime Minister of the Republic of Finland Sanna Marin paid an official visit to Kyiv. Ukrainian President Volodymyr Zelenskyi met her and thanked the Finnish government and people for the sanctions against Russia, as well as for defense, financial and humanitarian aid. The sides discussed key aspects of Ukraine’s future membership in the EU, comprehensive work on Ukraine’s reconstruction and the sanctions policy against Russia. Moreover, Sanna Marin met with Ukrainian Prime Minister Denys Shmyhal. The parties signed an agreement on Finland’s financial support for education reform in Ukraine.

Ukraine keeps receiving military support from Western partners. Poland transferred 18 Krab self-propelled artillery units to the Armed Forces and trained 100 Ukrainian artillerymen to operate the equipment. Negotiations are ongoing considering deliveries of U.S. MLRS to Ukraine. According to The Wall Street Journal and The New York Times, agreements have been reached on this issue, and the weapons will be included in the next military aid package.

Direct financial assistance to partners also continues to flow in. Germany has announced a €1 billion grant aid to Ukraine.

The population in Ukraine’s partner countries is joining in the fund-raising for the Ukrainian Armed Forces. Lithuania managed to raise €5 million for three days, which will be used to buy Bayraktar TB2 UAV.

Ukraine launched the communication campaign “Embrace Ukraine. Strengthen the Union” aimed at providing support for the process of European integration — in particular, obtaining candidate status for EU membership. The Cabinet of Ministers of Ukraine supported draft amendments to the Customs Code, which is necessary for the application of the computerized transit system NCTS on the way to “customs-free visa” with the EU.

Ukrainian President Volodymyr Zelenskyi left the Kyiv region for the first time since the beginning of the Russian large-scale invasion and made a working trip to Kharkiv. Zelenskyi held meetings with the leadership of the city and the Kharkiv region, where he heard reports on the situation in the region, where active hostilities are ongoing. He also dismissed the head of the Security Service of Ukraine in Kharkiv region for negligent performance of official duties.

Amid growing criticism from believers who condemn the Moscow Patriarchate’s support of Russian aggression against Ukraine, the Ukrainian Orthodox Church of the Moscow Patriarchate held a Council in which it expressed disagreement with the position of Patriarch Kirill of the Russian Orthodox Church. The Council’s decision emphasizes the independence of the church operating in Ukraine. But in practice this does not mean a change in its status in relation to Moscow. In this way, it seeks to appease the public and stop the intensification of the transition of its own parishes to the Orthodox Church of Ukraine.

The Ukrainian music band Kalush Orchestra auctioned off the trophy it won at Eurovision 2022. As a result, the musicians were able to raise $900,000, which will be used to buy UAVs for the Ukrainian Armed Forces.