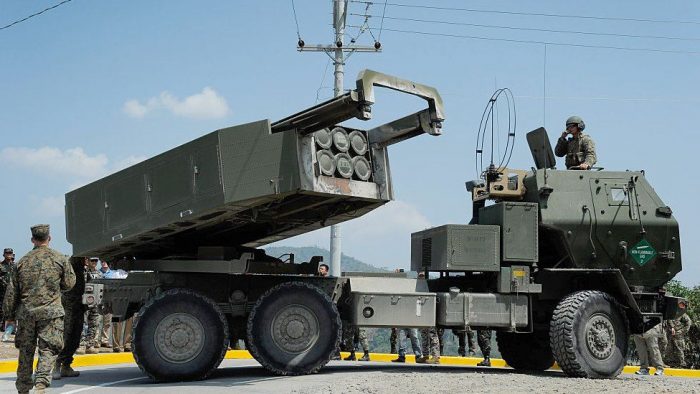 Russian troops continue their offensive to establish control over the territory of Luhansk region. They have captured most of the city of Sievierodonetsk. At the same time, the Armed Forces of Ukraine carry on a counteroffensive in northern Kherson region, succeeding at the tactical level. The Russian Federation continues to use missile strikes against infrastructure facilities in Ukraine in order to cause economic damage and delay military aid from Western countries.

Russian troops continue shelling the border areas of the Sumy region from their territory. The use of Russian aviation was recorded in this area. Also, with a lower intensity, strikes are carried out on the territory of Chernihiv region.

Despite a decrease in the intensity of shelling, Russian forces keep launching artillery strikes against Kharkiv. They are also shelling populated areas in the region near the front line, where fighting with the Armed Forces of the Ukraine is ongoing.

In Luhansk region, Russian troops continue their offensive to reach the administrative borders of the region. Their units have entered Sievierodonetsk and are consolidating in the center of the city. Street battles continue there. The shelling of Sievierodonetsk resulted in damage to a cistern with nitric acid, which poses an additional threat to the health of people in the combat zone.

In the northeastern Donetsk region, Russian forces are concentrating their efforts on an offensive in the direction of the Bakhmut-Lysychansk highway to encircle the Ukrainian Armed Forces group defending in the Luhansk region. They have also resumed their offensive in the Lyman area; fighting continues in the Avdiivka area near Donetsk.

Russian forces are shelling civilian infrastructure in Donbas. For example, on the night of May 31, a strike was launched against Sloviansk. A total of 11 civilians were killed and 20 injured in the region between May 30 and June 1.

Russian troops stepped up their activity on the front line in Zaporizhzhia region. They intensified shelling in the Huliaipole area in the east of the region. According to Zaporizhzhia Regional Military Administration, they are trying to advance in this direction.

Russian troops reinforced their positions on the temporarily occupied Zmiinyi Island. The Ukrainian military believes that the deployment of anti-aircraft systems, MLRS and electronic warfare equipment there is aimed at enhancing the protection of the Russian fleet’s naval grouping, carrying out a blockade of Odesa.

The Russian military continues shelling Mykolaiv. Also, the town of Ochakiv in the Mykolaiv region was shelled from MLRS.

The Armed Forces of Ukraine continue their counterattack in the northwestern part of the Kherson region. The General Staff of the Armed Forces of Ukraine and the head of the Kherson Regional Military Administration Hennadii Lahuta report the liberation of certain settlements from the Russian occupation. The Russian military is trying to stop the advance of Ukrainian units. The head of the civil-military administration of Kryvyi Rih, Oleksandr Vilkul, reported that they are urged to reinforce their defenses in this direction. In order to slow down a possible advance by the Ukrainian Armed Forces, the Russian forces are mining the banks of the Inhulets River and have blown up bridges across it.

Russian forces continue to attempt to destroy the system of transport communications used to deliver aid to Ukraine from its partners. On the evening of June 1, a missile strike was launched against a transport infrastructure facility in the Stryi district of the Lviv region. The target of the strike was probably the Beskydy Tunnel, an important link in the railroad connection between Ukraine and EU states. Ukrzaliznytsia (Ukrainian Railways) denies information about damage to the facility.

The General Staff of the Armed Forces of Ukraine reports that Russian troops have blocked access of the local population to Ukrainian mobile operators and the Internet in almost all the temporarily occupied territories. The goal is to limit people’s access to information and separate the temporarily occupied regions from the Ukrainian information space.

According to the Office of the UN High Commissioner for Human Rights, as of June 1, the number of civilian casualties in Ukraine since the beginning of the large-scale Russian invasion is 9,094 (4,149 killed and 4,945 wounded). As of the morning of June 1, more than 689 children (243 children killed, 446 wounded) were affected by the armed aggression of the Russian Federation in Ukraine.

Presidential Commissioner for Children’s Rights and Children’s Rehabilitation Daria Herasymchuk reported that as of June 1, more than 234,000 children had been forcibly transferred to the temporarily occupied territories, to the Russian Federation, or to the Republic of Belarus. In order to legitimize the deportations, the Russian Federation signed a law on simplified citizenship for Ukrainian orphans. Such a policy is used by Russia to assimilate kidnapped children and further exploit them.

Active hostilities in the Donetsk region have led to the destruction of homes, infrastructure, and sports and cultural facilities. The Bakhmut-Lysychansk highway, which is a key transportation route to Ukrainian government-controlled territories in Luhansk region and is used to evacuate people and deliver humanitarian goods, is under constant shelling. On May 30, French journalist Frederic Leclerc-Imhoff was killed while attempting to evacuate civilians in Luhansk region. He was in a transport that was supposed to pick up people, but was hit by Russian military fire.

The humanitarian situation in Mariupol remains catastrophic. There are still about 100 thousand people in the city. According to the mayor of the city, Vadym Boichenko, more than 22 thousand of its residents were killed during the war. There is no access to drinking water or food in Mariupol. According to the mayor, the number of burials in the temporarily occupied city is increasing. Rising temperatures and heavy rains actualize the threat of the spread of infectious diseases.

The humanitarian situation near the front line in other regions remains challenging. In the south of Mykolaiv region, settlements were left without gas supply and partially without electricity. In total, since the beginning of large-scale Russian aggression in the region, more than 4,000 civilian objects have been partially damaged or completely destroyed.

Petro Kotin, President of Enerhoatom, stated that about 500 Russian servicemen are currently at the Zaporizhzhia nuclear power plant, as well as a large amount of equipment and explosives. They use the plant as their military base, because it is a well fortified facility that has a surveillance system, fencing, and special rooms to hide personnel. Also, the presence of large quantities of nuclear materials at the plant protects them from attack by the Ukrainian Armed Forces. The entire staff of the plant is forced to work under great pressure.

On the morning of May 30, there was an explosion in the center of temporarily occupied Melitopol near the building where the occupation administration is located. The possible target of the attack was Yevhen Balytskyi, a former MP of Ukraine, who had been appointed by the Russian military as the so-called governor of Zaporizhzhia region.

According to the Ukrainian Ministry of Finance, the military budget makes up three-quarters of Ukraine’s entire budget, and tax revenues cover only one-third of budget expenditures. Every month, Ukraine requires about €5 billion to support basic payments, such as salaries and pensions.

The National Nuclear Energy Generating Company Enerhoatom received a UAH 1.5 billion loan from Ukrgasbank. These funds will be used to purchase American nuclear fuel. Thus, it will be possible to ensure operation of the Ukrainian nuclear power plants in conditions of refusal from Russian fuel.

On May 31, the EU summit decided to grant Ukraine an urgent loan of €9 billion to pay off urgent budget needs.

In the four months of the year, $4.07 billion were transferred to Ukraine from abroad, or 10% less than in the corresponding period last year. For 2021, migrant workers transferred $15 billion to Ukraine.

Ukrainian President Volodymyr Zelenskyi held a meeting with the President of the Slovak Republic Zuzana Čaputová, who visited the capital of Ukraine. Also the President of Ukraine received in Kyiv the Minister for Europe and Foreign Affairs of France, Catherine Colonna, who became the first French official of the highest rank to visit Ukraine since the beginning of the Russian invasion. The key topics of the politicians’ meeting were defense and economic assistance to Ukraine, support for our state’s EU candidate status, and the strengthening of sanctions against Russia.

The government of Ukraine and the government of the Republic of Poland held intergovernmental consultations in Kyiv for the first time, during which eight documents on cooperation in the fields of energy, defense, cross-border and customs cooperation, environmental policy, reconstruction of Ukraine, as well as cooperation in the issue of national memory were adopted. It emphasizes a new effective level of relations, which Ukraine and Poland have built during the last three months and are planning to develop further.

Also representatives of the Ukrainian authorities are making efforts to constantly establish a diplomatic dialogue with partners. President Volodymyr Zelenskyi had a telephone conversation with Turkish President Recep Tayyip Erdogan. The sides discussed threats to food security caused by Russia’s actions, ways to unblock Ukrainian ports and security cooperation. Ukrainian Foreign Minister Dmytro Kuleba held a conversation with Australian Foreign Minister Penny Wong, during which he urged Australia to strengthen military support and offered to include Ukraine in the Australian system of tariff preferences.

The European Council continues to discuss the sixth package of sanctions against Russia, which includes an embargo on most imports of Russian oil (a temporary exception applies to oil delivered to Europe by pipeline); cutting off Russia’s Sberbank from the international payment system SWIFT and banning three more Russian state broadcasters on EU territory. Hungary, which blocked the embargo decision, received guarantees from EU leaders that it could get a replacement in case it refused to export oil through pipelines in the future. However, Hungary continues to stall the final agreement on sanctions, demanding that Patriarch Kirill of the Russian Orthodox Church be removed from the list.

At the spring session of the NATO Parliamentary Assembly, which lasted from May 27 to 30, more than 200 lawmakers from about 30 countries of the alliance unanimously approved the Standing with Ukraine Declaration. The document includes a demand to support Ukraine on the path to Euro-Atlantic integration, increase supplies of heavy weapons, strengthen intelligence sharing and impose additional sanctions against Russia. In addition, the document also implies to clearly identify revisionism and aggressive actions of Russia as the main threat to Euro-Atlantic security in the updated NATO Strategic Concept and to strengthen the eastern flank of the North Atlantic Alliance.

The US Department of Defense announced the approval of a new — the 11th one — assistance package for Ukraine, which will include additional modern weapons, such as the HIMARS multiple rocket launchers and ammunition; counter-battery radars and air surveillance radars. In addition, the US is allocating Mi-17 helicopters; Javelin anti-tank missiles and other anti-tank weapons; 155 mm artillery shells. The new U.S. defense assistance package will arm Ukraine with advanced weapons to defend its territory against Russian offensives.

British Defense Minister Ben Wallace announced that the state is ready to provide Ukraine with M270 MLRS. The move is being made in coordination with the United States, which has also agreed to supply such weapons.

German Federal Chancellor Olaf Scholz stated that Germany will supply Ukraine with a modern IRIS-T type air defense system, a modern target detection radar and will consider supplying multiple rocket launchers in cooperation with the United States. In addition, according to Olaf Scholz, Germany will supply Greece with infantry fighting vehicles of its own production (IFV Marder), and Greece will transfer to Ukraine equipment of the Soviet model (BMP-1), which used to be in service of the GDR army.