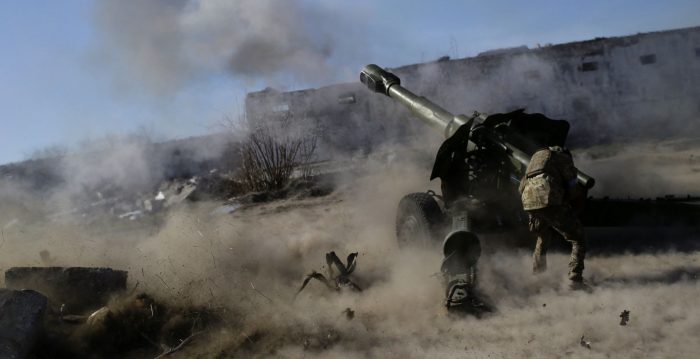 Russian troops are actively shelling Ukrainian positions while carrying out an offensive in the east of Ukraine. Ground assault actions continue in a limited format after preliminary intensive preparation by artillery and air strikes.

The State Border Guard Service of Ukraine and the General Staff of the Armed Forces of Ukraine reported that the Russian military shelled Ukrainian border territories in the Sumy region. They used mortars and helicopters armed with unguided rockets.

Russian troops are trying to gain a foothold in positions near Kharkiv. The Armed Forces of Ukraine continue their active defense. The Ukrainian military liberated the village of Ruska Lozova, which is a strategically important point on the Kharkiv-Belgorod highway. From this village, Russian troops shelled residential and civilian infrastructure in Kharkiv.

Active hostilities continue near Izium. The General Staff of the Armed Forces of Ukraine reported that Russian troops are bringing in additional crossings over the Siverskyi Donets River to reinforce their forces in this direction.

Shelling of Kharkiv continues. On April 29, the head of the Kharkiv Regional Military Administration Oleh Syniehubov reported that 5 civilians were killed and 11 were wounded in the region over the past 24 hours. During the day, according to the Kharkiv Regional Military Administration 1 person was killed in the region, 5 people were wounded.

In Luhansk region, Russian troops are trying to establish control over Rubizhne and Popasna and are preparing for an offensive on Sievierodonetsk. According to the head of the Luhansk Regional Military Administration, Serhii Haidai, shelling of populated areas located in close proximity to the front line is ongoing. Among the affected are 2 employees of the State Emergency Service, who were injured.

On the territory of the Donetsk region, an offensive by Russian troops continues in the direction of Kurakhove (to the south) and Lyman (to the north). The Ukrainian military preemptively blew up a railroad bridge over the Siverskyi Donets in the Lyman-Raihorodok section in order to complicate conditions for the Russian offensive.

Air strikes on Mariupol continue. The General Staff of the Armed Forces of Ukraine recorded a movement of Russian units from that city to other sections of the front.

According to the Donetsk Regional Military Administration, at least 2 civilians were killed and 4 were wounded in the region during April 29.

Ivan Arefiev, a representative of the Zaporizhzhia Regional Military Administration, revealed that the Russians are trying to advance and push deep into the Zaporizhzhia region. According to the General Staff of the Armed Forces of Ukraine, artillery shelling of Ukrainian positions continues unabated.

Russian troops shelled populated areas on the border of Kherson and Dnipropetrovsk regions in the Kryvyi Rih direction with MLRS.

The Office of the UN High Commissioner for Human Rights recorded 6134 civilian casualties in Ukraine as of April 28, 2022 (2899 dead and 3235 wounded). Juvenile prosecutors inform that more than 617 children (219 children killed, 398 injured) suffered as a result of the large-scale invasion by the Russian Federation.

The Institute of Mass Information recorded 243 crimes by the Russian military against journalists in Ukraine. It is known that 7 journalists were killed, 15 went missing, and 14 were killed as combatants. Among the latest victims of the war is Vira Hyrych, a journalist and producer for the Ukrainian bureau of Radio Liberty, who was killed in a Russian strike in Kyiv on the evening of April 28.

The Office of the Prosecutor General began an investigation into the kidnapping of two British volunteers by the Russian military in the Zaporizhzhia region.

The head of the investigation department of the National Police in Kharkiv Region, Serhii Bolvinov, spoke about the crimes committed by the Russian military in the temporarily occupied territories of the region. Among other things, he reported the brutal torture and shooting of a Ukrainian medic, who had previously participated in the Anti-Terrorist Operation (ATO).

According to President Volodymyr Zelenskyi, law enforcers discovered another mass grave of civilians on the territory of Kyiv region, which was under Russian occupation in March.

Advisor to the mayor of Mariupol Petro Andriushchenko reports increased filtration measures in the temporarily occupied areas of the city. Most of the male population from the outskirts of Mariupol has been in filtration camps for more than a week.

The Azov Regiment press service informed that more than 500 wounded and doctors were trapped under the rubble of a field hospital in Mariupol due to airstrikes on the Azovstal plant. One soldier was killed, and hundreds of wounded received contusions. The commander of the 36th Marine Brigade declared a humanitarian disaster in the Azovstal bunkers.

Rafael Grossi, Director General of the IAEA, returned from Ukraine and spoke about the situation with nuclear facilities in the war zone. He stated that a missile flight over the South Ukraine nuclear power plant that was recorded on April 16 threatened the “physical integrity” of the plant, which could have led to a nuclear accident.

Minister of Healthcare Viktor Liashko indicated that as a result of hostilities on the territory of Ukraine 39 medical institutions were completely destroyed and 369 were damaged.

Ombudsman Liudmyla Denisova informed about 700 cases of forced blood donation among university students in the temporarily occupied territories of Donetsk and Luhansk regions for transferring to the wounded Russian military.

Ukraine’s largest bank by asset size, PrivatBank, moved its data center to the European Union, fearing the threat of physical destruction of the bank’s data centers in Kyiv and Dnipro.

The Ministry of Finance of Ukraine announced that Ukraine received grant financing in the amount of 88.5 million euros. The funds were provided from the World Bank’s Donor Trust Fund within the framework of the Second Economic Recovery Development Policy Loan Program for Ukraine.

The Verkhovna Rada refused from the preliminary initiative to return the excise tax on fuel and 20% of the value added tax. In turn, the Cabinet of Ministers raised the trade markup on diesel fuel and gasoline by 40% to prevent shortages at gas stations.

Prime Minister Denys Shmyhal announced the government’s decision not to raise the price of gas for households and businesses that perform vital functions to ensure the defense of the state.

The search for ways to export Ukrainian products under the Russian sea blockade continues. In the Romanian Black Sea port of Constanta on April 28, the vessel Unity N completed the loading of 71,000 tons of Ukrainian corn — for the first time since the start of the war.

Norway announced its decision to close its borders and ports to Russian trucks and ships starting May 7, joining EU sanctions over the Russian Federation’s full-scale invasion of Ukraine. An exception will be made for fishing vessels, which account for up to 60 percent of Russian traffic to Norwegian ports. Also the restrictions will not apply to the island of Spitsbergen, the status of which is regulated by a separate treaty.

Poland handed over to Ukraine more than 200 T-72 tanks and several dozen infantry fighting vehicles. At the same time, the US Department of Defense reported that the US Air Force is already in the process of loading ammunition for 155 mm howitzers that are headed to Ukraine. A Spanish ship with military cargo intended for Ukraine has also arrived in Poland.

The German federal government is considering supplying Panzerhaubitzen 2000 howitzers from the Bundeswehr to Ukraine.

British Foreign Secretary Liz Truss, during her visit to The Hague to meet the president of the International Criminal Court, made it known that Britain would send experts to Ukraine in order to investigate war crimes.

White House Press secretary Jen Psaki stated that the US President had publicly expressed his opposition to Vladimir Putin’s participation in the next G20 summit, which will be held in Indonesia in November 2022.

British Ambassador to Ukraine Melinda Simmons returned to Kyiv. Also, the embassies of the Republic of Azerbaijan and the Netherlands resumed their work in the Ukrainian capital.