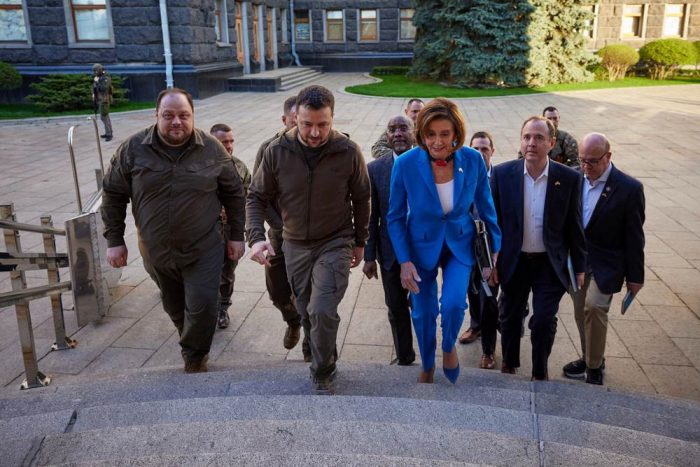 Russian troops continue their offensive in Donetsk, Luhansk and Kharkiv regions. They failed to break through the defense of Ukrainian units and enter the operational space. The Armed Forces of Ukraine liberated several populated areas near Kharkiv.

The Russian military is getting more active in the south, concentrating forces in the Kryvyi Rih direction and launching strikes against the infrastructure of Odesa. The threat of Russian aggression extending into Moldovan territory as a result of destabilization of Transnistria persists.

Russian troops continue shelling Ukraine’s border areas from their territory. In particular, the Ukrainian checkpoint at the state border in Chernihiv region was shelled once again.

As a result of the counterattack, the Armed Forces of Ukraine managed to retake four settlements near Kharkiv. This led to a decrease in the intensity of artillery shelling of the city. Nevertheless, as a result of the May 1 bombardment in the region, 3 people were killed and 8 were wounded.

The Russian Federation continues its offensive from the area of Izium (Kharkiv region), attempting to reach the rear of the Armed Forces of Ukraine grouping in the area of the Joint Forces Operation.

In Luhansk region, Russian troops are actively fighting along the entire front line in order to seize Ukrainian defense positions in Rubizhne and Popasna and further develop an offensive on Sievierodonetsk. The shelling is causing significant damage to housing. The evacuation of civilians from settlements near the zone of active hostilities continues. The head of the Luhansk Regional Military Administration, Serhii Haidai, urges the population to leave the region without delay.

Incidents at military and infrastructure facilities in the border regions of the Russian Federation continue. On May 1, a fire at a munitions depot near Belgorod was recorded. Additionally, a railway bridge in the Kursk region was destroyed.

In the Donetsk region, Russian troops continue to attack in order to encircle Ukrainian units in the Joint Forces Operation zone. The General Staff of the Armed Forces of Ukraine reports intense shelling of Ukrainian positions near Lyman in the north of the region, where Russian troops are preparing for an offensive on Sloviansk. Air strikes on the city of Mariupol continue.

The shelling in Donetsk region during April 30-May 1 resulted in 4 civilian deaths and 20 injuries (including 4 children).

As a result of shelling in Zaporizhzhia region on May 1, 2 civilians were killed and 4 were wounded.

Russian forces continue to strike strategic enterprises in an attempt to create a shortage of vital resources in Ukraine. In particular, the Dnipropetrovsk Regional Military Administration informed that Russian missiles struck the grain warehouses of an agricultural enterprise on May 1.

The General Staff of the Armed Forces of Ukraine revealed that Russian troops are fighting to gain a foothold on the administrative borders of the Kherson region and create favorable conditions for an offensive on Mykolaiv and Kryvyi Rih. The main Russian efforts are concentrated in the Kryvyi Rih direction.

On April 30, a missile strike was launched against the Odesa airport. The runway at the site was damaged. The strike occurred against the backdrop of a statement by the speaker of the Odesa Regional Military Administration about receiving new air defense systems.

According to the State Service for Special Communication and Information Protection of Ukraine, on May 1, Russian occupation troops disconnected Kherson and Zaporizhzhia regions from Ukrainian cell phone and Internet providers, indicating Russia’s attempt to monopolize sources from which the population receives information in the temporarily occupied territories.

“Ukrzaliznytsia” reported hacker attacks on its own online services on May 1.

The Office of the UN High Commissioner for Refugees reported that as of April 29, 5,468,629 people had fled Ukraine as a result of Russian aggression.

The Office of the Prosecutor General informed that as of May 1, more than 623 children were injured in the armed aggression of the Russian Federation in Ukraine (219 were killed and at least 404 were injured).

As a result of another exchange of prisoners on April 30, 7 Ukrainian servicemen and 7 civilians were released.

The Ombudsman’s Office recorded the forced deportation of residents of the Kharkiv region to the Russian Federation.

Data on Russia’s violation of international standards for the treatment of prisoners of war continue to be reported. Ombudsman Liudmyla Denisova revealed the brutal torture and killing of Ukrainian prisoners of war in Russia.

Thus, one of the men was brutally killed after torture, after which they sent photos of his body to his mother. Volodymyr Khropun, a Red Cross volunteer, said that in the Kyiv region the Russian military kept Ukrainian prisoners of war in the basement of a factory, where they were beaten and tortured. In Kherson region, Nazar Kahalniak, the Anti-Terrorist Operation veteran, died from torture by Russian soldiers. Police in Kyiv region reported that the bodies of 3 men tortured by the Russian military were found in the liberated territories on April 29. A total of 1,202 bodies of civilians killed during the occupation of the territory by the Russian armed forces have been examined by investigators in the region as of the morning of April 30.

The evacuation of civilians from the Azovstal plant in Mariupol has begun. On April 30, Deputy Commander of the Azov Regiment Sviatoslav Palamar reported that 20 civilians had been released from under the rubble of the plant and handed over for evacuation to Ukrainian-controlled territory. On May 1, a large-scale operation to evacuate people from the war zone was announced. It is being conducted with the participation of the International Committee of the Red Cross. Ukrainian President Volodymyr Zelenskyi announced the start of the evacuation of the first group of approximately 100 people who have been sent to Zaporizhzhia.

At the same time, Russian military forces disrupted the evacuation of people from the city of Popasna in Luhansk region. According to the head of the Regional Military Administration, Serhii Haidai, two buses that were transporting civilians out of the city came under fire from Russian troops during the evacuation; communication with the bus drivers has now been lost.

Abductions of civilians by the Russian military continue. During the active phase of the Russian-Ukrainian conflict, 213 kidnappings were recorded in Zaporizhzhia region. At the same time, 88 people continue to be held hostage. A similar situation takes place in the Kherson region. The Kakhovka town territorial community reported the kidnapping of school principal Viktor Pendalchuk. It also became known about the abduction of a deputy of Nova Kakhovka town council Ihor Protokovyl by the Russian military.

The Zaporizhzhia Regional Military Administration provided information about 594 households that have been destroyed or partially damaged in the region as a result of Russian shelling since the start of the large-scale invasion. There are 37,313 subscribers in 85 settlements in Zaporizhzhia region without power supply.

The Main Directorate of Intelligence of the Ministry of Defense of Ukraine reports a complete lack of access to basic medical services for the population in the territories occupied by Russian troops (in particular, Luhansk, Kharkiv, Zaporizhzhia, and Kherson regions).

The Ministry of Infrastructure of Ukraine issued an order to close 4 sea trade ports —Mariupol, Berdiansk, Kherson and Skadovsk — in connection with the occupation of these cities by Russian troops. The ports will be closed until Ukraine regains control over these territories.

According to First Deputy Minister of Agrarian Policy and Food Taras Vysotskyi, the Russian military has already exported several hundred thousand tons of grain worth hundreds of millions of US dollars from the temporarily occupied territories in Luhansk, Donetsk, Kherson and Zaporizhzhia regions.

Broad diplomatic and practical support for key international strategic partners continues to be provided to Ukraine. On April 30, a delegation of the United States Congress led by the Speaker of the House of Representatives Nancy Pelosi arrived in Kyiv. She met with President of Ukraine Volodymyr Zelenskyi. During the talks, the parties discussed macro-financial assistance, sanctions policy, and political cooperation between Ukraine and the United States.

The President of Ukraine continues to inform international leaders about the situation in Ukraine. On April 30, Volodymyr Zelenskyi had a telephone conversation with the Prime Minister of the United Kingdom Boris Johnson. The parties discussed the situation at the front, in particular in Mariupol. The British Prime Minister noted that London will continue to provide military and humanitarian aid to Kyiv. On the same day, Volodymyr Zelenskyi talked with the President of Switzerland Ignazio Cassis, noting the preparations for the Conference on the Reconstruction of Ukraine, which will be held in the Swiss city of Lugano on July 4-5. The Presidents of Ukraine and France also had another conversation on issues of defense cooperation and cooperation on the path to Ukraine’s European integration.

There is a growing consensus among the countries of the international democratic community to strengthen sanctions against Russia. Ukrainian Foreign Minister Dmytro Kuleba discussed the next round of EU sanctions with EU High Representative Josep Borrell, and held talks with US Secretary of State Anthony Blinken on imposing further restrictions on Russia. In addition, Germany supported the idea of ​​imposing sanctions on imports of uranium from Russia and other products of Russia’s nuclear industry in response to the Russian invasion of Ukraine.

A growing number of countries are getting involved in providing Ukraine with weapons. Denmark is preparing to transfer Piranha III armored personnel carriers and M10 heavy mortars to Ukraine.

Japanese Prime Minister Fumio Kishida and Vietnamese Prime Minister Pham Minh Chin condemned the attacks on civilians in Ukraine and Russian threats to use weapons of mass destruction. The officials called for the importance of an immediate ceasefire in Ukraine.