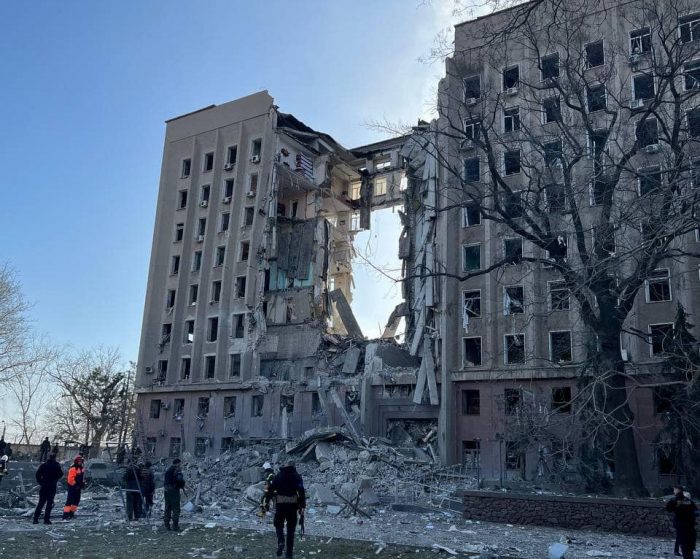 Russian troops are intensifying the scale of missile attacks on Ukrainian territory. They are purposefully destroying facilities where strategic stockpiles (oil depots and food stores) are located.

On the northern direction, Russian forces are switching to defensive tactics, ceasing active offensive operations. Russian Armed Forces units continue to be withdrawn for rotation. According to some indications, Russian Armed Forces are regrouping their units to concentrate their main efforts in the direction of eastern Ukraine. Russian troops are mining the approaches to their positions and reinforcing checkpoints.

On March 29, a warehouse building caught fire in the Brovary district of the Kyiv region. The State Emergency Service reported that it was able to localize it on an area of 20,000 square meters.

Russian troops launched a rocket attack on Korosten district of Zhytomyr region. As a result of the strike, a fire broke out at one of the local enterprises.

Russian troops continue intensive attacks on the Sievierodonetsk-Lysychansk-Rubizhne agglomeration in the Luhansk region. At the same time, they are concentrating efforts to seize the town of Izium in Kharkiv region, thus creating a threat to the flank of Ukrainian forces in the area of the Joint Forces Operation.

The State Emergency Service reports that in Sievierodonetsk, Rubizhne, Lysychansk and Novotoshkivsky, Popasna, Kreminna, Zolote, Shchedryshcheve and the village of Nyzhne in the Luhansk region, numerous fires broke out as a result of the shelling. The number of dead and wounded among civilians is being clarified.

In the evening of March 29, an ammunition depot exploded near the village of Krasny Oktyabr in the Belgorod region of the Russian Federation (20 km from the border with Ukraine). As a result of the explosion, 4 Russian servicemen were injured.

According to Donetsk Regional Military Administration, two people were injured during the Russian shelling in Kurdyumivka and Novoselivka during the day.

Russian troops carried out artillery shelling of Ukrainian military positions near Stepnohirsk and Huliaipole in the Zaporizhzhia region.

On the morning of March 29, it became known that missile strikes were launched in the Dnipropetrovsk region. Following the missile attacks, the road surface of a viaduct in Pavlohrad was damaged, resulting in the interruption of traffic. The missile hit the territory of a farming enterprise in Novomoskovsk district. As a result, 1 person was injured.

Russian forces are concentrating their efforts on rocket and artillery fire. Thus, the Russian Federation is trying to restrain the actions of Ukrainian Armed Forces units.

On the morning of March 29, Russian forces shelled the regional administration building in Mykolaiv. Twelve people were killed as a result of the rocket attack, according to the State Emergency Service. Vitalii Kim, head of the Mykolaiv Regional Administration, said 34 more people were wounded.

According to the Ministry of Foreign Affairs of Ukraine, Russia has intensified illegal activities in the Black Sea since February 24, in particular through the use of drifting sea mines. The related munitions were seized from Ukrainian military depots by Russian naval forces in 2014 during the illegal occupation of the Crimean peninsula and the city of Sevastopol.

Russian troops struck at the airfield in Starokostiantyniv, Khmelnytsky region. Starokostiantyniv Mayor Mykola Melnychuk said that as a result, stocks of fuel and lubricants were destroyed.

The head of the Volyn Regional Military Administration Yurii Pohuliaiko stated that Ukrainian air defense forces shot down a Russian missile over the region.

Minister for Reintegration of the Temporarily Occupied Territories Iryna Vereshchuk said that on March 29, 1,665 people (936 Mariupol residents and 729 residents of population centers of Zaporizhzhia region) were evacuated to Zaporizhzhia via three agreed humanitarian corridors.

The Office of the UN High Commissioner for Human Rights has calculated the estimated civilian casualties in Ukraine caused by the Russian invasion. As of 00:00 on March 29, 2022, there were 3,039 casualties: 1,179 dead and 1,860 wounded. The vast majority of casualties are in territories that were under the control of Ukrainian authorities as of February 24 (1,117 dead and 1,627 wounded). The UN believes that the actual figures are significantly higher, as there is currently no verified information on civilian casualties from cities where intense fighting is ongoing. This applies, for example, to Mariupol and Volnovakha (Donetsk region), Izium (Kharkiv region), Popasna (Luhansk region), and Trostianets (Sumy region), where there are reports of numerous civilian casualties.

Kyiv mayor and head of the Association of Ukrainian Cities Vitalii Klitschko reported continued repression by Russian troops against representatives of Ukrainian local government. During the war, 11 city heads and eight other municipal officials were kidnapped. The most pressing problem for the Kherson region. Thus, according to the General Prosecutor’s Office, on March 28, the Russians kidnapped the mayor of Hola Prystan, Oleksandr Babich. They also detained the head of Mylove territorial community Oleh Yakhnienko.

The Mariupol City Council reports that the forced removal of residents to the territory of the Russian Federation continues in the city. More than 70 people — medical personnel and patients — were forcibly removed from the maternity hospital №2 in the Livoberezhnyi district. The city council also reports that more than 20 thousand Mariupol residents are currently known to have been deported to the territory of the Russian Federation against their will.

The U.N. Office for Refugees reports that 3.9 million people have been forced to leave Ukraine since February 24.

The Prime Minister of Ukraine Denys Shmyhal estimates the total losses from the war at more than a trillion US dollars, and the loss of GDP at 35%.

The Minister of Finance of Ukraine Serhii Marchenko has signed an agreement with the French Development Agency. As a result, Ukraine will receive from France 300 million euros in soft loans for the state budget, which is important for maintaining the stability of the financial system.

On March 29, the Ukrainian and Russian delegations held talks in Istanbul. This was the first face-to-face meeting in the framework of the negotiation process since March 7. As a result of the talks, the head of the Ukrainian delegation, head of the Servant of the People faction, Davyd Arakhamiia described the Ukrainian proposals for a new system of security guarantees for Ukraine. In particular, the matter concerns a possible international treaty that would provide Ukraine with security guarantees by individual states, which should act similarly to Article 5 of the Washington treaty establishing NATO (i.e. it refers to the collective protection of Ukraine in case of an attack on it). At the Istanbul meeting, no formal agreements were signed, however, it was arranged to continue negotiations.

Ukrainian President Volodymyr Zelenskyi made a video address to members of the Danish parliament. He informed the Folketing about the current situation in Ukraine, spoke about the shelling of civilian objects by Russian troops and the humanitarian crisis in the state, and also called on the Danish government to increase sanctions pressure on Russia, introduce an oil and trade embargo and block ports for Russian vessels.

During the day, the President of Ukraine had a telephone conversation with the Prime Minister of the Netherlands, Mark Rutte, informing him about the crimes committed by the Russian Federation against the civilian population of Ukraine. Volodymyr Zelenskyi also had a conversation with Czech Prime Minister Petr Fiala, in which the President noted the importance of the Czech Republic’s humanitarian and security assistance in countering the Russian invasion.

Rafael Grossi, Director General of the IAEA, has arrived in Ukraine. He came to negotiate with the agency to provide technical support to ensure the safety of nuclear facilities on the territory of the state. These include 15 nuclear power reactors at 4 operating plants and the Chornobyl nuclear power plant.

The United States and its allies are planning to impose new sanctions in order to undermine Russia’s military potential.They intend to disrupt critical supply chains that ensure the Russian defense industry and the combat effectiveness of the Russian Armed Forces.

The Polish government supported a bill banning coal imports from Russia. In addition, the Polish government approved a bill on special mechanisms to counteract the maintenance of aggression against Ukraine. The document will expand national powers to freeze Russian and other assets related to supporting Russia’s military aggression against Ukraine.