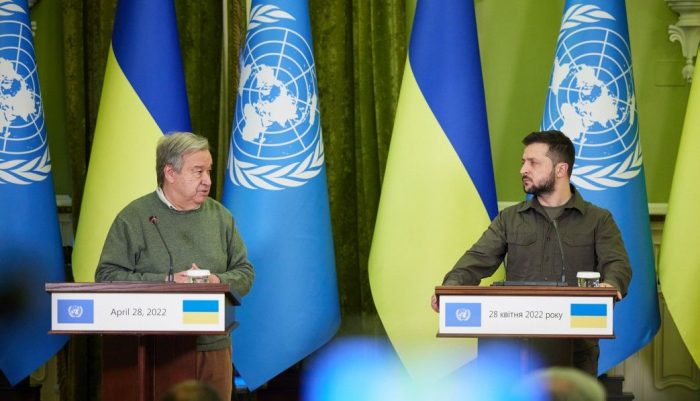 Throughout the day, Russian forces did not conduct active offensives on the front line, trying to consolidate their positions and improve the tactical situation. However, shelling of Ukrainian positions and civilian infrastructure in the east and south of the state continued. Rocket attacks have been recorded in Kyiv and other cities outside the combat zone.

Russian troops struck Kyiv at a time when UN Secretary-General Antonio Guterres was in the city. The rockets hit an object and a residential building in the center of the city, the capital’s Shevchenkivskyi district, as a result of which 10 people were injured.

The missiles also hit the railway infrastructure in the town of Fastiv (Kyiv region) which is an important transport hub.

Russian military forces continue to pose a threat to the northern regions of Ukraine. In particular, the State Border Guard Service reported that Russian troops shelled two checkpoints of Ukrainian border guards in Chernihiv region during the day.

Russian troops continue shelling the territory of the Kharkiv region. According to the Kharkiv Regional Military Administration, at least 6 people have been killed and 19 wounded in the past day and a half.

There is an offensive by Russian troops near Izium. The Armed Forces of Ukraine liberated the village of Kutuzivka east of Kharkiv.

In the Luhansk region, fighting continues for Rubizhne. The head of the Luhansk Regional Military Administration, Serhii Haidai, reported that 4 civilians were killed in the region on April 27; 4 more were wounded.

As a result of the airstrike on New York (Donetsk region), 3 civilians were killed and 3 people were wounded. In addition, 1 person was wounded in Marinka during the day.

According to the Zaporizhzhia Regional Military Administration, the Russian military launched a rocket attack on Zaporizhzhia. According to preliminary information, 3 people were injured and 2 houses in the private sector were damaged.

Near Melitopol (temporarily occupied part of Zaporizhzhia region), a railroad bridge was blown up, which the Russian military uses to deliver weapons and fuel from occupied Crimea.

According to Valentyn Reznichenko, head of the Dnipropetrovsk Regional Military Administration, there was a missile strike in the region on April 28. A Russian missile hit an abandoned industrial area.

The General Staff of the Armed Forces of Ukraine reported repulsing a Russian offensive near the administrative border of the Kherson and Mykolaiv regions.

The head of the Khmelnytskyi Regional Military Administration, Serhii Hamalii, informed about a missile strike on an infrastructure facility in the Shepetivka district of the region. Shepetivka is an important railway junction.

The Center for Countering Disinformation warned of hacker attacks on Ukrainian government agencies. Cybercriminals are sending letters with the subject line “Decree of the President of Ukraine No 576/22 on unprecedented security measures”, attacking computers with the malicious program Meterpreter.

Since the beginning of the full-scale armed invasion by the Russian Federation as of April 27, 2022, the Office of the UN High Commissioner for Human Rights has recorded 6,009 civilian casualties in Ukraine (2829 dead, 3180 wounded).

In the liberated territories, the threat of mines remains acute. The head of the Kyiv region police Andrii Niebytov stated that on April 28, 1 person was killed and 3 injured in the region due to the explosions of mines.

The World Health Organization (WHO) has warned that the humanitarian crisis unfolding in Ukraine because of the war has had a tragic impact on the health and well-being of the population. There has been a disruption in immunization of the population, with a significant increase in the risk of circulating poliomyelitis, outbreaks of other childhood diseases and further spread of COVID-19.

Mariupol City Council informed that the city residents who remain on its territory (about 100 thousand people) are in danger due to lack of water supply and provision of normal sanitary and hygienic conditions. In Mariupol, because of this, powerful epidemics of cholera, dysentery and Escherichia coli may break out.

According to the Zaporizhzhia regional prosecutor’s office, the Russian military is  seizing crops and agricultural equipment from Ukrainian farmers in Zaporizhzhia region and taking them to the temporarily occupied Crimea. According to ombudsman Liudmyla Denisova, the theft of food from the temporarily occupied territories is a violation of the 1949 Geneva Convention relative To the Protection of Civilian Persons in Time of War and a war crime under the Rome Statute of the International Criminal Court.

According to U.S. Secretary of State Anthony Blinken, the United States is considering transferring frozen funds from the Central Bank of the Russian Federation to Ukraine. The United States Federal Reserve has frozen nearly $100 billion of the Bank of Russia’s funds.

During the visit of Ukrainian Minister of Agrarian Policy Mykola Solskyi to Lithuania, an agreement was reached on the export of some Ukrainian grain through the Lithuanian port of Klaipeda.

The U.S. House of Representatives supported the bill on the Lend-Lease and democracy protection in Ukraine. There were 417 congressmen in favor of the document and 10 against. The new bill would make it possible to provide military weapons, ammunition and equipment to Ukraine more quickly.

U.S. President Joe Biden submitted a $33 billion request to Congress in support of Ukraine. The request for matching funding includes more than $20 billion for weapons, ammunition and other military aid, as well as $8.5 billion in direct economic aid to the government and $3 billion in humanitarian and food aid.

The German Bundestag voted to pass a resolution calling on the government to expand and accelerate the provision of heavy weapons to Ukraine. The document, titled “Defend Peace and Freedom in Europe — Comprehensive Support for Ukraine”, is a joint proposal by the CDU/CSU opposition bloc and coalition parties.

Ukrainian President Volodymyr Zelenskyi met with UN Secretary-General António Guterres, who arrived in Kyiv. They discussed UN financial and humanitarian aid to Ukraine and its citizens, as well as the importance of involving the Organization in the post-war reconstruction of the state. The establishment of a special international tribunal for Russian war crimes was proposed. Volodymyr Zelenskyi called on the UN to make efforts to stop the deportation of Ukrainian citizens to the Russian Federation. At a press conference following the visit, Guterres admitted that the work of the UN Security Council was “paralyzed“, which made it impossible to prevent or end the war.

During the meeting with the UN Secretary General, Prime Minister of Ukraine Denys Shmyhal urged the UN to become more involved in unblocking humanitarian corridors for the safe evacuation of civilians from the temporarily occupied territories or active combat zone, especially from Mariupol.

Bulgarian Prime Minister Kiril Petkov paid a visit to Ukraine. He met with Ukrainian President Volodymyr Zelenskyi. During the meeting, they initiated the establishment of cooperation on the repair of Ukrainian military equipment at Bulgarian production facilities. The sides also discussed cooperation in the energy sphere and reached an agreement on the transportation of Ukrainian agricultural products via Varna, the Bulgarian port on the Black Sea.

The Parliamentary Assembly of the Council of Europe (PACE) adopted a resolution in which it proposes to urgently set up a special international tribunal to investigate the crimes of Russian military aggression in Ukraine. The resolution noted that both the Russian military and political leadership and those who directly committed the crimes should be prosecuted by the tribunal.

The OSCE announced that it would soon stop the work of the Special Monitoring Mission to Ukraine due to the position of the Russian Federation, which led to the lack of consensus on the extension of the mission’s mandate.

The head of the Verkhovna Rada of Ukraine Ruslan Stefanchuk held video talks with the Speaker of the Swedish Riksdag Andreas Norlen. The parties discussed the financial assistance of Sweden. Stefanchuk noted the importance of Sweden’s humanitarian aid to Ukraine and the comprehensive approach to the reception of Ukrainian citizens.