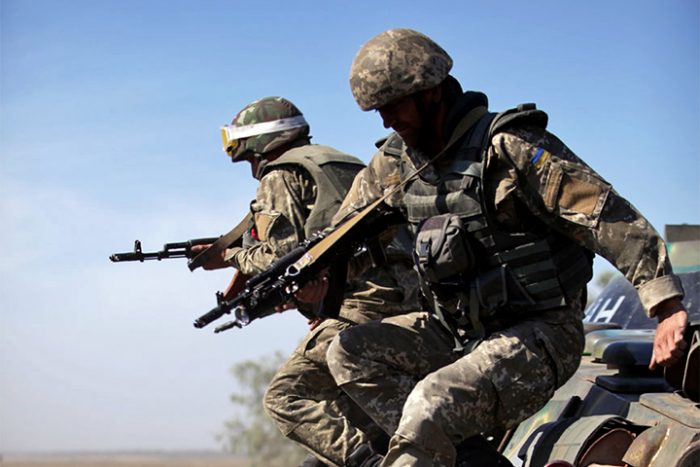 According to the Kyiv City State Administration, as a result of hostilities near Kyiv, two high-voltage lines supplying electricity to some buildings on the right bank of the capital were damaged.

The mayor of Irpin Oleksandr Markushyn announced the liberation of the city from Russian troops.

The General Staff of the Armed Forces of Ukraine reports that the Ukrainian military is continuing its defensive operation in the Kyiv direction, holding positions in the settlements of Motyzhyn, Lisne, Kapitanivka and Dmytrivka along the Zhytomyr highway.

The head of the Kharkiv Regional Military Administration Oleh Syniehubov stated that during March 28, Russian troops carried out about 59 artillery and mortar shellings in the region. 180 MLRS shellings, including cluster munitions, were also recorded. The targets of the shelling were the districts of Saltivka, Oleksiyivka, Piatykhatky, Chuhuiv and Derhachi.

The Kharkiv Regional Prosecutor’s Office reports that on March 28, Russian troops launched a missile strike on the town of Liubotyn in the Kharkiv district of the Kharkiv region. As a result, 7 houses and a car were damaged; 1 person was killed and 7 others were injured.

According to the head of the Luhansk Regional Military Administration Serhii Haidai, Russian troops again fired on Sievierodonetsk and Rubizhne. As a result of the Russian shelling, 2 people were killed and 10 were injured in those days. In the region, 23 objects were damaged — 14 apartment buildings and 8 private houses, as well as a hospital building in Sievierodonetsk.

Pavlo Kyrylenko, head of the Donetsk Regional Military Administration, informs that during March 28, Russian troops continued shelling the territory of Marinka community. Two people were injured in Marinka and Novomykhailivka.

According to the head of the Rivne Regional Military Administration Vitalii Koval, the Russian military launched a missile strike on an oil depot in the Rivne region.

The mayor of Melitopol, Ivan Fedorov, reported that the Russian troops temporarily controlling the city have been holding its information blockade for the second day. They have blocked mobile communications and the Internet in Melitopol.

Ukrtelecom’s press service indicated that on March 28, a powerful cyberattack was carried out on the company’s IT infrastructure, which disrupted Internet operation for over 70% of Ukrtelecom’s network users in Ukraine.

According to the Minister of Reintegration of the Temporarily Occupied Territories Iryna Vereshchuk, the humanitarian corridors were not opened on March 28 because of possible provocations on the routes of humanitarian corridors and for reasons of citizens’ safety. At the same time, the Minister addressed the risk of damage to the isolation facilities at the Chornobyl nuclear power plant as a result of the occupation of the exclusion zone by the Russian military. In case of such damage a significant amount of radioactive dust could enter the atmosphere and contaminate not only Ukraine but also other European countries.

Juvenile prosecutors reported that 143 children were killed and 216 injured during full-scale hostilities in Ukraine.

The mayor of Mariupol, Vadym Boychenko, reported approximate losses and destruction in the city during its siege by Russian troops. According to him, as of March 27, almost 5 thousand people were killed in Mariupol, including about 210 children. During this period as a result of shelling and bombardment in the city 90% of the total number of apartment buildings were damaged. Three hospitals were also destroyed; seven more medical facilities were damaged. In addition, Russian troops struck 57 schools and 70 kindergartens, of which 23 and 28 were destroyed respectively. By the beginning of the blockade, up to 140,000 people had left Mariupol; subsequently, another 150,000 people were evacuated. A total of 170,000 people remained in the siege. Thirty thousand people were deported to the Russian Federation.

Yurii Sobolevskyi, first deputy chairman of the Kherson regional council, informed about the detention of Oleksii Konovalov, a deputy of the local council from the Servant of the People party, in Henichesk of the Kherson Region. He later clarified that the Russian military had released the deputy.

On March 28, it became known that a journalist of the UNIAN news agency Dmytro Khyliuk, who was abducted in the village of Kozarovychi, Kyiv region, approximately in early March, is being held hostage.

The mayor of Melitopol, Ivan Fedorov, reports that Russian troops have detained the head of the city’s education department, Iryna Shcherbak. According to him, in this way they are trying to put pressure on the teachers of Melitopol, forcing them to resume the educational process according to the Russian program.

Vitalii Barabash, head of the Avdiivka city civil-military administration, spoke about the humanitarian situation in the city, which is located in the Donetsk region. As a result of Russian shelling, Avdiivka remains without heating and water. There are problems with electricity supply.

According to the mayor of Enerhodar (Zaporizhzhia region) Dmytro Orlov, local residents gathered for a pro-Ukrainian rally against the temporary occupation of the city by Russian troops. In particular, this time people again called for the release of the first deputy mayor Ivan Samoydiuk from captivity.

Minister of Energy Herman Halushchenko indicated that the losses of the energy sector from the full-scale invasion of the Russian Federation into Ukraine as of the end of March amounted to 2 billion US dollars.

On March 28, Ukrainian President Volodymyr Zelenskyi had a series of telephone conversations with world leaders. Thus, with British Prime Minister Boris Johnson they discussed the critical humanitarian situation in cities blocked by Russian troops, the progress of negotiations with Russia, the prospects for strengthening sanctions against Russia, as well as the defense cooperation between Ukraine and the UK.

With Azerbaijan President Ilham Aliyev, Volodymyr Zelenskyi discussed the need for green corridors to protect civilians in the war zone. The Ukrainian President thanked Azerbaijan for providing humanitarian aid and readiness to provide Ukraine with fuel. Volodymyr Zelenskyi also discussed with Olaf Scholz, Federal Chancellor of Germany, the negotiation process with the Russian Federation, reported on the progress of countering Russian aggression and crimes on Ukrainian territory, and called for tougher sanctions.

On the same day, Volodymyr Zelenskyi had similar talks with Italian Prime Minister Mario Draghi and Bulgarian Prime Minister Kirill Petkov. Moreover, the President of Ukraine discussed the Ukrainian-Canadian cooperation in the spheres of defense and sanctions against Russia with the Prime Minister of Canada Justin Trudeau and informed him about the Russian crimes in Ukraine and peculiarities of the negotiation process with the Russian side.

The European Bank for Reconstruction and Development closes its offices in Moscow and Minsk because of Russia’s full-scale invasion of Ukraine. The EBRD has reiterated its unwavering support for Ukraine and has already agreed on an initial €2 billion stability package for Ukraine and other war-affected countries.

On March 28, the energy ministers of the G7 countries held a conference, which resulted in a statement on the rejection by the G7 states of Russia’s demands for payment for gas in rubles. The parties stressed that the Kremlin’s demands represent “a unilateral and blatant violation of existing contracts.

The Council of the European Union agreed on a 10-point plan to support Ukrainian refugees, as well as the EU countries that host the bulk of them.