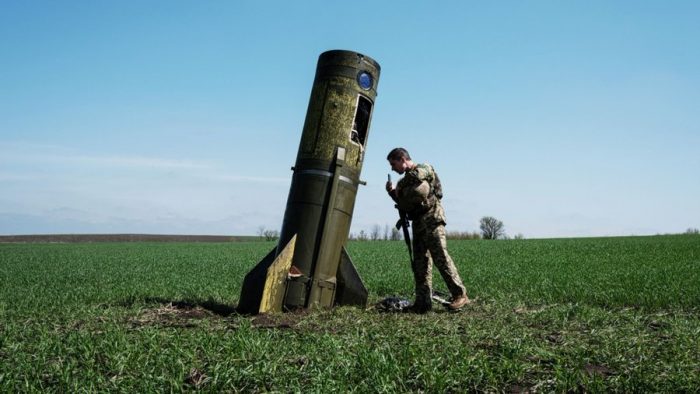 Russian troops continue their attempts to encircle units of the Armed Forces of Ukraine in the area of the Joint Forces operation, advancing from the area of Izium (Kharkiv region) in the north and towards Kurakhove (Donetsk region) in the south.

Dmytro Zhyvytskyi, head of the Sumy Regional Military Administration, indicated that the Russian military had shelled the territory of the Esman community near the border.

The shelling of the Kharkiv region is ongoing. The head of the Kharkiv Regional Military Administration Oleh Syniehubov reports that as of the evening of April 27, 4 people had died and 21 had been injured in the region.

The head of the Luhansk Regional Military Administration, Serhii Haidai, said that Russian troops had fired on the territory of the Hirske Community, located near the line of contact. According to preliminary information, at least 1 person was killed. Luhansk Regional Military Administration also reported heavy shelling of Lysychansk during the day.

Russian troops are preparing to attack the town of Lyman in the north of the Donetsk region. They intensified shelling of Avdiivka near Donetsk. Pavlo Kyrylenko, head of the Donetsk Regional Military Administration, reported that the Russian army bombarded the town twice with phosphorus shells. As a result of the shelling, several fires broke out in Avdiivka, according to preliminary information at least 1 person was injured. In other districts of the region, 1 person was killed and 7 other civilians were wounded during the day.

Ivan Arefiev, a representative of the Zaporizhzhia Regional Military Administration, reported that the Russian military are trying to improve their own tactical position in the Zaporizhzhia direction. In particular, to this end, they continue air strikes and artillery fire on residential infrastructure.

The intensity of enemy shelling in the direction of Kryvyi Rih is increasing. According to the Dnipropetrovsk Regional Military Administration, Russian troops shelled the town of Zelenodolsk, as well as adjacent villages, with artillery. In Zelenodolsk, an energy infrastructure company was hit, and 1 person was wounded.

Russia is trying to cut off the southern part of the Odesa region and block one of the highways connecting Ukraine with Romania.  For this purpose, Russian troops carried out a repeated missile strike on a road and rail bridge across the Dniester estuary in Zatoka  (Odesa region).

Also the Russian military continues to concentrate efforts on the Mykolaiv and Kryvyi Rih directions.

In temporarily occupied Kherson, explosions were heard near the local television center. After that, Russian television’s broadcasting was stopped in the city.

The American company Microsoft released a report on Russia’s use of numerous cyber attacks against Ukraine. The report indicates that the corresponding cyberattacks from the Russian side have intensified in the Ukrainian cyberspace since March 2021. More than 40 percent of cyber attacks by the Russian Federation during this period were carried out against organizations in the critical infrastructure sector, and another 30 percent against Ukrainian government agencies.

The Office of the UN High Commissioner for Human Rights recorded 5,939 civilian casualties in Ukraine as of April 26, 2022 (2,787 dead and 3,152 wounded). More than 610 children suffered as a result of the armed aggression of the Russian Federation. As of the morning of April 27, 217 children had been killed and more than 393 injured, according to official prosecutor’s office data.

The UN Refugee Agency estimates that as of April 28, 5.37 million people (90% of whom are women and children), had left Ukraine as a result of the Russian invasion.

Ombudsman Liudmyla Denisova reports that there were about 400 appeals from Ukrainians about cases of sexual violence by the Russian military during the first half of April.

The Main Directorate of Intelligence of the Ministry of Defense of Ukraine informed that large-scale “filtration activities” are being carried out by the Russian military in the temporarily occupied territories. The victims are mostly men of conscription age (primarily veterans of the ATO/JFO, former military and law enforcement officers, and pro-Ukrainian activists).

The WHO has reported ongoing attacks on the Ukrainian healthcare system — including those against medical facilities, transport, personnel, patients, supplies, and warehouses. Since the beginning of the large-scale Russian invasion, as of April 28, 171 incidents have been recorded, resulting in 73 deaths and 52 injuries.

The Deputy Head of the Office of the President, Kyrylo Timoshenko, revealed that more than 18,000 objects of infrastructure have been destroyed in Ukraine as a result of the hostilities.

Residents of temporarily occupied Kherson held a rally protesting the occupation of the region and a possible referendum that Russia is planning to organize. The Russian military dispersed the rally with stun grenades and tear gas. 4 people suffered injuries and burns.

The European Commission proposed suspending import duties on all Ukrainian exports to the European Union for a year. Ukrainian President Volodymyr Zelenskyi discussed the details of this initiative with the president of the European Commission, Ursula von der Leyen. In his address, he supported the proposal, stressing that it would allow Ukraine to maintain economic activity as much as possible in war conditions.

Prime Minister Denys Shmyhal admits that Ukraine’s GDP could decline by 30-50% in 2022.

UN Secretary General Antonio Guterres has arrived in Ukraine. He plans to discuss with President Zelenskyi the issue of expanding Ukraine’s humanitarian support and ensuring the evacuation of civilians from hostilities.

The President of Ukraine Volodymyr Zelenskyi discussed the problem of food security with the President of Indonesia Joko Widodo, and thanked for the support of Ukraine’s sovereignty and territorial integrity. Zelenskyi also said that during the talks, Widodo invited him to take part in the G20 meeting, which will be held in Indonesia in November 2022.

Volodymyr Zelenskyi also spoke with Italian Prime Minister Mario Draghi. He expressed gratitude for Italy’s support in tightening sanctions against Russia, as well as for providing shelter for more than 100,000 Ukrainian refugees.

European Commission President Ursula von der Leyen considers it unacceptable for Russia to suspend gas supplies to European consumers, namely Poland and Bulgaria, which have refused to pay for fuel in Russian rubles. According to von der Leyen, this is an element of blackmail and demonstrates the unreliability of Russia as a supplier.

The Swiss Federal Council has imposed additional sanctions against Russia. New measures include blocking the import of certain categories of Russian goods, banning support for Russian state and public organizations, and registering trusts for Russian citizens or individuals or legal entities residing in Russia.

At the same time, the Swiss government, citing its policy of neutrality, vetoed the re-export of Swiss-made ammunition used in German Gepard self-propelled anti-aircraft artillery units to Ukraine. According to Business Insider, the problem can be solved thanks to Brazil’s agreement to sell the relevant ammunition to Ukraine.

Austrian Chancellor Karl Nehammer denied reports in the Russian press that Vienna has allegedly agreed to pay for Russian gas in rubles.

The Parliamentary Assembly of the Council of Europe (PACE) adopted a resolution calling for the establishment of an international tribunal against Russia’s military-political leadership.

The US Congress has approved a symbolic bill calling on the US President to use funds confiscated from Russia and its citizens against whom sanctions have been imposed to help Ukraine.

The House of Commons of the Canadian Parliament unanimously recognized the crimes of the Russian Federation in Ukraine as genocide. Prior to that, such decisions were made by the parliaments of Estonia and Latvia.