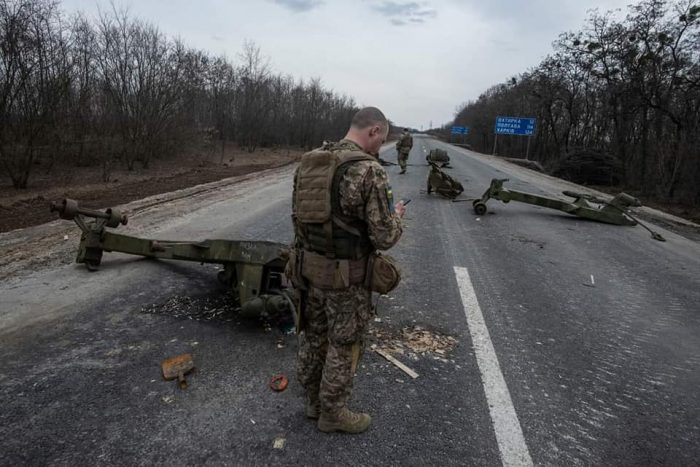 According to the Kyiv Regional Military Administration, fighting continued throughout the day in Irpin. Russian troops also shelled Makariv, controlled by Ukrainian units.

Zhytomyr Mayor Serhii Sukhomlin commented on the explosions felt by the city’s residents on the evening of March 27. According to preliminary data, the information about the strike on Zhytomyr is not confirmed. Two explosions were recorded, which may indicate a hit outside the city or the work of the Ukrainian air defense system.

Oleh Syniehubov, the head of the Kharkiv Regional Military Administration, stated that the Armed Forces had liberated the village of Husarivka, not far from Balakliia. He also confirmed that the village of Mala Rohan is completely under the control of the Ukrainian military; fighting continues in the area of ​​the village of Vilkhivka.

Russian aircraft struck the village of Oskil in the Izium district of Kharkiv region. According to the Kharkiv Regional Military Administration, the rocket hit one of the residential buildings. A family of 4 died; 1 child was injured.

The head of the Luhansk Regional State Administration Serhii Haidai said that as a result of the shelling in the township of Borivske during March 27, 1 child was killed and 2 other people were wounded.

Mariupol Mayor Vadym Boychenko indicated that Russian troops were tightening the ring around Mariupol, moving inland, but the city remained under the control of the Armed Forces of Ukraine.

The police of the Donetsk region said that the Russian military fired on the residential areas of Krasnohorivka (Donetsk region) with cluster munitions, using MLRS “Tornado-C”.

According to a spokesman for the Odesa Regional Military Administration, Serhii Bratchuk, a Russian missile was shot down over the Odesa region at night.

In the evening, Russian troops fired on Lutsk. The head of the Volyn Regional State Administration Yurii Pohuliaiko informed about the rocket attack on the oil depot.

Valerii Zaluzhnyi, Commander-in-Chief of the Ukrainian Armed Forces, reports on Russian information operations aimed at discrediting the Ukrainian army. According to the military, the Russians shoot and distribute staged videos with the inhumane treatment of allegedly “Ukrainian military” to “Russian prisoners.” Advisor to the Head of the Office of the President Oleksii Arestovych commented on the video spread on the Internet, which allegedly records the mistreatment of the Russian prisoners. An investigation will be carried out in relation to it.

Minister for the Reintegration of the Temporarily Occupied Territories Iryna Vereshchuk reported that two humanitarian corridors for Donetsk and Luhansk regions went functional on 27 March. She specified that in total more than 1 thousand people were evacuated. 586 people reached Zaporizhzhia from the city of Mariupol in their own vehicles in a 24-hour period.

As of March 27, 2022, according to juvenile prosecutors in Ukraine, 139 children were killed and more than 205 were injured as a result of the Russian invasion.

Verkhovna Rada Commissioner Lyudmyla Denisova reported that the Russians are carrying out mass deportations from the temporarily occupied territories of Ukraine, thus violating Article 49 of the Geneva Convention relative to the Protection of Civilian Persons in Time of War. For example, in the hospital named after Vyshnevskyi in occupied Donetsk, there are parentless children taken from Mariupol. “In total, we are talking about tens of thousands of Ukrainians forcibly relocated in this way,” said Minister for the Reintegration of the Temporarily Occupied Territories Iryna Vereshchuk.

Forests are burning in the exclusion zone in the vicinity of the Chornobyl nuclear power plant because of the hostilities. According to the Verkhovna Rada Commissioner for Human Rights Lyudmyla Denisova, 31 fires have been recorded, covering more than 10 thousand hectares of forests. This leads to an increased level of radioactive air pollution. It is impossible to control and extinguish the fires due to the occupation of the exclusion zone by Russian troops. The existing threat is of international significance.

According to the General Staff of the Armed Forces of Ukraine, the Russian military transports tens of tons of ammunition daily from a logistics base deployed in the Gomel region of the Republic of Belarus. The transport corridor passes through the city of Prypiat, and further storage of ammunition takes place in the city of Chornobyl. This seriously increases the risk of damage to the isolation structures built over reactor №4 of the plant after its explosion in 1986.

Human rights activist Oleksandra Matviychuk published a list of 36 public figures and activists detained in the Russian-occupied territories of Ukraine after February 24 (in Melitopol, Kherson, Berdiansk, Kakhovka, Slavutych and other population centers). Given the growing number of hostage-taking cases, the human rights activist believes that these actions should be considered a prohibited method of warfare.

Residents of Kherson continue to come out in protests against the temporary occupation of the region by Russian troops. During the day, several hundred residents of Kakhovka, Nova Kakhovka, and Kherson gathered for a peaceful pro-Ukrainian rally. In particular, Kherson reported that the Russian military attempted to disperse the demonstration by shooting and using gas grenades. According to the protesters, one person was injured.

The press service of the Ministry of Finance of Ukraine informs that almost 6 billion hryvnias  of remaining educational subventions will be used to support communities during martial law.

According to MP Danylo Hetmantsev, 89 businesses from different regions of the state have already been relocated to the western regions of Ukraine as part of the evacuation program from the war zone. Also, Hetmantsev announced that the Verkhovna Rada together with the Cabinet of Ministers have prepared a bill that will increase taxes in Ukraine by 1.5 times for companies that continue to work in Russia.

Davyd Arakhamiia, a member of the negotiating group, and head of the “Servant of the People” faction in the Verkhovna Rada, stated that at the next round of online negotiations between Ukraine and Russia, it was decided to hold the next meeting between the two delegations in Turkey. The talks will be held on March 29 in Istanbul.

Israeli Prime Minister Naftali Bennett during a joint press conference with U.S. Secretary of State Anthony Blinken in Jerusalem said that Israel firmly supports the people of Ukraine and will pursue its efforts to stop the bloodshed.

Finland has completed the process of cancelling rail passenger traffic with the Russian Federation. Finland also suspends rail freight traffic from Russia. From now on, Russia has no railway connection with any country of the European Union.

The High Council of Justice asked the UN High Commissioner for Human Rights Michelle Bachelet and the Director of the OSCE Office for Democratic Institutions and Human Rights Matteo Mecacci to immediately initiate the issue of excluding the Russian Federation from these organizations due to the actions of Russia on the territory of Ukraine, incompatible with the principles and values of international organizations, which are guided by international law and aimed at maintaining peace in the world.