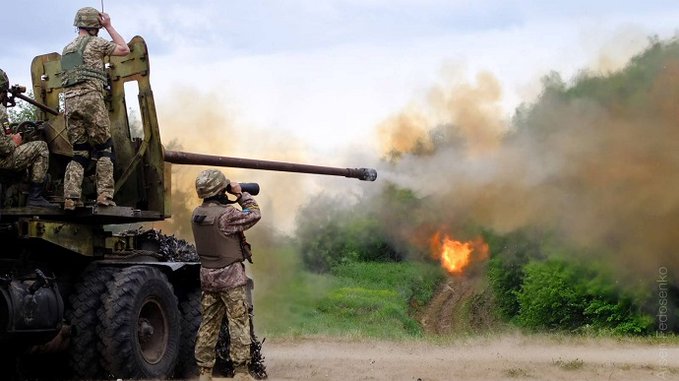 Russian troops have concentrated their efforts on capturing the territory of Luhansk region. The main battles continue in the area of the Sievierodonetsk-Lysychansk agglomeration, where the Ukrainian grouping is under threat of encirclement. In other sectors of the front, the parties are not conducting active offensive actions, however, active shelling that damages civilian infrastructure is ongoing. The intensity of Russian missile attacks against Ukraine’s rear areas decreased to a certain extent. In turn, the Ukrainian Armed Forces carried out several targeted strikes against Russian-controlled facilities (the temporarily occupied island of Zmiinyi, gas drilling platforms in the Black Sea, and an oil refinery in the Rostov region).

Russian troops attacked positions of the Armed Forces of Ukraine in the Sievierodonetsk industrial zone and established control over several settlements to the southeast and south of the Sievierodonetsk-Lysychansk agglomeration. As a result, Russian troops are advancing towards Lysychansk from the south and intensely shelling the city itself. This creates a threat of cordoning off Ukrainian troops, which is exacerbated by Russian attacks on the Bakhmut direction, aimed at cutting the strategically important Bakhmut-Lysychansk road.

On the Sloviansk direction, the intensity of Russian attacks has decreased. Russian troops are trying to improve the tactical situation in certain parts of the front and are preparing to resume their offensive by launching artillery strikes against the positions of the Ukrainian Armed Forces.

Artillery and aviation shelling of the Donbas and Luhansk regions has intensified. In Avdiivka, Russian forces destroyed another educational institution on the night of June 21. Near Bakhmut, a beach was hit, resulting in civilian casualties. In total, at least 8 civilians were killed and 26 injured in the Donetsk region between June 20 and 22.

Russian forces hold positions near Kharkiv, trying to prevent Ukrainian Armed Forces units from reaching the rear of the grouping operating in the Sloviansk direction. Shelling of the regional center and nearby areas intensified. As a result of the strikes on 19 June, civilian infrastructure – including educational institutions – was damaged. On June 20, the Kharkiv subway facility was hit. During June 20-22, at least 21 civilians were killed and 29 injured in the Kharkiv region.

In Zaporizhzhia region, Russian troops continue shelling in order to restrain Ukrainian units and prevent their transfer to other parts of the front.

The Armed Forces of Ukraine carried out several pinpoint strikes against Russian infrastructure. On June 20, the Ukrainian military launched a missile strike on gas drilling platforms, which were owned by Ukraine’s Chornomornaftogaz and had been seized by Russia during the 2014 occupation of Crimea. Also, a concentrated strike using various means of destruction was carried out on the temporarily occupied Zmiinyi Island. Thus, during June 20-22 in the Black Sea waters, the Ukrainian Armed Forces destroyed both Russian surface-to-air missile systems and radar equipment at these sites. In addition, on the evening of June 22, a missile strike was launched against Russian depots in the temporarily occupied town of Skadovsk in the Kherson region.

Russian troops do not stop shelling in the Kryvyi Rih and Mykolaiv regions. In Mykolaiv region, Mykolaiv city itself  and the town of Ochakiv, where the military infrastructure of the Ukrainian Armed Forces is located, remain targets for missile strikes. The shelling results in casualties among the civilian population. In recent days, more than 20 people have been injured on the territory of Mykolaiv region.

Russian troops concentrated their efforts on shelling the southern and northern regions of Ukraine. Rocket strikes were carried out in the Odesa region. In the north, the shelling of Chernihiv and Sumy regions continues unabated.

According to the Office of the UN High Commissioner for Human Rights, as of June 22, the number of civilian casualties in Ukraine since the start of the large-scale Russian invasion is 10,403 (4,634 killed and 5,769 wounded).

As of the morning of June 22, more than 916 children (324 children killed, 592 wounded) suffered as a result of the armed aggression of the Russian Federation in Ukraine.

The humanitarian situation in the zone of active hostilities remains extremely difficult. According to the UN Office for the Coordination of Humanitarian Affairs, more than 2.2 million people in the Donetsk region alone are in need of immediate assistance and rescue, including due to problems with their basic needs. The water supply system in Sloviansk (Donetsk region) has been damaged due to shelling; electricity supply to the town is also limited; there is virtually no food supply. Residents of temporarily occupied Mariupol have not had access to drinking water, electricity, or gas for months. Mayor Vadym Boichenko reported that the epidemic situation in Mariupol is deteriorating. Numerous spontaneous burials of dead civilians, lack of sewage system and inoperative garbage collection system create preconditions for infectious diseases.

The Russian military still holds many illegally captured Ukrainian journalists, community activists, priests, local government leaders, and volunteers hostage. Women and elderly people are being held captive, which contradicts international law. According to Dmytro Orlov, mayor of Enerhodar (Zaporizhzhia region) mass kidnappings of civilians, including employees of the Zaporizhzhia NPP, continue in the city. Thus, the occupation administration of the city is trying to neutralize the resistance of local activists to strengthen control and the use of prisoners for further exchanges.

An investigation by the human rights organization Reporters Without Borders (RSF) gathered new evidence of the murder of Ukrainian photojournalist Maks Levin, who was killed near Kyiv in mid-March. According to the organization, Levin and his companion, military officer Oleksii Chernyshov, were executed by the Russian military.

On June 22, the car of Ukrainian MP Oleksii Kovalov cooperating with the Russian occupation administration was blown up in the temporarily occupied Kherson region. Kyrylo Budanov, head of the Main Directorate of Intelligence of the Ministry of Defence of Ukraine, confirmed the operation by Ukrainian security forces and the local resistance.

At a meeting of the Cabinet of Ministers of Ukraine, Prime Minister Denys Shmyhal announced that the Ukrainian government is launching the “eRobota” program, under which the state will provide grants of up to 250 thousand hryvnias to launch new businesses.

The Verkhovna Rada of Ukraine has ratified the agreement to abolish import duties and tariff quotas in bilateral trade between Ukraine and the United Kingdom, which will be effective for at least the next 12 months. This step will increase foreign currency revenues from the export of Ukrainian agricultural products and will also facilitate the development of Ukrainian production.

Also the Parliament of Ukraine on June 21, 2022 approved a bill to amend the Customs Code to further ensure the accession of Ukraine to the regime of joint transit (NCTS) with the EU, as well as on further harmonization of domestic customs legislation with relevant EU legislation.

Chairman of the Board of Naftogaz of Ukraine Yurii Vitrenko informed that due to Russian strikes on infrastructure facilities in Ukraine, the operation of the oil refining industry has been stopped completely. This condition significantly complicates the logistics of oil products on the Ukrainian market and contributes to the emergence of fuel shortages.

According to the estimates of Kyiv School of Economics and the Ministry of Agrarian Policy and Food of Ukraine, indirect losses in Ukrainian agrarian sector as a result of reduction of production volumes, blockade of ports and increased cost of production factors have already reached $23.3 billion.

In the run-up to the meetings of the EU European Council, G7 summit and NATO summit in Madrid at the end of June there is an intensification of the political dialogue at the highest level between Ukraine and its international partners to maintain a consolidated position to support Ukraine at the international platforms.

Prime Minister of the Grand Duchy of Luxembourg Xavier Bethel has paid a visit to Kyiv. He held a meeting with President of Ukraine Volodymyr Zelenskyi. The leaders discussed defense assistance, challenges related to the blockade of Ukrainian ports by the Russian military, as well as the post-war reconstruction of Ukraine. In addition, U.S. Attorney General Merrick Garland arrived in Ukraine on an unannounced visit to discuss common tasks to identify and prosecute those responsible for war crimes in Ukraine. The Goodwill Ambassador of the Office of the UN High Commissioner for Refugees and American film actor Ben Stiller also arrived in Ukraine. At a meeting with Volodymyr Zelenskyi he discussed the needs of temporarily displaced persons in Ukraine, as well as Ukrainian refugees in Poland. The President of Ukraine paid special attention to the violation of the rights of the Ukrainians forcibly deported to the Russian Federation.

Ukraine adopted a number of documents necessary to ensure the candidate status for EU membership and the subsequent implementation of the European integration processes. Verkhovna Rada of Ukraine has adopted a law that defines the direction of Ukraine’s anti-corruption policy until 2025. Anti-corruption strategy is an important step on the way of Ukraine’s European integration and it is necessary to ensure the consistency and consistency in preventing and fighting corruption on all the levels of government. In addition, the Verkhovna Rada supported the law on waste management, which coordinates the principles of extended producer responsibility and the involvement of local authorities. Also, the Istanbul Convention on preventing and combating violence against women and domestic violence was ratified. The President of Ukraine promptly signed the relevant law, completing the process of adoption of this document.

Ukraine is expanding the formats of cooperation with partner states in Central and Eastern Europe. On June 20, 2022 it was announced that Ukraine was granted the status of a participating partner in the Three Seas Initiative, a platform for cooperation in the sectors of economy, infrastructure and energy between 12 Central European states.