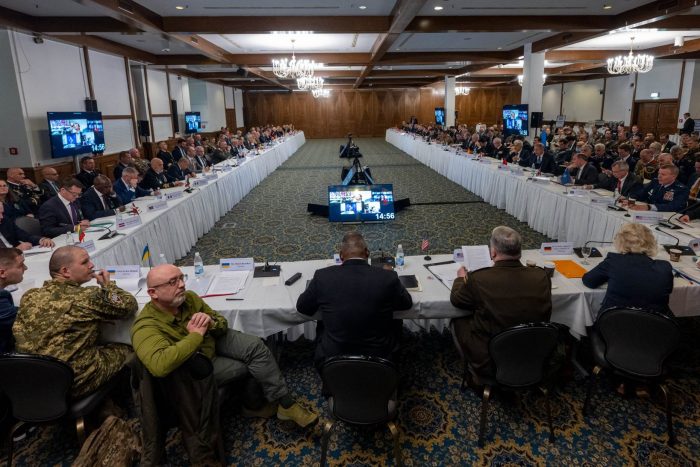 Russian troops are advancing in eastern Ukraine. The main battles are taking place in the territories of Donetsk, Luhansk and Kharkiv regions. The danger of a Russian offensive in the southern direction – to Kryvyi Rih and Mykolaiv – remains.

Provocations continue on the territory of the so-called “Pridnestrovian Moldavian Republic”. Their purpose is to accuse Ukraine of aggressive actions against this enclave, uncontrolled by the Moldovan authorities, which is de facto under the control of the Russian Federation. The Ministry of Foreign Affairs of Ukraine denied any involvement of Ukraine in the events on the territory of the Transnistrian region of Moldova.

The State Border Guard Service of Ukraine reports that additional temporary security restrictions near the state border were imposed in the Sumy region due to shelling from Russian territory.

The shelling of Kharkiv region is ongoing. According to preliminary information, over the past 24 hours, 3 people were killed and 7 were injured in Kharkiv; 5 more were wounded in the region.

Russian troops, supported by artillery, continue to advance from the area of Izium in the direction of Barvinkove. Securing the northern flank of the operation, they succeeded in the area of Velyka Komyshuvakha, where they captured the settlement of Zavody.

In Luhansk region, Russian troops are attempting to seize Rubizhne and Popasna, leading an offensive in the direction of the settlements of Nyzhnie and Orikhove. The shelling of populated areas in the region continues. The Luhansk Regional Military Administration reports that 3 people were killed in Popasna as a result of a shell hitting a multi-storey building.

Vyacheslav Gladkov, governor of the Belgorod region of the Russian Federation, reported that a munitions depot near the village of Staraya Nelidovka caught fire and several explosions were heard.

Russian military attempts to seize Marinka continue in the Donetsk region. The General Staff of the Armed Forces of Ukraine reports the concentration of Russian forces for an offensive on the town of Lyman in the north of the region, where the settlement of Zarichne has been captured and fighting for Yampil continues. Russian troops are also launching offensives in the Kurakhove direction. Artillery and air strikes on the territory of the Azovstal plant in Mariupol continue unabated.

Pavlo Kyrylenko, head of the Donetsk Regional Military Administration, reported that Russian troops carried out an air strike on Avdiivka. As a result of the shelling of Krasnohorivka, the town was left without electricity. In addition, New-York, Travneve, Marinka, Velyka Novosilka and Lyman were shelled during the day. According to preliminary information, 3 people were killed and 6 were wounded.

Ivan Arefiev, a representative of the Zaporizhzhia Regional Military Administration, informed that the Russian army is conducting offensive military operations in the direction of Trudoliubivka. As a result of the shelling, residential houses and infrastructure facilities were damaged in Polohy, Vasylivka, Molochansk and Orikhiv.

The Zaporizhzhia Regional Military Administration specified the results of the rocket attack launched against Zaporizhzhia on the morning of April 26. Infrastructure facilities of a local enterprise were damaged. According to preliminary information, 1 person was killed and 1 more was wounded.

The shelling of Mykolaiv continues. On the night of April 25-26, at least 1 person was killed as a result of shelling in the city. Mayor Oleksandr Sienkevych stated that the city authorities were preparing for a new offensive by Russian troops and a possible siege of the city.

In the Kherson region, shelling from MLRS and other types of weapons continues in the Kryvyi Rih direction. According to Oleksandr Vilkul, head of the military administration of Kryvyi Rih, there is a wounded person among the civilians.

Russian troops launched a missile strike in the Odesa region. The bridge over the Dniester estuary in the Gulf, which provides transport links to the Bolhrad, Bilhorod-Dnistrovskyi and Izmail districts of the region, was damaged. During the day, road and rail traffic across the bridge was restored.

Operational Command “South” reports that the Armed Forces of Ukraine carried out strikes on Russian positions on the temporarily occupied Zmiinyi Island.

The Russian military contingent located on the territory of the so-called Pridnestrovian Moldavian Republic is put on full combat readiness.

“The ministry of internal affairs” of the self-proclaimed “Pridnestrovian Moldavian Republic” reported that two explosions had detonated in the morning in Mayak settlement. Later, it became known that two antennas that were broadcasting Russian radio were put out of order. In his turn, the “president” of the self-proclaimed PMR, Vadim Krasnoselsky, specified about the third attack on a military unit near the village of Parkany.

President of Moldova Maia Sandu stated that the explosions in Transnistria and the escalation attempts were connected with the forces inside the unrecognized region.

The spokesman for the Ministry of Foreign Affairs, Oleh Nikolenko, said that Ukraine supports Moldova’s territorial integrity within its internationally recognized borders and condemns attempts to draw Transnistria into a full-scale Russian war against Ukraine.

The Main Directorate of Intelligence of the Ministry of Defence of Ukraine warns that the Russian Federation is preparing a provocation of a missile strike on Transnistria. Residents have begun to receive text messages, seemingly from the Armed Forces of Ukraine, warning about the attack.

Since the beginning of the full-scale armed attack by the Russian Federation as of April 25, 2022, the Office of the UN High Commissioner for Human Rights has recorded 5,840 civilian casualties in Ukraine (2,729 dead and 3,111 wounded).

Juvenile prosecutors report that as of April 26, more than 608 children have been injured in Ukraine as a result of Russian Federation aggression. 217 children were killed and more than 391 injured.

Petro Andriushchenko, counselor to the mayor of Mariupol, reports that the Russian military is forcing local male residents to work for them, removing rubble and setting up mass graves.

The Ministry of Foreign Affairs of Ukraine called on the UN and the International Committee of the Red Cross to help provide a safe humanitarian corridor from Mariupol.

The Verkhovna Rada of Ukraine Commissioner for Human Rights, Liudmyla Denysova, informed that POWs of the Armed Forces of Ukraine are held in Russian colonies in the Rostov region. For this purpose, two penitentiary institutions in the south of Russia were turned into camps for prisoners of war. POWs are also placed in pre-trial detention facilities in Vyazma, Taganrog, Moscow, and the Bryansk region. At the same time, there has been no official conversion of prisons into camps for prisoners of war, as required by international humanitarian law.

The Prime Minister of Ukraine, Denys Shmyhal said that more than 300 thousand square kilometers of territory in Ukraine is subject to mine clearance. Now they remain dangerous because of planned mines or the consequences of fighting and shelling.

Human Rights Watch has published a report on the events of March 4-31, 2022 in Bucha, Kyiv region. The report provides ample evidence that the actions of the Russian military during the occupation of Bucha have the hallmarks of war crimes.

The U.S. publication The Washington Post, citing Minister of Finance Serhii Marchenko, reported that Ukraine is asking the U.S. for at least $2 billion a month in economic aid.

According to Energy Minister Herman Galushchenko, an agreement was signed in Warsaw to grant Ukrenergo the status of an observer member in the European energy system ENTSO-E.

Director of the Economic Security Bureau Vadym Melnyk said that the withdrawal of foreign currency funds and valuables by residents and non-residents of Ukraine to EU countries since 24 February is more than 3 billion euros.

Ukrainian Prime Minister Denys Shmyhal stated that the government has allocated additional 400m UAH for the liquidation of the consequences of the hostilities and the resumption of critical infrastructure.

The German government offers assistance in organizing grain exports from Ukraine to international markets. The Ministry of Transport of Germany is considering plans to export grain with the help of Deutsche Bahn AG company for cargo rail transportation. In addition, Germany is already negotiating to coordinate this process with the representation of railway transport in Ukraine, Poland, the Czech Republic, Slovakia and Romania.

A meeting of the Defense Advisory Group on Ukraine with the participation of more than 40 countries was held at Ramstein Air Force Base in Germany. The main purpose of the meeting was to synchronize and coordinate military assistance to Ukraine.

Ukrainian President Volodymyr Zelenskyi met with Romanian Prime Minister Nicolae Ciucă in Kyiv. He thanked for defense and humanitarian support, as well as for Romania’s clear position on the sanctions imposed against the Russian Federation.

Volodymyr Zelenskyi also had a meeting with IAEA Director General Rafael Mariano Grossi. The parties discussed the threats posed by Russia and measures that could make the world safer from Russian actions.

Zelenskyi also had a telephone conversation with Japanese Prime Minister Fumio Kishida. He briefed on countering Russian aggression and thanked Japan for its important support. The sides discussed the prospects for post-war interaction. Zelenskyi expressed the hope that Japan would become a party to future security guarantees with regard to Ukraine.

British Parliamentary Under-Secretary of State for the Armed Forces James Heappey declared that he considered it legitimate for Ukraine to use the weapons transferred by the British side to strike at Russian territory in order to undermine the logistical capabilities of Russian troops. British Foreign Secretary Liz Truss also states that aid to Ukraine should not be limited to defense weapons alone.

German Economy Minister Robert Habeck indicated that Berlin is ready to stop importing Russian oil. He said that alternative sources of supply could be found within days.

UN Secretary General António Guterres visited Moscow, where he met with Russian Foreign Minister Sergei Lavrov and Russian President Vladimir Putin. The secretary general said that the UN views Russia’s actions in Ukraine as a violation of the territorial integrity of a sovereign state, which contradicts the organization’s charter. António Guterres proposed the creation of a contact group in the UN-Russia-Ukraine format to provide humanitarian corridors.

The Polish government imposed sanctions against 15 Russian oligarchs and 35 Russian and Belarusian companies and their subsidiaries in Poland. Among them are Gazprom, Novatek and Kaspersky Lab. The list is to be expanded, because the Polish services are now working to identify companies that hide their ultimate Russian beneficiaries due to their registration in offshore zones.