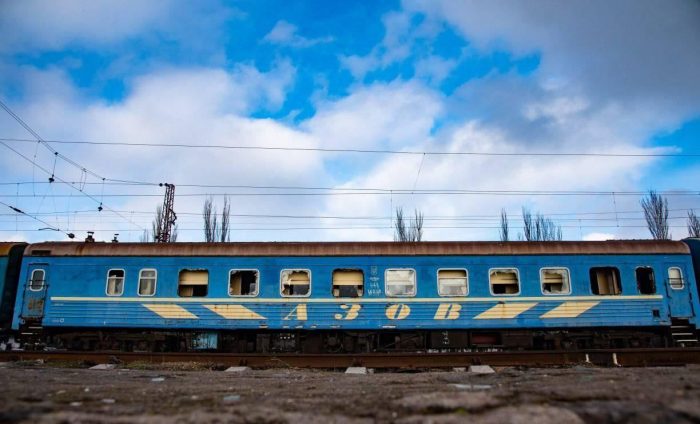 Russia has stepped up attacks on Ukraine’s transportation infrastructure. During the day, missile strikes were launched against at least five railroad stations in central and western Ukraine. Thus, the Russian military command is trying to complicate logistics for the Armed Forces of Ukraine, which receive weapons from Western allies.

In the Zhytomyr region, a missile strike was launched against the town of Korosten. The target of the attack was railroad infrastructure. According to preliminary information, there were no casualties.

Dmytro Zhyvytskyi, head of the Sumy Regional Military Administration, reported that Russian troops carried out a provocative shelling of Bilopillia from Russian territory.

The shelling of Kharkiv and districts near the regional center (Derhachi and Zolochiv districts) continues. According to the Kharkiv Regional Military Administration, at least 4 civilians were killed and 9 others were injured during the day.

In the Izium direction, Russian troops continue to attack Velyka Komyshuvakha and Barvinkove in order to further reach Sloviansk.

Fighting for Rubizhne and Popasna continues in Luhansk region. In addition, it became known that Russian troops captured the urban-type settlement of Novotoshkivske in the west of the region.

The shelling of the populated areas of the region continues. The head of the Luhansk Regional State Administration Serhii Haidai reported fires in residential buildings in Hirske, Lysychansk and Rubizhne. The Kreminna power substation was de-energized, leaving part of the region without electricity.

According to Serhii Haidai, an explosion occurred on the territory of the town hall of the temporarily occupied town of Kreminna, which resulted in the death of representatives of the Russian occupation forces.

In northern Donbas, Russian troops continue their offensive in the direction of Sviatohirsk and Lyman. In the central section of the front, they launch attacks near Avdiivka. In the south, attacks continue in the direction of Novomykhailivka and Marinka settlements. Massive shelling and blockades of Ukrainian military and civilians at the Azovstal plant in Mariupol are ongoing.

The Donetsk Regional Military Administration reports that at least 4 people (including 2 children in Lyman) were killed and 9 civilians were wounded as a result of shelling in the region during the day.

The General Staff of the Armed Forces of Ukraine reports an attempt by the Russian military to advance in the direction of Zaporizhzhia. On the morning of April 26, a missile strike was launched on the territory of the region.

The General Staff of the Armed Forces of Ukraine reports a concentration of Russian forces on the right bank of Kherson, which poses a threat in the Kryvyi Rih and Mykolaiv directions.

According to Vitalii Kim, chairman of the Mykolaiv Regional Military Administration, Mykolaiv was subjected to shelling during the Easter holidays. In addition, there was an unsuccessful attempted offensive by Russian troops near the city.

Maksym Marchenko, head of the Odesa Regional Military Administration, reports the launch of two missiles into the region from the temporarily occupied Crimea.

Russia keeps launching missile strikes on important railroad facilities. According to Serhii Borzov, head of the Vinnytsia Regional Military Administration, Russian troops shelled infrastructure facilities in Zhmerynka and Koziatyn. According to preliminary data from the Vinnytsia regional prosecutor’s office, 5 people were killed and 18 more were wounded.

The head of the Lviv Regional Military Administration, Maksym Kozytskyi, informed that missile strikes in Lviv region resulted in an explosion at the Krasne railway station.

According to Vitalii Koval, head of the Rivne Regional Military Administration, three missile strikes were carried out against the railway infrastructure in the Zdolbuniv district. As a result, about 20 nearby houses were damaged, 1 person was injured.

The Main Directorate of Intelligence of the Ministry of Defense of Ukraine states that the explosions in Tiraspol in Transnistria are a provocation by Russian special services, organized to justify the war with Ukraine or to involve the so-called “Pridnestrovian Moldavian Republic” (PMR) in military actions against Ukraine. Ukrainian intelligence has information that the leaders of the so-called PMR began preparing for such incidents a few days ago.

As of April 25, no agreement had been reached with Russian troops on the organization of humanitarian corridors from Azovstal in Mariupol. Minister for Reintegration of the Temporarily Occupied Territories Iryna Vereshchuk reported that Ukraine had asked UN Secretary General António Guterres to initiate and guarantee a humanitarian corridor through the facility. There are currently more than a thousand women, children and more than 500 wounded at the plant. Russian troops are storming the factory, where Ukrainian military and civilians are located, using aircraft, artillery, and tanks.

The UN Office of the High Commissioner for Human Rights has recorded 5,718 Ukrainian civilian casualties since the start of the large-scale invasion by the Russian Federation as of April 24. 2,665 people were killed and 3,053 were wounded. Prosecutor General Iryna Venediktova stated that according to the Ukrainian prosecutor’s office, as of April 25, 3,818 civilians were killed and more than 4,000 were wounded on the territory of Ukraine.

Satellite images showed signs of another mass grave near Mariupol. Trenches more than 200 meters long were observed in the village of Stary Krym, 5 kilometers from the city.

According to Vitalii Klitschko, head of the Association of Cities of Ukraine and Kyiv Mayor, the heads of two local communities — Ivan Senyk of Novouspenivka village council and  Ivan Malieiev of Kyrylivka village council — were released from Russian captivity.

The Russian military are forcing the residents of the Velyka Oleksandrivka urban-type settlement, located on the Kryvyi Rih direction in the Kherson region, to leave the settlement. In case of non-compliance with the order, they threaten a forced evacuation. Also, Kherson Mayor Ihor Kolykhaiev reports that the Russian military seized the building of the Kherson city council.

The press service of the National Bank of Ukraine reports that the Government has already raised about 45 billion hryvnias in equivalent from the sale of military bonds.

The Office of the President together with the Ministry of Justice has developed a mechanism for the recovery of Russian funds frozen abroad as compensation for the damage caused to Ukraine.

The press service of the British government informs that Britain has cancelled all duties and restrictions on Ukrainian exports under the free trade agreement, which should have been fully operational for Ukraine from 2023.

U.S. President Joe Biden has nominated a candidate for the post of U.S. Ambassador to Ukraine. He suggested that Bridget Brink, who heads the US embassy in Slovakia and was previously in charge of Eastern European affairs at the State Department’s Bureau for European and Eurasian Affairs, be appointed to this post.

Polish Prime Minister Mateusz Morawiecki confirmed the transfer of Polish tanks to Ukraine, noting that their number would not be announced for the safety of Ukrainian partners.

The CDU/CSU faction in the German parliament has drafted a resolution calling on the German government to transfer heavy weapons to Ukraine. It encourages other political parties to make a joint statement to that effect.

Denmark was the first to contribute to the Fund for the reconstruction of the war-torn Ukrainian energy infrastructure, established in early April 2022. It is expected that donors will mainly come from EU member states, as well as international companies and corporations.

The Azerbaijani state oil company SOCAR denied Russian information that it was allegedly ready to pay for Russian gas in rubles.

Russian Foreign Minister Sergei Lavrov said that the supply of Western weapons to Ukraine means that NATO is “essentially waging war with Russia” and pointed to “significant risks of nuclear war”.