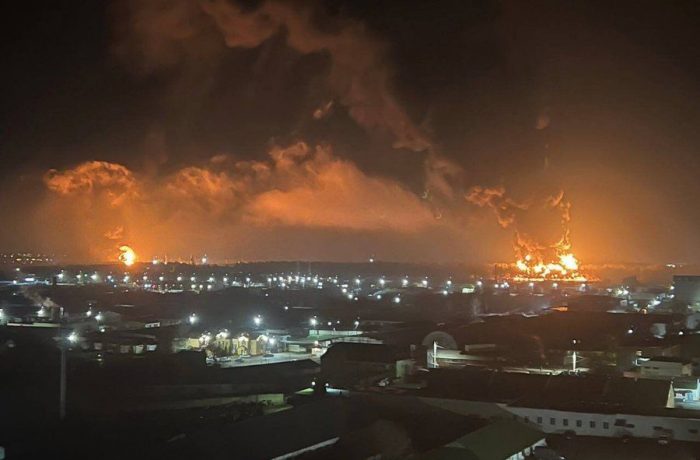 Russian troops are stepping up their offensive to encircle Ukrainian units in the Joint Forces Operation zone and reach the administrative borders of Luhansk and Donetsk regions. They succeeded in advancing near Izium and Lyman. Shelling continues in the east and south; missile strikes are carried out against infrastructure in Ukraine (Odesa, Kremenchuk).

According to the State Border Guard Service of Ukraine, the border village of Senkivka in Chernihiv Region was shelled on the evening of April 22. This is the fourth time that border guards have recorded the shelling of Chernihiv region from Russian territory since the liberation of the region from the Russian forces.

In Russia’s Bryansk, a fire broke out at an oil depot belonging to the state company Rosneft.

Fighting continues in the Kharkiv region. According to Oleh Syniehubov, head of the Kharkiv Regional Military Administration, the Armed Forces of Ukraine carried out a successful counterattack and liberated the settlements of Bezruky, Slatine, and Prudianka in the Derhachi district from the Russian occupation.

Fighting also continues near Izium. Russian troops are trying to advance in the direction of Barvinkove and Sloviansk. They are shelling Ukrainian Armed Forces positions near the settlements of Kurulka, Nova Dmytrivka, Virnopillia, and perform assault actions near Velyka Komyshuvakha. The General Staff of the Armed Forces of Ukraine recorded the concentration of additional Russian Army forces in the rear of the Izium grouping, near the town of Kupiansk.

In Luhansk region, Russian troops are concentrating their efforts to seize and contain Popasna and Rubizhne; they are preparing for an attack on Sievierodonetsk. The General Staff of the Armed Forces of Ukraine reports that a pontoon crossing over the Krasna River has been constructed to support it. Also, a part of the Popasna group of Russian troops has been recorded advancing northward into Sievierodonetsk.

Intensive shelling of the Luhansk region continues. On 23 April, 12 shelling of residential areas in Sievierodonetsk, Lysychansk, and the settlements of Hirske Community (Hirske and Zolote) was recorded. According to updated data, 6 people were killed and 2 were wounded in the latter. Also, a high-pressure gas pipeline was broken in Hirske Community.

Fighting continues on the front line of the Donetsk region. In its southern section, the Russian Federation troops intensified offensives in the direction of Kurakhove. Fighting is taking place in the areas of Marinka, Novomykhailivka and Velyka Novosilka. In the north of the region, the Russian military are advancing on Lyman. The General Staff of the Armed Forces of Ukraine reports that they have partially occupied the settlement of Zarichne. Shelling and artillery strikes also continue at the Azovstal plant in Mariupol.

According to the Donetsk Regional Military Administration, during April 23, at least 4 people were killed and 8 civilians were wounded in the region. On April 24, 2 children were killed as a result of shelling in Krasnohorivka (Ocheretyne community). On the same day, shelling killed 2 people in Novoselivka and 1 person in Novomykhailivka; at least 5 people in the region were wounded. Avdiivka was shelled from MLRS. Avdiivka cokechemical plant came under fire.

Fighting is ongoing on the territory of Zaporizhzhia region. The Russian military are concentrating their efforts in the area of Huliaipole. On April 23, the settlements of Zaliznychne and Staroukrainka were shelled there from MLRS. Shelling also continues in another part of the region, near the Dnipro River coast. On April 23, the Zaporizhzhia Regional Military Administration reported the deaths of 3 civilians in the village of Kamianske. On April 24, it was reported that Russian troops shelled Vasylivka.

Missile strikes continue in the Dnipropetrovsk region. On April 23, a rocket crashed on the outskirts of a village in the Dnipro district. On the night of April 23-24, a missile strike was fired on the Pavlohrad district of the region. The head of the Dnipropetrovsk Regional State Administration Valentyn Reznichenko reported damage to the railway infrastructure and industrial facilities; 1 person was killed.

Russian troops are shelling Ukrainian positions on the border of Kherson and Dnipropetrovsk regions, in the Kryvyi Rih direction. The head of the military administration of Kryvyi Rih, Oleksandr Vilkul, stated that the Russian military could launch an offensive on the city in the coming days.

In the evening of April 24, Russian troops launched missile strikes on the territory of Poltava region. The head of Poltava Regional State Administration Dmytro Lunin said that as a result of the attack the thermal power plant and the oil refinery in Kremenchuk were damaged — 1 person was killed and 7 were injured.

On April 23, the Russian military launched a missile strike on Odesa. The State Emergency Service of Ukraine reported that 6 people was killed (including a three-month-old baby) and 18 others were injured as a result of the rocket hitting a residential building.

Fighting continues near the administrative borders of the Kherson region. Operational Command “South” reports an attack on Russian troops concentrated in the area of ​​Kyselivka, which forced them to withdraw in the direction of Chornobaivka.

Minister for the Reintegration of the Temporarily Occupied Territories Iryna Vereshchuk declared that a humanitarian corridor from Mariupol had not been opened on April 23 and 24 because Russia had not provided a guarantee of a ceasefire.

Mariupol Mayor’s Adviser Petro Andriushchenko said that on April 23, Russian troops thwarted a plan to evacuate about 200 women and children from the city. Instead of taking civilians to the territory controlled by Ukraine, evacuation buses were sent by the Russian armed forces to the temporarily occupied territory of Dokuchaievsk, Donetsk region.

According to the data published on the website of the Ministry of Defense of the Russian Federation, since February 24, 951 thousand citizens of Ukraine have been deported to Russia. The Commissioner for Human Rights of the Verkhovna Rada of Ukraine Liudmyla Denisova notes the continuation of the deportation by the Russian side of civilians in Mariupol to the territory of the Russian Federation with their subsequent forced resettlement in remote regions of the country (including the Far East). The ombudsman also stated that Russia continues to hold Ukrainian prisoners of war in general regime colonies without converting prisons into special camps, in violation of the 1949 Geneva Convention.

The Ministry of Culture and Information Policy reports that at least 242 episodes of Russian military war crimes against cultural heritage have been documented in Ukraine.

Luhansk Regional Military Administration records damage to religious sites in the region as a result of shelling by Russian forces. At least seven Orthodox churches, an Islamic cultural center in Sievierodonetsk, and a prayer room for evangelical Baptists were affected.

Russian troops are conducting forced mobilization in the temporarily occupied territories of Kharkiv, Zaporizhzhia and Kherson regions. The Main Intelligence Directorate of the Ministry of Defense of Ukraine reports that in the Kharkiv region, medical workers are forcibly sent to the front line to provide medical care to Russian wounded. According to Ombudsman Liudmyla Denisova, in the Zaporizhzhia region, Russian servicemen and Federal Security Service officers are looking for conscripts to replenish combat units. In order to ensure mobilization measures, Russian troops have completely blocked the possibility of leaving the Kherson region for the territories controlled by Ukraine.

Prime Minister of Ukraine Denys Shmyhal indicated the government had already paid $1.1 billion to entrepreneurs who applied for financial assistance (6.5 thousand UAH per person) under the program “eSupport”.

First Deputy Minister of Agrarian Policy Taras Vysotskyi noted that the war in Ukraine has already affected about 25% of world grain trade and led to rising world prices, food inflation and reduced access to food in Ukraine and Russia.

For the first time in history, the Chairman of the National Bank of Ukraine was invited to a meeting of the General Council of the European Central Bank.

On April 23, President of Ukraine Volodymyr Zelenskyi had a telephone conversation with the Prime Minister of the United Kingdom Boris Johnson. The parties discussed pressing issues of countering Russian aggression. Zelenskyi expressed gratitude for the UK’s defense support and macro-financial assistance. In turn, Johnson said he was ready to continue to support Ukraine’s defense capabilities and help gather evidence of Russian war crimes. The Prime Minister of the United Kingdom also promised that his country plans to return its embassy to Kyiv in the near future.

On April 24, US Secretary of State Anthony Blinken and US Secretary of Defense Lloyd Austin paid a working visit to Ukraine. They met with President of Ukraine Volodymyr Zelenskyi to discuss military assistance and the supply of weapons needed by the Ukrainian army. In particular, it became known that the United States has allocated funding for the military needs of Ukraine and 15 allied states in the amount of $713 million, of which about half ($322 million) are allocated to the Ukrainian side.

In addition, Shmyhal and Polish Prime Minister Mateusz Morawiecki signed a Memorandum on strengthening cooperation between the two countries in the railway sector. In particular, it is a question of development in the near future of the joint logistic enterprise of two countries. This will significantly increase the volume of rail transportation of Ukrainian exports to the EU and other international markets.

The United Nations Crisis Coordinator for Ukraine Amin Awad called for an immediate end to hostilities in Mariupol to evacuate civilians, including women, children and the elderly.