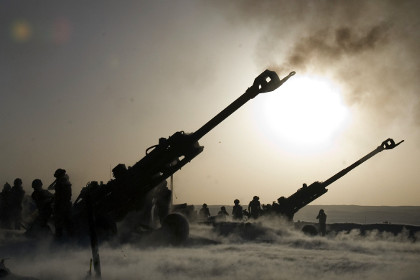 Fighting continues on the front lines in the east (Luhansk and Donetsk regions) and south (Zaporizhzhia and Kherson regions) of Ukraine. The Russian military command announced the goals of the organized offensive — to establish “full control over Donbass and Southern Ukraine” to create a land corridor to Crimea and Transnistria.

The partial blockade of Kharkiv continues. Russian troops continue shelling residential areas of the city. During the day, they carried out 56 strikes from artillery, MLRS and mortars on the territory of the Kharkiv region. As a result of the shelling, 2 civilians were killed and 19 more civilians were injured (7 of them in the city of Kharkiv).

Russian troops continue their offensive near Rubizhne. In addition, serious positional battles are taking place in the direction of Popasna and Novotoshkivske. According to the head of the Luhansk Regional Military Administration, Serhii Haidai, during April 21, the Russian military shelled Luhansk region 11 times (Sievierodonetsk, Lysychansk, Popasna, Rubizhne, and Hirske community). 4 people were wounded as a result. Later, Haidai stated that the Russian military broke a high-voltage line in Sievierodonetsk, causing the city to be completely de-energized once again.

Fighting continues along the entire front line in the Donetsk region. The General Staff of the Armed Forces of Ukraine reports attempts by Russian troops to advance in the direction of Sloviansk, Kurakhove and Avdiivka. In Mariupol, shelling and bombing of the Azovstal plant territory, where Ukrainian units are blocked, is ongoing. In the north of the region, Russian troops are concentrating their forces near the village of Zelena Dolyna, which is under their control. Ukrainian troops have also withdrawn in this direction from the village of Lozova. In the vicinity of Donetsk, fighting near Marinka continues.

The Russian army shelled the regional trauma hospital in Lyman (Donetsk region). Pavlo Kyrylenko, head of the Donetsk Regional Military Administration, reports that the shelling was carried out from Uragan MLRS.

Vadym Liakh, head of the Sloviansk military administration, reports that Russian troops shelled the city during the night.

In total, according to the Donetsk Regional Military Administration, Russian troops shelled 20 populated areas (including Oleksandrivka, Svitlodarsk, and Dobropillia) during the day. 34 civilian objects were damaged. At least 3 civilians were killed as a result of the shelling (in Marinka, Zelene Pole, and Novosilka Druha) and 7 people were injured.

Ivan Arefiev, spokesman for the Zaporizhzhia Regional Military Administration, informed that Russian troops are trying to advance deep into the region in the direction of Zaporizhzhia. The General Staff of the Armed Forces of Ukraine reports an attempted attack in the direction of the Zelene Pole village. Also, Russian troops continue shelling nearby villages near Huliaipole.

In order to create favorable conditions for an offensive in the direction of the city of Mykolaiv, Russian troops are shelling Ukrainian positions near the border of Kherson and Mykolaiv regions. The General Staff of the Armed Forces of Ukraine reports that the Russian air defense system in this direction has been reinforced by the deployment of a battery of S-300VM air defense systems near Skadovsk.

Minister for Reintegration of the Temporarily Occupied Territories Iryna Vereshchuk reported that humanitarian corridors were not opened due to the danger on the routes on April 22.

The Office of the UN High Commissioner for Human Rights, as of the end of the day on April 21, recorded 5381 civilian casualties in Ukraine as a result of the aggression of the Russian Federation (2435 people were killed, 2946 were wounded).

Juvenile prosecutors report that more than 594 children were injured in Ukraine. As of the morning of April 22, the official number of dead children had not changed (208), but the number of injured children had increased (386).

Mariupol city authorities received information about another mass grave in the village of Vynohradne, a mass grave measuring 45 by 25 meters, where Mariupol residents killed by the Russian military might be buried.

Kyiv region police chief Andrii Niebytov indicated that law enforcers found the bodies of 1,084 civilians in the liberated territories of the region. Up to 75% of these people were killed with small arms, which demonstrates the crimes of the Russian military against civilians.

Michelle Bachelet, UN High Commissioner for Human Rights, stated that there is ample evidence of war crimes committed by Russian troops in Ukraine. They include indiscriminate shelling, bombing of settlements, and executions of civilians in the temporarily occupied territories. The actual scale of the crimes is still being clarified. UN officials documented the killing of about 50 civilians during their mission to Bucha. Almost every resident of Bucha with whom they spoke described the death of a relative, a neighbor, or even a stranger. It is emphasized that Bucha is not a unique case, similar crimes could have been committed in other places in the Kyiv, Chernihiv, Kharkiv, and Sumy regions, which were under the control of Russian forces in February and March.

The Verkhovna Rada Commissioner for Human Rights, Liudmyla Denisova, reported that Ukrainian prisoners of war released as part of the exchange described humiliation and inhumane conditions of detention. They were kept in a place with sub-zero temperatures, as a result of which they received frostbite on their hands and feet; in addition, the captives were not fed.

Minister of Internal Affairs Denys Monastyrskyi reported that during the war, rescuers extracted over 1200 people from under the rubble; deactivated over 70 thousand explosive objects; together with the authorities and volunteers ensured the evacuation of over 300 thousand people from dangerous regions.

The United States will provide additional direct financial assistance to Ukraine in the amount of $500 million. The funds will go to the state budget in the form of grant aid to stabilize the economy and ensure protected expenditures in wartime – salaries, pensions, social benefits.

According to Prime Minister Denys Shmyhal, the Organization for Economic Cooperation and Development (OECD) intends to open a regional office in Kyiv.

According to the Deputy Head of the Office of the President Rostyslav Shurma, Ukraine has practically returned to the pre-war level of stocks of basic products.

According to the statistics of the platform for working with open data Opendatabot after February 24, 2022 in Ukraine registered more than 10 thousand individual entrepreneurs and more than 1,200 companies (as of April 22).

During a working visit to Washington, Prime Minister Denys Shmyhal and US Secretary of Defense Lloyd Austin discussed the importance of continuing Ukraine’s military and financial support to strengthen the country’s defense capabilities in the face of the Russian invasion. The head of the Ukrainian government met with US Secretary of Transportation Peter Buttigieg and discussed the possibility of restoring Ukraine’s infrastructure and logistics routes. The meeting with Denys Shmyhal and US Secretary of Commerce Gina Raimondo also took place, during which the parties discussed the development of bilateral trade, reduction of trade barriers and strengthening sanctions against Russia.

Denys Shmyhal also met with Deputy Prime Minister and Minister of Finance of Canada Chrystia Freeland in the United States, thanking the Canadian people for their financial and military assistance. During the meeting, further support for Ukraine in the fight against the Russian invasion was discussed.

The Minister for Foreign Affairs of Ukraine Dmytro Kuleba met with the Prime Minister of Romania Nicolae Ciucă. The parties discussed the development of trade, energy and infrastructure cooperation, focusing on ways to diversify Ukrainian export routes.

The President of the European Council Charles Michel had a telephone conversation with the President of the Russian Federation. He called on Putin to open humanitarian corridors to Mariupol. A similar call is contained in a statement by the EU High Representative for Foreign Affairs and Security Policy, Josep Borrell.

Ukraine’s military support from international partners is growing. US Deputy Secretary of State for Political Affairs Victoria Nuland said that the United States is already supplying Ukraine with multiple launch rocket systems (MLRS). Canada and the United States also handed over 4 M777 howitzers and ammunition to the Armed Forces of Ukraine. France is ready to supply Ukraine with a batch of Milan anti-tank missiles and Caesar self-propelled howitzers. Belgium also declares its readiness to supply arms.

German Minister of Development and Economic Cooperation Svenja Schulze said that Germany plans to provide Ukraine with 37 million euros for the reconstruction of destroyed infrastructure and homes for internally displaced persons during the Russian invasion.

Australia has expanded the list of Russian citizens against whom sanctions have been imposed. It includes 147 people (144 senators of the Federation Council of the Federal Assembly of Russia for supporting the illegal recognition of the independence of the so-called pseudo-republics in Donetsk and Luhansk regions of Ukraine, as well as the daughters of Vladimir Putin and Sergei Lavrov).

The head of the Ukrainian delegation to the talks with Russia, Davyd Arakhamiia, confirmed that a new round of talks between representatives of Ukraine and Russia took place online on April 21-22.