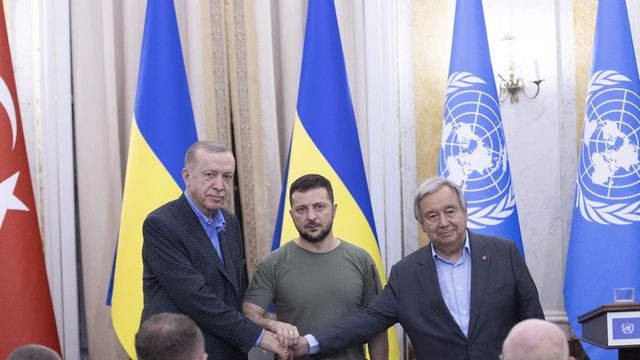 Active hostilities are ongoing in Donbas, where Russian forces are trying to seize Avdiivka and Bakhmut. They are carrying out offensive operations in the southern direction in order to strengthen their positions around Kherson. The Ukrainian Armed Forces are striking at Russian military facilities in temporarily occupied territories, primarily the Kherson region and Crimea. For their part, Russian troops continue the indiscriminate shelling of Ukrainian territory.

Active hostilities are recorded near Avdiivka, where Russian troops are trying to break through the AFU defenses. There is an attack by Russian troops on Bakhmut from the eastern and southern directions. Local attacks are taking place northwest of Sloviansk.

Systematic shelling continues along the front line, destroying housing and civilian infrastructure. Two educational institutions were damaged as a result of the strike on Kramatorsk. Between 18 and 21 August, 18 people were killed and 25 civilians were wounded in the Donetsk region. The Ukrainian military strikes warehouses and bases in temporarily occupied territories to counter Russian operations.

In the Kharkiv direction, Russian troops are trying to hold the occupied positions and restore the combat efficiency of the units that suffered losses. Local attacks were recorded to the north of Kharkiv.

Shelling of the regional center persists. On the night of August 19, a higher education building in the city was destroyed, with 1 person killed. The following night rocket attacks on critical infrastructure were recorded.

The casualties from the large-scale shelling of the city on August 17-18 are also being counted. According to the latest data, 24 people were killed and 42 more were wounded.

The Ukrainian Armed Forces are striking military facilities that support the operations of the Russian Armed Forces. On August 18, a fire was recorded at an ammunition depot in Russia’s Belgorod region, presumably as a result of shelling or a UAV attack.

The front line remains stable. Intense shelling is taking place along it. During the night of 18 August, Russian shelling damaged infrastructure facility in Zaporizhzhia, killing 1 person and injuring 3 others. In the morning of 19 August, the town of Orikhiv was subjected to serious shelling. On the same day, 3 civilians (including 1 child) were injured near Zaporizhzhia.

For their part, the AFU shelled Russian military facilities in the Zaporizhzhia direction. On the night of August 20, a strike was launched against a Russian base near the Melitopol airfield.

During the day of August 18, 1 person was killed and 2 were wounded on the territory of Mykolaiv. On the night of August 19, a rocket attack damaged 16 residential buildings and injured 2. Once again, the building of the Petro Mohyla Black Sea National University was hit. Other towns in the region were also the targets of attacks. On August 20, because of the shelling of the town of Voznesensk, according to preliminary data, 12 to 14 civilians (including 4 children) were wounded.

At least 1 civilian was killed as a result of shelling in the Kryvyi Rih direction on August 19. On August 21, 1 more person was killed and 6 were wounded in the area.

In recent days, explosions were recorded in temporarily occupied Crimea – near Kerch, in the area of Belbek military airfield near Sevastopol, in Sevastopol itself, near Yevpatoriia and Bakhchysarai. Russian sources report the operation of an air defense system. On August 20, a UAV crashed down on the headquarters building of the Russian Black Sea Fleet in Sevastopol. Thus, there is an increase in the activity of the AFU in reconnaissance and target engagement on the territory of the Crimean peninsula. Apparently, such activities are aimed at identifying Russian air defense positions, which can be used in future strikes on military facilities of the Russian Federation with high-precision weapons.

In addition, the Armed Forces of Ukraine carried out further strikes on the infrastructure of Russian troops in Nova Kakhovka (Kherson region).

Rocket attacks on the territory of Ukraine continue. However, the Ukrainian air defence shows high efficiency. For example, on August 20, four rockets were shot down near the city of Dnipro.

On the night of August 21, a missile strike was carried out in the Odesa region. Two of the five missiles were shot down by Ukrainian air defense; the others hit an agricultural enterprise.

Russian troops shelled the territory of the Nikopol district (Dnipropetrovsk region). At least 4 civilians have been wounded here in recent days.

Shelling of the border areas of Chernihiv and Sumy regions is ongoing.

The Security Service of Ukraine exposed a clandestine server center in Kyiv, that had been used by Russian hackers to attack Ukrainian state authorities on the Internet.

According to the Office of the Prosecutor General, as of the morning of August 21, the number of children affected by the armed aggression of the Russian Federation in Ukraine increased to 1,094 (373 children killed, 721 injured). According to the government platform Children of War, as of August 20, 6,950 children had been deported and 222 were missing.

The Security Service of Ukraine stated that only one in 20 Russian missile strikes targets a military facility, while others hit civilian infrastructure: residential buildings, schools, hospitals, and universities.

According to data revealed in a journalistic investigation by the British charity Action on Armed Violence, Russia has been responsible for the highest number of explosive-type weapons in urban residential areas since 2010.

Deputy Prime Minister for Reintegration of the Temporarily Occupied Territories of Ukraine Iryna Vereshchuk indicated that as of August 19 over 21 thousand people had been evacuated from the temporarily occupied territories of Kherson, Kharkiv, Zaporizhzhia, Donetsk, Luhansk regions and Crimea. Almost one third of the evacuees were children.

The Center for National Resistance stated that the occupation administration plans to start the school year in Kherson region following the Russian curriculum. Parents who do not agree to educate their children in Russian schools are threatened with eviction, confiscation of property, and fines.

The United Nations initiates a mission to investigate the terrorist attack in occupied Olenivka that killed Ukrainian prisoners of war. According to Mykhailo Podoliak, Advisor to the Head of the Office of the President of Ukraine, international organizations led by the International Committee of the Red Cross should mediate in all armed conflicts and ensure compliance with international conventions. However, the official believes that their reaction to the murder of Ukrainian prisoners of war in Olenivka was not sufficient.

Russian media report about an attempt on the life of the head of the occupation administration of Mariupol, Kostiantyn Ivashchenko. According to them, an explosive device was found near the city zoo, towards which he was heading. Partisan operations also continue in the city of Melitopol (Zaporozhzhia region).

According to the Minister of Economy Yuliia Svyrydenko, due to the war unleashed by the Russian Federation against Ukraine the real GDP of Ukraine may fall by 35-40% by the end of 2022. It is worth noting that the forecast of the Ministry of Economy is even more pessimistic than the projection made by analysts of the National Bank of Ukraine made in late July.

The Cabinet of Ministers allowed employees of export-oriented companies to travel abroad starting September 1, 2022. Thus, the government aims to ensure the improvement of business activity in Ukraine.

The Ministry of Finance reported that in July the expenditures of the general fund of the state budget amounted to UAH 174.9 billion. Of these, 62 billion were allocated for military salaries, which is more than a third of the entire budget.

Ukrainian President Volodymyr Zelenskyi visited Lviv on 18 August, where he met with Turkish President Recep Tayyip Erdoğan and UN Secretary-General António Guterres. During the talks, Zelenskyi and Erdoğan discussed practical aspects of the development of the Ukrainian-Turkish partnership and prospects for the settlement of the Russian-Ukrainian war. During the visit, Ukrainian Infrastructure Minister Oleksandr Kubrakov and Turkish Trade Minister Mehmet Muş signed a Memorandum of Understanding Concerning Infrastructure Recovery, providing for Turkish participation in the post-war reconstruction of our country. Zelenskyi also met with António Guterres. Later the presidents had a trilateral meeting with the UN Secretary-General. As a result, the sides coordinated actions on the functioning of the grain corridor, the safety of the Zaporizhzhia nuclear power plant, and the release of Ukrainian prisoners. Ukrainian Foreign Minister Dmytro Kuleba stressed that during the meeting no one had been trying to persuade Ukraine to make concessions in favor of Russia.

U.S. President Joe Biden, French President Emmanuel Macron, German Chancellor Olaf Scholz, and British Prime Minister Boris Johnson on August 21 discussed the nuclear security situation in Ukraine amid the shelling of the Zaporizhzhia NPP area, while reiterating their support for Kyiv in the war launched by Russia. During the call, the four leaders also called for the rapid dispatch of IAEA inspectors to the site.

International partners continue to support Ukraine in its fight for independence and territorial integrity. The United States, according to President Biden’s executive order, has allocated a new $775 million military aid package to Ukraine. The Armed Forces will receive HIMARS ammunition, howitzers, drones, mine-resistant armored vehicles, high-speed anti-radar missiles, anti-tank guided missiles, and other equipment. Secretary of State Anthony Blinken pointed out that Ukrainian troops are effectively using previously provided weapons to defend their country, so the United States will continue to support Ukraine in its war with Russia. At the same time, it is noted that the total amount of U.S. security assistance allocated to Ukraine, taking into account the latest package, is about $10.6 billion. Meanwhile, the German government is transferring three more Gepard self-propelled air defense systems, 11 M113 armored personnel carriers and other weapons to Ukraine. On August 18, the Estonian government approved another military aid package to Ukraine, under which the country will transfer more weapons, including mortars and anti-tank weapons. On August 20, Lithuanian Defense Minister Arvydas Anušauskas also announced that two new military aid packages to Ukraine were being prepared.

European Union countries continue discussing a proposal to completely ban the issuance of Schengen visas to Russian citizens. So far, there has been neither coordination nor a common position on this issue. Visa restrictions were supported by the Baltic States, Eastern and Northern Europe, including Estonia, Denmark, the Czech Republic and Finland. Germany, Cyprus, Greece and Portugal oppose the idea of visa ban for the Russian tourists. This question will be considered in Prague at the official meeting of foreign ministers of the European Union on August 31.