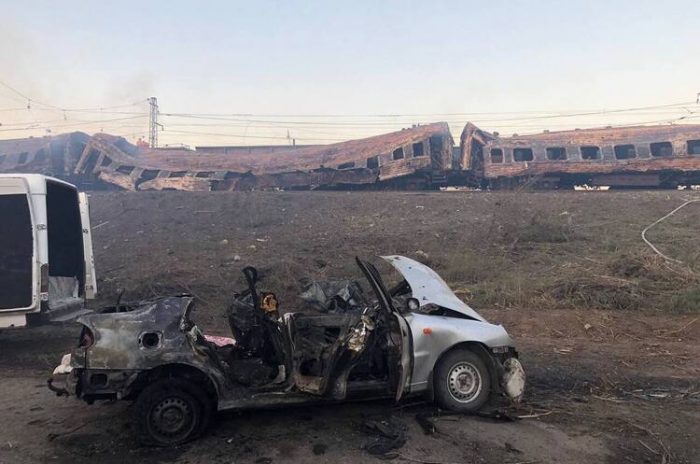 Russian troops carry on offensive operations in Donetsk region, while in other directions the situation remains unchanged. In order to disrupt possible counteroffensive operations by the Armed Forces of Ukraine in the south, the Russian troops are launching local attacks. Regular shelling along the front line and rocket attacks on Ukraine’s civilian infrastructure continues. Their number increased significantly on August 24, Ukraine’s Independence Day, when a record number of 189 air raids were announced across the country.

Russian forces continue to concentrate their efforts in the Avdiivka and Bakhmut directions. Despite some local successes, they are unable to break through the Ukrainian defenses.

In such conditions, intensive shelling along the front line persists. As a result of the actions of the Russian military on the territory of the Donetsk region in recent days, at least 5 people were killed and 10 were wounded.

The Ukrainian Armed Forces are retaliating by striking at military facilities in the temporarily occupied territories.

Russian troops are on the defensive in the Kharkiv direction and keep shelling the city. At least 7 civilians have been injured as a result of their actions in the region in recent days.

On August 23, a fire broke out at an ammunition depot used for shelling in the Kharkiv region in the Russian Federation’s Belgorod region.

Constant shelling along the front line is ongoing. In the morning of August 24, missile strikes were launched against Zaporizhzhia. Civilian infrastructure of the city was damaged as a result.

In the Kherson region, the AFU are striking military facilities and transport infrastructure used by the Russian Armed Forces. Among other things, the Kakhovskyi Bridge and  Antonivskyi Bridge in Kherson were damaged. It is not yet possible to fully use the latter to support the Russian grouping on the right bank of the Dnipro River. To rectify the situation, the Russian military is trying to build a pontoon crossing in the area.

On August 22, a missile strike was launched against an infrastructure facility in Odesa region.

On August 23, the Russians launched a missile strike against Dnipro. On the night of August 24, the Dnipro district of the region was struck. In the evening of August 24, missile attacks were carried against the strategically important Chaplyne railway station. A train was hit; according to preliminary reports, 25 people were killed and about 50 injured as a result of the attacks.

On August 24, four missiles struck military infrastructure, including an airfield, in the town of Myrhorod in the Poltava region. A missile strike was also carried out in Khmelnytskyi region. Two missile strikes were carried out in the Vyshhorod district of the Kyiv region.

Ukrainian air defenses managed to shoot down some of the missiles. For example, on August 24, one missile was destroyed over the Cherkasy region; in addition, enemy objects – probably UAVs – were shot down over the Chernihiv and Vinnytsia regions.

New shelling of the border areas of Chernihiv and Sumy regions was recorded.

Russian special services are trying to discredit Ukraine by accusing it of using terrorist methods of fighting. The Russian Federal Security Service holds Ukrainian security forces accountable for the murder of the daughter of Russian Kremlin policy ideologist Alexander Dugin, Daria, who was killed in a car explosion on August 20. This could be used to continue anti-Ukrainian propaganda and distract the population from possible domestic political instability in Russia. The Ukrainian side denies all accusations.

The Office of the UN High Commissioner for Human Rights has updated civilian casualty figures from the full-scale Russian invasion of Ukraine. As of August 22, the confirmed casualties are 1,477 (5,587 dead, 7,890 wounded). According to the Office of the Prosecutor General, as of the morning of August 24, as a result of the armed aggression of the Russian Federation in Ukraine, the number of affected children increased to 1,097 (374 children killed, 723 wounded). According to the government platform “Children of War,” as of August 24, 7,013 children had been deported, and 225 were missing.

Valerii Zaluzhnyi, Commander-in-Chief of the Ukrainian Armed Forces, voiced approximate figures for Ukrainian army losses during the Russian-Ukrainian war. According to his data, since February 2022, about 9,000 Ukrainian soldiers have been killed at the front.

The Spokesperson for the UN High Commissioner for Human Rights, Ravina Shamdasani, expressed concern about any possible trials of Ukrainian prisoners of war. It is also noted that independent observers have mostly no access to Ukrainian prisoners of war who may be subjected to torture. The speaker called for full access of independent observers to all persons detained by the Russian Federation during the armed conflict.

The Russian occupation administration is taking steps to strengthen their positions in the temporarily occupied territories. In Zaporizhzhia region, pensioners and beneficiaries can receive payments only if they receive a Russian passport. This requirement is a war crime. The NGO Center for National Resistance stated that in this way the occupation authorities are trying to increase the rate of passportization of the local population.

The World Health Organization reported more than 473 attacks on medical infrastructure in Ukraine since the start of the full-scale invasion.

According to the Ukrainian Ministry of Education and Science, 261 educational institutions have been destroyed and more than 2,000 have been damaged since the full-scale war began.

Ministry of Agrarian Policy and Food of Ukraine notes that against the backdrop of the decline in the performance of other sectors, agriculture accounts for about 30-35% of the Ukrainian economy (in the prewar period it accounted for 20%). In addition, the Ministry stresses that for 22 days since the beginning of the “grain corridor” 33 ships with 719,549 tons of agricultural products have left Ukrainian seaports. During 15 days of August Ukraine exported 2 million tons of products, while in July it exported about 3 million tons (most of the cargoes were exported during the last week of July due to the opening of grain routes via the Black Sea).

International partners continue to support Ukraine financially. In particular, according to Finance Minister Serhii Marchenko, by Ukraine’s Independence Day, the U.S. will provide $3 billion to the state budget in the form of a non-refundable grant through the World Bank mechanism. The Netherlands will also provide Ukraine with more than €65 million in aid to begin the reconstruction of war-torn regions. In particular, the funds will also be spent on restoration of infrastructure, support for Ukrainian small and medium-sized businesses, demining of territories, etc.

On August 23, Ukraine hosted the second summit of the Crimean Platform in the online format, which was attended by representatives of about 60 countries, who condemned the annexation of the peninsula by Russia and noted the importance of restoring the territorial integrity of Ukraine. Polish President Andrzej Duda, who personally arrived in Kyiv on August 23, stressed the need to liberate the entire territory of Ukraine along with Crimea, and advocated the complete dismantling of Nord Stream-2. German Chancellor Olaf Scholz, French President Emmanuel Macron, and Italian Prime Minister Mario Draghi said that the international community would never recognize Russia’s imperialist and illegal annexation of Ukrainian territory and stressed that it was Russia that was responsible for the food crisis and its consequences for the world. Ukrainian President Volodymyr Zelenskyi pointed out at the summit that the return of Crimea to Ukraine would be the biggest anti-war move in Europe, and that Ukraine is already strong enough to liberate the peninsula.

President Volodymyr Zelenskyi also held a meeting with British Prime Minister Boris Johnson, who, despite the heightened danger, arrived in the capital on the occasion of Ukraine’s Independence Day. During the meeting, they discussed Ukraine’s defense needs, the situation at the Ukrainian nuclear power plant, the treatment of Ukrainian prisoners of war, and the reconstruction of war-torn cities. In addition, Boris Johnson announced a new £54 million aid package, including unmanned surveillance systems and anti-tank ammunition. Also visiting Kyiv was Portuguese Foreign Minister João Gomes Cravinho, with whom Zelenskyi discussed humanitarian aid and post-war reconstruction of Ukraine.

The UN Security Council held a meeting on August 23 on security at the seized Zaporizhzhia nuclear power plant, which was convened by Russia to bring charges against Ukraine for allegedly committing provocations at the plant. However, most participants of the meeting did not support the Russian position and condemned its actions at the site.

On August 24, the UN Security Council held a meeting on the consequences of Russia’s war against Ukraine. Speaking online, President Volodymyr Zelenskyi announced that Ukraine would submit to the 77th session of the United Nations General Assembly a resolution on holding the Russian Federation accountable for the crime of aggression. He also focused on the threat to the world posed by Russia’s actions at the Zaporizhzhia NPP. Zelenskyi insisted that the IAEA mission take the situation at the facility under permanent control as soon as possible.

Partner states continue to provide military and financial assistance to support Ukraine in defending its territories and carrying out an effective counterattack. On August 24, U.S. President Joe Biden announced the largest tranche of security assistance: about $2.98 billion in weapons and equipment to be provided through the Ukraine Security Assistance Initiative. This will provide Ukraine with air defense systems, artillery systems, ammunition, drones, and radars to strengthen its defense against Russia in the long term. Overall, since January 2021, Ukraine has received $13.5 billion in military aid from the U.S. In addition, Norway and the United Kingdom will jointly purchase Norwegian Black Hornet micro drones for Ukraine worth NOK 90 million. The drones are used for reconnaissance and identification of hostile targets. Slovakia plans to transfer 30 BMP-1 infantry fighting vehicles to Ukraine in exchange for deliveries of 15 Leopard 2 tanks from Germany.

Foreign Policy and Security Advisors to the heads of state and government of Estonia, Latvia, Lithuania, Poland, Romania, Slovakia, and Hungary held the first meeting of the new Kyiv Initiative project, a platform for coordinating efforts to help Ukraine. Participants discussed countering the Russian threat and Ukraine’s key needs to do so, as well as further sanctions pressure on Russia. It is planned to hold such meetings regularly in the format of videoconferences with the constant involvement of new members.

The Canadian government is expanding sanctions against Russia. The sanctions list will include 62 more people and one more company in the defense sector, which are involved in the war against Ukraine. It is noted that among those put on the sanctions list are Russian government officials, including governors and heads of regional administrations, their family members, as well as the heads of defense enterprises.