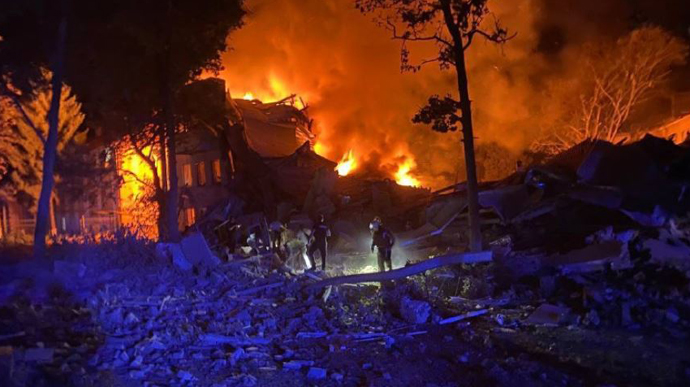 Russian troops continue attacks in Donetsk region – in Avdiivka and Bakhmut directions. Considerable Russian forces remain in the south of Ukraine to counter the expected counterattack by the Armed Forces of Ukraine. This is the direction that will be a priority for the parties to the conflict in the coming weeks. Ukrainian artillery has been carrying out intensive strikes against Russian military facilities, which are used to support and sustain the Russian army. Several explosions at military facilities in Crimea have demonstrated the AFU’s ability to hit targets at a considerable distance from the front line. Daily shelling in Kharkiv and Mykolaiv regions resulted in a significant increase in civilian casualties.

The most intense fighting is taking place near Donetsk. Russian forces are trying to push the AFU away from the western outskirts of the city and threaten the Ukrainian grouping in Avdiivka. They also continue their offensive in the Bakhmut direction, carrying out assault actions near Soledar. Local attacks by Russian troops were recorded to the north of Sloviansk.

Systematic shelling along the front line continues. Between 15 and 17 August, 6 people were killed and 15 civilians were wounded in the Donetsk region.

The Ukrainian Armed Forces are striking at the military infrastructure of Russian troops in the temporarily occupied territories. Serhii Haidai, head of the Luhansk Regional Military Administration, reports a strike on a military facility in Lysychansk. According to him, losses of Russian troops may reach several dozen people.

In the Kharkiv direction, Russian troops hold previously occupied positions. It remains a secondary direction for them, yet the Russian military does not give up local attacks and assault actions to the north of Kharkiv.

Russian forces continue to actively use assault aircraft in addition to missile and artillery weapons to attack civilian infrastructure. They continue their constant shelling of Kharkiv and communities near the regional center.

On the night of August 16, one of the most massive shelling of the city occurred. According to the head of the Kharkiv Regional Military Administration Oleh Syniehubov, five of the city’s nine districts came under artillery strikes. In total, during the previous day 1 person was killed in the city and 8 were wounded.

In the evening of August 17, the Saltivskyi district of Kharkiv was shelled once again. As a result of a shell hitting a dormitory where people with hearing impairments lived, at least 7 people were killed; 20 were wounded. As of the morning of August 18, Russian troops shelled the Kholodnohirskyi and Slobidskyi districts of the city. According to preliminary reports, at least 5 people were wounded.

In the Zaporizhzhia direction, shelling continues along the line of contact. Explosions were recorded near the town of Enerhodar in the vicinity of the Zaporizhzhia NPP. The Russian military also shelled the town of Orikhiv, where 1 person was killed and 6 were wounded.

The most resonant success of the Ukrainian military was strikes against Russian military facilities on the territory of temporarily occupied Crimea. On August 16, there were explosions at an ammunition depot near Dzhankoi; a neighboring railroad and an electrical substation were also damaged. In addition, explosions were recorded at an airbase in the Simferopol district of Crimea. Both facilities are of strategic importance. Dzhankoi is the logistical “gateway of Crimea,” so ammunition depots near the city play an integral role in supplying the Russian contingent in the Kherson region. Airfields on the peninsula are used to provide it with air support. The strikes on these facilities demonstrated the AFU’s ability to hit targets far away from the front line and caused panic in Crimea.

On August 16, a military airfield in the Zhytomyr region was hit. According to information from Air Command “Center”, the airstrip and several pieces of vehicle equipment were damaged. It is highly likely that these strikes can be interpreted as retaliation for the bombing of Russian troops’ airfields in Crimea.

Systematic shelling of the Nikopol and Kryvyi Rih districts of Dnipropetrovsk region by cannon and rocket-launching artillery continues. 4 civilians were injured as a result of the August 16 shelling in Nikopol. On the night of August 18, another person was wounded in the city.

In the morning of August 17, the Russian military attacked a residential area and a recreation center in Odesa region with missiles. 4 civilians were wounded as a result.

Systematic shelling of the border areas of Sumy and Chernihiv regions with the use of mortars and artillery is ongoing.

The Office of the UN High Commissioner for Human Rights has updated data on civilian casualties resulting from the full-scale Russian invasion of Ukraine. As of August 15, the confirmed casualties are 13212 (5,514 dead, 7,698 wounded). According to the Office of the Prosecutor General, as of the morning of August 17, as a result of the armed aggression of the Russian Federation in Ukraine, the number of injured children increased to 1073 (361 children killed, 712 wounded). These figures are not final, as they do not take into account the situation in the zone of active hostilities and in the temporarily occupied territories.

According to the Ministry of Reintegration, residents of Ukraine in the temporarily occupied territories boycott the so-called “referendums” and passportization initiated by the Russian side. Only a few thousand citizens from the occupied Kherson and Zaporizhzhia regions, i.e. less than 1% of the total adult population, have received Russian passports in all the time.

Human Rights Watch states that during the shelling of Kharkiv, Ukraine’s second largest city, Russian troops repeatedly violated the laws of war. All of the shelling documented by the organization took place in densely populated areas, using explosive weapons with a large kill zone, including cluster munitions banned in many countries, and therefore may qualify as violations of international humanitarian law or the laws of war. As a result of this shelling, 1,019 civilians, including 52 children, were killed in the Kharkiv region; 1,947 civilians were wounded, including 152 children. In seven cases out of eight, Human Rights Watch experts did not find any military targets near the place of shelling.

According to Enerhoatom, the Russian military shelled the Zaporizhzhia nuclear power plant again on August 15, increasing the risk of hydrogen leaks and radioactive dispersal.

In temporarily occupied Mariupol, the Russian military continues to prevent civilians from evacuating to Ukrainian-controlled territory. To do so, people are forced to undergo so-called filtration, with queues exceeding 1,000 people. It is impossible to leave the city without a certificate of filtration.

There is a resistance movement in the temporarily occupied territories. In recent days, there have been several explosions in Melitopol, in particular near the occupation commandant’s office of Russian troops. As a result of explosions in another location, the broadcasting of over-the-air television, which was used by Russian troops for propaganda purposes, was interrupted.

Canada will provide Ukraine with 450 million Canadian dollars (about UAH 13 billion) to buy gas for the heating season. According to the plans of the Ukrainian government, Ukraine should have 19 billion cubic meters of gas in its underground storage facilities by October 1, 2022, which requires spending about UAH 150 billion.

According to the State Statistics Service, in the first half of 2022, exports from Ukraine were 24% lower than last year. At the same time, imports decreased by 19.1%, and the negative balance of trade was more than twice as much as in the first half of 2021. In addition, the State Statistics Service notes that the rapid decline in international trade after the outbreak of full-scale war in the half-year section is partially mitigated by data for January and February, significantly higher than in 2021 (as last year’s pandemic restrained international trade).

The Verkhovna Rada supported the law introducing the necessary changes for the conclusion of a “customs visa-free regime” with the European Union. Thus, Ukraine has come closer to improving its customs legislation according to the European model. The introduction of “customs visa-free regime” will simplify the customs procedures and decrease the risks of corruption for Ukrainian business.

According to statistics from Opendatabot, a company that provides access to government data through major public registries, in the second quarter of 2022 the number of real estate transactions in Ukraine decreased by 8 times compared to the same period in 2021.

In the course of implementation of the Initiative on the Safe Transportation of Grain and Foodstuffs, as of August 17, 24 ships have already departed from Ukrainian ports. At present more than 600 thousand tons of agricultural products have been transported. Shipment of grain from Ukrainian ports is proceeding as planned, which confirms the positive dynamics of Ukraine’s export.

The aggravation of the situation at the Zaporizhzhia nuclear power plant remains on the agenda of the international community. In particular, NATO Secretary General Jens Stoltenberg stated that the presence of Russian troops on the territory of the Zaporizhzhia NPP creates significant risks of a nuclear accident for the world. He called for demilitarization of the plant and admission of IAEA specialists to it. President of France Emmanuel Macron expressed the same position in this regard, supporting an immediate dispatch of the mission of International Atomic Energy Agency to ZNPP.

Ukrainian President Volodymyr Zelenskyi continues the dialogue with international partners on expanding international support for Ukraine. He discussed with Danish Prime Minister Mette Frederiksen the provision of a new financial aid package and the tightening of the sanctions regime against the Russian Federation. The president also met with representatives of The Elders group of global leaders, former UN Secretary-General Ban Ki-moon and former Colombian president Juan Manuel Santos Calderón. The purpose of the meeting was to discuss the importance of communicating accurate information about Russian aggression in Ukraine to all countries of the world, as well as to engage expert opinion in further developing security guarantees for Ukraine.

In the context of attracting support in international organizations of a larger number of countries, Ukraine is stepping up interaction with a number of African states. In particular, Ukrainian President Volodymyr Zelenskyi held the first-ever talks with President Mohamed Bazoum of Niger and President Hakainde Hichilema of Zambia.

Ukraine continues to receive military aid from foreign partners. Six M109 howitzers and four helicopters (two Mi-17 and two Mi-2) arrived from Latvia to Ukraine; the latter were delivered to the Ukrainian Air Force in partially disassembled form. Also Latvia has resumed the program of rehabilitation of the wounded Ukrainian servicemen on its territory since August 15.

Within the framework of financial aid from international partners, Ukraine received €200 million of a soft loan from Italy. The funds will be used to cover the salaries of teachers of general secondary educational establishments.

The Verkhovna Rada of Ukraine has supported prolongation of martial law in Ukraine for 90 days – till November 21. MPs also voted for the extension of general mobilization.

Ukrainian President Volodymyr Zelenskyi signed a decree establishing an Advisory Council on the Deoccupation and Reintegration of the Temporarily Occupied Territory of Crimea and Sevastopol. The Ukrainian authorities demonstrate that they are not going to leave the struggle for the liberation of the peninsula and are not ready to compromise with Russia on this issue. Thus, it once again sends a signal that the ultimate goal for Ukraine is the full restoration of the territorial integrity of the state within the internationally recognized borders.