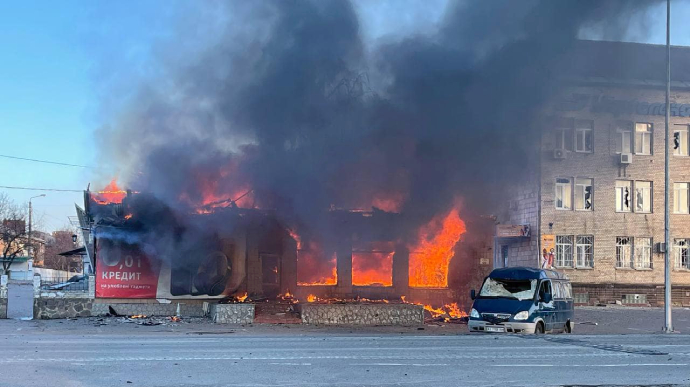 According to the National Police of Ukraine, four shells were dropped on transport infrastructure between the village of Piskivka and the village of Myhalky in Bucha district of the Kyiv region on the night of March 19.

Oleksandr Pavlyuk, head of the Kyiv Regional Military Administration, informed that the air defense of the Land Forces of Ukraine shot down a Russian Ka-52 attack helicopter over Kyiv region.

On March 19, Russian troops again shelled Novi Petrivtsi from Grads. This was reported by the police in the Kyiv region.

On March 19, in the morning in Korosten district of Zhytomyr region, a one-story building was completely destroyed by shelling and subsequent fire.

According to the Chernihiv Regional State Administration, on March 19, the shelling resulted in three fires at infrastructure facilities: a fuel and lubricants warehouse, a plastic products manufacturing plant, and storage facilities.

Chernihiv Mayor Vladyslav Atroshenko stated that the city’s second hospital had been bombed.

On March 19, shelling destroyed a residential building in the town of Rubizhne (Luhansk region). At least three people were killed, including two children, and one more child was wounded.

Near Popasna, the Ukrainian military shot down a missile fired from the Tochka U complex using a Stinger man-portable air defense system.

As a result of shelling of Kharkiv by Russian troops in some areas of the city (Pivnichna Saltivka and Velyka Danylivka) fires broke out. According to preliminary information from the Emergency Medical Center, there are dead and injured, including a child.

On March 19, bombs hit an apartment building, a service station and a lyceum building in Dergachi (Kharkiv region); two people were injured. Also, a residential house was shelled in the village of Bezruky in Dergachi district.

According to the Azov Regiment, their fighters conducted a raid, during which ammunition depots, enemy officers, and a platoon of enemy infantry were destroyed.

The General Staff of the Armed Forces of Ukraine said that the Ukrainian military destroyed a Ka-52 combat helicopter in Zaporizhzhia direction.

On 19 March, it became known that 9 people were killed and 17 others wounded as a result of two missile strikes on the outskirts of Zaporizhzhia, which had been carried out the day before.

BlackSeaNews editor-in-chief Andriy Klymenko reported that the Russian army had mined the sea routes from the Bosphorus to Odesa, and the seaport of Sochi was spreading misinformation about mines drifting allegedly due to Ukrainian forces.

In a national TV marathon broadcast, Vitaly Kim, head of the Mykolaiv Regional State Administration, stated that Russian troops were retreating from Mykolaiv.

According to the head of the Dnipropetrovsk Regional State Administration Mykola Lukashuk, Russian troops stopped the offensive in the direction of Kryvyi Rih. He also said that they were consolidating near populated areas in the Kherson region.

Oleksandr Vilkul, head of the Kryvyi Rih Regional Military Administration, said that the Russian military hit the village of Velyka Kostromka (Dnipropetrovsk Region) from the Grad MLRS. According to preliminary reports, there were no fatalities.

Yuri Ignat, spokesman for the Ukrainian Air Force, confirmed the Russian Defense Ministry’s statement about strikes on an underground rocket and aircraft ammunition depot of Ukrainian forces in Delyatyn (Ivano-Frankivsk region). However, the spokesman noted that he could not yet confirm information about the use of hypersonic missiles of the Kinzhal complex to strike the facility.

Russian Defense Ministry spokesman Igor Konashenkov claimed that members of the Azov Regiment allegedly plan to stage an attack in Lviv against diplomats from the United States and other Western countries in order to present it as a Russian attack.

On March 19, 8 of the planned 10 humanitarian corridors worked, and 6,623 people were evacuated.

According to the Office of the Prosecutor General, as of the morning of March 19, 112 children had died and more than 140 had been injured in Ukraine.

The press service of the Mariupol City Council reported that over the past week, several thousand Mariupol residents from the Left Bank district of the city, which is partially controlled by Russian troops, were forcibly deported to Russia.

From under blockages of the military barracks in Mykolaiv destroyed as a result of missile strike on March 18, got 50 bodies of casualties.

Human Rights Ombudsman Lyudmila Denisova visited Russian prisoners of war to verify their rights in accordance with the requirements of the Geneva Convention relative to the Treatment of Prisoners of War and stated that they had no complaints about the conditions of their detention.

Adviser to the Minister of Internal Affairs of Ukraine Anton Gerashchenko stated that among the most common crimes during the war are crimes against the lives of Ukrainians, state and municipal property, looting.

Secretary of the National Security and Defense Council Oleksiy Danilov asks representatives of the International Atomic Energy Agency (IAEA) to come to the seized Chornobyl and Zaporizhzhia NPPs to monitor compliance with safety standards.

According to the UN, at least 847 civilians were killed and 1,399 wounded during the war in Ukraine.

In an interview with RBC-Ukraine, Serhiy Haidai, head of the Luhansk Regional Military Administration, said that residents of populated areas occupied by Russian troops in Luhansk region staged pro-Ukrainian rallies. In response, the Russian military began shelling civilians and abducting activists at night.

Residents of Kherson region continue to protest against the temporary occupation of Russia. Pro-Ukrainian rallies took place in the village of Brylivka and Henichesk district of the region (Ivanivka village community).

According to the Ministry of Finance, about 30% of the Ukrainian economy does not work at all or temporarily.  Tax revenues do not cover the needs of the state, and the main channel of financing the state budget is internal and external borrowing.

Fuel prices began to fall at Ukrainian gas stations after the Verkhovna Rada passed a government bill to abolish the excise tax on fuel.

On March 18, President of Ukraine Volodymyr Zelensky made a video address to Swiss politicians and citizens. In his speech, Zelensky called for freezing the assets of Russians who waged war against Ukraine and influencing Swiss business, which does not want to leave Russia.

At the same time, the Swiss government has announced that it will implement a fourth package of EU sanctions, which includes a ban on the export of luxury goods to Russia.

UN Secretary-General Antonio Guterres has said that the Russian-Ukrainian war could lead to famine and the collapse of the global food system. The UN Secretary General called on the world to do everything possible to prevent this tragedy.

Polish Prime Minister Mateusz Morawiecki has called for a total ban on EU trade with Russia. Poland proposes to add a trade blockade to the existing package of sanctions as soon as possible. We are talking about seaports – a ban on entering ports under the Russian flag, with Russian goods, as well as trade by land.