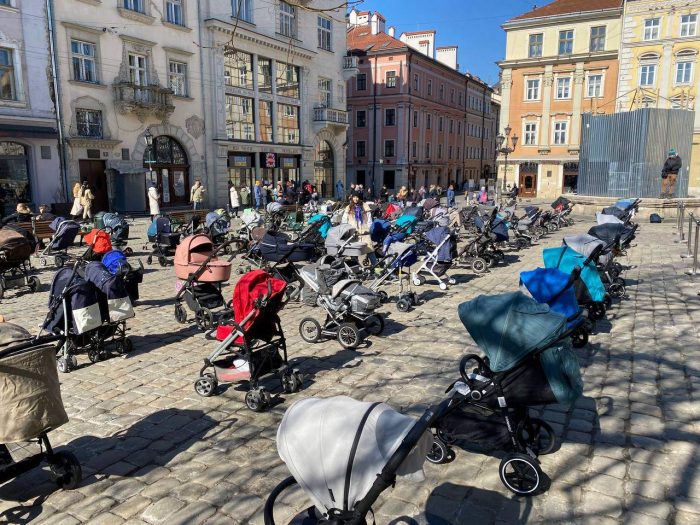 As of 8:00 a.m. on March 19, 2022, 119 civilians (not including casualties in Mariupol, Volnovakha, Sumy), including 2 children, were killed as a result of the Russian invasion in the past 24 hours, and 162 were wounded, including 7 children. 2 civilians were captured, and a total of more than 10 civilians were kidnapped or taken captive.

Since the beginning of the Russian full-scale military invasion of Ukraine, civilian objects and civilians have been the targets of shelling. In the past 24 hours alone, the Russian army fired 14 missiles and 40 airstrikes into Ukrainian cities. Bellingcat research agency created an interactive map of destroyed and damaged civilian objects as a result of Russian attacks. The map is available at the link: https://ukraine.bellingcat.com/.

The Mariupol city council estimates that Russian aircraft are dropping 50 to 100 bombs on the city every day.

As of the morning of March 19, locals were able to retrieve 130 survivors from the rubble of the Drama Theater, with a rough estimate of about 1,300 more people remaining in the theater basement. Rescue is becoming practically impossible due to constant bombardment by Russian aviation.

Verkhovna Rada MP Serhiy Taruta estimates that tens of thousands of Mariupol residents are currently buried alive under the rubble of 80% of the destroyed buildings in Mariupol.

As of March 18, Russia’s full-scale war against Ukraine’s population had killed 109 children and wounded more than 130, according to the Office of the Prosecutor General of Ukraine.

2 civilians were detained and taken prisoner:

1. Viktoriya Roshchina, a Ukrainian journalist from Hromadske, was abducted in Zaporizhzhia region. Her fate is unknown.

2. In Nova Kakhovka (Kherson region), Dmytro Vasyliev, secretary of the city council, was taken captive. His fate is unknown.

The day before, several people were taken prisoner (information to be clarified):

• rescuer of the State Emergency Service of Ukraine Oleksiy Danchenko;

Luhansk region – according to official information from Luhansk Military and Civil Administration, as of the morning of March 18, 59 civilians were killed in different cities of Luhansk region.

Severodonetsk, Rubizhne, and Kreminna (Luhansk oblast) – 4 people were killed and 10 wounded as a result of artillery shelling. 54 residential buildings were destroyed.

Kyiv – as a result of aerial bombardment of the city on March 18, 1 person was killed and 19 injured, among the wounded were 4 children. Rocket fire destroyed a school, a kindergarten and 6 residential buildings. Also wounded were 2 people – a father and a mother. The mother covered with her body an infant who was only 1 month old.

Makariv (Kyiv region) – 6 people were killed and 5 wounded as a result of artillery shelling.

Lviv – In the morning of March 18, the Russian army fired six cruise missiles at Lviv. The missiles were launched from the waters of the Black Sea. 1 person was wounded as a result of the shelling of the aircraft repair plant. Information about the injured is being clarified.

Zaporizhzhia – the suburbs were shelled by Smerch multiple rocket launchers, killing 1 person and injuring about 20.

Natalivka (Zaporizhzhia region) – 1 rescuer of the State Emergency Service died during reoccurring shelling and 5 workers were injured. They were killed during repeated firing while putting out a building fire.

Kramatorsk (Donetsk region) – Russian forces launched an air strike on the town, destroying residential buildings and an administrative building. According to preliminary information, 5 civilians were killed and 26 injured.

Avdiivka (Donetsk region) – 2 people were killed as a result of Grad multiple rocket launchers firing at a multi-story residential building, a store, and an administrative building. 4 civilians were wounded, including 1 child.

Kharkiv – as a result of rocket attacks on an educational institution and residential buildings, according to preliminary information, 1 person was killed and 12 wounded. Also, as a result of the shelling of the city center, a well-known volunteer, Elia Shchemur, was killed.

Kharkiv region – at least 13 civilians were killed in the region overnight, including 1 child.

Zavody (Izyum district, Kharkiv region) – as a result of artillery shelling of residential buildings killed 4 people – a family, including a boy of 11 years old. 1 person was wounded.

Chernihiv – Russian military fired on civilians right in the street, some of them were standing in line for water, killing 14 Chernihiv residents.

Bezdryk (Sumy region) – On March 17, one young girl, a student of Sumy State University, was killed by Russian troops shelling a convoy of civilian cars moving between the populated areas of Sumy region. Several people were injured.

Mykolaiv region – 47 civilians, including 1 child, were wounded as a result of air and artillery fire.