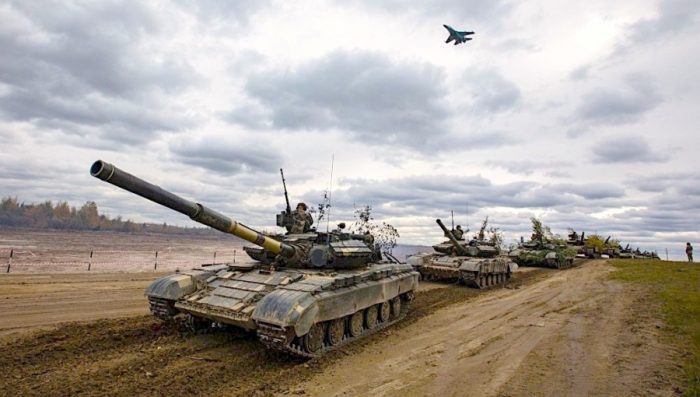 In the east of Ukraine, Russian troops launched an offensive operation to encircle the Ukrainian Armed Forces grouping in the area of the Joint Forces Operation, establish full control over the territories of Donetsk and Luhansk regions, and maintain a land corridor with the temporarily occupied Crimean Peninsula. At the same time, missile strikes are carried out against infrastructure facilities in the western regions of Ukraine.

The mayor of Vasylkiv (Kyiv region), Nataliia Balasynovych, reported the explosions in the town. According to her, they were the result of Ukrainian air defenses.

According to the Kharkiv Regional Military Administration, 9 people were killed and 25 wounded in the region on April 17. On April 18, the shelling persisted throughout the day, targeting Kharkiv’s Osnovianskyi and Nemyshlianskyi districts, as well as the central part of the city. As a result of the shelling, 3 people were killed and 15 wounded (including a 14-year-old child).

Near Izium, Russian troops are conducting offensives on the left bank of the Siverskyi Donets River.

In Luhansk region, Russian troops are advancing in the Popasna and Sievierodonetsk directions. The head of the Luhansk Regional Military Administration, Serhii Haidai, stated that they had entered Kreminna and fully occupied the city. He subsequently informed that a civilian vehicle was fired upon in that locality, killing 4 people and wounding 1. He also said that on the evening of April 17, the patrol police building in Lysychansk was damaged by shelling, and 6 officers were hospitalized.

According to Pavlo Kyrylenko, head of the Donetsk Regional Military Administration, at least 8 residential buildings, educational and infrastructure facilities were destroyed as a result of the rocket attack on Kramatorsk. Intense shelling also continued in the areas of Marinka, Avdiivka, and Ocheretyne. As a result of Russian shelling in Donetsk region 4 civilians were killed (2 in Torske, 1 in Shandryhalove, 1 in Rozdolne) and 5 more were wounded.

According to the General Staff of the Armed Forces of Ukraine, Russian troops have also become more active in the Zaporizhzhia direction. Zaporizhzhia Regional Military Administration reports fighting and intense daily shelling near Huliaipole.

The Dnipropetrovsk Regional Military Administration reported that on the morning of April 18, the Russian army launched a missile strike on the Dnipropetrovsk region. Some of the missiles were shot down by Ukrainian air defense systems, one missile hit an infrastructure facility in the Synelnykove district (2 people were injured), and another destroyed the railway infrastructure in the Pavlohrad district.

According to the Operational Command “South”, Russian warships that blockaded the Ukrainian Black Sea coast have retreated almost 200 km. But the threat of blocking and rocket attacks persists.

Russian troops seek to reach the administrative borders of the Kherson region. There are ongoing battles in the area of Oleksandrivka and the shelling of civilian objects in Mykolaiv.

Russian forces launched missile strikes against Lviv. According to Maksym Kozytskyi, head of the Lviv Regional Military Administration, three strikes were directed at military infrastructure facilities, and one at a technical service station. Rockets have been recorded falling near railway facilities. According to preliminary information, 7 people were killed and 11 injured (1 child was among the wounded).

The Center for Countering Disinformation at the National Security and Defense Council warns of possible preparation of provocations by Russian troops during the Easter holidays. Russian propaganda is spreading fake information about the preparation of so-called “special mobile groups of Ukrainian nationalists”, which can allegedly bombard Orthodox churches on Easter. Such information can be used as a cover for possible shelling of religious sites in Ukraine by Russian troops.

Minister for Reintegration of the Temporarily Occupied Territories Iryna Vereshchuk reported that humanitarian corridors did not work due to Russian shelling on April 18. Ombudsman Liudmyla Denisova confirmed that the Russian military disrupted evacuations by shelling vehicles used by people trying to leave the war zone.

The Office of the UN High Commissioner for Human Rights recorded 4,890 civilian casualties in Ukraine as of April 17. 2,072 people were killed and 2,818 injured as a result of the Russian invasion. Juvenile prosecutors report that more than 567 children (205 children killed, more than 362 injured) suffered as a result of the Russian Federation’s large-scale armed aggression in Ukraine.

Ombudsman Liudmyla Denisova notes that the actions of the Russian army in Mariupol constitute an act of genocide against the Ukrainian people, in accordance with the Convention on the Prevention and Punishment of the Crime of Genocide and Article 6 of the Rome Statute of the International Criminal Court. Of particular concern now is the intention of the Russian military to storm the territory of the Azovstal plant, where at least 1,000 civilians are hiding.

Petro Andriushchenko, adviser to the mayor of Mariupol, reports that as of April 18, Russian troops are holding at least 27,000 people, who are residents of Mariupol and the surrounding area, in “filtration camps”.

Minister for Reintegration of the Temporarily Occupied Territories Iryna Vereshchuk states that Russian troops have taken about 1,000 Ukrainian civilians hostage. Journalists, activists, volunteers, opinion leaders, and priests are being tortured.

Zaporizhzhia Regional Military Administration reports that 155 cases of abduction of Ukrainian citizens by the Russian military have been recorded on the territory of the region. 86 hostages have already been released. Another 69 people are being held captive. Among them are representatives of local authorities, private entrepreneurs and heads of institutions and organizations.

The wife of the former mayor of Kherson, Volodymyr Mykolaienko, reported that the Russian military had kidnapped her husband.

In the temporarily occupied territories of Donetsk and Luhansk regions, active hostilities disrupted the water supply process and the work of water supply utilities. Ombudsman Liudmyla Denisova indicated that in most settlements the civilian population has practically no access to drinking and running water.

The government has allocated the first 600 million UAH to pay monthly allowances to internally displaced persons.

The Office of the President reports that following a meeting between Volodymyr Zelenskyi, representatives of the Office of the President, the government and parliament, a plan for Ukraine’s post-war renewal and development has been prepared. It includes covering the material damage caused by the war, restoration of destroyed infrastructure facilities and structural modernization of the Ukrainian economy.

According to the Managing Director of the Deposit Guarantee Fund Svitlana Rekrut, the Cabinet of Ministers supported the proposal of the National Bank of Ukraine to nationalize 26 billion UAH of assets of Russian banks that were withdrawn from the Ukrainian market.

State-owned Oschadbank ended the first quarter of 2022 with a profit of over 240 million UAH.

President Volodymyr Zelenskyi handed over to Matti Maasikas, the head of the EU Delegation in Ukraine, the first part of the completed questionnaire which is required for obtaining the EU membership candidate status. Deputy Prime Minister for European and Euro-Atlantic Integration of Ukraine Olha Stefanishyna informed that work on the second part of the questionnaire was already in progress. According to Maasikas, Ukraine’s answers will be analyzed very quickly, and a meeting of the European Council on the issue is expected as early as June.

In addition, Volodymyr Zelenskyi continued his dialogue with Lithuanian President Gitanas Nausėda. The President of Ukraine reported about the developments on the front (defence of Mariupol from Russian troops), and also expressed his hope for increased security support for Ukraine at the EU level.

Josep Borrell, High Representative of the European Union for Foreign Affairs and Security Policy, issued a statement condemning the chaotic and illegal shelling of civilians and civilian infrastructure by the Russian armed forces in Ukraine in recent days. The statement mentioned strikes on Sievierodonetsk, Lysychansk, and Popasna in the Luhansk region; Kharkiv and Lviv as examples.

U.S. Secretary of Defense Lloyd Austin had a telephone conversation with Romanian Minister of National Defense Vasile Dîncu, discussing joint efforts to provide support to Ukraine against the backdrop of Russian aggression, as well as NATO cooperation. Both sides recognized the urgency of supporting Ukraine in the face of a potential Russian offensive in the east and the relevance of providing defense and humanitarian assistance to Ukraine by the Alliance.

Turkish President Recep Tayyip Erdoğan stated that Turkey would continue to make all necessary efforts to end hostilities in Ukraine. Erdoğan assured that Turkey will support the required result of the Russian-Ukrainian talks in Istanbul on the basis of preserving the territorial integrity and sovereignty of Ukraine.

According to the Ministry of Foreign Affairs of Ukraine, the diplomatic missions of the EU and 16 states (France, Italy, Latvia, Lithuania, Estonia, Poland, Turkey, the Czech Republic, Slovenia, the Vatican, Moldova, Georgia, Iran, Kazakhstan, Tajikistan and Turkmenistan) resumed work in Kyiv on April 18.