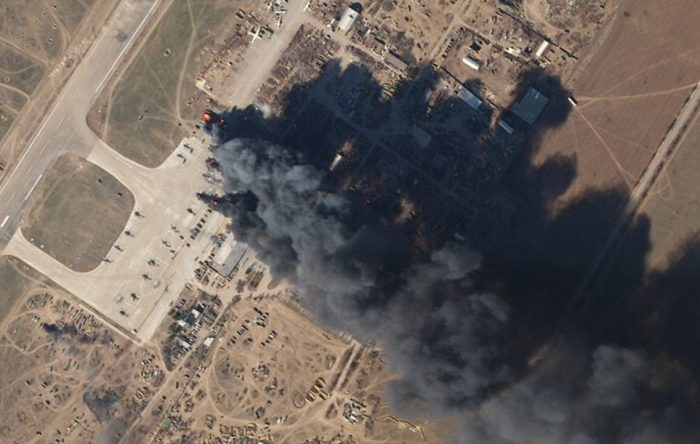 Since the onset of Russia’s invasion of Ukraine, the Armed Forces of Ukraine have managed to liberate more than 30 populated areas in Kyiv region, which had been temporarily seized.

The Armed Forces of Ukraine General Staff noted that on the southern direction, Russian troops are building up their logistic support system and are not taking active offensive actions.

Oleksandr Gruzevych, Deputy Chief of Staff of the Land Forces Command of the Armed Forces, said that on the right bank of Kyiv, the AFU had pushed back units of Russian troops 70 kilometers from the capital. Work is also under way to strengthen the third, distant ring of Kyiv’s defenses.

In the morning of March 18, a residential area in the Podilskyi district of Kyiv was shelled. As a result of falling fragments of a downed rocket 6 houses were damaged, 1 person was killed and 19 more were injured, among them 4 children.

As a result of the shelling of the city of Makariv (Kyiv region) on March 18, 6 people were killed and 5 others were injured. This was announced by First Deputy Chairman of the Kyiv Regional Council Yaroslav Dobriansky.

According to the State Emergency Service of Ukraine, on the night of March 18, as a result of artillery shelling in the village of Zalissya (Zhytomyr region), two residential buildings and an outbuildings were damaged.

The press service of the Operational Command “North” stated that in the past 24 hours the Armed Forces of Ukraine repelled two offensive attempts by Russian troops near Chernihiv.

In the morning of March 18, the Ukrainian Armed Forces destroyed a “Thorne” electronic reconnaissance complex near Chernihiv and a command and surveillance post of a battalion tactical group of Russian troops.

On March 18, around 16:00, a warehouse building with paint products caught fire as a result of artillery fire in the city of Sumy. Preliminarily there were no victims or casualties.

According to the head of the Sumy Regional State Administration Dmytro Zhyvytskyy, a hospital in the town of Trostyanets (Sumy region) was shelled.

The State Emergency Service reported that in the morning of March 18 in Kharkiv, as a result of shelling, the academic building of a higher educational institution suffered heavy damage, as well as two neighboring residential buildings were damaged. 1 person was killed and at least 12 people were injured.

On March 18, a family of 3 adults and 2 children died as a result of shelling in the village of Zavody in Izyum district (Kharkiv region).

Around 15:00, Serhiy Haidai, the head of the Luhansk Regional Military Administration, reported that the Russian military fired 10 shells at a hospital in Lysychansk (Luhansk Region).

According to Ivan Arefiev, the speaker of the Zaporizhzhia Regional Military Administration, in the morning of March 18 there was a mass shelling of a military training ground and one of the factories and an adjacent quarry in the suburbs of Zaporizhzhia using “Smerch” multiple rocket launchers.

According to the head of the Donetsk Regional Military Administration Pavlo Kyrylenko, after the morning rocket attack on Kramatorsk there were 25 wounded, 5 people were killed. There was also shelling of Avdiivka village, as a result of which 3 people were wounded and 2 more were killed. In Pokrovsk, the shelling of cluster munitions killed 1 person, 6 were wounded.

The Russian military was partially successful in the Donetsk direction as they temporarily deprived Ukraine of access to the Sea of Azov, according to the Armed Forces of Ukraine General Staff.

In the afternoon of March 18, rocket attacks were launched against Mykolaiv. At least 40 Ukrainian servicemen were killed as a result of rocket strikes on the headquarters of the 79th Air Assault Brigade.

Air Command South reported that around 06:00, an anti-aircraft missile unit of the Ukrainian Armed Forces shot down a Russian sea-launched cruise missile in Odesa region.

Oleksiy Arestovych, advisor to the head of the presidential office, reported that the Ukrainian military shelled the airfield in Chornobayivka twice a day. The General Staff of the Ministry of Defense of Ukraine confirms that as a result of the first shelling, the command post of the 8th Combined Arms Army of the Russian Southern Military District was destroyed. Russian planes and helicopters were also destroyed and damaged. Lieutenant General Andrey Mordvichev, commander of the 8th Combined Arms Army of the Southern Military District of the Russian Armed Forces, was killed in the shelling.

In the morning, Serhiy Borzov, the head of the Vinnytsia Regional Military Administration, said that the Ukrainian air defense had shot down three cruise missiles in the Vinnytsia region.

According to Lviv Mayor Andriy Sadovyi, a rocket attack on Lviv took place on the morning of March 18. Maksym Kozytskyi, head of the Lviv Regional Military Administration, spoke about 6 cruise missiles fired from the Black Sea, 2 of which were destroyed by Ukrainian air defenses and the other 4 hit the Lviv State Aircraft Repair Plant near Danylo Halytsky International Airport in Lviv. One person was injured.

During the next briefing of the Ministry of Defense of the Russian Federation, fake information was voiced that the Security Service of Ukraine allegedly mined a city hospital in Dnipro and plans to blow up a building when a Russian plane flies over the city.

During the day, massive DDoS attacks were carried out on the Invaders-rf website, which contains all available information about Russian prisoners: their names and surnames, ranks, locations, etc.

The humanitarian situation in the cities of Mariupol and Sumy is catastrophic;  urban dwellers face a critical shortage of food, water and medicine. The Office of the United Nations High Commissioner for Refugees (UNHCR) reports that humanitarian needs in eastern Ukraine are becoming more acute. More than 200,000 people are currently deprived of access to water in several settlements in the Donetsk region, while constant shelling in the Luhansk region has destroyed 80% of some settlements, leaving 97,800 families without electricity.

People continue to be rescued from under the destroyed Mariupol Drama Theater, there is no information about the dead. More than 1,300 people remain under the rubble.

Dmytro Vasyliyev, secretary of the Nova Kakhovka city council, was taken prisoner and detained in a pre-trial detention center. The head of the Kharkiv Regional State Administration Oleh Synegubov stated that the Russians had released the village head of the Velykoburlutsk community, Viktor Tereshchenko, who was in hospital. NGOs led by the Ukrainian Helsinki Human Rights Union have published an appeal to the international community regarding the abductions and executions of Ukrainian activists, journalists, and local government officials, providing a complete list of abductees.

“As of March 18, 1,833 criminal cases have been opened on the facts of war crimes committed by the Russian army during the war in Ukraine,” said Verkhovna Rada Commissioner for Human Rights Lyudmila Denisova.  In addition, according to her, the Ombudsman’s Office has been receiving complaints from Ukrainians since the beginning of hostilities in Ukraine about violent crimes committed by the Russian military, including sexual freedom and sexual integrity.

As of March 18, 109 children had died and more than 130 had been injured since the start of the war in Ukraine, according to the Prosecutor General’s Office. The head of the State Service for Ethnopolitics and Freedom of Conscience, Olena Bohdan, said that since the beginning of the new stage of the war, 44 religious buildings, mostly Orthodox churches, have been destroyed in 7 regions of Ukraine. Since the beginning of the war, 222 people have died and 889 have been injured in Kyiv. The World Health Organization has recorded 45 attacks on Ukrainian medical facilities since the start of the war.

According to the Office of the United Nations High Commissioner for Refugees, more than 3.2 million Ukrainians have become forced refugees abroad.

The State Special Communications Service said that the official website of the Center for National Resistance was created by the SSO of the Armed Forces of Ukraine to support and coordinate all those who want to fight for the liberation of Ukraine from Russian invaders.

The Prime Minister of Ukraine Denis Shmygal held talks with the Prime Minister of France Jean Castex and called on France to intensify and impose tough sanctions on Russia in connection with its military invasion of Ukraine. These include suspending access to European ports for Russian ships, suspending economic cooperation, abolishing existing Schengen visas issued by France to Russian citizens, and so on.

On March 18, US President Joe Biden had a telephone conversation with Chinese leader Xi Jinping about the war in Ukraine. The American leader described the consequences that Beijing will face if it provides material support to Russia in the war against Ukraine. Biden stressed that he supports a diplomatic solution to the conflict. Xi Jinping said that conflicts and confrontations similar to Russia’s war against Ukraine were not in anyone’s interests. The Chinese President added that both countries should steer bilateral relations in the right direction, and each of them should assume due international responsibility and make efforts for world peace.

The international human rights organization Reporters Without Borders has filed a lawsuit against Russia in the International Criminal Court (ICC) in The Hague. The organization calls on Chief Prosecutor Karim Khan to investigate crimes committed by the Russian armed forces against media workers during the invasion of Ukraine.

Norway has joined the European Union’s sanctions against the Russian Federation, which will include personal restrictions against certain influential Russians and Belarusians, as well as a ban on exports of technology, goods and services that Russia can use to wage war against Ukraine.

Several European countries expelled Russian diplomats on March 18. Bulgaria has declared 10 Russian diplomats non-grata, it is suspected of intelligence activities. Countries such as Latvia, Estonia and Lithuania, also joined the initiative to expel Russian diplomats on the same day. All diplomats are accused of undermining national security and spreading propaganda.  In addition, on March 18 it became known that diplomats and civil servants of Russia and Belarus were banned from entering the European Parliament. The President of the European Parliament, Robert Metzol, said that “there is no place in the House of Democracy for those who want to destroy the democratic order.”

The information in the digest is collected from official sources — reports of state authorities of Ukraine, Ukrainian and international news agencies.  The accuracy of the data is carefully checked by the project team and corrected in case of fake news.